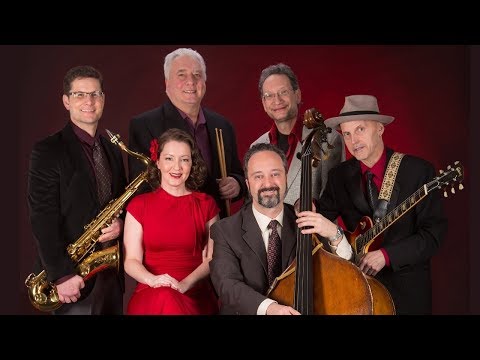 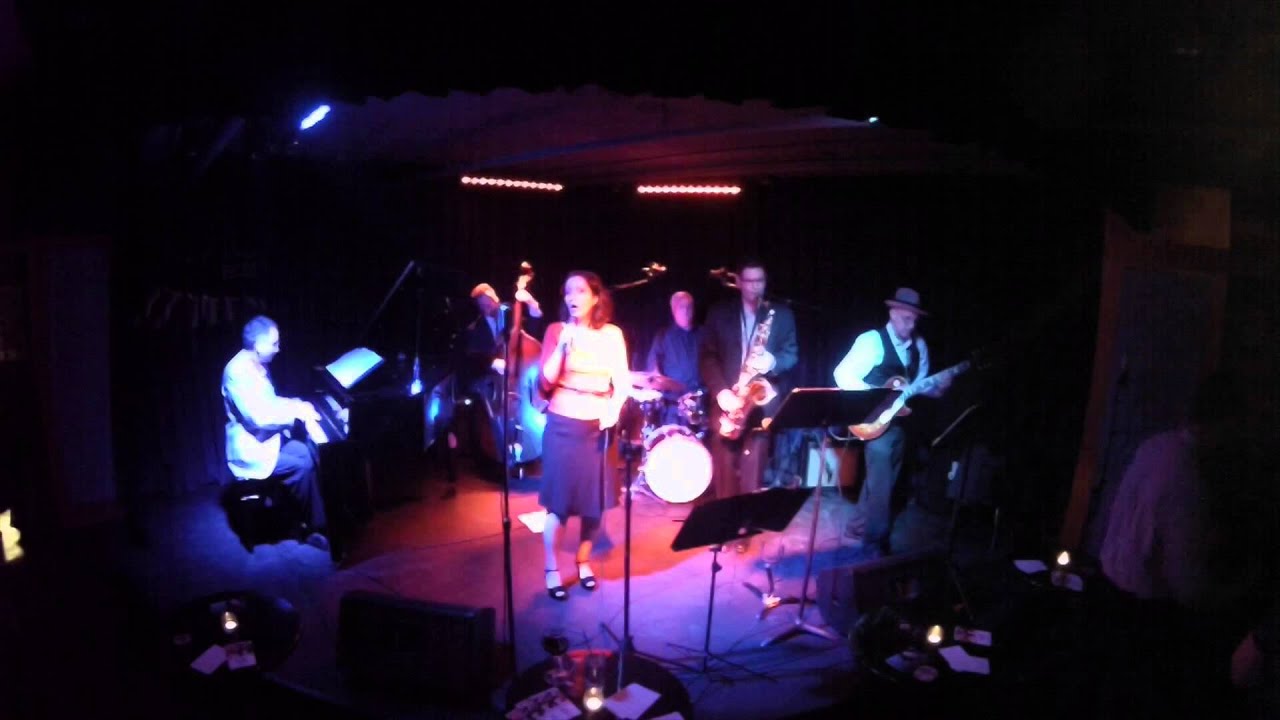 One Mint Julep - Live at Blu 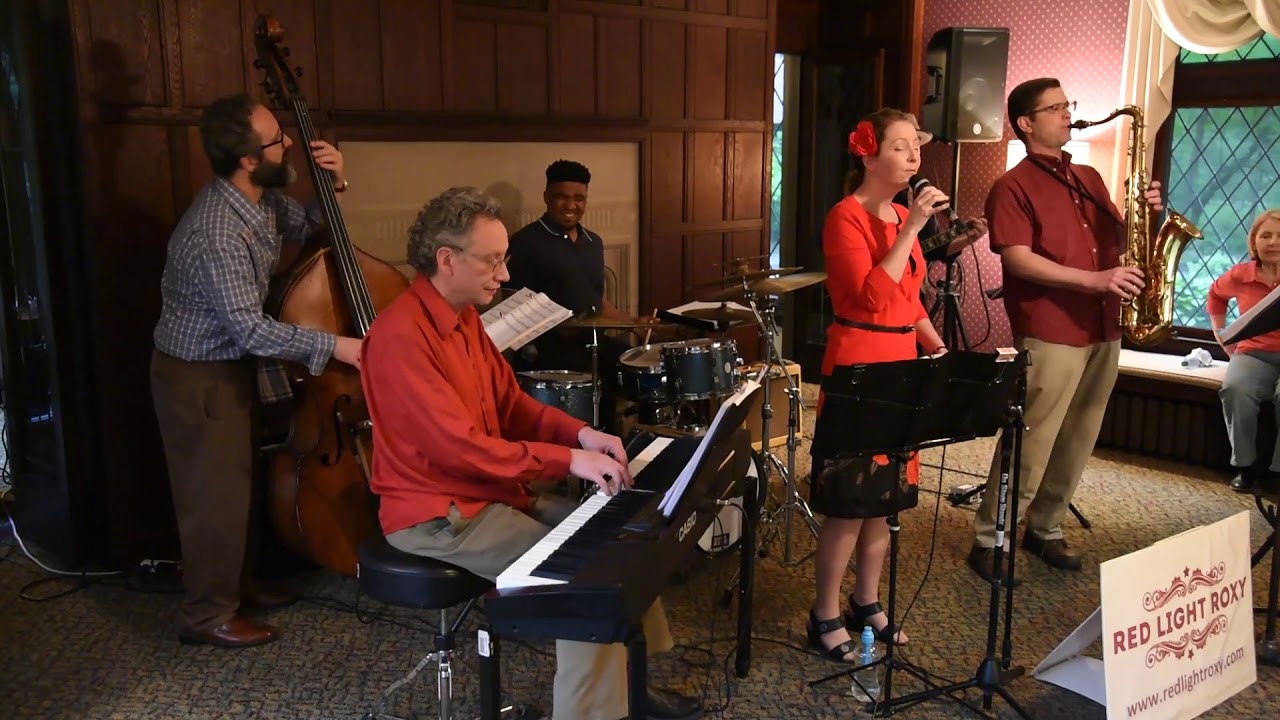 All Right, Ok, You Win 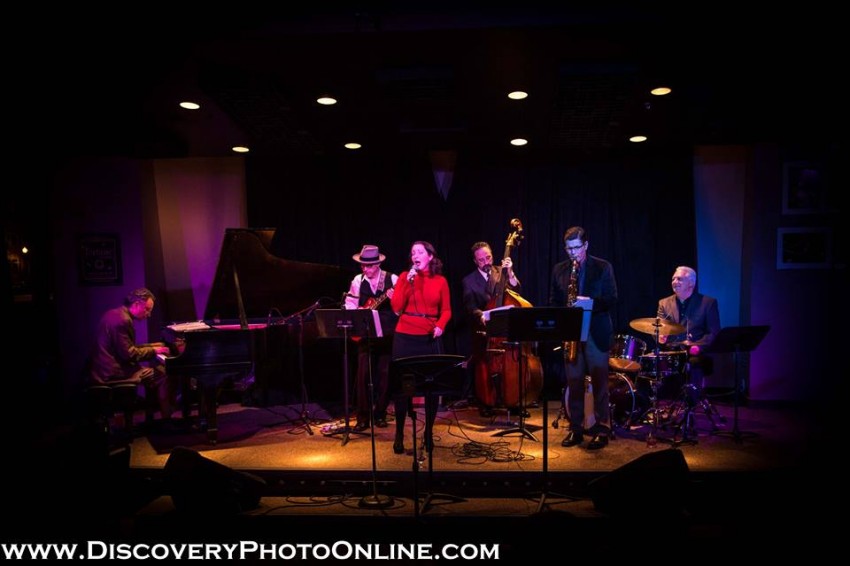 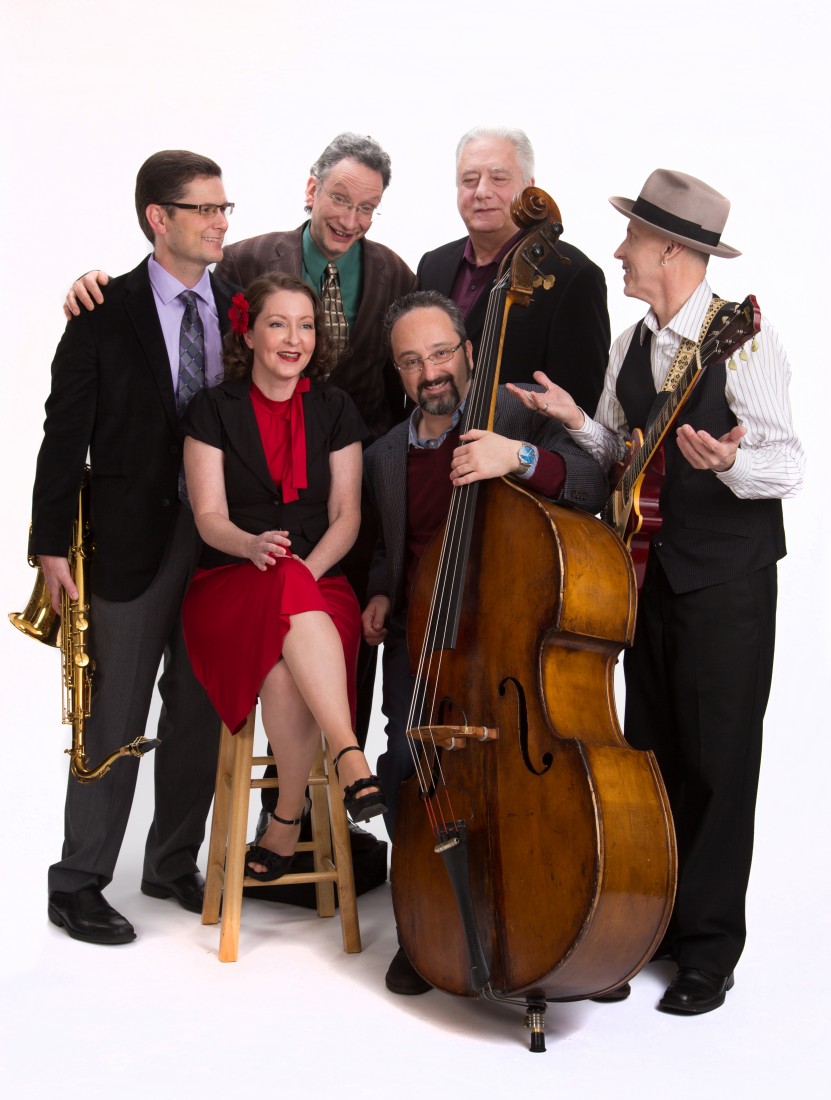 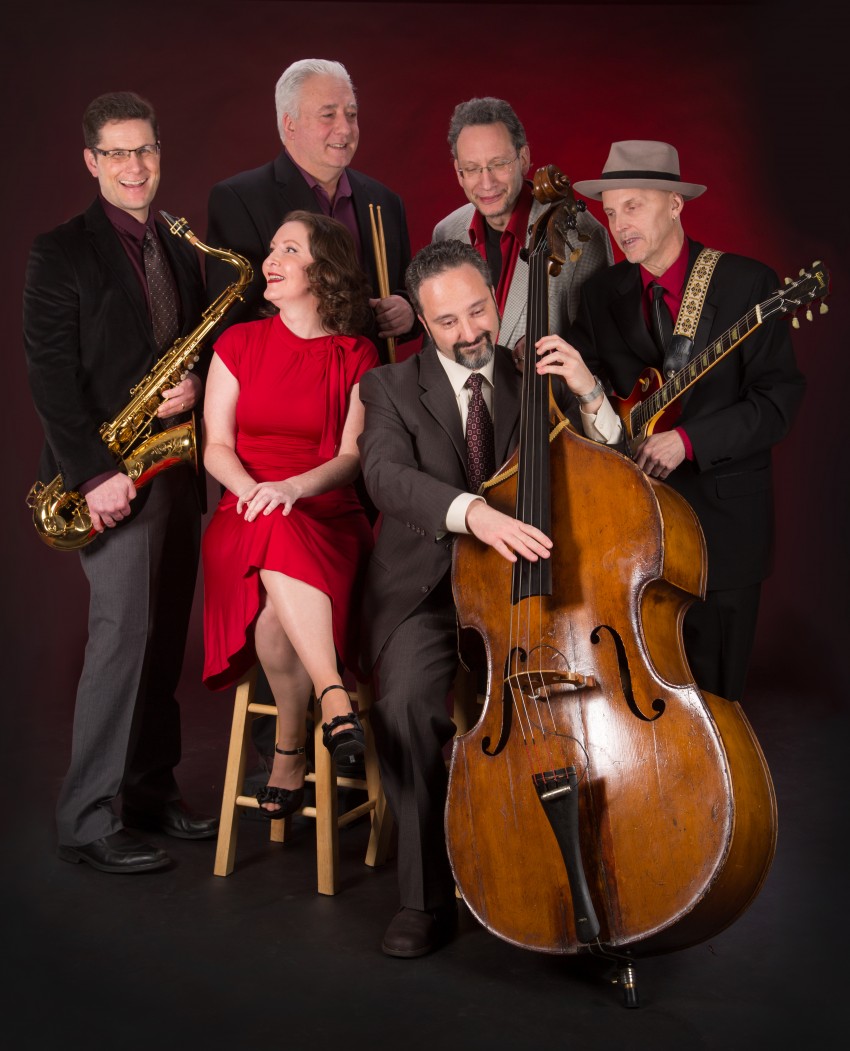 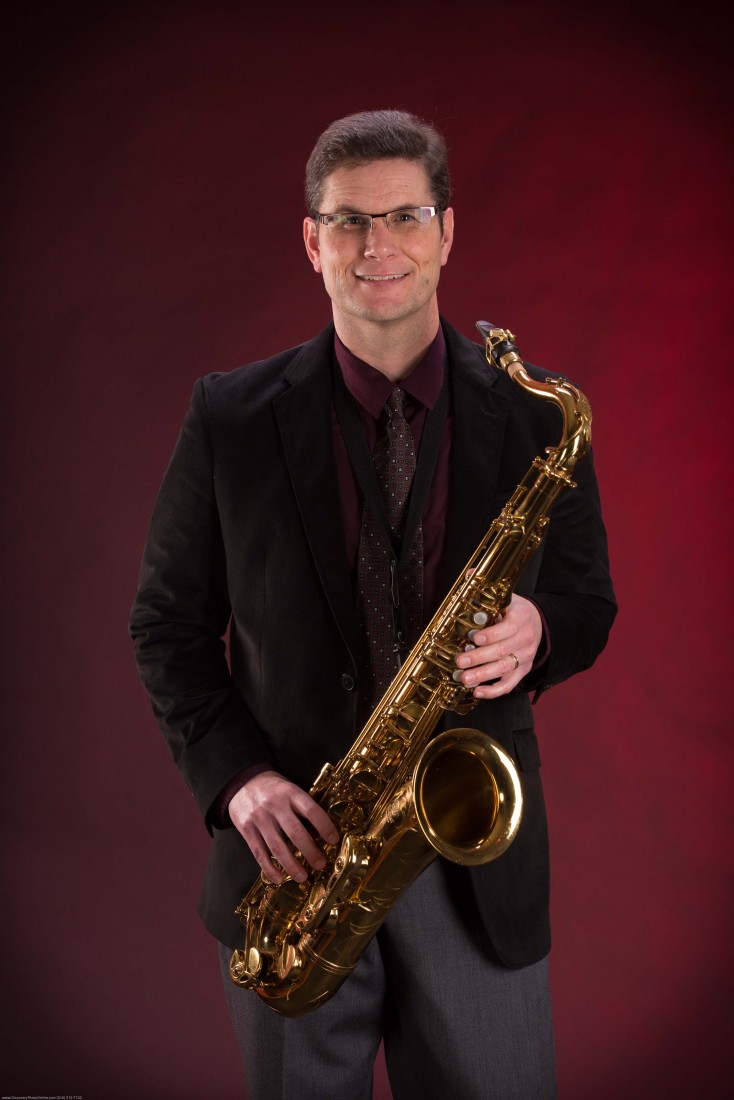 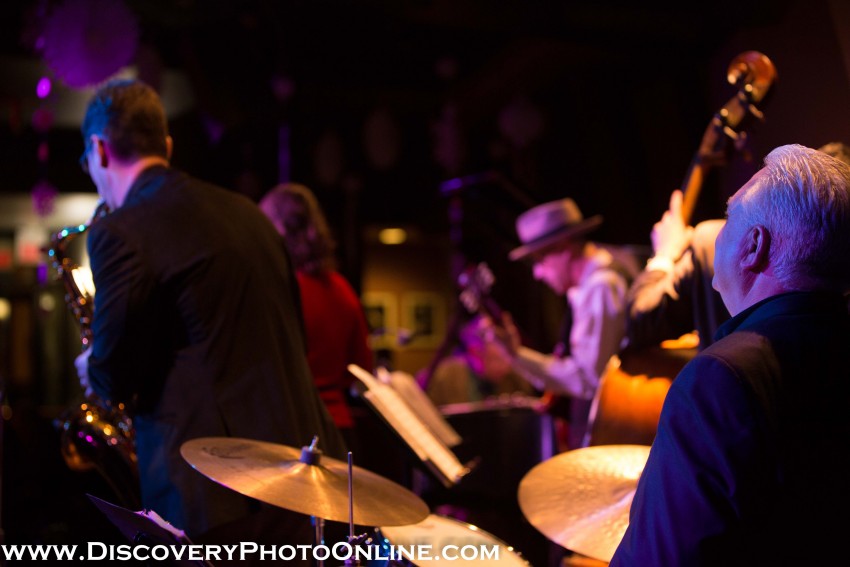 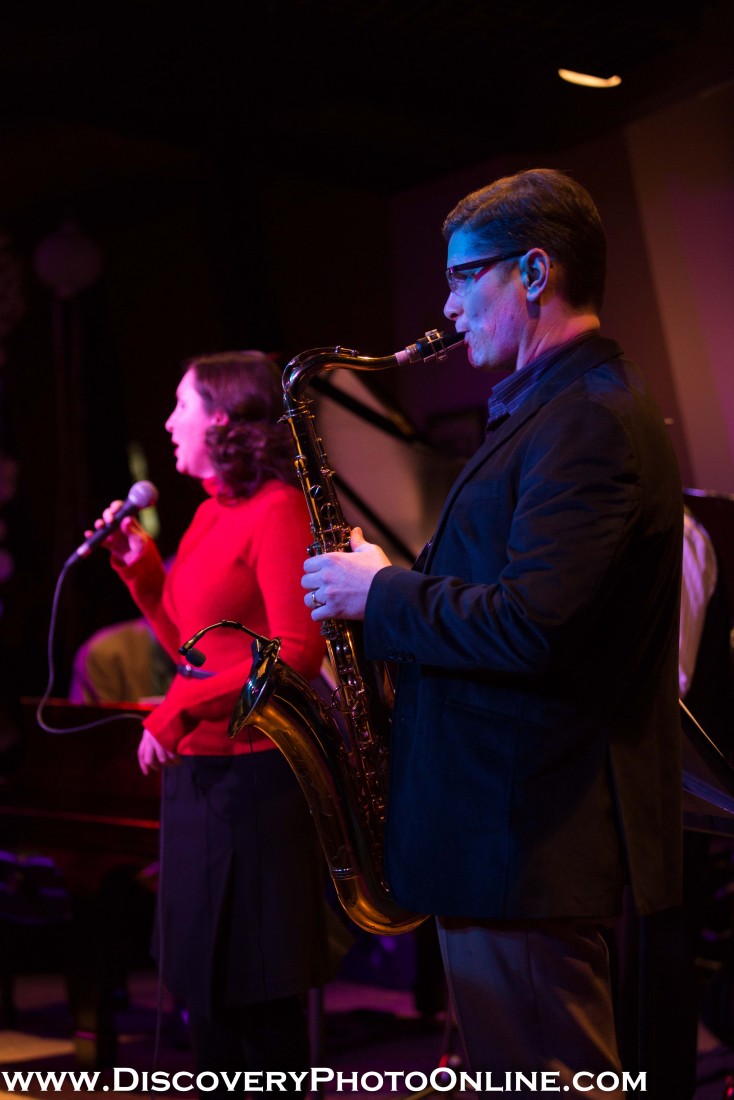 Red Light Roxy is a professional jazz group from Cleveland, OH that plays an upbeat mix of jazz standards, jump blues, swing, boogie-woogie and a dash of old-school R&B. Its repertoire comes from the Great American Songbook and includes familiar songs made famous by such legendary performers as Ella Fitzgerald, Ruth Brown, Frank Sinatra, Peggy Lee, Nat King Cole, Ray Charles and Louis Armstrong. The group can also be reduced to a quartet or trio to match your musical needs and budget. There are no artistic egos at work here, just the desire to provide you with enjoyable, headache-free music. For a quality and professional musical experience, there is no better choice than Red Light Roxy.

Red Light Roxy was perfect for our Roaring 20’s benefit fund raiser. From their attire to the music, they helped make our guests feel like they stepped back in time. Their volume was perfect, too. Guests could talk to each other at the table and could hear each other!
Thanks for a great night.

I think your event was a big success. Everyone looked great in their outfits.
Happy Holidays and thank you for having live music.

Upon their arrival one knew the level of specialness of the event went higher. Gracious, engaging, with the necessary touch of humor, these professionals could not have been better. Their music was magical. They’re interpretation of the songs was way above the norm. Close your eyes… and you think you’re with Count Basie. Thank you for EVERYTHING!

Thanks Peter! That was a special night. A great way to honor your friend.
Best,
Dave

Amazing to Work With!

We had an awesome event. Dave and the band were amazing to work with, showed up early, were super flexible and helpful at the venue and during the event. We would recommend them for anything. Bonus: They have such a great sound and are so easy to listen to.

Thank you, Jess. That was fun. Good luck with everything going forward.

You guys really made our night. The reception was perfect with you there. We appreciate everything so much!

Thanks David. Your wedding was a lot of fun. Congratulations to you and Stephanie!

It was a pleasure to have Dave from Red Light Roxy play solo saxophone for our holiday party! His music added so much to the evening. Our guests enjoyed his music and we received compliments all night long. Dave is very talented, professional, and very easy to work with. A highlight of the evening was when Dave played Jingle Bells and our 11 year old nephew followed along on his saxophone. He had only been playing for 2 months and Dave helped him sound like a pro! He also gave him some great pointers. Dave went above and beyond in every way. Highly recommend!

Thanks Carolyn! That was fun. Happy New Year to you and your family.

While the full band would have been too large for our event, we were able to book three members of Red Light Roxy to form a jazz trio (sax, bass, piano) for our firm’s holiday cocktail reception. The trio provided a full array of music, receiving many compliments from those in attendance. Dave Sterner, the group’s contact, is a true professional in all respects. He listens to client needs, and is responsive, reliable and flexible. As an Event Coordinator, I highly recommend working with Dave and Red Light Roxy to plan your next event. Not only are the musicians in this group talented, they are a pleasure to work with.

Thank you Rosanne. It was a pleasure to play for you. Happy Holidays!

It was easy to work with this band. The members were on time, prepared, gracious, and played beautifully. They made my event a top notch event. Really talented musicians. I hope I can see them at a swing event sometime. I highly recommend red Roxy!

Thank you Leslie for letting us be a part of it. The best to you and your family. - Dave

Red Light Roxy was incredible! As they played throughout the night, all of our guest constantly came up to me to compliment the band. They really sounded outstanding. The band was super accommodating and extremely easy to work with. I can't recommend them enough.

Thanks Max!! That was a lot of fun. Good luck with everything.

Outstanding Swing Band! This band is the real deal!

I hire Red Light Roxy multiple times a year for my events. I couldn't be more happy with Red Light Roxy! They are all amazing musicians and super easy going professionals. They are perfect for any event. Want people to easily mingle at your next event? Hire a REAL swing band! Red Light Roxy delivers. They will get the crowd up on their feet and out on the dance floor. They play all of your favorite tunes from the swing era. EVERYONE will be pleased! Guaranteed!

Thanks Valerie! Your swing dances are always top notch. http://gethepswing.com/ Look forward to playing for you in the future. Best Regards, Dave

Red Light Roxy is a professional band from Cleveland, Ohio that plays an upbeat mix of jazz standards, jump blues, swing, boogie-woogie and a dash of old-school R&B. Its repertoire comes from the Great American Songbook and includes familiar songs made famous by such legendary performers as Ella Fitzgerald, Ruth Brown, Frank Sinatra, Peggy Lee, Nat King Cole, Ray Charles and Louis Armstrong. Red Light Roxy has played at the Tri-C JazzFest, Wade Oval Wednesdays, Cain Park, Akron’s LOCK IV, the Shaker Heights Art and Music Festival, Legacy Village, Nighttown, Blu Jazz and a variety of city summer concerts and swing dances, as well as private events. If you’re looking for an authentic experience and the music has got to be swingin’, it’s got to be Red Light Roxy.

As a 6 piece group, Red Light Roxy can be "the show", a dance band, or simply provide a backdrop to your event. The group can be reduced from 6 pieces to a solo piano, and anything in between, depending on budget, space, and volume considerations. The group can provide it's own "sound" or work with whatever sound company is in place.

Led by veteran saxophonist Dave Sterner with 20+ years experience performing, recording and leading musical groups throughout the region. Dave Sterner is a part-time faculty member at Cuyahoga Community College’s jazz program and Lakeland Community College, where he directs the Lakeland Civic Jazz Orchestra and co-directs the Lakeland Jazz Fest. He has released two CDs under his own name and appears as a featured performer with other recorded groups, including the Fat Tuesday Big Band and the N. Glenn Davis Quartet/Quintet.

Vocalist Eileen Burns has performed in numerous Cleveland theatrical productions on stages including Weathervane Playhouse, Cassidy Theater and Playhouse Square. She also appeared regularly on the Mighty Wurlitzer Radio Hour on WCLV singing standards and Broadway show tunes in an old-time radio format. In 2012 she was the female vocalist for the World Famous Glenn Miller Orchestra and toured with the band for a year. During that time, she sang at sold-out concert halls throughout the world. Highlights included performing with the Indianapolis Symphony, a 4-day concert series at Busch Gardens, a Crystal Serenity cruise to Portugal, several engagements on the Mississippi riverboat American Queen, a 3-week tour of Quebec and a month-long tour of Japan. She is featured on the GMO’s 2013 album, “In The Mood.”

Joe Hunter has been playing piano professionally since 1978 and his versatility has garnered him work with an array of artists. He attended Cleveland State University where a 1979 exchange program in Rio De Janeiro fueled his fascination for Brazilian rhythms.He returned to Brazil in 1981 to study at the Universidade Gamma Filho. From 1987 to 1996 he served on the Conservatory of Music faculty at Capital University in Columbus, Ohio, He has performed with many national artists including Conti Condoli, Tito Puente, and Scott Hamilton, and is a favorite at many JazzFest events. Joe has been with the Tri-C Jazz Sudies program for several years and is co-host of the popular Song Is You! Series produced by Tri-C JazzFest.

Glenn Davis is a drummer, recording artist, composer, and educator who currently leads his own jazz quartet and quintet. Glenn’s exciting ensembles feature a unique blend of jazz styles and engaging original compositions and arrangements. Glenn holds a Bachelors of Music degree from The Berklee College of Music and has a Masters of Music Education from The University of Akron. Glenn has performed with many notable musicians such as, Mike Stern, Phil Woods, Benny Golson, Mundell Lowe, Houston Person, Ken Peplowski, Harry Allen, Eric Alexander, Harold Mabern, Mark Soskin and others.

Bassist Demetrius Steinmetz received his Undergraduate degree in Jazz Studies and a Masters in Music, String Performance from Bowling Green State University. He is currently serve as a member of the Jazz Studies faculty at Tri-C, and as an instructor for the jazz preparatory program through the Arts Prep program. He has instructed bass and saxophone at the Beck Center for the Arts in Lakewood, Ohio, and at Bowling Green State University. He has also recorded on Cadence records.

Daris Adkins has worked professionally as a guitarist in virtually all styles of music for over 30 years. His experience includes teaching, performing, writing, and recording. A Cleveland native, Daris spent more than a decade living in Los Angeles, CA where he gained valuable experience working in many of the city’s top recording studios.

Red Light Roxy Set List:
(V- indicates vocal tunes)
Ain’t Misbehavin’ - V
A Foggy Day
A Little Further Down the Road Apiece - V
All of Me – V
Ain’t Misbehanin’ - V
Alright, Okay, You Win -V
At Last - V
Autumn Leaves -V
Bei Mir Bist Du Schoen – V
Bernie’s Tune
Blue Skies – V
Boogie Blues - V
C'est Magnifique - V
Comes Love – V
Cottontail
Crazy ‘Bout Love -V
Don’t Get Around Much Anymore
Early in the Morning -V
Fly Me to The Moon – V
Flying Home
Get Out of Town - V
The Girl from Impanema
Hallelujah I Love Him So -V
I Got Loaded – V (male vocal)
I Want you to Be My Baby - V
I’m Beginning to See the Light - V
I’m Glad There is You –V
In A Mellow Tone
It Had to Be You
Just in Time - V
Love Me or Leave Me – V
Lovesick Blues – V
Lucky Lips – V
Makin’ Whoopee
Minor Chant
Moonlight In Vermont
More - V
Nature Boy - V
On a Slow Boat to China - V
On the Sunny Side of the Street -V
One Mint Julep – V
Oo Pappa Do- V
Our Day Will Come
Our Love Is Here To Stay
Over the Rainbow -V
Rapid Shave
Ray’s Rock House
Satin Doll
The Shadow of Your Smile
Smile
Soul Station
Splanky
Summertime -V
Sumphin’
Sway -V
Take the A Train
These Foolish Things - V
Watch What Happens
We’re Together - V
What A Difference a Day Made – V
Whatever Lola Wants -V
Why Don’t You Do Right - V
The Way You Look Tonight
You’d Be So Nice to Come Home To - V
You Are My Sunshine - V
You Let My Love Grow Cold - V
You're Nobody 'Til Somebody Loves You - V