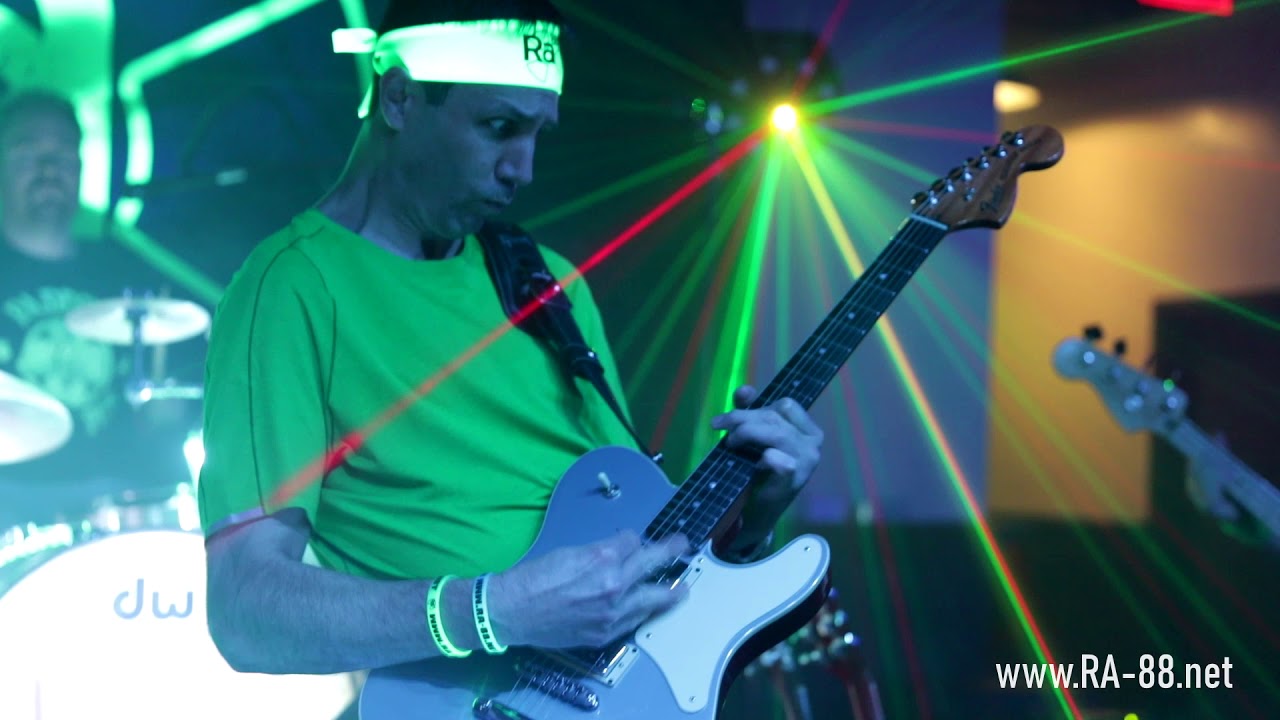 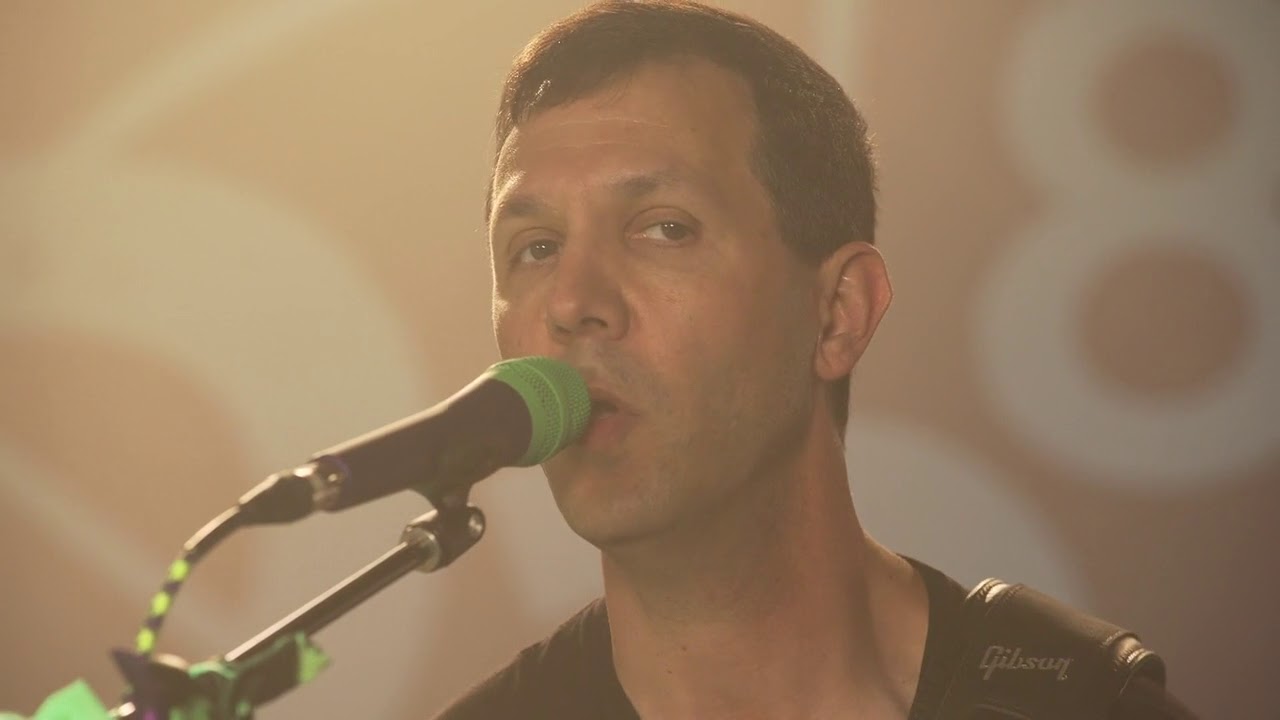 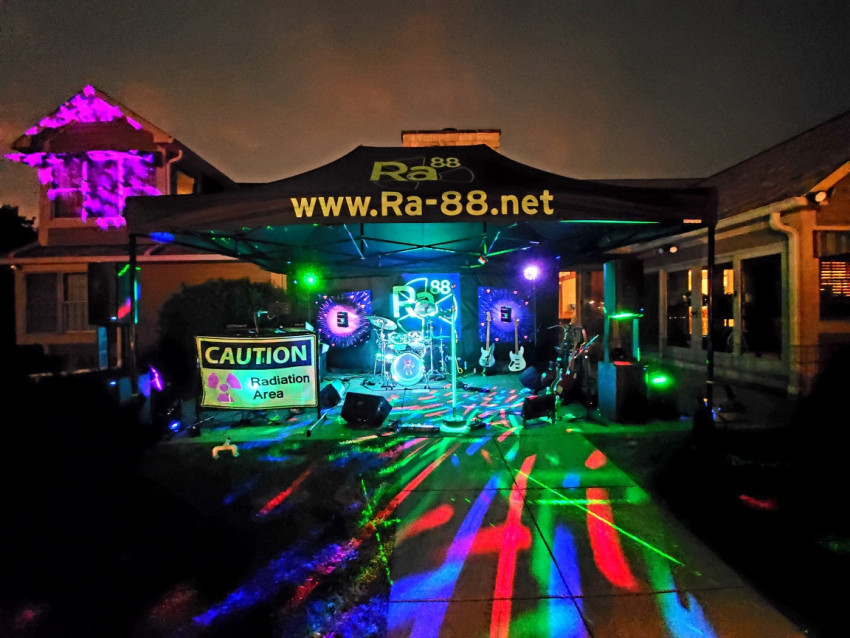 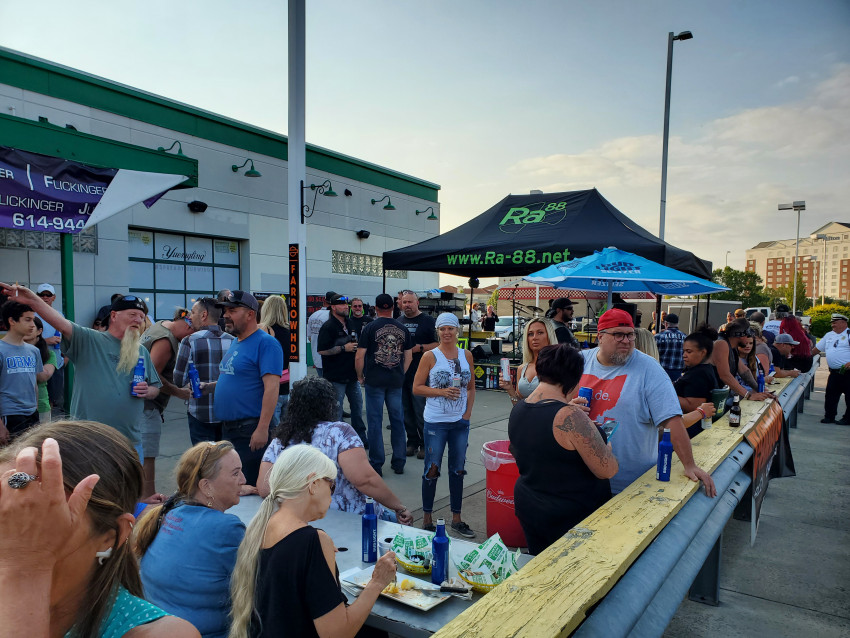 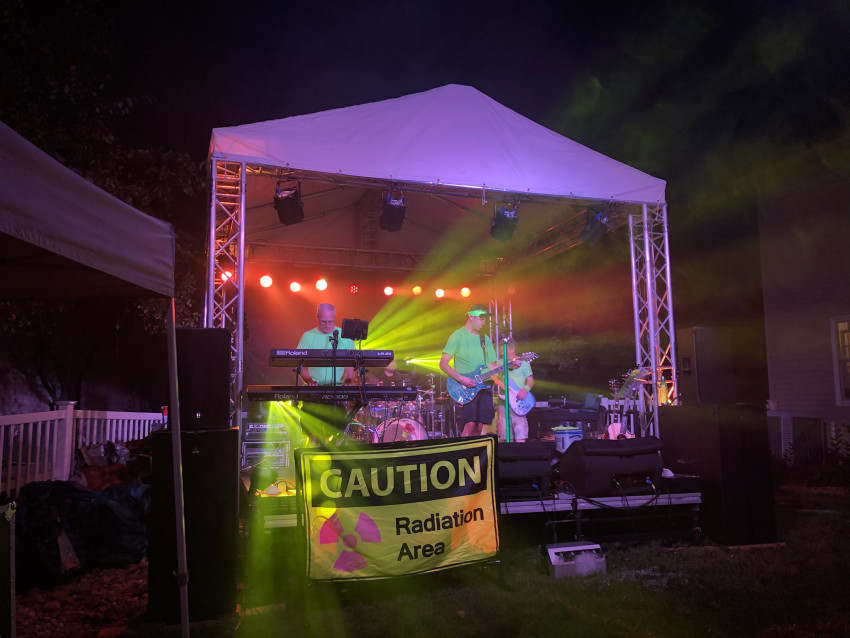 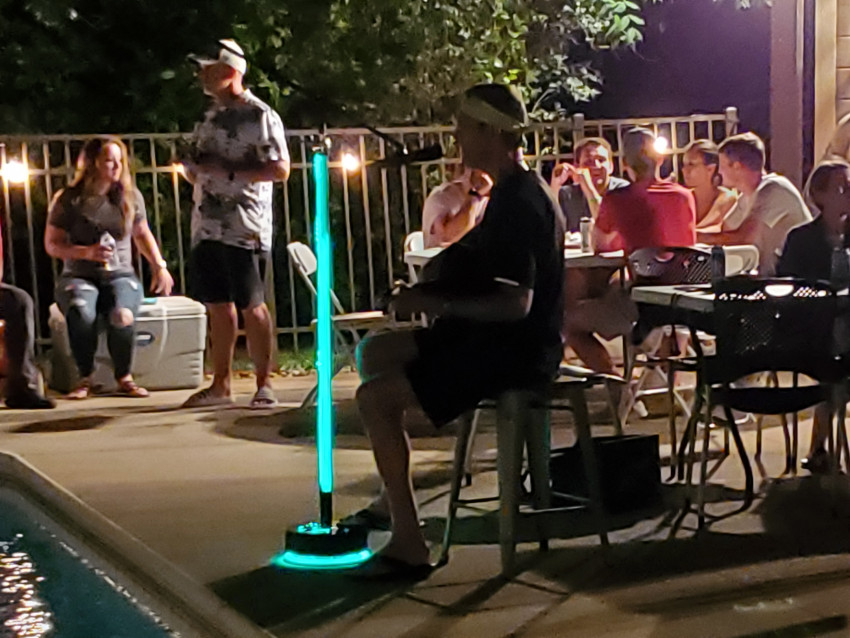 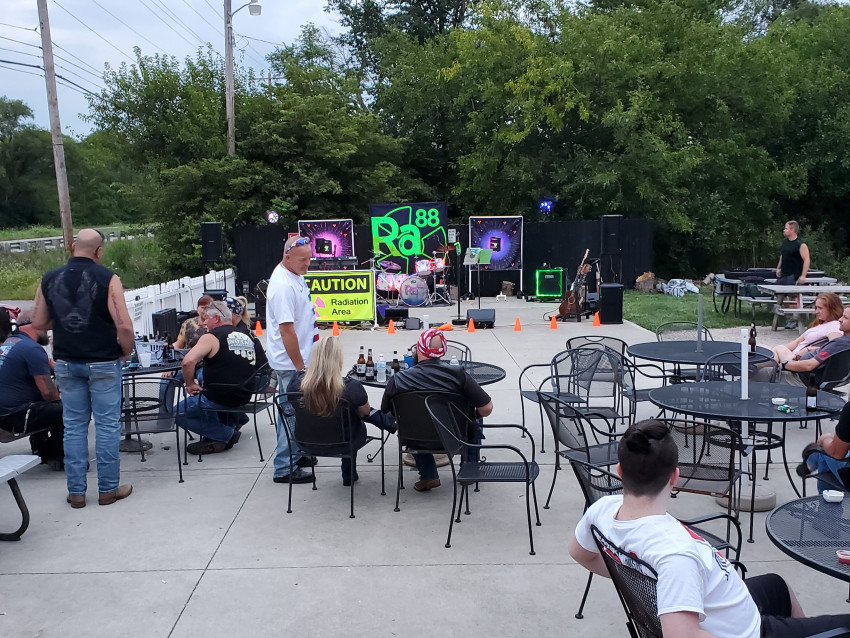 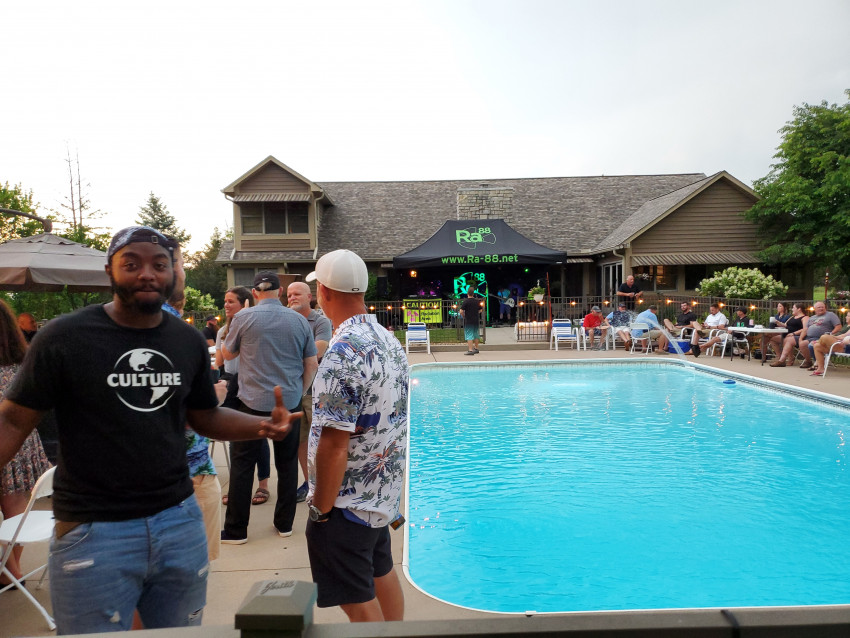 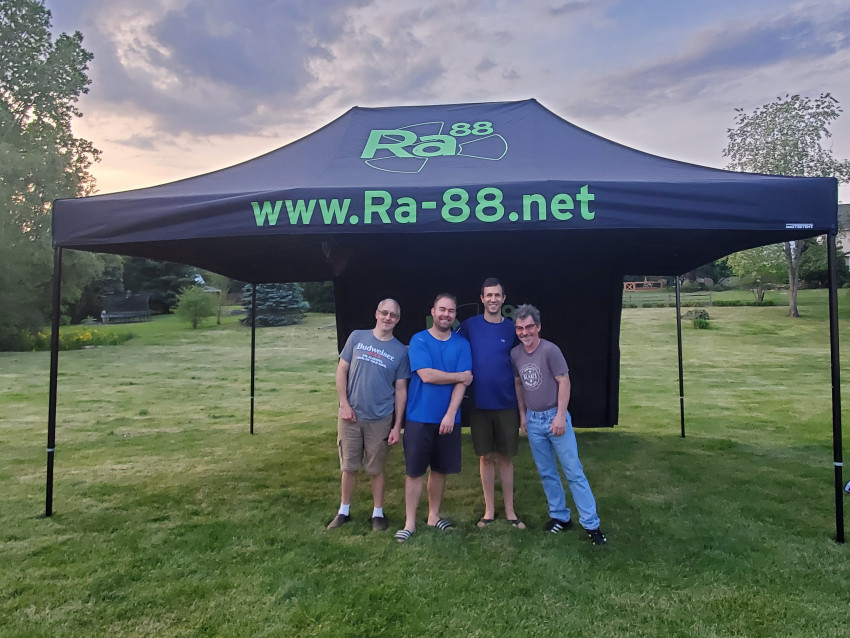 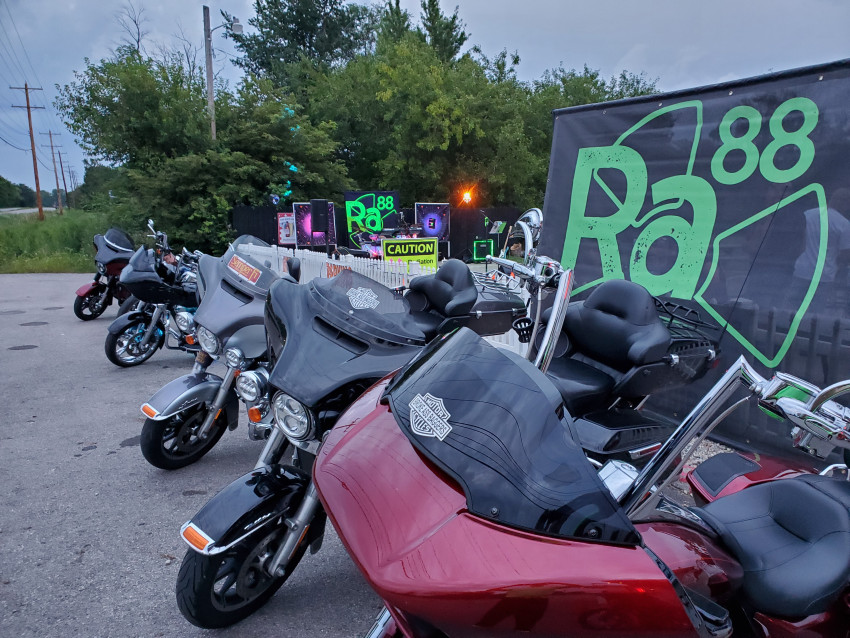 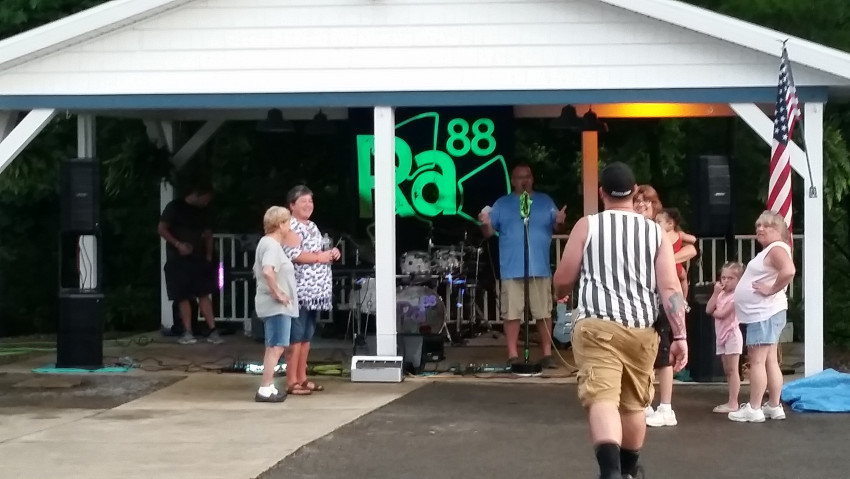 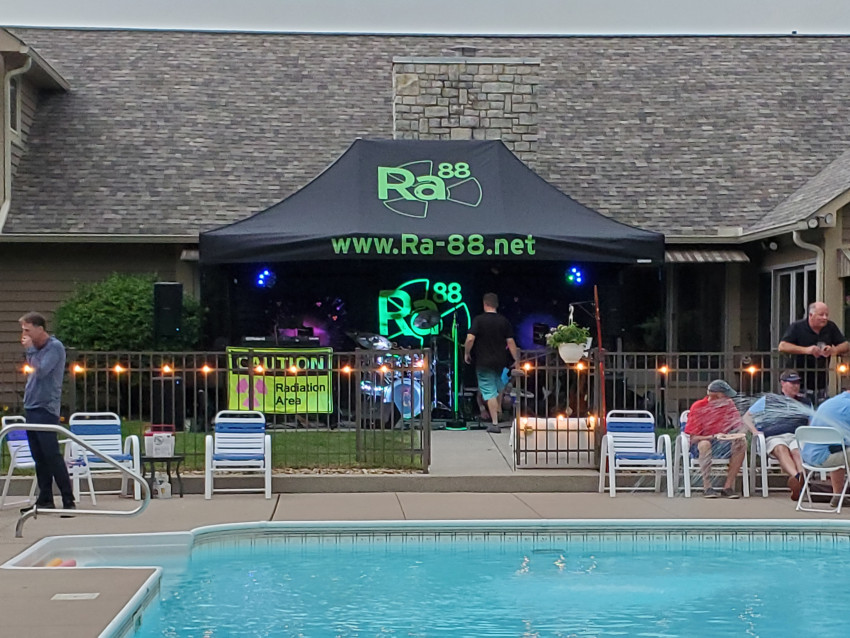 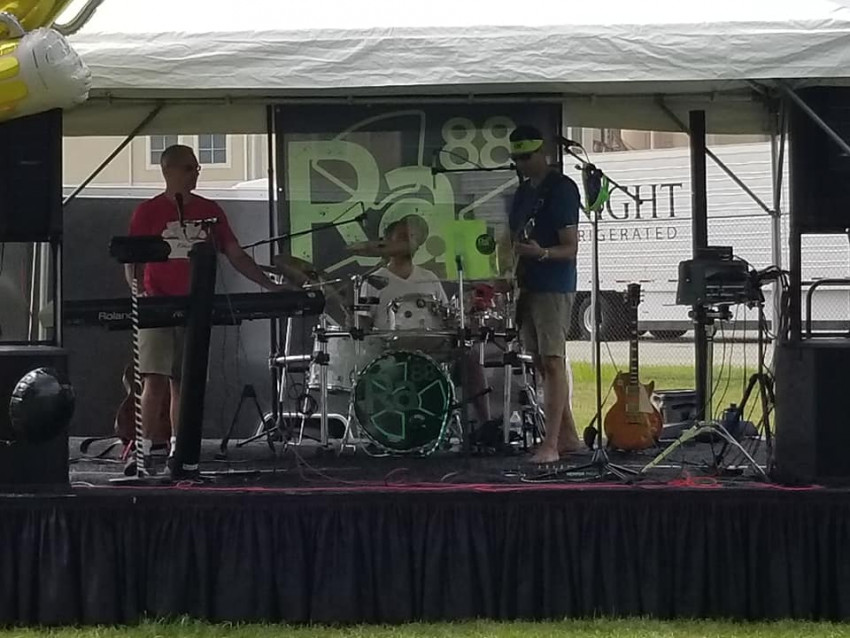 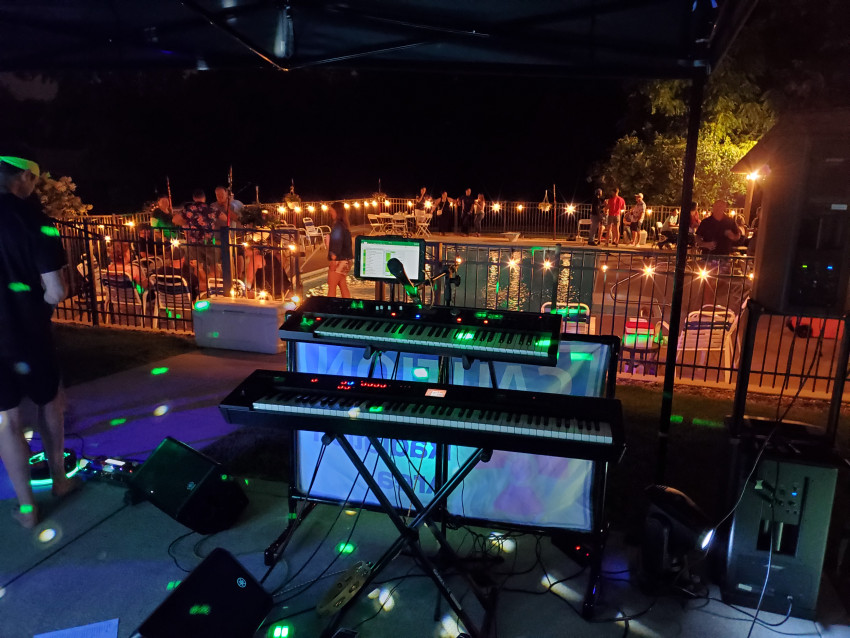 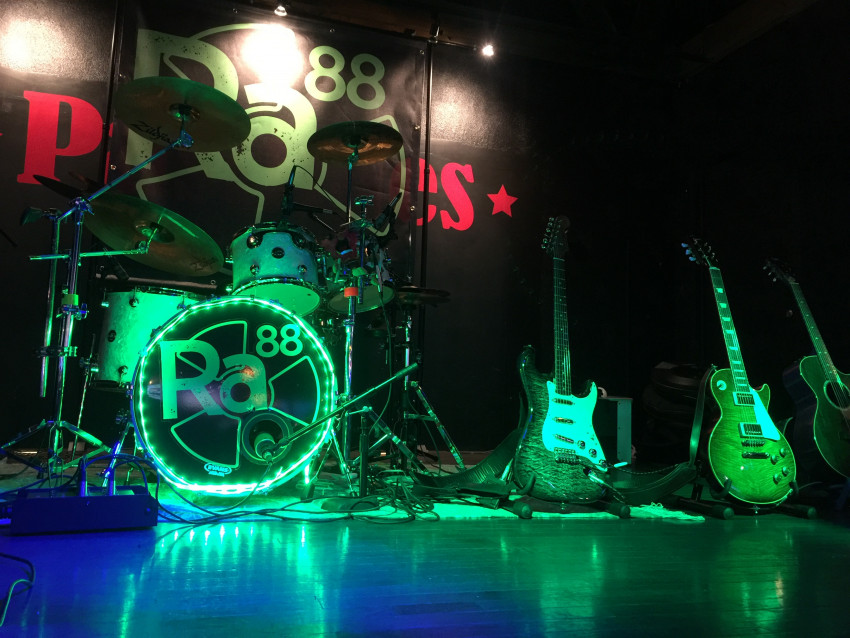 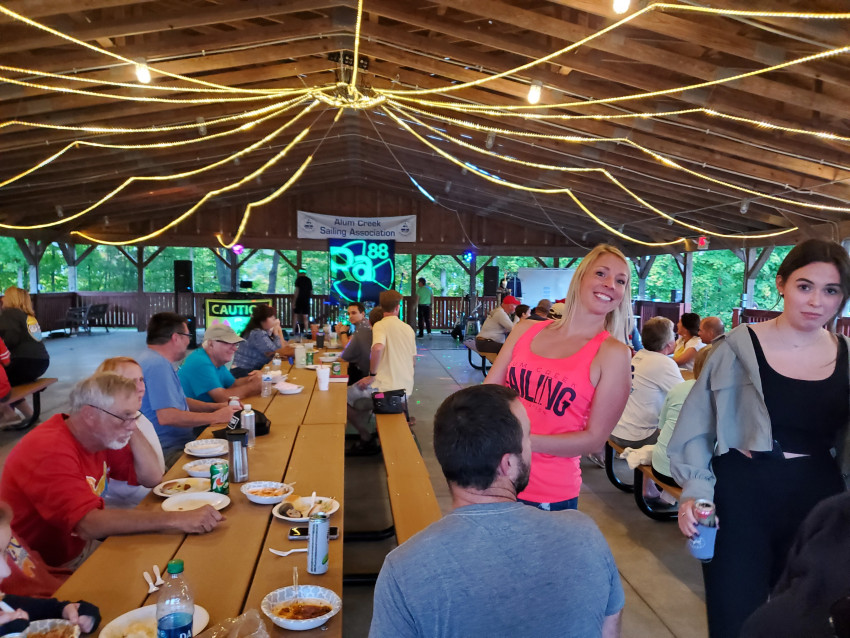 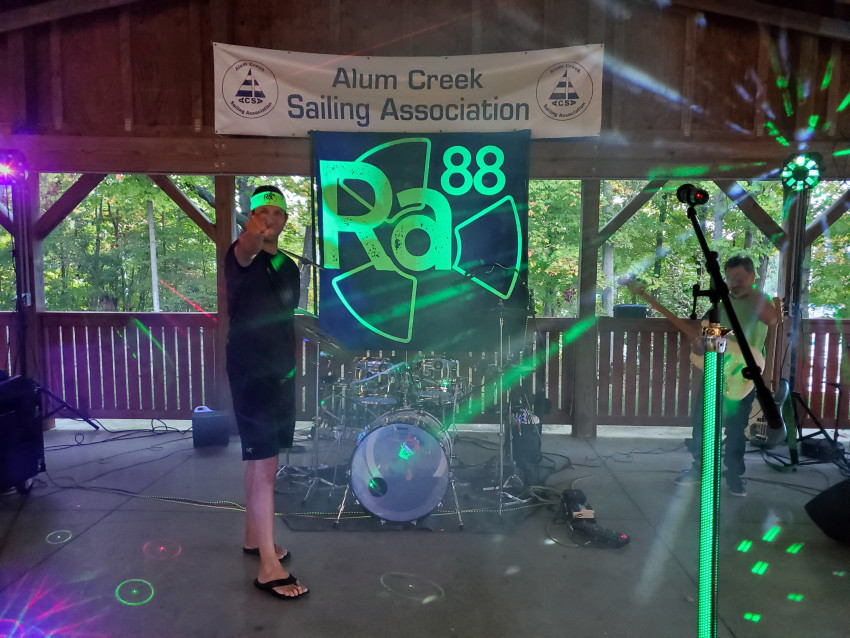 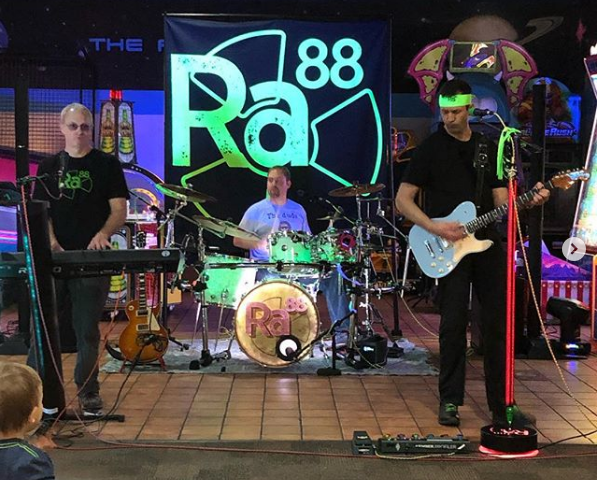 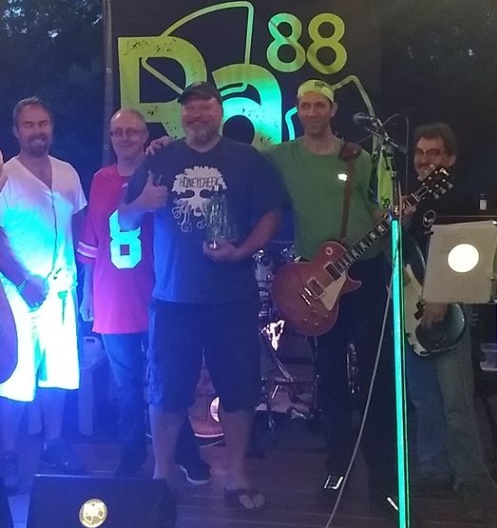 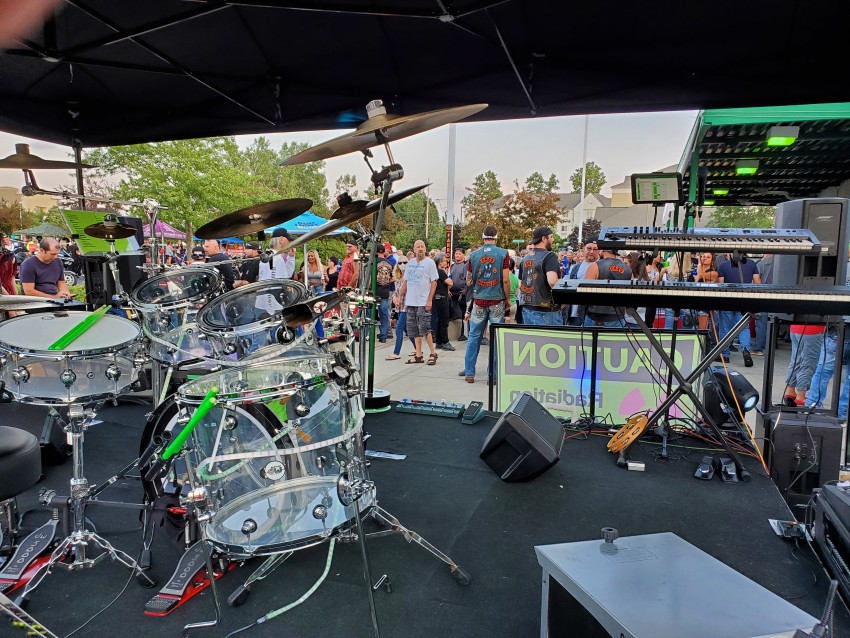 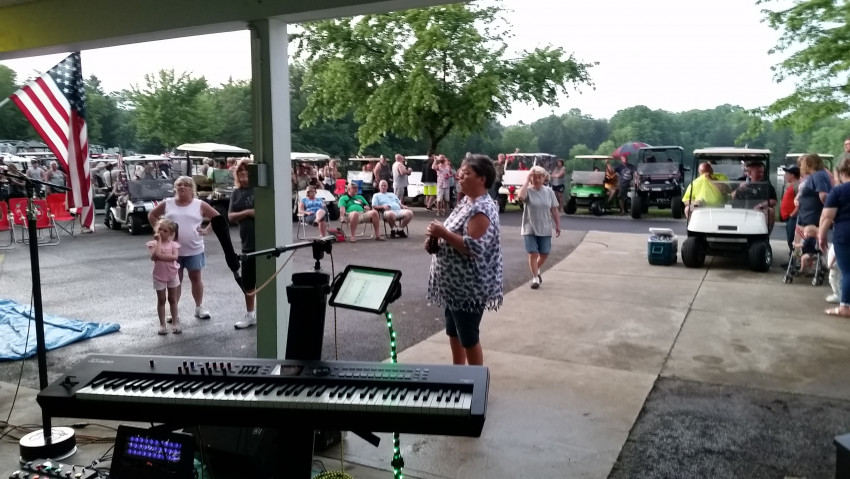 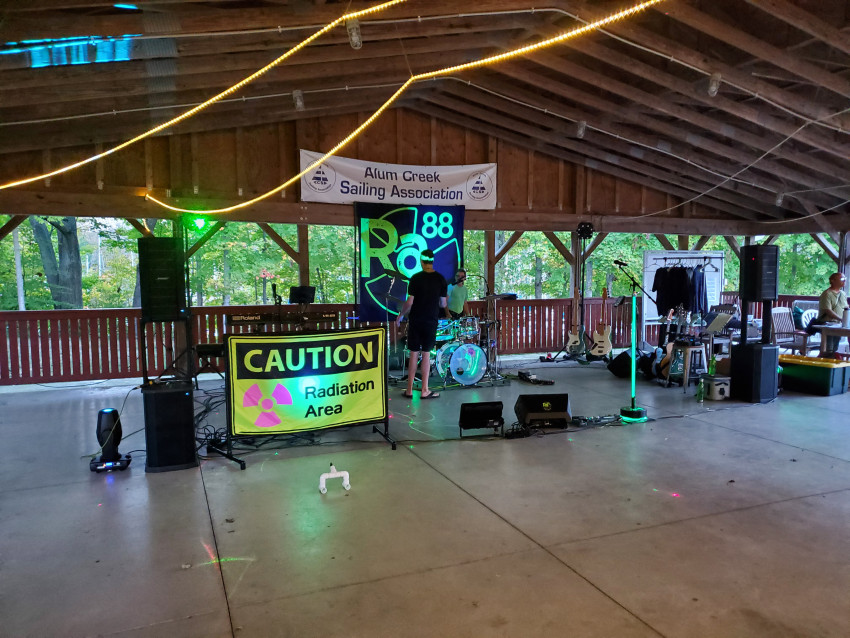 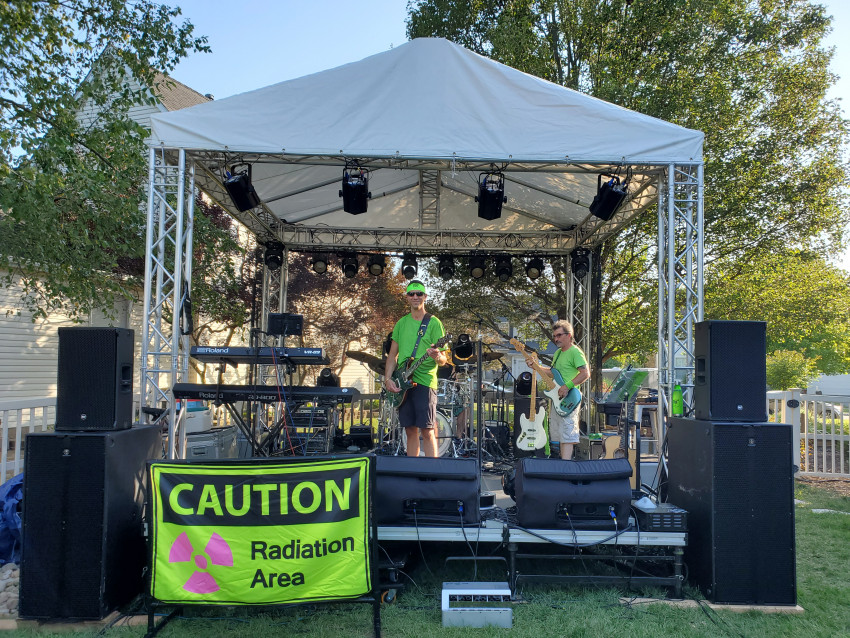 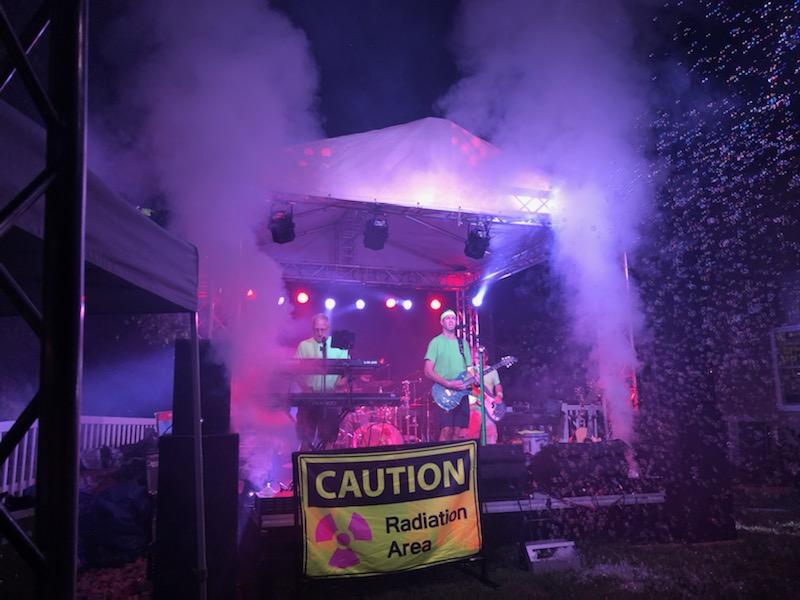 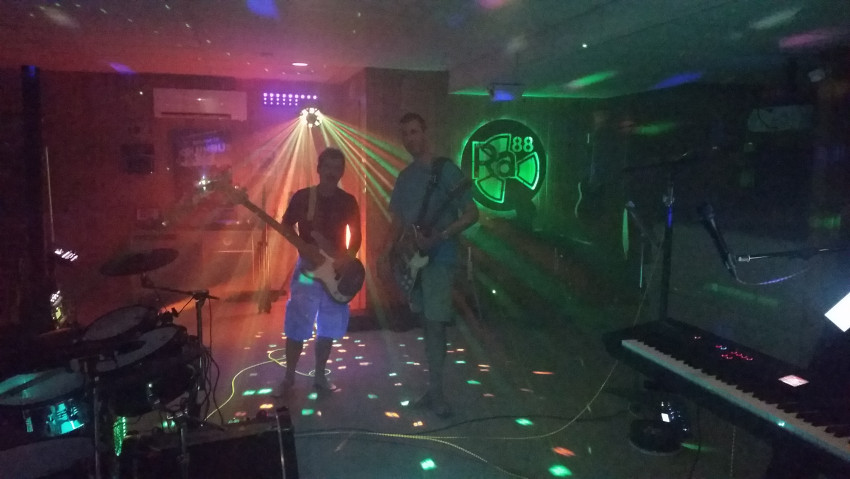 Want Stones, Floyd, Skynyrd, The Eagles, CCR? Maybe some Whitesnake or Bryan Adams to add some 80's? Add in some 90's hits and a few originals to round out the mix, and Ra88 is the result. We can play at any sized venue.. State-of-the-art lighting and effects will turn any environment into a glowing rock-stage. We provide all sound equipment and effects as well. And we're really nice guys too! (promise)

We had a Halloween party and reception and it was quite amazing and the band Ra88 put our party over the top.
Loved the music they played, the interaction they had with the guests, their light show and their personalities in general !
Next party we have we will be booking them again and I would highly recommend them for any party or event !!
Great job !!

This band was awesome for our outdoor party for after a day of sailing. The band was fun and interactive and took requests, even though they didn’t normally sing Jimmy Buffett

The band played for my company's industry event. It was a retirement celebration for our CEO. The band was very professional. They showed up on time and set up everything. They brought all of their own equipment. One of the members even scouted the venue beforehand to make sure they came prepared. They are extremely friendly and our guests loved them. Not to mention, they played a good variety of songs that were crowd-pleasers and were very talented musicians. I would highly recommend Ra88 for any event.

They were great and our members and guests loved them.

We are a 4-piece Classic Rock band with some original music as well. We can play up to 4 hours of music with minimal breaks. The band will provide all sound, lighting, and effects unless told otherwise. We even have the ability to provide our own power and can play on batteries if necessary. (but not preferred).

Our entire setlist can be found on our website at www.ra-88.net. We'll do requests if we know the songs. We love to engage with the crowd as well, so we usually distribute RA88 bracelets and sometimes give away other prizes for "Name That Tune" contests.

Our main goal is to have fun and make sure the crowd is doing the same!
Lighting and effects include: Fog machine, Rotating spot lights, black lights, laser lights, and a bubble machine if requested.

PHIL JONES
I took an interest in music on 8 track tapes, riding in the van, in the 1970's.
It was the Eagles greatest hits that probably sparked the interest in "listening" to music.
I tried school band, I absolutely hated it, I wanted to play guitar! My parents wanted me to give the trumpet a shot, but reading sheet music and playing what I was assigned didn't exactly match my rebel personality.
I was soon trying to figure out how to play "The Gambler" on the trumpet, and finally had enough. I talked my way into a horrible rental guitar for $10.00 a month, and it was required I HAD to do the lessons. I didn't really like that much either, so not much happened until one summer afternoon at the neighbors house. I was 13, and up to no good.
We decided since we were doing the things his older brother did, we may as well listen to his albums. We cued up Led Zeppelin II and when I heard "Thank You" I absolutely knew I wanted to play guitar and sing like that! I was immediately mesmerised, and went on a quest for every album I could afford, and soon got my first electric guitar.
The bands that have influenced my style the most are Led Zeppelin, Pink Floyd, The Rolling Stones, CCR, Lynyrd Skynyrd, Iron Maiden, and Kiss. I spent countless hours listening to records, and then cassete tapes, and playing guitar with black lights and incense. I was not the video game or tv or sports kid, I was almost always listening or playing music.
I spent most of my childish adult life writing songs and playing covers, but not really in a public setting,. It was the summer of 2013, when a neighbor kid asked me to play at the neighborhood party, I had recently lost my left lung to cancer and politely declined.
At that juncture of my life, I didn't believe I was going to be able to sing again but for some reason, I agreed to perform the next summer.
The following year, Brett joined me and after our performance, we met our new neighbor , John, who said,I want to play too. The following year, Ra88 was formed, and we played our first show for all 7 people. We recruited our "sometimes" sound man Mitch into a full time bassist, which completed the band.
The song "Thank You" means a lot to me, I am a very grateful person, not only to have survived, but to be able to do what I always wanted to do, with the right people, and most importantly, for the people who appreciate us for what we share. If it weren't for that sorta annoying kid, constantly asking me to play at that party, when I didn't think I could, Ra88 may not have happened, thank you Z.

BRETT ALEXANDER
Brett was "encouraged" to take piano lessons in the 5th grade. After some steady progression over a few years, he hooked up with some friends in high school and starting toying with Classic Rock. After playing "Light My Fire" with his buddies in front of the entire school, he was hooked.
Brett continued to enjoy the 60's and 70's classics, but he also took a strong liking to the Piano gods of the 80s: Billy Joel and Elton John. Through his college years, concerts were part of his life: Pink Floyd, the Eagles, Warren Zevon (and yes, even John Denver and Howard Jones). Plus about 20 trips to see Jimmy Buffett.
After moving to Columbus in 1997, Brett joined a Classic Rock band with some new friends, and they played at local bars on and off for about 10 years. The band broke up (as bands do), and he was left to play by himself and sing karaoke until 2014 when he stumbled upon Phil Jones. After playing a back-yard "Classic Rock" concert, John Fuller magically appeared. The band had a drummer and became forever known as Ra88 (Radiate).
Mitch Freshour officially galvanized the group as the bass player, and the rest will be history

JOHN FULLER
John was born into a home of music and percussion, thanks to his Father’s passion as a working drummer. He cut his teeth, literally and figuratively, on a set of congas next to his crib. Still in diapers, John received a set of Animal Muppet drums, and was steadily raised on a diet of Rock & Rhythm.
When there wasn’t a jam session in the basement, there was music blaring on the stereo. When he was not rocking out in the car, he was air drumming on the shoulders of his dad at one of the countless concerts of his childhood.
So many albums, so many shows, so many drum heroes... his influences are of no surprise:
John Bonham, Neil Peart, Ian Paice, Mitch Mitchell, Keith Moon just to name a few.
It wasn’t long before John started sitting in at gigs, even though you could barely see him behind the kit. Eventually, he would fill in full time, and soon enough, follow his own musical endeavors.
This path has led him to Radiate, where he passionately propels the nuclear reaction of Phil, Brett, and Mitch to create a radioactive classic rock experience

MITCH FRESHOUR
It was sophomore year in High School, and Mitch had taken an art course where the instructor would allow students to bring in albums, and play them on the school issued, all-in-one, monophonic record player during class. Creating art projects while listening to Jeff Beck’s Blow by Blow and Wired albums over and over for the entire semester helped launch a lifelong passion for music and creativity.
Realizing art wasn’t his forte, Mitch moved towards engineering while continuing to expand on his passion for music, developing a taste for rock and alternative bands by covertly listening to his older brother’s extensive record collection, ranging from such iconic bands as the Allman Brothers to Jean-Luc Ponty, Marshall Tucker Band to Frank Zappa, Led Zepplin to Pink Floyd, and anything and everything in between.
Inspired by concerts and the local Columbus music scene, Mitch began buying, modifying, and building guitars and amps, as well as playing self taught keyboards and guitar with friends in garages and basements. Being an Engineer by profession he also always had one hand on the mixing board and recording equipment.
Mitch was introduced to Ra-88 at one of their first live shows, running the soundboard and lending a hand wherever needed. Admiring Ra-88’s dedication and talent, he jumped at the opportunity to step out from behind the mixing console and join the band up on stage, filling the bass player slot, completing the Ra-88 sound, and never looking back.

We provide all sound and lighting.

Our mixer is a top-of-the-line PreSonus StudioLive unit, and our stacked Bose speaker systems can play to venues of virtually any size.

We also have wireless capability to allow free movement among the audience during certain songs.

If playing outdoors, we ask to play under shelter and on stage or pre-fabricated floor (no dirt or grass).