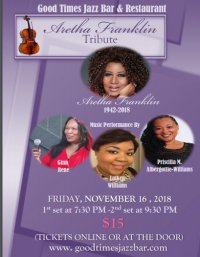 Be the first to review Priscilla Williams

Priscilla Williams is a sophisticated, soulful and chilling vocalist/pianist, who performs in gospel, pop, country, R&B, and jazz music in equilibrium. She began singing at 5 years-old in her father’s church where she grew up in Beaufort, South Carolina. Williams was already familiar with such iconic vocalists as Mahalia Jackson, Sarah Vaughn, and many others. She holds a Master’s Degree plus 30 credits certification in Education Administration. Priscilla is the featured vocalist for the Savannah Jazz Orchestra and can be heard on the Savannah Jazz Orchestra’s: live recording “Satin Doll,” the music of Duke Ellington and Johnny Mercer. Williams has performed with superb jazz musicians such as trombonist Teddy Adams, bassist Ben Tucker, Eric Jones, and many other icons. Priscilla Albergottie has secured numerous showcase performances in Berlin, Frankfurt, and Stuttgart, Germany as well as a plethora of performances in the United States. She released her debut demo, “One Star in the Night” and has performed live before “Fergi”, the Dutchess of Whales. Priscilla has a genuine love for music from all genres.