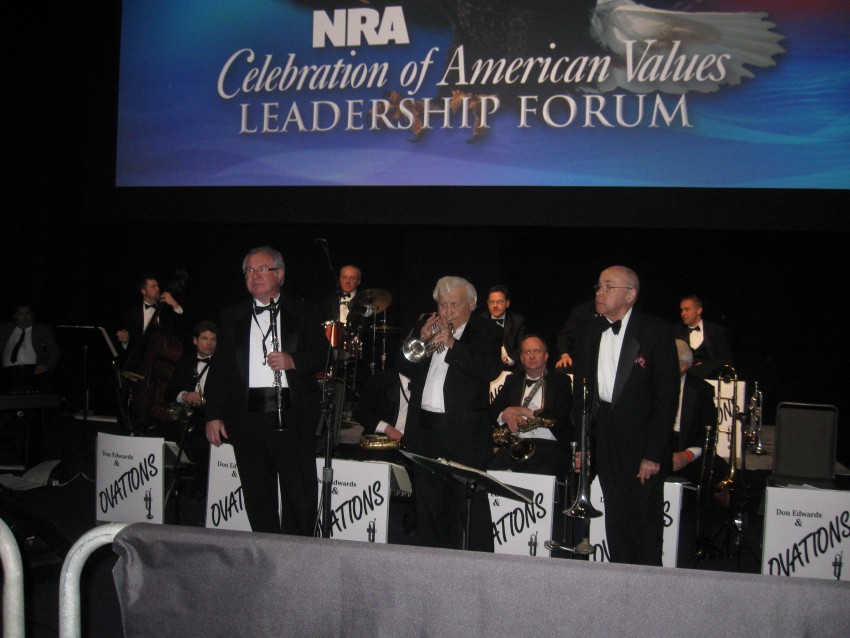 OVATIONS is the premier big band of the Southeast. Led by veteran trumpet player Don Edwards who was a member of several name big bands, it performs all the Standards and Swing tunes from the Big Band era along with a touch of more contemporary music as needed for dancing. Ovations is at home performing for engagements ranging from receptions and dances to national conventions and festivals. Its size ranges from seven to fifteen members as needed. With its exceptional music, extensive song list and Edwards' spot-on ability to read and cater to the crowd, Ovations is known as "the band that keeps dancers on the floor and listeners begging for more!"

They really were great.

Very professional to work with and attention to details. Had a stage layout drawing from them and a face to face meeting to discuss all details. They were perfect for the 35th anniversary celebration for our theatre. Definitely would have this band back again.

The band can vary in size from seven to fifteen members as needed. It is especially popular for special events that include wedding receptions, anniversary parties, corporate events and national conventions. With its hand-picked musicians, extensive song list and exceptional ability to read and cater to the crowd, Ovations always welcomes requests from the audience, and is equally at home performing at both concerts and dances, as well as providing a background of smart listening music at receptions. Shortly after it was introduced to the public, Ovations became known as "the band that keeps dancers on the floor and listeners begging for more!"

For indoor events, the band would prefer enough overhead lighting to enable the band members to read their charts. It would also have its own stand lights to use as needed. The band would also require dressing rooms where the members can dress. When performing indoors, It also needs a break room with a minimum of light refreshments during its breaks.

The only time set lists are used is when the band is performing a concert or show. On all other engagements, leader Don Edwards prefers to be adaptable and follow the moods and likes of the crowd.