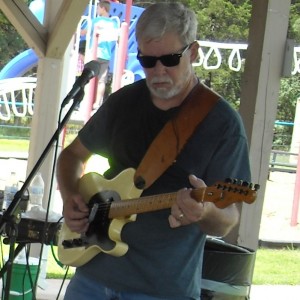 One Lone Hombre is Steve Hicks playing lead guitar and singing lead vocals to some of the best classic Country. Using digital sequenced music files to provide the Bass, Drums, Keyboards and other needed sounds, I create a full band sound just playing by myself. Working in the Northwestern Arkansas area. Available bookings for clubs, private parties, weddings, etc. Can also book as a 3 - 5 piece band depending on your requirements.

We had the duo at a corporate farewell dinner. They were perfect for each portion of the night. Upbeat and fun for our happy hour, toned down for dinner then they did a bit of karaoke with the group after dinner. Played lots of songs that everyone knows the words to and our guests had fun taking turns singing portions of the songs. I highly recommend them. Fun, Professional and our guests enjoyed.

I hired Steve for my parents 50th Anniversary party. He was perfect for this party!! He traveled to Prescott and was extremely reasonably priced compared to others. He played beautifully and I couldn't have been more pleased. All personal requests were played and was wonderful about stepping aside to let prayers and congratulation speech's be made letting us use his mic. He received rave reviews from all of those who attended and the manager of the property called to request his contact information for other parties. You won't go wrong hiring Steve!!

Steve Hicks is an accomplished musician and vocalist that can entertain a party of 5 or 500. Born and raised in Louisiana, I learned to play guitar and piano at an early age. Over the last 35 years I have play in numerous bands in Louisiana, Arkansas,Tennessee and Michigan. Relocating to Northern Arkansas in 2015, I decided to concentrate on doing a solo act to save on the time and effort of putting together a full band. I have worked a few years with another musician in a duo act and it worked really well, we could play clubs that could not afford a full band, but could afford us with a full band sound. After moving to Van Buren, Arkansas in I started gigging out in February and haven't let up since. I play mostly classic country, Merle Hagard, George Strait, Dwight Yoakam, etc. and then throw in some new music by Jamie Johnson, Dierks Bentley and others. I also do some classic rock and blues by The Eagles, CCR, SRV, BB King, Santana and others. I use a very efficient Bose sound system that produces very full sound at lower volumes or you can really crank it up if need to. Using sequenced music files that produce the bass, drums and other instruments, I produce the full band sound with me playing all guitar parts. The solo act is going great and I am establishing a fan base in the river valley. Can work solo or up to a 5 piece band with fiddle.