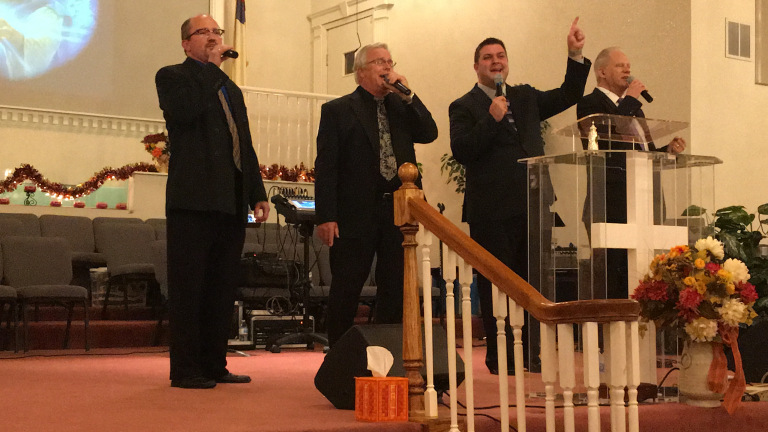 CELEBRATING 19 YEARS IN INSPIRATIONAL MUSIC!
New Destiny Quartet is a singing group that believes the message is more important than the genre. A concert with NDQ may consist of one or more of the following types of music: Inspirational, original, traditional hymns, Praise and Worship, Patriotic, Christmas, or acapella, and the sharing of our testimonies. New Destiny Quartet offers something for everyone.
When planning a special celebration, concert or retreat, the New Destiny Quartet will add just the right amount of praise and worship, music, and humor to make your special event a memorable one. For more information, please send an email to ndqtgd1(link hidden) or call (phone number hidden)

These guys are true professionals. They love The Lord with all of their hearts and love singing about Him. The manager of the group is the bass singer, Tom Durham, and he is so awesome because he will truly work with you and make the whole experience from the booking of the concert, to the concert itself completely enjoyable.

One thing that's so great about these guys is they aren't held back by a particular genre. They just sing gooood music.

Seems like I have known the group forever. I love their harmony, and the songs they sing. I have been to many of their concerts, and have never been disappointed.

We had New Destiny come and perform for us at our Annual Fall Dinner of American Baptist Churches in Metro Detroit, and we were Blessed by their music. All enjoyed the evening. Great voices and personalities.

Thanks Dennis! We had a great time as well.

You will be blessed!

I have been priviledged to hear New Destiny Quartet in concert and what a blessing they are. Their close harmonies and smooth sound is something that many groups can only dream of. If you have an opportunity to see them in concert, you will not be disappointed.

I have seen New Destiny Quartet live in Concert a few times. It was so wonderful I just can't get enough of their music I have all of their projects and listen to them in my car all the time. The songs are so meaningful and straight from the heart. These guys have such wonderful voices that they use to sing the words from The Lord for all to hear. If you have not yet seen them in concert go and hear them you will be Amazed!!

I have seen New Destiny Quartet perform a few times now. Once when they opened for Guy Penrod and Their 12th Anniversary Concert. They are amazingly talented and such a joy to hear. Their music is pure and heartfelt. They have been given the wonderful gift of gospel music and share this gift for all to hear. If you havent heard them you truely should give a listen. I look forward to the next chance my girls and I have.

Price Range: Free will offering for inside venues.

Celebrating 14 Years In Gospel Music!
New Destiny is a singing group that believes the message is more important than the genre. We sing a mixture of inspirational, original music, Traditional hymns, Praise and Worship, and acapella, while sharing their testimonies, New Destiny offers something for everyone.
In 2000 an exciting new group burst on the gospel music scene – New Destiny Quartet. New Destiny Quartet has overcome many obstacles that have come our way and God has been faithful and today New Destiny Quartet has become one of the most sought after Christian Music artists in the Michigan/Ohio area.

In 2003 New Destiny Quartet & producer George Hairr released our 2nd national project with MissionHouse Music “He Gives Me Strength” which became a great success for the group. The group released 2 Radio singles nationwide from this project with both songs appearing on the national music charts. Our first release from the CD “Jump Across Jordan” soared to the top 20 in several radio markets around the country and reached # 1 in two of those radio markets.

In 2011 NDQ “Burning the Midnight Oil” was released in September of 2011 to rave reviews and became our first national Singing News Chart Song. Our current recording project is entitled “Walk On” and features an excellent mixture of current and classic Southern Gospel songs.

In August of 2013 we released the song “She’s Working On Her Testimony” to gospel music radio. This song has a powerful and anointed message and has already blessed many people.

New Destiny Quartet has been privileged to sing in Churches and Auditoriums in Michigan, Indiana, Illinois, Iowa, Ohio, Ontario, Canada, and Tennessee while sharing the stage with artists like The Booth Brothers, Michael English, Guy Penrod, The Mighty Clouds of Joy, Vickie Winans, The Dove Brothers, The Talley Trio, Gold City, Squire Parsons and many more.

But it is the souls that have been won to Christ and the Christian who was struggling then lifted up by our music that is why we travel and sing for our Lord and Savior.

When planning a special celebration, concert or retreat, the New Destiny Quartet will add just the right amount of praise and worship, music, and humor to make your special event a memorable one. For more information, please contact us on GigSalad.