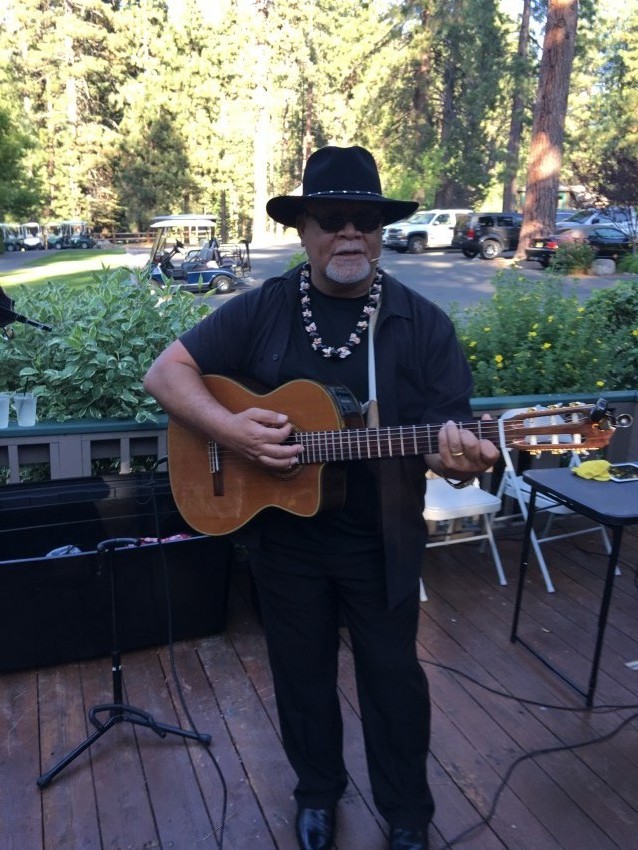 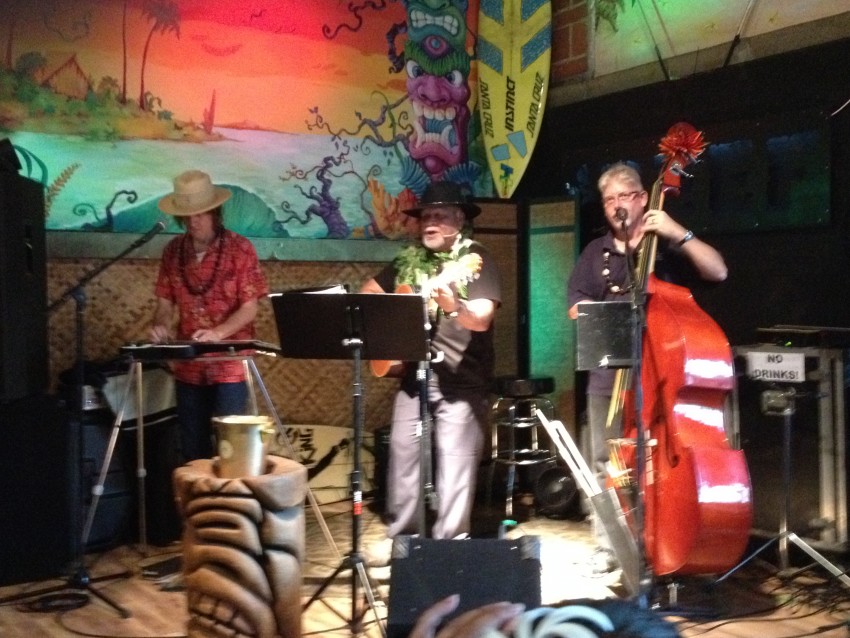 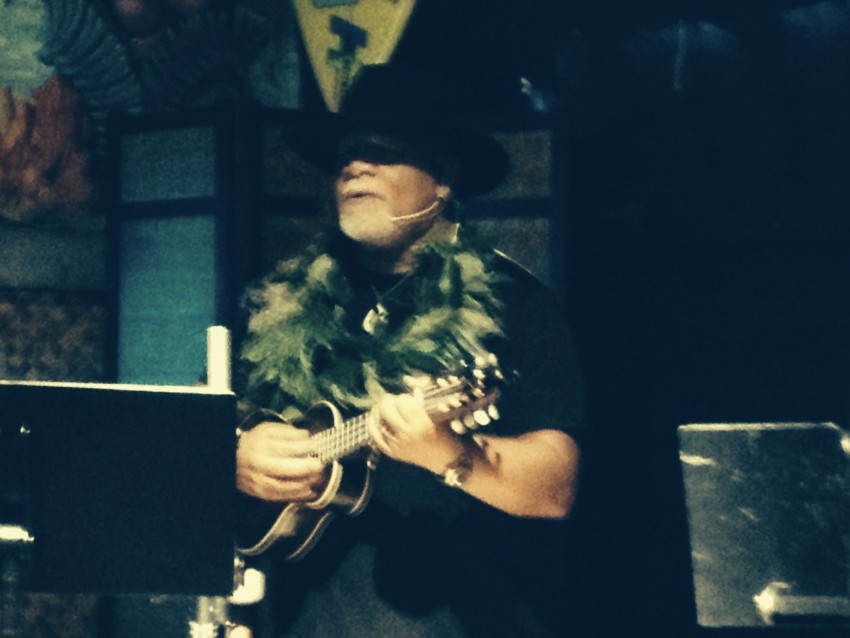 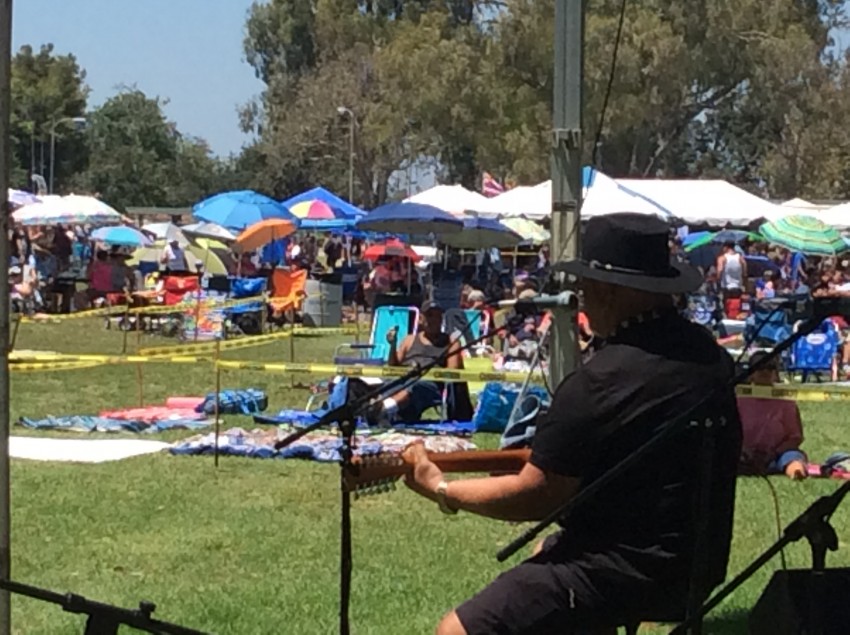 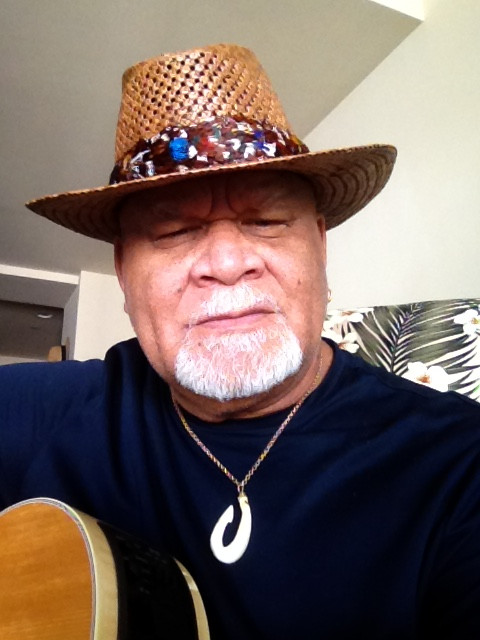 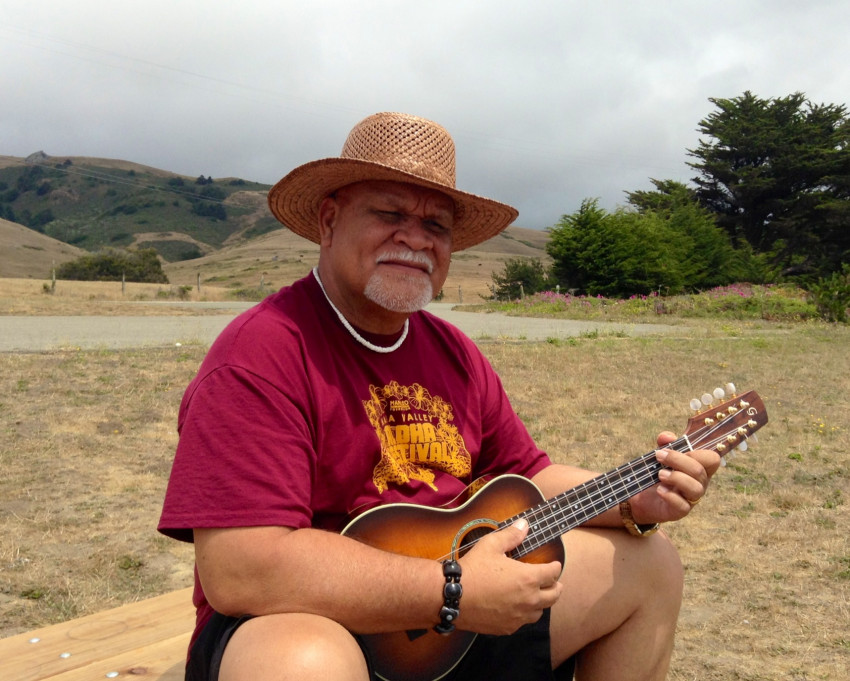 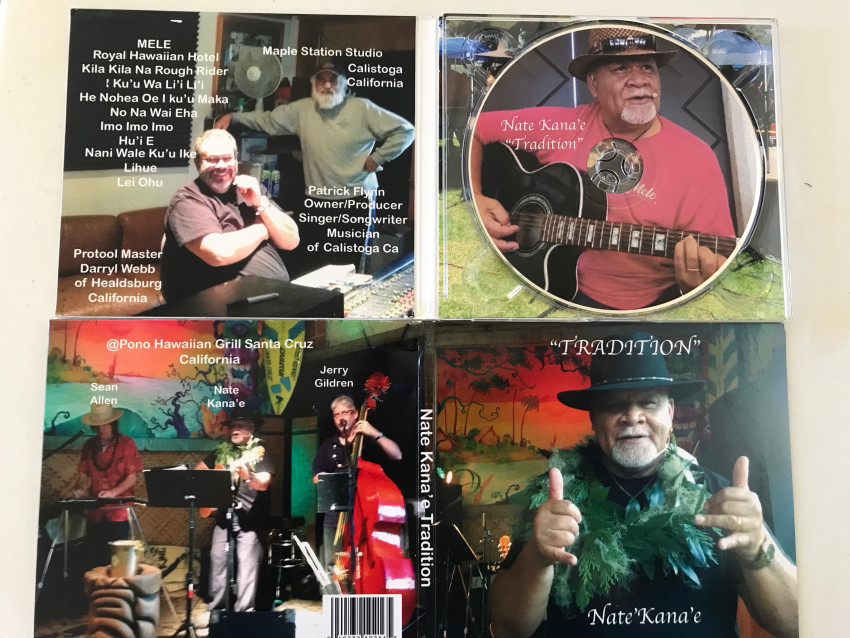 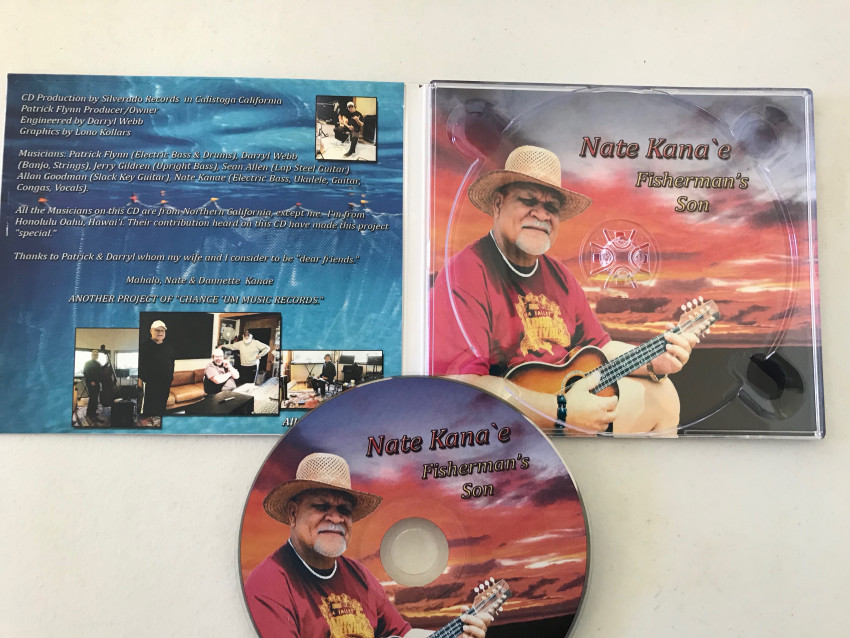 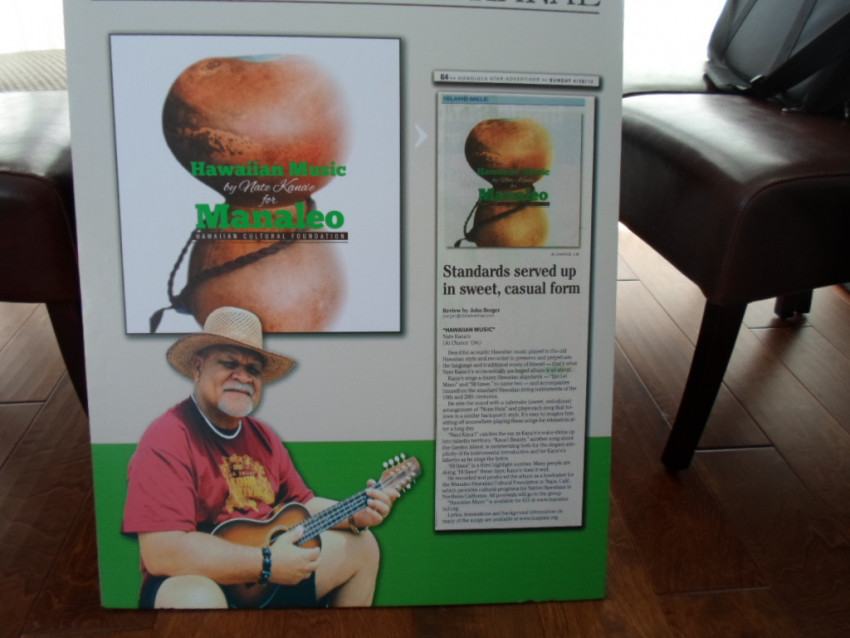 I provide Traditional Hawaiian, Hapa Hawaiian, and Contemporary Hawaiian Music from the "Pu'uwai," of Hawaii. I'm also a "Solo" artist and prefer to perform alone. No dancers. My choice of instrument's are the Ukulele, and Guitar. I also perform "LDDO" Music (listening, dinning, dancing, oldies, etc.). All depends on the event. "Mahalo Nui Loa.!"

Excellent Addition to any Event!

Nate is such a terrific and professional musician/ entertainer. We had him perform at our backyard Aloha party and his music and singing was the highlight of everyone’e evening! He truly brings the Aloha Spirit with him and it created such a warm and intimate setting for our guests! Six stars!

Mahalo Nui Loa (Thank you very much) Margie. My wife (My Roadie) Dannette and I had a great evening being at your event and I appreciate you finding me on "GigSalad." I truly had a great time performing for your wonderful guests at your beautiful home. Please feel free to find me and other performers on the GigSalad website. Aloha and safe travels to your new residence in Arizona. "Ke Akua Pu" (God Bless ). Aloha!

Nate was even better than I could have ever imagined! He was so easy to work with, showed up on time , and played at our party for the entire two hours plus some! He is an amazing musician, he really was a highlight of our luau. He brought his wife along and they are just the sweetest couple. I could not recommend him enough. Definitely consider Nate at your next event!

Aloha Brittannee. It was more than a pleasure performing at your event. My wife and I enjoyed ourselves, and it was one of the best we've been to. You and Matt are wonderful people and so was everyone else. Mahalo for finding me on GigSalad. Have a safe and happy life. Mahalo

Nate did an outstanding job of entertaining our guests. He showed up early and stayed late. His music was perfect for our Luau party.

Mahalo Scott. I really enjoyed performing at your beautiful home and your guests were awesome. Aloha a hui hou!!

A truly wonderful musician and singer

Nate's beautiful voice is mellow and smooth; there isn't a song he doesn't know! We had him entertain at our family reunion and he was able to fulfill every single request from old Hawaiian songs, to Elvis, to Japanese. He really did make our evening extra special. I know we'll be asking for him again!

Aloha e Marilyn. I'm so grateful for you and your Ohana having me entertain at the reunion party. My wife Dani and I enjoyed our evening with all of you. The ambience at the Clubhouse with the combination of delicious food and friendship was so generously shared. We sincerely appreciate it. I'll be glad to perform again anytime for the Ohana. Thank you for the review, and finding me on GigSalad. Mahalo Nui Loa, A Hui Hou!!

Authentic and full of soul!

Nate is the real deal. His performance and presence took our party to the perfect place. He set a wonderful mood and provided just the right ambience. On top of that he's got heart beyond words. An amazing day wouldn't have been so amazing without Nate.

Aloha Bryan. Thank you very much for having perform a friends party. Also for your help. I and my wife are so grateful for having us. Your wife and awesome friends were just soooo wonderful it was comforting and ejoyable day. Thank you so much.

Great talented entertainer--played at a small reunion--sings, nice voice--even better than the YouTube clip-- and plays guitar and uke.. It was so nice. Like a trip to the islands. Performs authentic Hawaiian and a variety of other music. Seriously, Nate is the real thing. Also socializes extremely well with the group in a gracious friendly island way which adds to the party and makes people comfortable His wife Danny was also in attendance. Sort of a Sonny and Cher thing going--he is having fun and she is tell him he had better play more songs, They are great company. The guests thought he was awesome. Authentic Hawaiian charm and more. Highly recommend this act.

Aloha Keith! Mahalo for rating on GigSalad. I really appreciate it. We had a wonderful time and enjoyed your classmates who is the best. Good feeling when performing for good people. Thank you very much. Aloha, Nate & Dani.

We were lucky enough to enjoy an evening with Nate at our home. He is very talented, he a wide repertoire, and is a very nice person to be around. He worked hard all evening and was very gracious to my guests. I would highly recommend him.

Aloha Dave. My sincere appreciation for you comment on Gig Salad. My wife and I really loved your home and it's location, amazing. We would like another visit there sometime. Your hospitality and that of your guest was comforting to us and I'm glad you found and hired me. Let me know if you need my services again. Please let Jane and your wonderful grandson Ethan know it was a pleasure to meet and spend time with all of you. We hope your daughter and new grandson is well and in good health too. Mahalo Nui Loa, Nate & Dani Kanae

Nate was so good, we almost fired the DJ!

Nate sang at my daughter's Luau wedding and the attendees want him to sing throughout the whole event. He nailed "over the rainbow" when the wedding party was coming back down the isle, and sang "Cinderella " from Steven Curtis Chapman during the daddy-daughter dance. Best descision I made concerning the wedding. He even sang for hula dancers on the fly, no rehearsal. Everyone loved him!!!!!! He does charge enough for his skills.

Nate Kanae brought our family together with his music.

Nate's musical performance brought a wonderful and classy touch to the memorial remembrance of my Aunty. His masterful artistry of Hawaiian music and kind persona was the highlight of our celebration. We will have a one-year anniversary next year and will definitely ask Nate and his lovely wife to come again. Our entire family agrees, Nate is both a beautiful person and a beautiful spirit making beautiful music.
Mahalo nui loa.

I would like to thank the family of Mabel Ignacio for having me perform for such a wonderful and loving family. True Ohana Nui. My wife and I truly enjoyed being with them and the loving kindness they shared with us. Mahalo Nui Loa, Meke Aloha Pumehana. Aloha A Hui Hou, Ke Akua Pu........Nate & Dani

I'm a Solo Musician/Entertainer. You will hear me sing and play traditional/modern/contemporary Hawaiian Music. The instruments I play are the Ukulele and Guitar. If Hawaiian music is what you need for your occasion then I have it for you.

I live in Honolulu Oahu, Hawaii. I've played music since I was a child. I started playing professionally in 1965. In 1967 traveled to Cranston Rhode Island for a Polynesian Show. The Military Service stopped my music career temporarily. After my discharge from service I continued to play professionally in Waikiki on the island of Oahu Hawaii. I performed professionally with Musicians's that played Jazz, Rock, Country, Blues, Oldies, Disco, and Hawaiian. I was also a Union member of local 677 Musician's Association of Hawaii. An affiliate of the American Federation of Musician's & Songwriter's Union. I retired from it in 2005. I did shows in Santa Cruz, Napa, San Francisco, Los Angeles, San Diego, Crescent City, Portland Oregon, Seattle, Las Vegas, Lake Tahoe, and Reno Nevada. I'm willing to play anywhere if the Per Diem ($$) is right.

I prefer the event provide sound, lighting if needed, staging area for performance. If I provide the sound equipment it'll be at an extra cost and included in the pricing.

My parents were my greatest influence in the field of music and entertainment. My mother was a wonderful vocalist and my dad also. My dad played the Guitar, Ukulele, and Steel Guitar. Both did radio shows in their younger days and public performances. Two of my older brothers were musician's and one played professionally in Honolulu Hawaii but never performed abroad as I did.