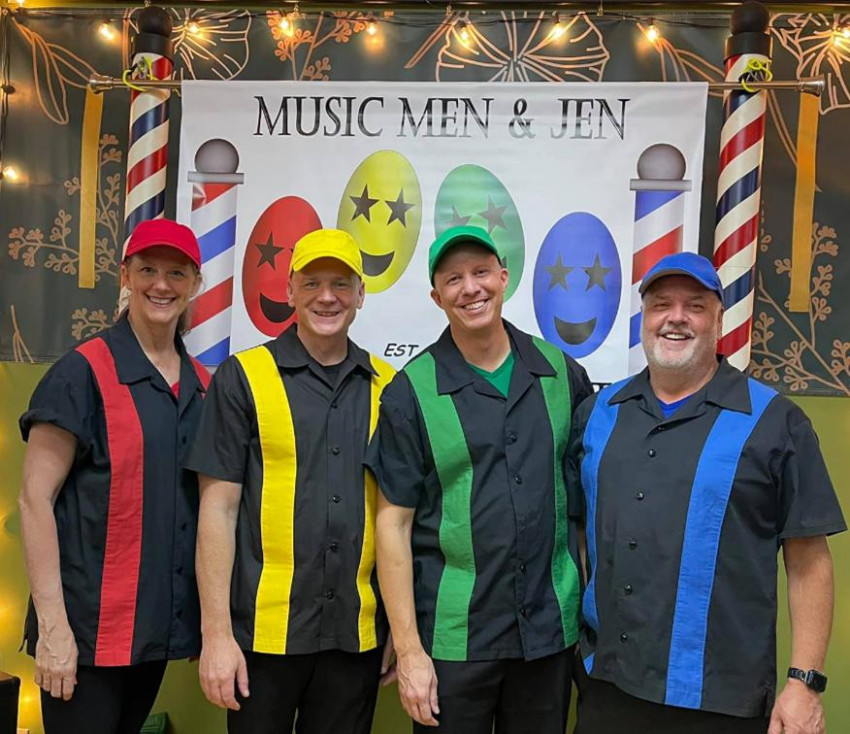 Sep, 2021; we may or may not have gone bowling afterward. 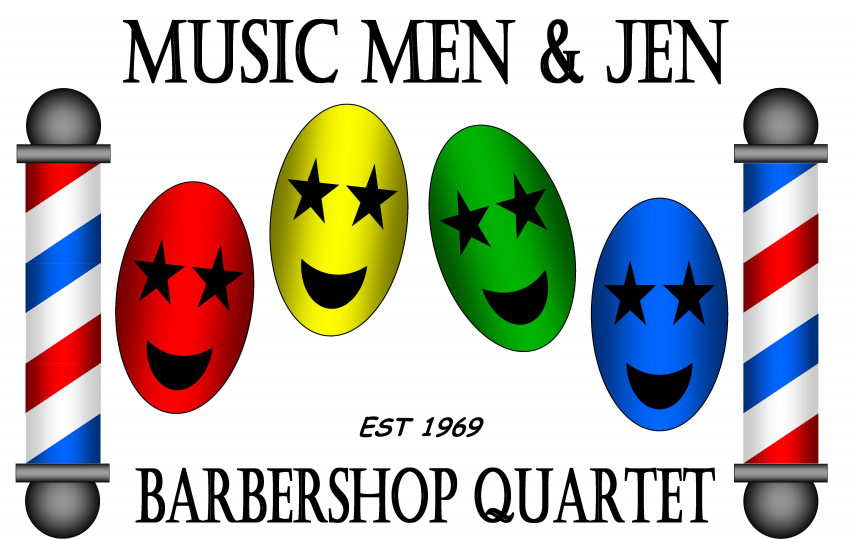 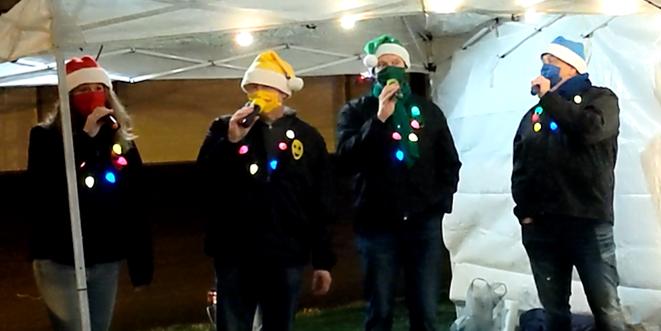 Entertaining in a COVID world, '20 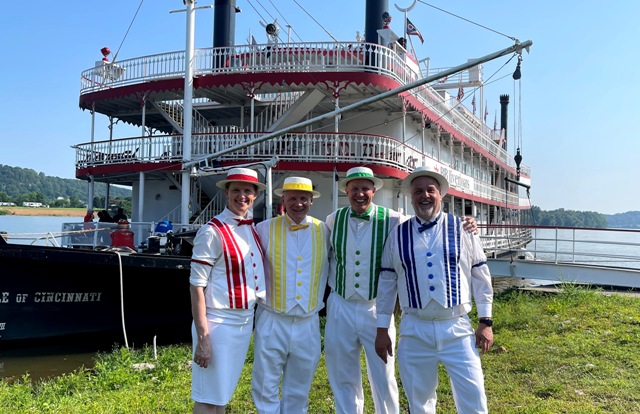 Performance on the Delta Queen, '21

The Music Men & Jen are a fun and entertaining barbershop quartet. They were established in 1969 as the "Four K's" or the "Kiwanis Quartet." Just in time for Christmas, 2019, a new Tenor and a new chapter began as a mixed barbershop quartet. Christmas, 2020, brought a new Lead and solidified the need for a name change, but with the same goal as from the beginning: entertaining audiences with a mix of music themes in the barbershop style. The Music Men & Jen have a Christmas set list and a "rest of the year" setlist. Performances typically last 40 minutes.

Music Men and Jen - So delightful!

These folks are fun! They sing well too! Hired them for my brother’s surprise 80th birthday party and they didn’t disappoint. They were on time which was key to the surprise. All of us enjoyed them! We will recommend them for sure. Thanks for a wonderful experience.

75th Birthday event in a private room in a restaurant. Including a couple noisy grandchildren and late arriving guests. They remained courteous throughout. Flexible beyond belief. All that after a 1 hour drive!
They provided so much move than just great singing. Amusing anecdotes with friendly banter. Even a custom Happy Birthday song. Worth every penny and give 'em a great tip.

The group was very accommodating to the families on our big river boat ride. This was the first time that many had seen or heard a barbershop quartet. They are a very professional group.

A great group of people. Very nice and were punctual. Social distanced and was able to perform with their masks on. That was quite a feat.
My mother in law enjoyed the performance.
Thank you

We had a great time entertaining! Thanks for the shelter and heat...and the delicious brownies!

Easy to book and great performance!

The Music Men of London (Ohio) performed at the retirement community where my parents now live. The group is enormously talented, and the audience loved them. I plan to book Music Men again as often as I can.

This is the 4th year we have had them perform and they are getting better every year. Fantastic harmonies and very professional response to questions.

These guys now come every year to sing. They ooze Christmas Spirit! No one could possibly fail to get caught up in their infectious , fun spirit. They are excellent vocal musicians, of course, but their personalities and presentation make them exceptional.

This has become a Christmas tradition for us as well! We're always up for sharing our music all year long with those willing to listen!

Our people really enjoyed the Music Men of London. Their concert was certainly entertaining with a good variety of selections, and they themselves were personable and fun. We applaud them for the good night they gave us and would have them back sometime if the occasion calls for it.

A Welcomed Surprise for Wedding Guests

My husband and I decided to go a little no traditional with our favor for guests at our wedding. We had the Music Men of London perform 6 songs for our guests as a surprise thank you. The guys in the group showed up on time, in appropriate attire and preformed phenomenally. We received so much amazing feedback from our guests; we would not have traded the experience of getting to here these guys for anything!

These guys really know how to entertain. My mother-in-law had just gone through some rough medical issues and needed cheering up. Not only did they lift her spirits and inspire her, but the crowd was thrilled and everyone went home that night feeling happy and celebrating life. If we could put their performance in a pill we could make billions!

Communication was speedy and reliable, Price was well within normal expectations, Performance was spectacular. I would definately hire them again.

The All stars in the Converse name

The guys were not only talented but very impressive. I plan to book them as often as I can for our social functions. Gigsalad is the most professional avenue for bookings of this sort. Thank you all for your "Top notch" service.

Ed, we were most impressed by your hospitality and generosity. We look forward to the next occasion where we'll be able to help you out. Thanks for taking the time to leave a review!

Music Men of London were awesome! They entertained the crowd! It even started raining at the end of their concert, and they came inside and sang through the halls of our skilled nursing facility for all of our residents. They were very polite and easy to work with. We will have them again at Heartland of Marysville. We are already planning on having them come again. Thank you Music Men of London!

The music men of London did a super job. They always responded quickly to any questions or request. My mother lives in Ohio, I live in Texas. I wanted to do something special for her birthday. I found them through a web search and could not have been more pleased. My Mom went on and on about how wonderful they were. I was very impressed with their talent and professionalism. I would highly recommend them.

Fun! We not only have a catalog of songs, but often a LOT of off-the-cuff quips, observations and anecdotes in between our selections.

Craig, Jen, Paul and Steve are the latest iteration of a barbershop quartet begun way back in 1969 in London, Ohio, called the Four K's or Kiwanis Quartet. Craig is now the "elder statesman" of the group, having started out as the Tenor in 1998 when the group was known as the Music Men. Paul was brought on board in 2005 by the founder, Baritone and organizer, John Ewart. Craig (Baritone) and Paul (Bass) anchored what was then known as the Music Men of London until 2019, when Jen became the new Tenor in time for Christmas, necessitating some kind of name change. Steve joined as the new Lead in time for Christmas, 2020, solidifying the decision to remove "London" from the Music Men of London. Technically a mixed barbershop quartet, Music Men & Jen seek to entertain audiences around central Ohio and beyond, wherever gig requests take them.

We have our own portable PA system

We do not require much space. We are as comfortable in a concert hall as we are in someone's living room (sometimes we're a little TOO comfortable!). We can perform in one spot or wander a room or the grounds. We are flexible.