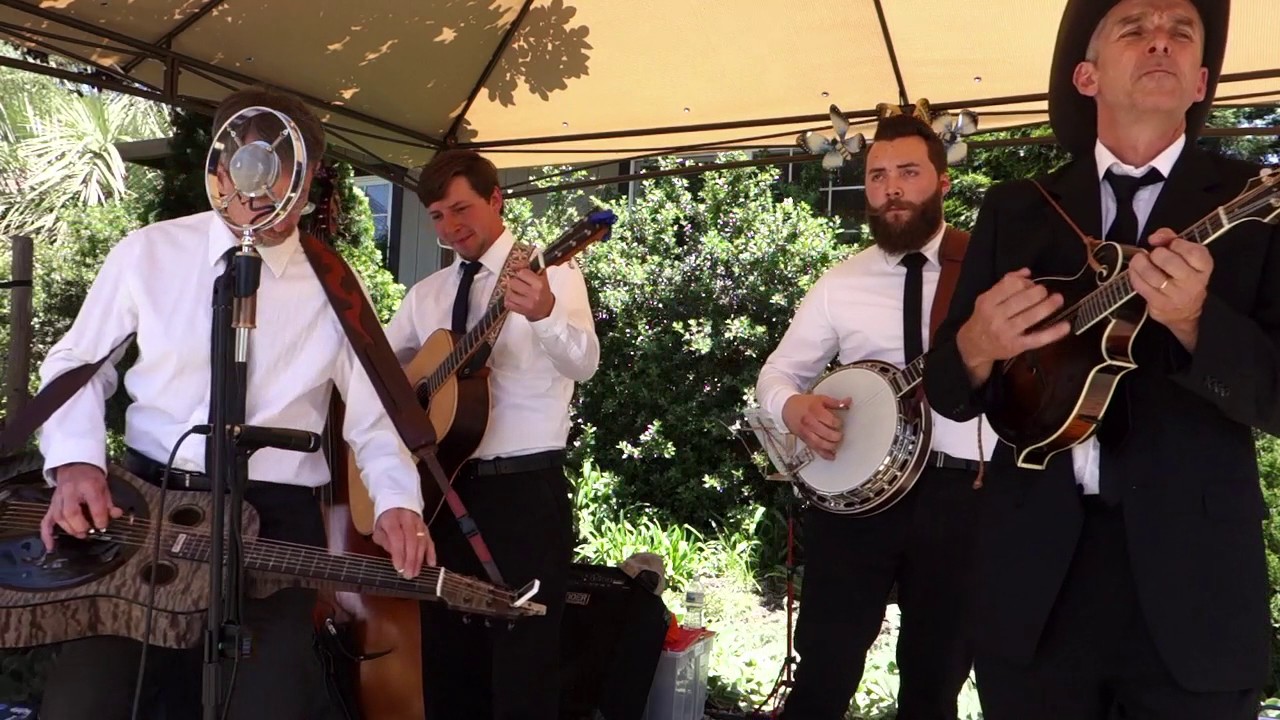 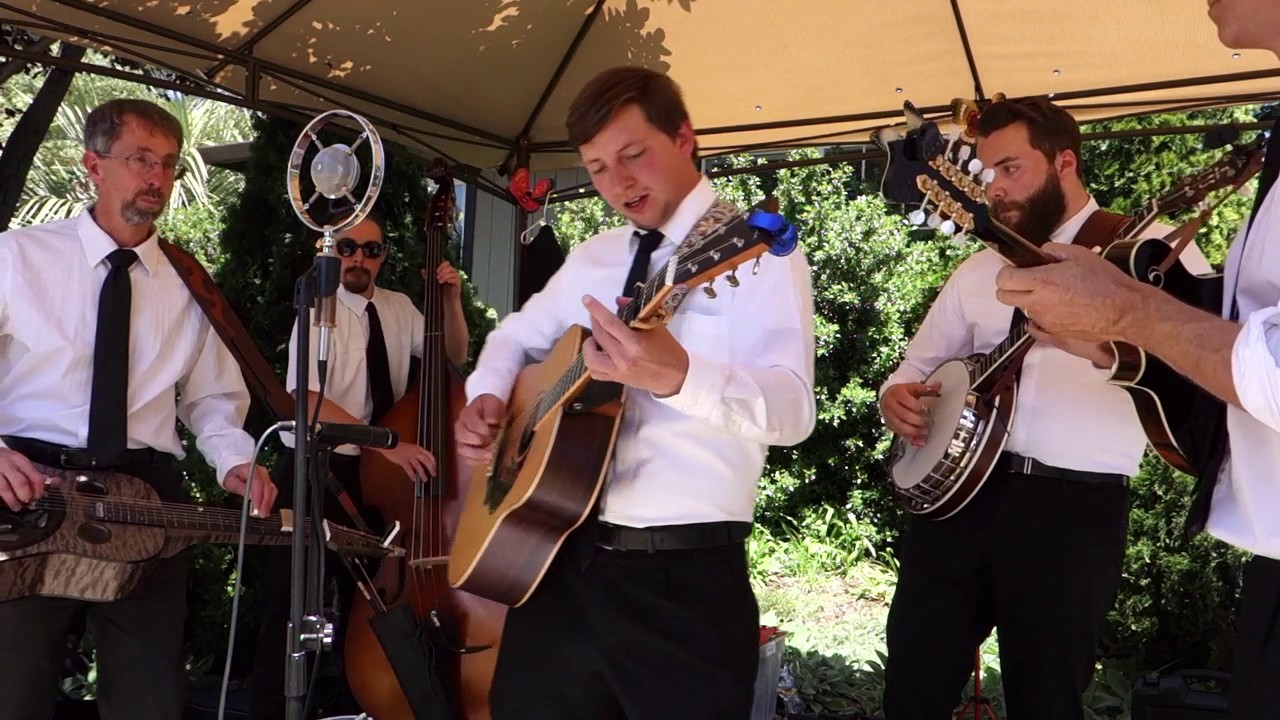 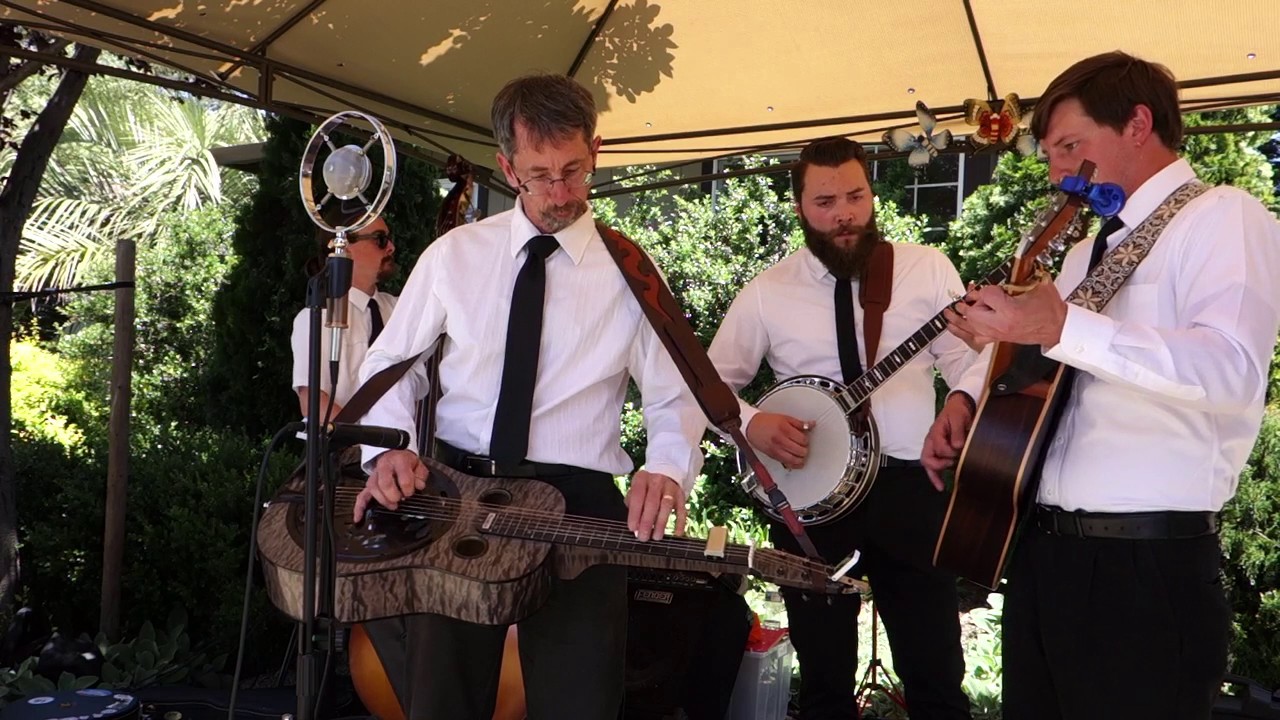 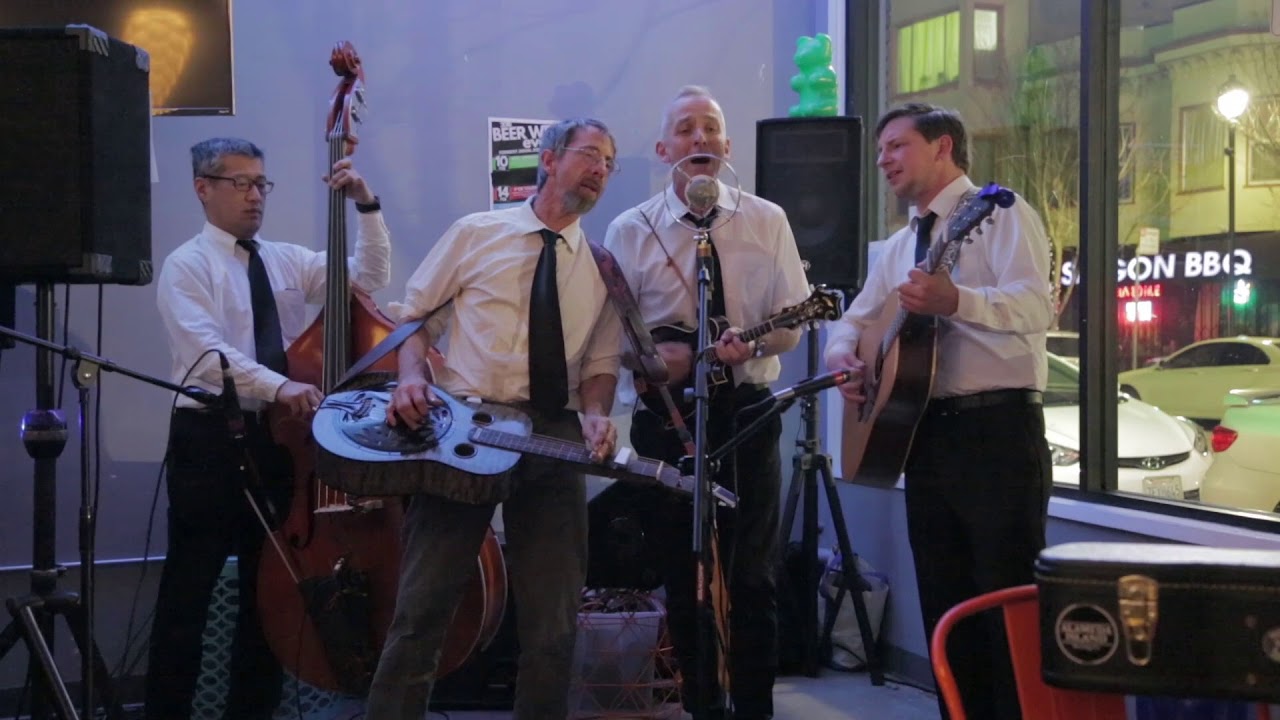 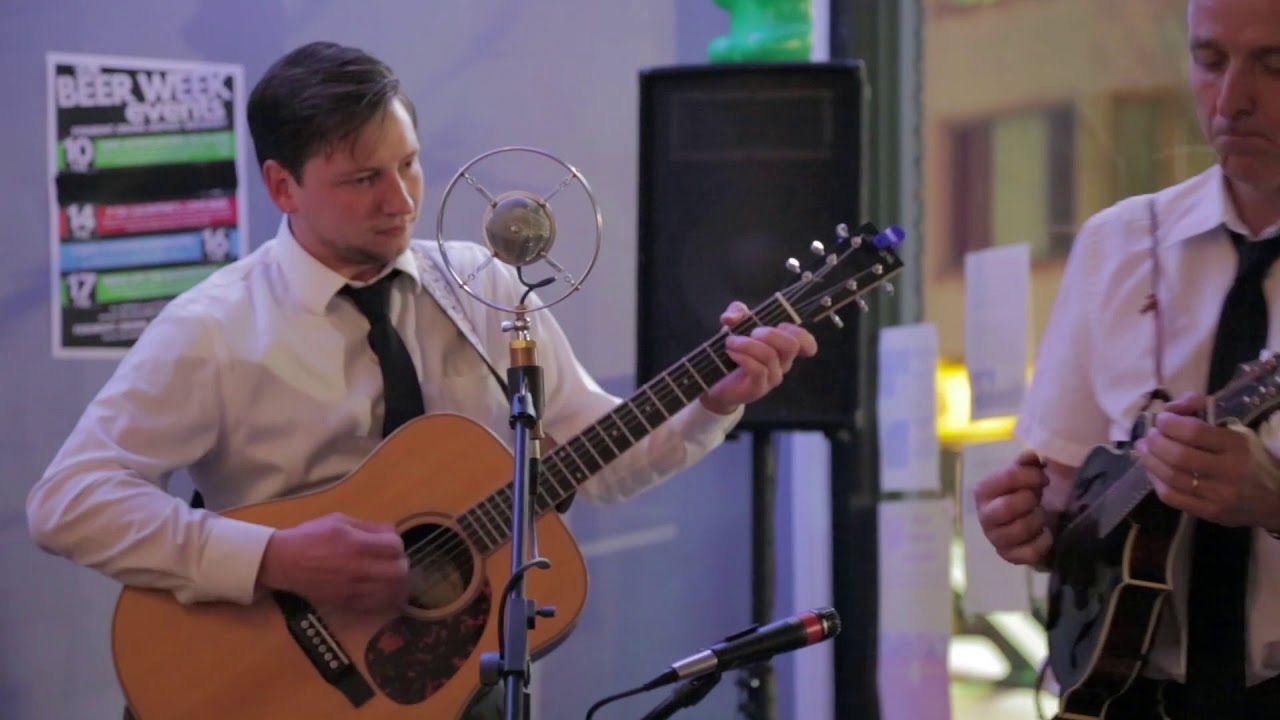 Dust in a Baggie 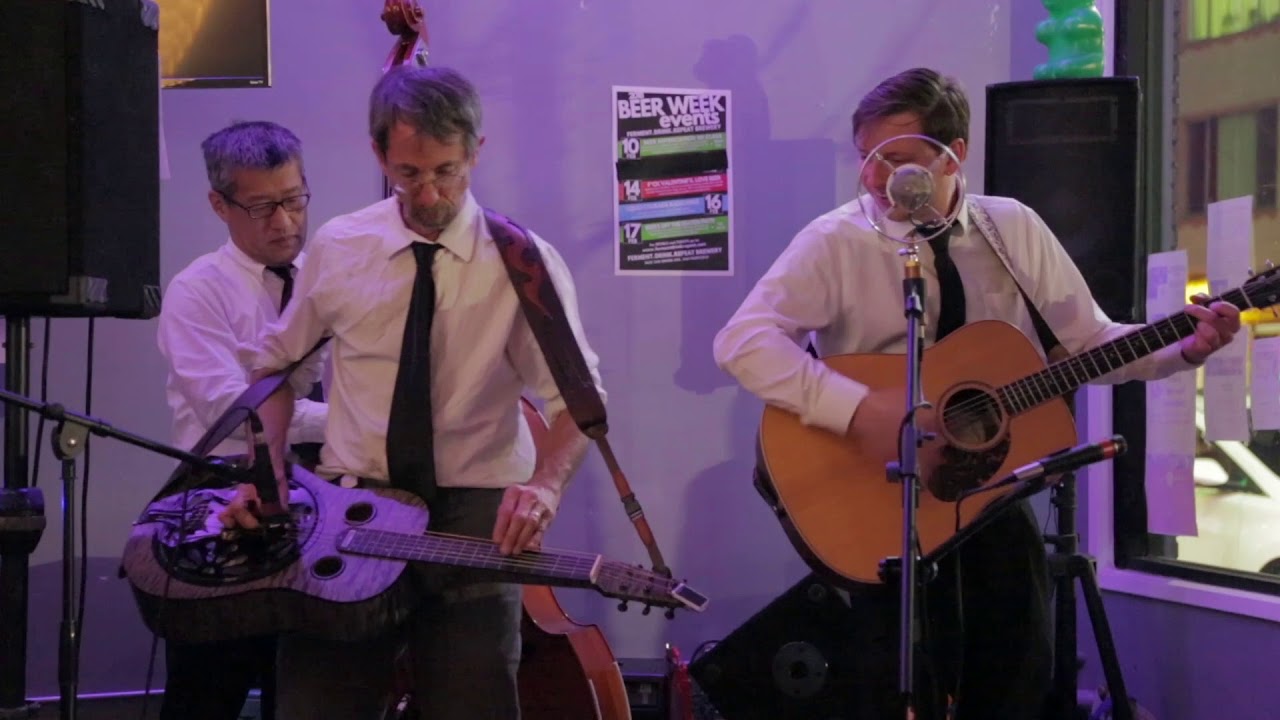 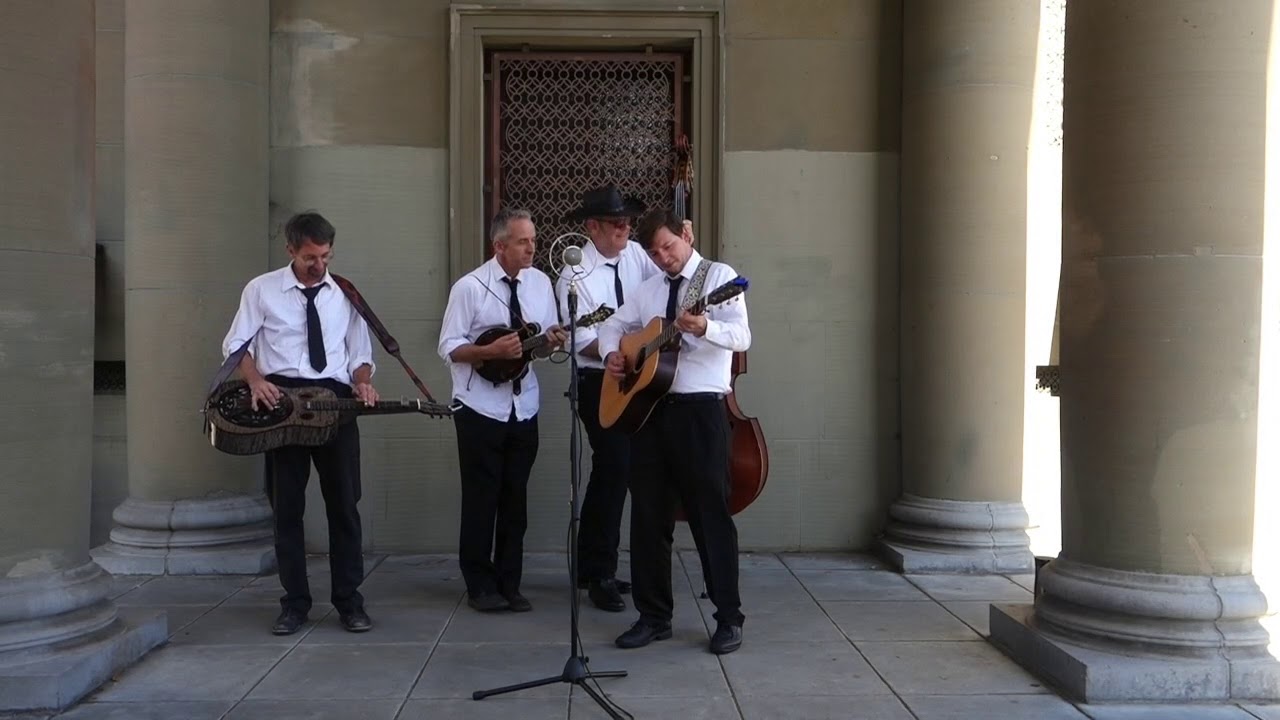 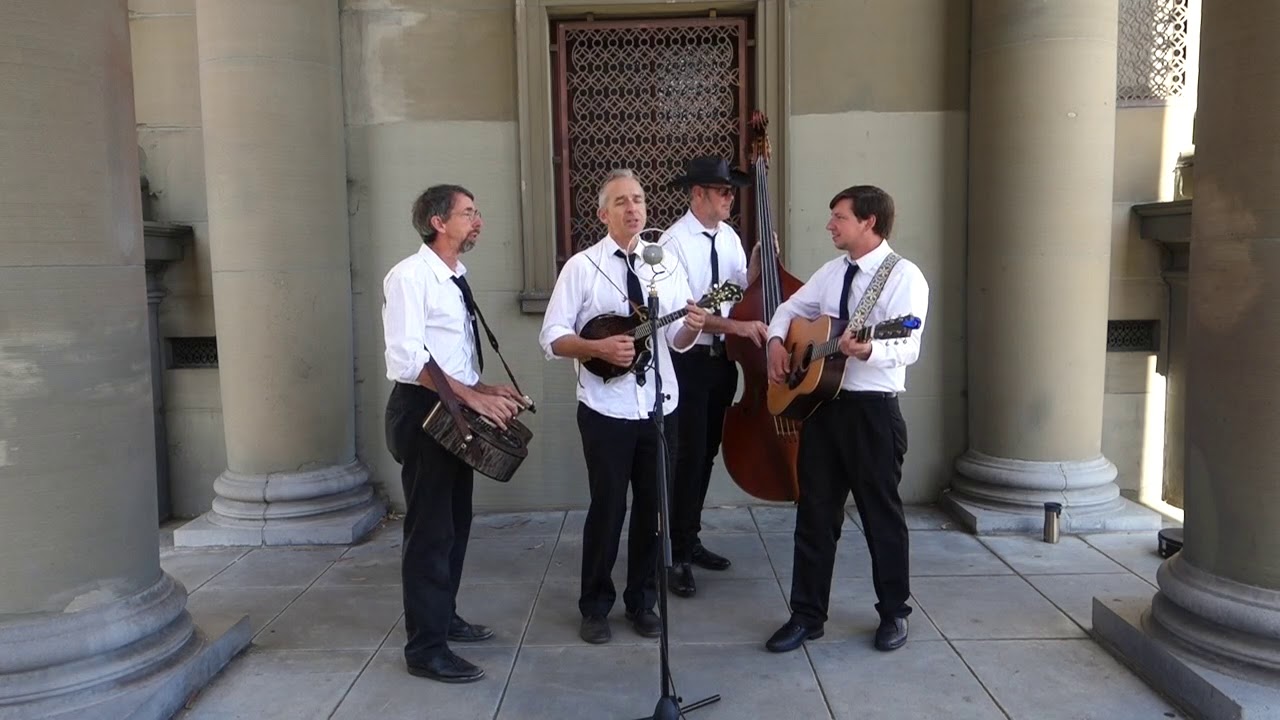 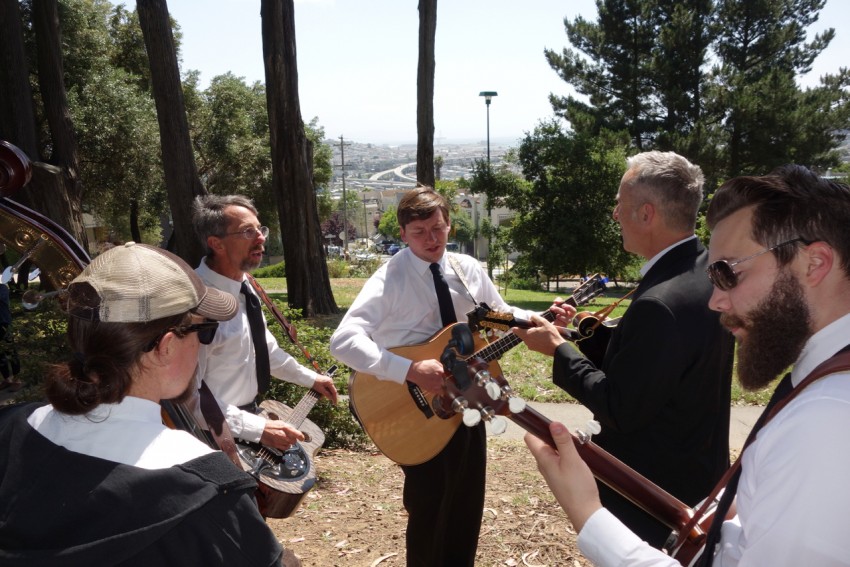 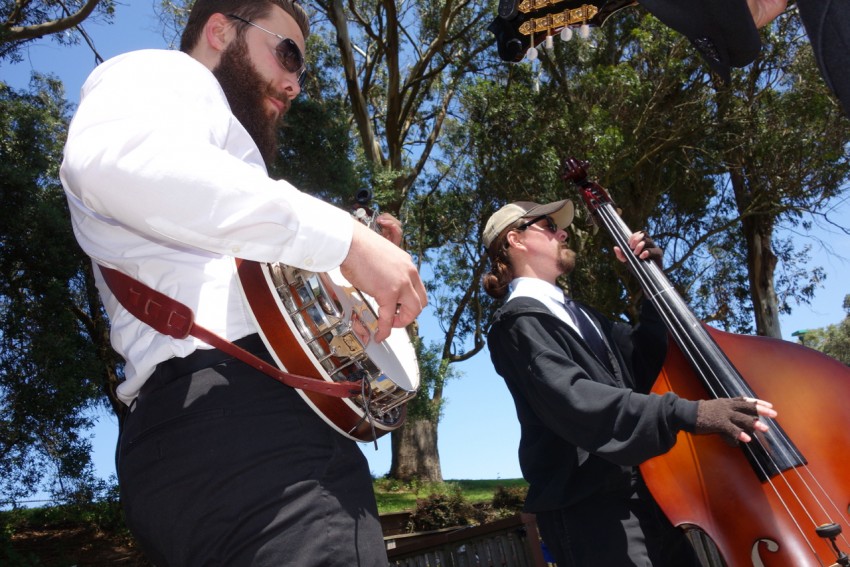 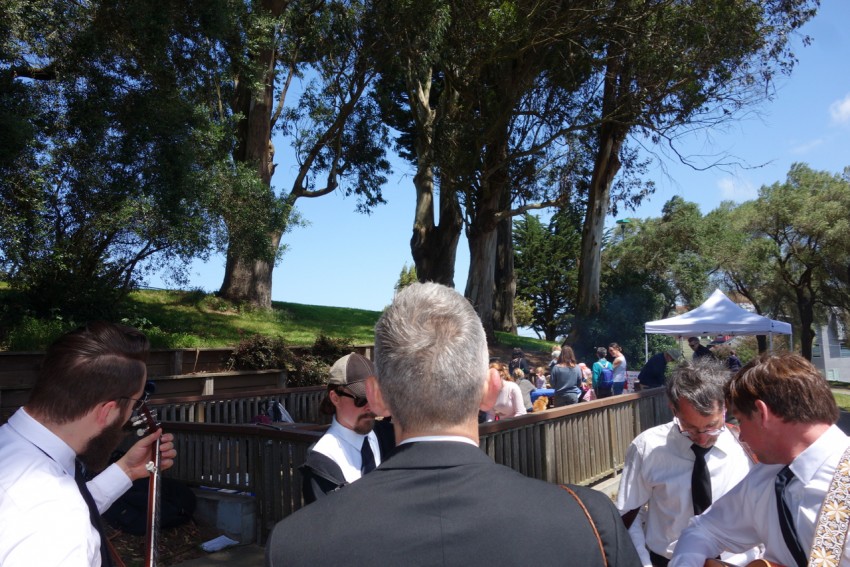 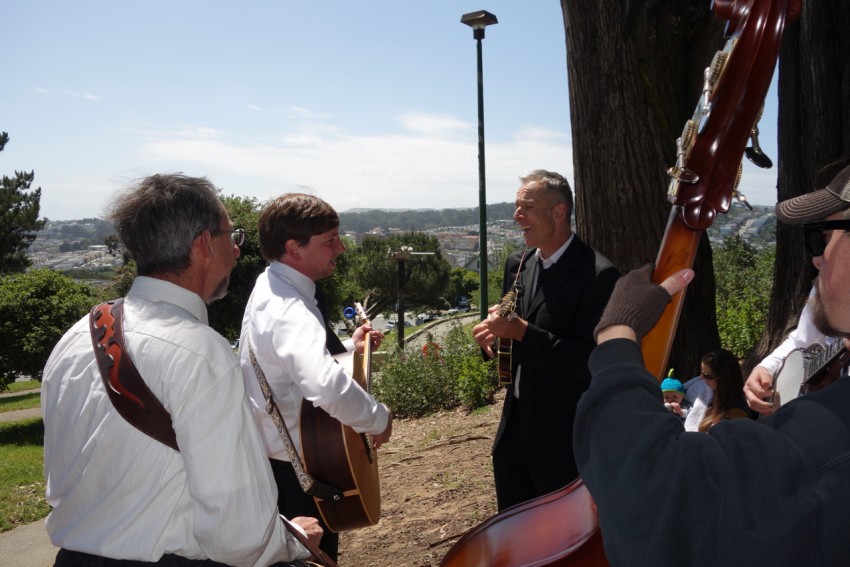 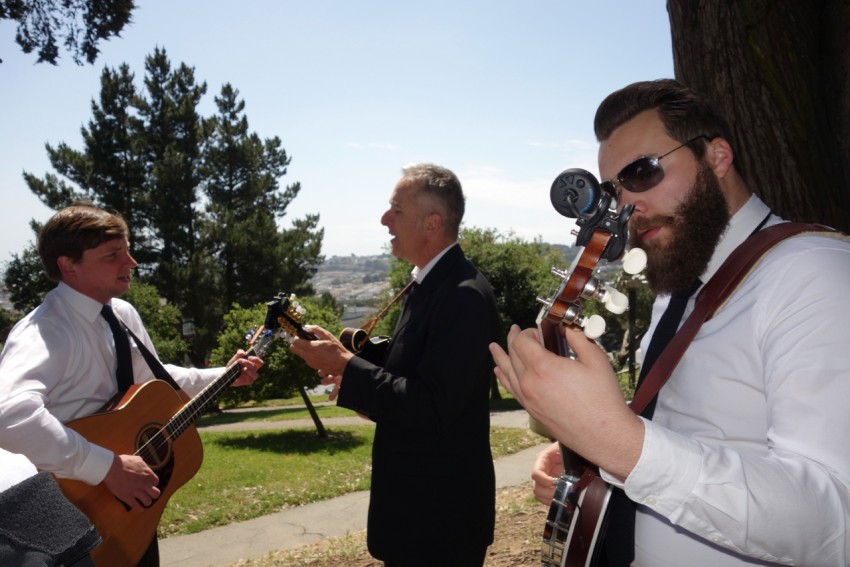 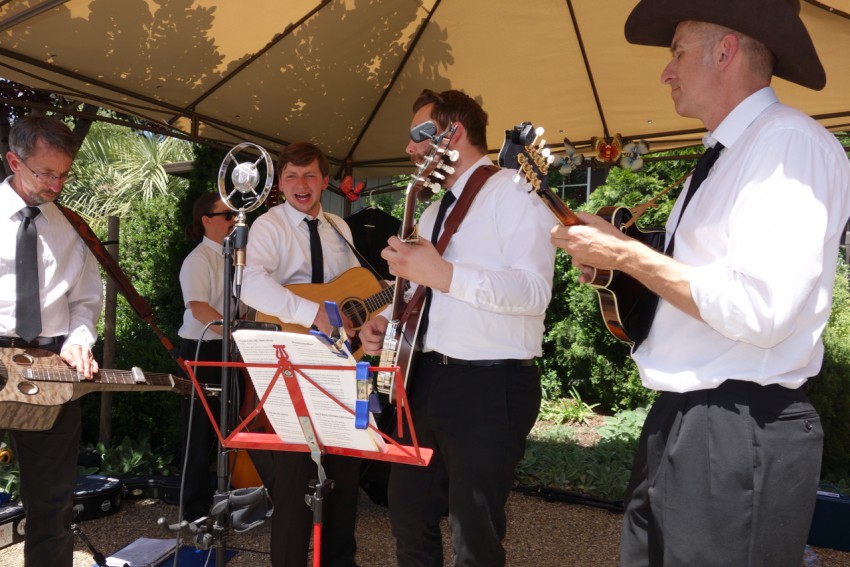 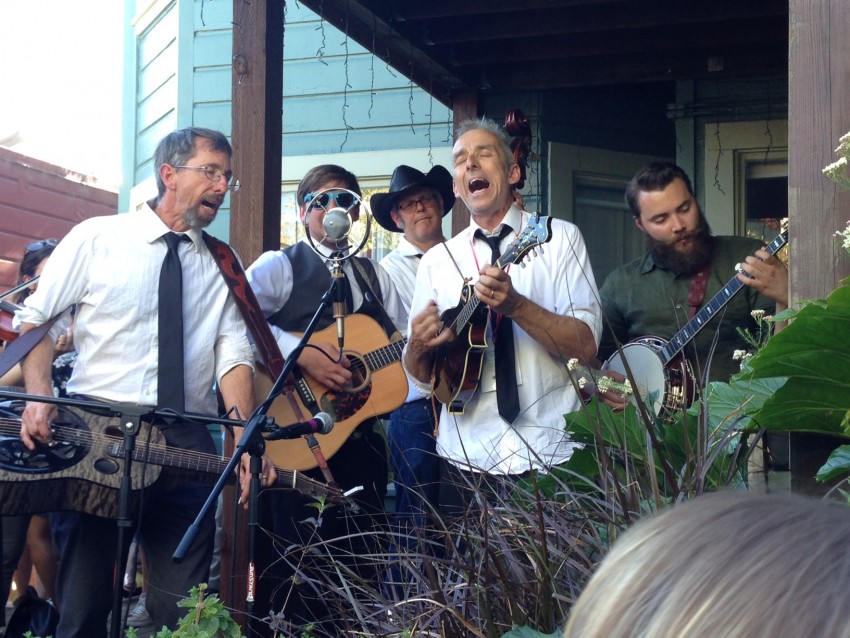 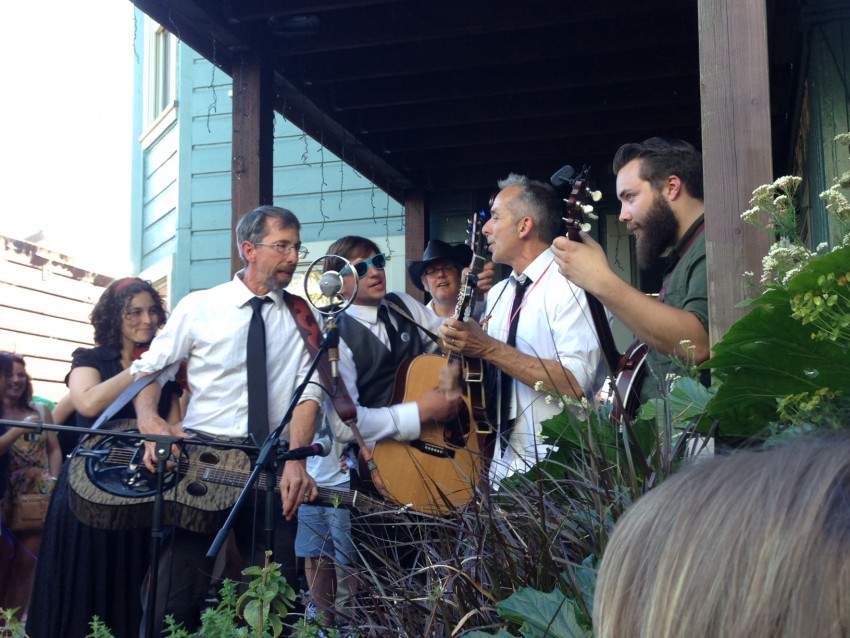 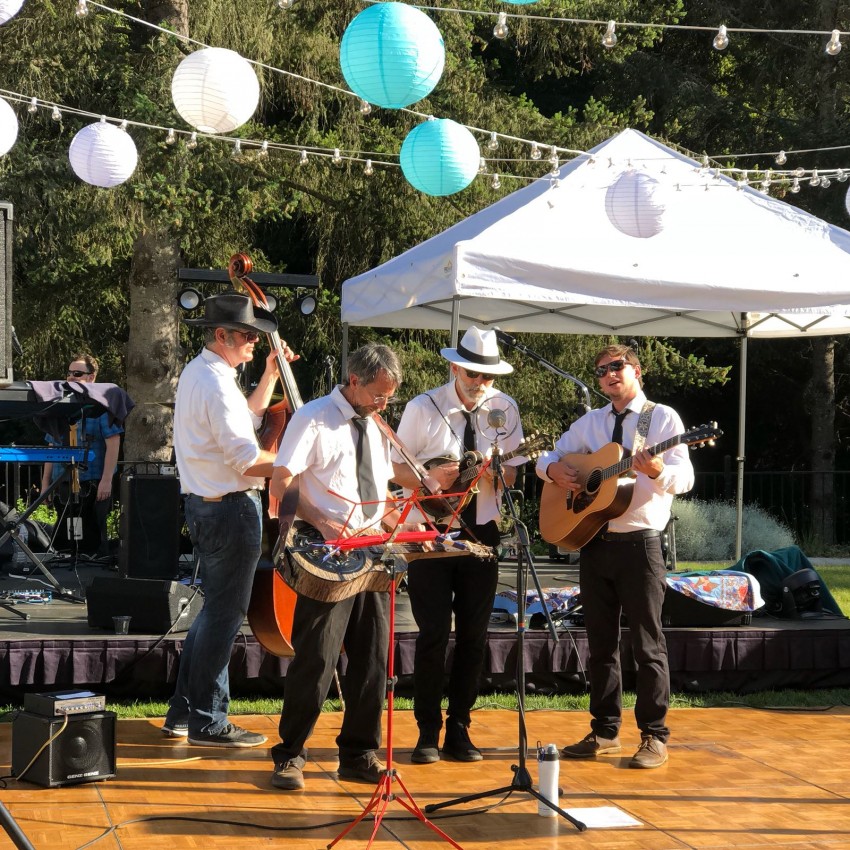 Muleskinner Stomp is a hard-driving contemporary bluegrass band that plays foot-tapping music with beautiful melodies and sweet harmonies. We write a lot of our own music and arrange our songs carefully. You will rest assured that we will be on time and easy to work with, which are critical in hiring a band. We always consult with you to included your input. Our songs range from bluegrass standards to singer-songwriter and rock songs performed in a bluegrass style. We have been playing professionally for over seven years and simply love this kind of music. Read our reviews: we really put our hearts into our performances and think you will love our band.

We hired Muleskinner for the cocktail hour during our wedding and it was a big hit! Our friends and family loved them, and it made such a big difference to be out on the lawn listening to the sounds of wonderful bluegrass. Jim was great to work with throughout the planning process - very responsive and accommodating, able to add in a few last-minute requests. We were in a large outdoor venue and the sound traveled really well. Would definitely hire them again and hoping we can catch a few of their performances in SF :) Thank you!!

Thanks for your kind words, Adeline. We had a great time performing at the stunning location for their wedding.

We hired Muleskinner for my husband's birthday party at our home. I can't say enough about the group and what a great time we all had. Jim was very easy to work for all of the upfront details. Their music was great! Guests are still raving about the band. It really could not have been better. Thanks Muleskinner!!

We hired Muleskinner to play during our wedding ceremony and during cocktail hour. They were seamless through the ceremony - hitting the different songs at exactly the right time, and they were fantastic during the cocktail hour. We couldn't have been more happy with their performance. Many of our guests have told us that the band was their favorite part of the wedding - and we would agree! They were accommodating and were even able to play a few specific songs we requested. So easy to work with and such a great band! Do yourself a favor and hire them for your next gig! You won't be disappointed. Thanks guys - you rock!!!

Awesome for our house party

These guys were on time, professional, and very talented. All of our friends asked about them and were complimentary of how great they were for setting the vibe!

Thanks for the nice words - we thought the party was jumping and really fun.

These guys are amazing!!

I hired Muleskinner Stomp to play in our backyard for my wife's 40th birthday and they absolutely made the party. They were professional, easy to work with and showed up early so that they had plenty of time to set up and even practice several songs before guests arrived. We were BLOWN AWAY by their talent! The music was incredible and exceeded expectations. They even stayed past the booking time to hang out for a bit and were so much fun. Genuinely nice, interesting guys. Our guests raved about their music and still bring them up months later.

We recommend them wholeheartedly!

Thanks Ronan - we were about to say that Ronan and his friends were also amazing! They were so welcoming and friendly.

Muleskinner Stomp made the event a success!

Jim and his friends were the perfect addition to my husband's memorial reception.

These guys were amazing. So professional, prompt and willing to go with the flow. Their music is great and I would highly recommend them to anyone.

This band was professional, fun, and a fantastic addition to a birthday party. I could not recommend them more!

This was said by many individuals. Their music and vibe fit perfectly in with the audience. Everyone had a lot of fun. Also, they were easy to work with and all pre-event prep ran smoothly.

Thanks Duyen - we had so much fun at this gig, because so many people at this party were also having such a good time. We can't wait to come back and play again!

Muleskinner Stomp played at our 25th wedding anniversary party a few days ago. They were the perfect touch for our festive and casual party of over 110 guests in our event space at the Redwood City Womans Club. Jim was very helpful and professional in setting up the booking with me and Gigsalad made it super easy. These guys obviously enjoy playing together so it was a treat to have them play for our special occasion. We love bluegrass and would defintely recommend Muleskinner Stomp to anyone looking for an a band!

We hired Muleskinner Stomp as a surprise for my daughter’s wedding. Jim was a pleasure to work with and very patient with me trying to choose music without spoiling the surprise for my daughter. The band was amazing!
My daughter said “ This is like a dream wedding with a perfect live bluegrass band.”
They played as the guests arrived, and then a lovely processional. It was a small backyard wedding, and the band moved around as seemed fit during cocktails. The bride and groom started dancing and soon most of the guests joined in!
While the two Chis’s had to leave after cocktails, Garret and Matt stayed for dinner. They were both charming dinner companions and everyone enjoyed chatting with them.
I will absolutely hire this band again!!

End of The Era Party

What a fantastic night with Muleskinner Stomp! I was pulling together a very fast graduation and moving party, requested some alternatives on GigSalad when the initial band I requested was unavailable, and MS contacted me immediately. They worked with me quickly, added my gig to the evening after playing earlier in SF. They were crazy professional, joyful, a great mix of band members and created an epic sound in the large outside garden. My only regret was my friends left too early, as I wished they played all night! They were packing up and I hadn't realized they played their last sound, so they pulled their instruments back out, came inside where last friends were hanging out (photo attached) and played one more fantastic song. Everyone loved them and the entire night. Thank You!

Thanks Michele - we loved your free spirit and great enthusiasm. Hope you are enjoying your next stage in life!

We hired Muleskinner Stomp to perform at our Kentucky Derby themed baby shower of about 35 guests in an outdoor courtyard. Communication with Jim before the event was a breeze. All four members of the band were on time and congenial with the guests from the start. They played a really long, wonderful set of music that really got the crowd going as they mingled about. Smiles all around. I would 1000% hire them again. A truly wonderful bunch of musicians.

They played our block party and everyone loved them. If you want friendly, high energy and very talented musicians, look no further.

Thanks for the note, Jessica. We had a lot of fun at the party, in spite of practically melting in the 100 degree heat.

We hired Muleskinner for a lobster and oyster party and they were awesome. Jim was really easy to work with and this was a last minute booking and so worth it!

We hired Muleskinner to play for our back to school night and BBQ and they were a hit! All of the parents commented on how delightful they were and how they wanted to book them for their own personal events. Extremely professional and friendly. We will definitely want to have them back again.

Nobody From Nashville was great addition to our party

We had a bluegrass and bourbon theme 50th party and Nobody From Nashville absolutely exceeded our expectations. Jim was thoughtful of our budget and communicated with me leading up to the event. He and his crew are professional, fun and played fantastic. I loved how they are local to the city. I would definitely recommend them or check them out at SFporchfest (http://www.sfporchfest.org).

I had Nobody From Nashville play at a birthday gathering in Golden Gate Park and it was perfect. They play great together and the setlist was a perfect combination of old bluegrass standards and some non-bluegrass tunes sprinkled in; overall great song selection and band.

Great band that delivered as promised - enjoyed by all.

Our event was a school BBQ with a barn dance theme. NFM was a great fit and had everyone dancing.

Great group of guys with a fun sound!

Hired this band for a whiskey tasting/food event. They were really fun and sounded great! Easy to work with and a reasonable rate. I'd hire them again.

We always arrive early so that we are ready to go by the agreed starting time. We either play unplugged in an all-acoustic format – or we set up the PA an 1 hour in advance so that we can reach your audience better. Often a gig has different phases and sometimes the band needs to be quieter and other times it needs to be louder: we work with you to set the guidelines. If you need to make announcements over the PA, you are welcome to do so. If you want to supply custom music over the PA while we are on a break, you are welcome to supply a phone/tablet and we will hook it up for you. We will work with you to customize our set list if needed, and we can work up specific songs to play if you request them. We will take down the PA and load it - you do not have to assist us.

We perform original material, in addition to incorporating multiple musical styles including rock and roll, country, and singer-songwriter. What you will see is our enthusiasm, our high energy, and our joy as musicians. Do you want a band that has a high-energy enthusiasm on stage, yet can also deliver powerful poignant vocals? Well, this is your band.

Professionalism is paramount to this band. You will be hiring a band that shows up on time and dresses impeccably in their white shirts and black ties. They are serious about their music and this is clear in their craft. Their personnel reads like a who's who in Bay Area bluegrass: band members come from legendary bands such as Beauty Operators, Nobody From Nashville, Rusty Springfield, and Byron Station. They are not your father's bluegrass band. Their instrumentation includes guitar, bass, mandolin, and dobro. They perform in the greater San Francisco Bay Area and Northern California. They play a mixture of traditional bluegrass songs, non-bluegrass songs, and original material. They perform work from artists such as Bill Monroe, Old Crow Medicine Show, Gillian Welch, Tim O'Brien, Justin Townes Earle, Billy Strings, 3 Tall Pines, Dwight Yokam, Jimmy Martin, and the Rolling Stones.

We set up and break down our PA. We just need a power source: any household circuit will suffice. We have also performed acoustic only and have used a generator.

We bring all our own equipment.