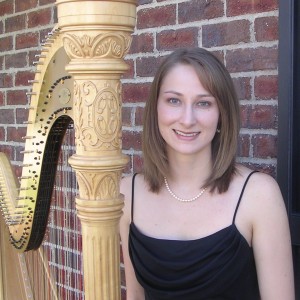 Megan Kabela has performed harp for weddings, receptions and various other events for over ten years. She provides music perfectly suited for your event and brings a professional and yet personal touch to each event.

Be the first to review Megan Kabela, Harpist

Megan Kabela is an active musician who has recently relocated to Knoxville, Tennessee. Recognized as an accomplished and versatile harpist, she performs in a variety of different styles and venues.

Megan started her musical training at the age of 10 on the piano. After mastering the basics of piano and starting violin lessons, she decided to add harp into the mix. Megan is classically trained in concert harp, having studied with Jara Goodrich (principal harpist of the Portland Symphony Orchestra in Maine) and Suzanne Young-Davids of Elkhart, Indiana (former harp instructor at Valparaiso University).

For over 10 years, Megan has performed harp at weddings, receptions, luncheons, anniversary parties, Valentines dinners and holiday parties. Her repertoire includes classical, romantic, popular, religious & sacred, and holiday music that can be perfectly suited for any event. She will work with you to select music your guests will be sure to enjoy!

Megan is a lifetime member of the American Harp Society.

I bring all the equipment I need to each event.