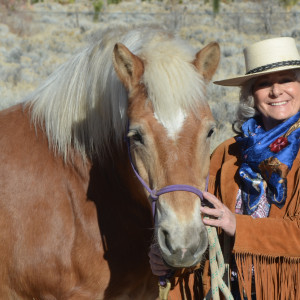 Terri Jay is an Internationally acclaimed medium, intuitive, pet psychic, horse whisperer and more. She provides incredibly accurate, detailed readings for audience members and includes audience participation so everyone knows the accuracy of the readings. She is larger than life and hilariously funny. Since Terri does most of her work by phone, pets do not need to be present for animal readings. She is the only pet psychic doing shows in the U.S. and she is also a pet medium. Terri shares her 25 years of knowledge with the audience to inform and enlighten.

Be the first to review Medium, Intuitive and Pet Psychic Terri Jay

After a brief intro, Terri will share how she discovered she was intuitive. Then she immediately goes to the audience and will ask each person who wants a reading, "How can I help?" Then if she needs more information to connect to either a person or pet, she will ask for it. The audience will know the validity of the reading because Terri will ask for feedback to verify the information she receives from each person receiving a reading. Throughout the show, Terri will share insights about physics, that everything has a vibration and frequency and how physics figures into this work. She will also share information on how people can release negativity and heal their lives. Everyone will leave feeling lighter and uplifted.

Terri Jay is an Internationally acclaimed Medium, Intuitive, Pet Psychic, Horse Whisperer and more. She has had shows at casinos in Reno, Nevada and other venues. Not only is she hilariously funny, but she is sensitive to the feelings of the audience members when needed. Since she does most of her work by phone, Terri can do readings on all pets without the pets having to be present. Terri found out she was intuitive when providing a horseback therapy program for disabled children and she "heard" a non-verbal child. The suggestion was made to learn to communicate with the horses and one thing has led to another. Now Terri knows there are no limits to the types of information she can receive. "I'm just like a big cell phone tower," Terri says. With just a few pieces of information, I can tune into a pet or person who has passed and receive detailed information which can be very healing for my clients.

Terri often talks about the weirdest readings she does, such as diagnosing what is wrong with a vehicle correctly, or helping a computer software engineer with code writing problems, or helping someone to heal a past-life issue which has manifested as a health issue in this life. She is warm, kind, engaging, entertaining and really funny. She is also renowned as a medical and veterinary intuitive. She regularly communicates with both people and pets on the Other Side, particularly when helping people deal with the loss of a loved one. Terri also has the unique ability to communicate with people who have communication disorders such as autism, Alzheimer’s, traumatic brain injuries, coma, etc.

Terri's love of horses has always figured strongly in her vocations. A native of Cleveland, Ohio, she remembers being drawn to horses at an early age. She began riding lessons and by age 16, she was showing horses on a Class A circuit as a junior rider and also taught riding locally. She went on to attend Ohio State University where she studied Animal Science.

By the mid 1970s, Terri had moved to Las Vegas, Nevada, where she started a free, horseback therapy program for disabled children. In 1985, she moved to Reno to become the first Executive Director of the Nevada Commission for the Preservation of Wild Horses, a position she held until 1990 when she decided once again to offer a horseback therapy program. It was during this time that she discovered her gift for intuitive communication with disabled children that soon grew to include horses, other animals and the deceased.

Terri has always been in front of the media spotlight for her therapeutic riding program, which received local and national coverage. She went on to appear on countless television news shows for her intuitive work, in national and international magazines and newspapers and on the TV series "Texas Justice" as an expert witness. She has appeared on countless news shows and in print media.

Terri is presently working on publishing her book about her abilities and is also developing several television shows for the future.

I need a nice backdrop, a headset mike and a hand mike on a stand.

I have watched all of the other mediums who are doing shows and I was bored out of my mind. It was about as exciting as watching paint dry. Since they only do cold readings, and no one in the audience is allowed to share information, no one in the audience knows what is going on and whether or not the reading was valid. Very few people receive a reading. I involve the audience so everyone knows and understands what is happening. In my last show, I was able to do 28 readings in an hour and 45 minutes with 79 positive responses. This puts my accuracy in the 90th percentile. I do not know of anyone who is doing all types of readings that is doing shows, especially pet psychic readings.