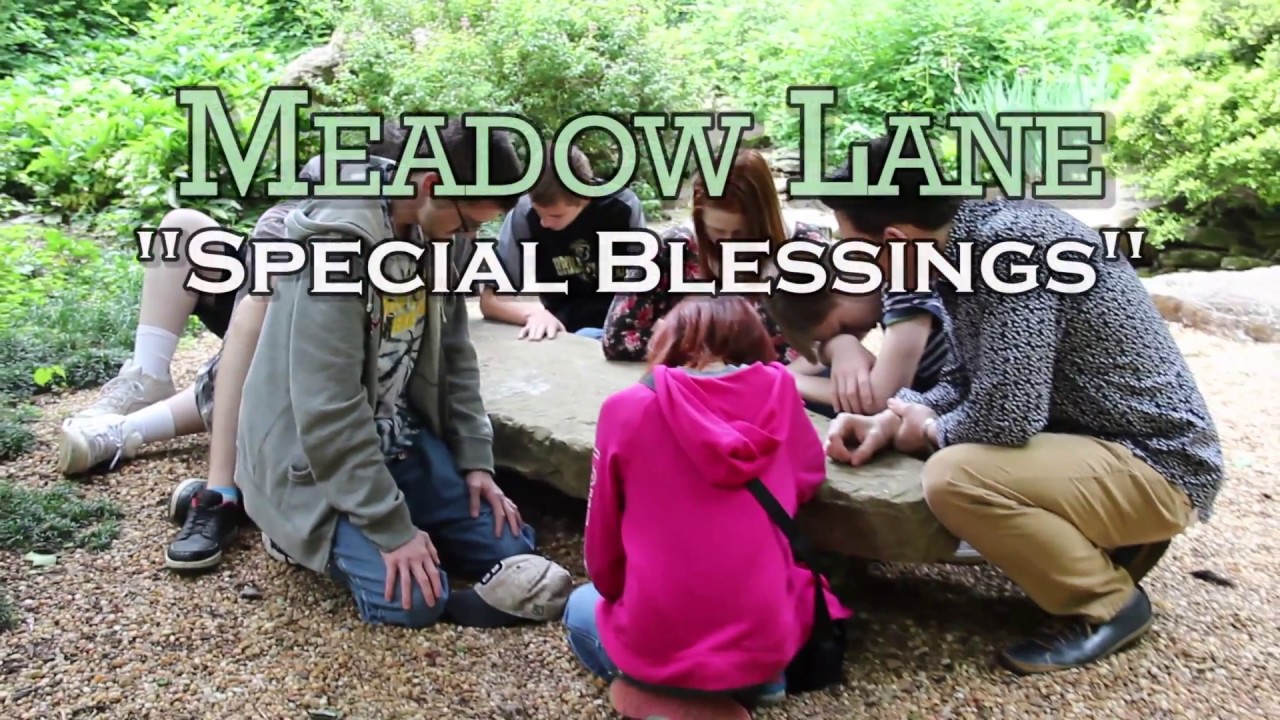 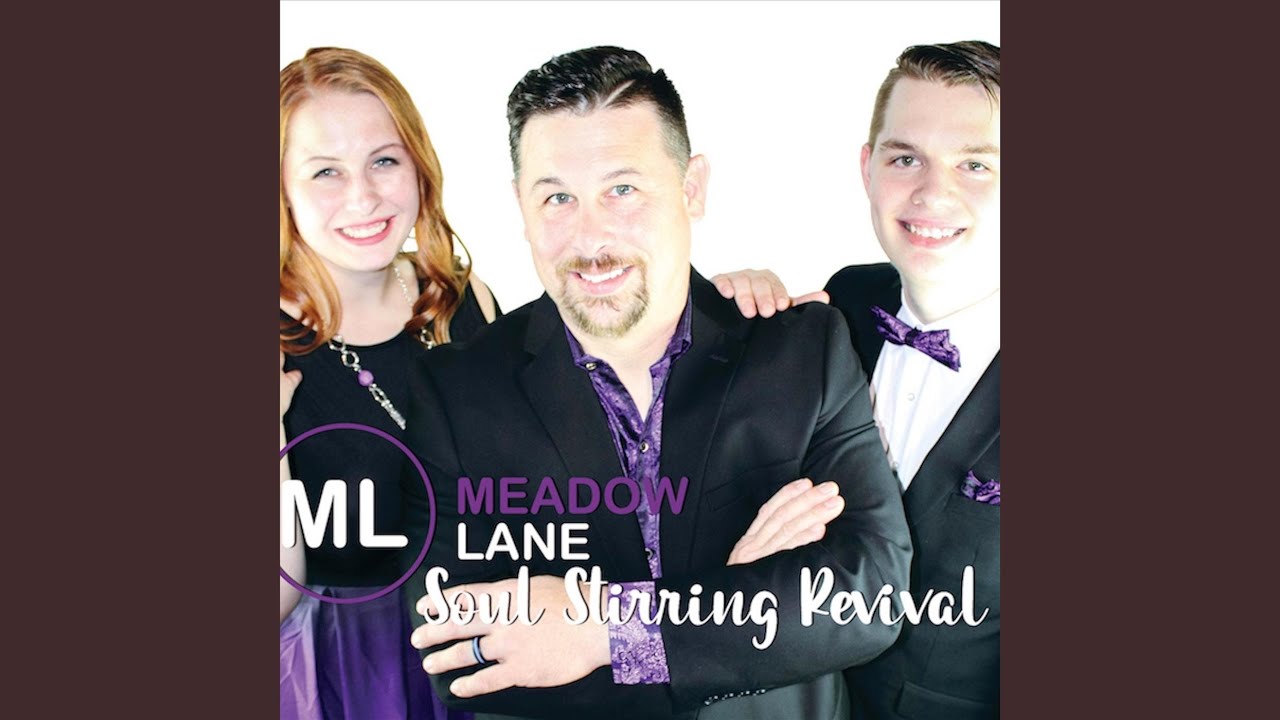 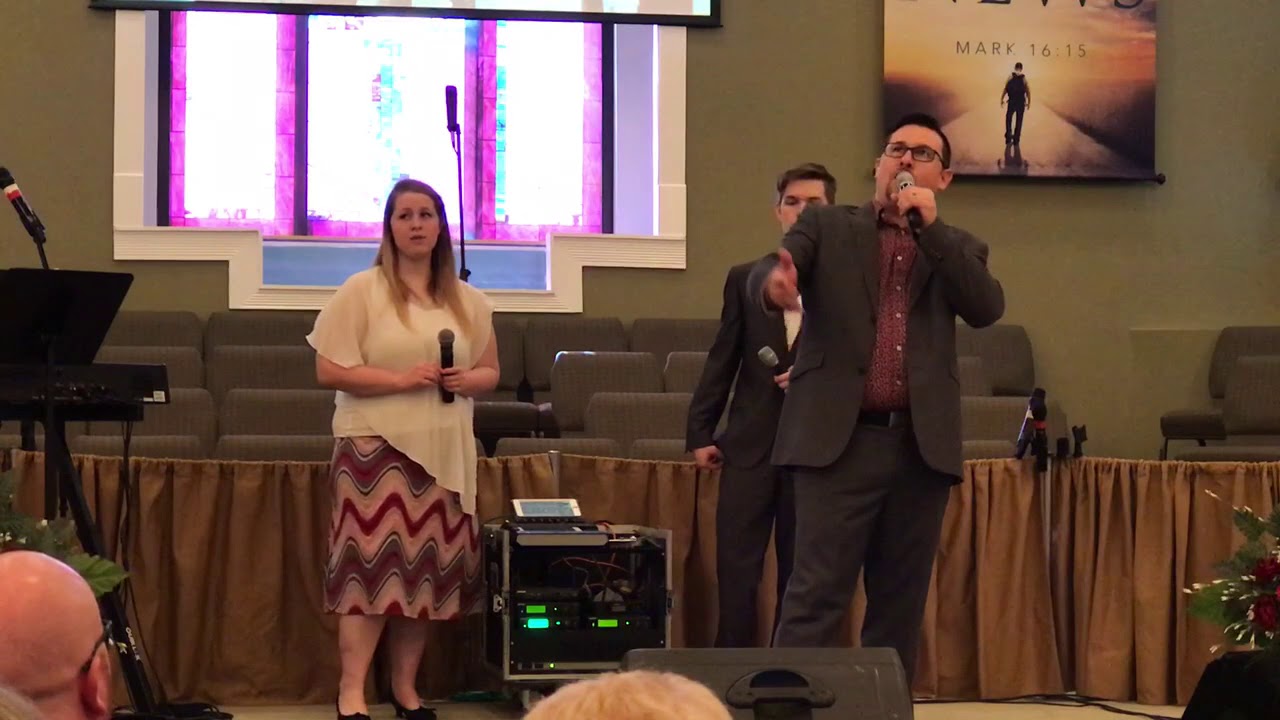 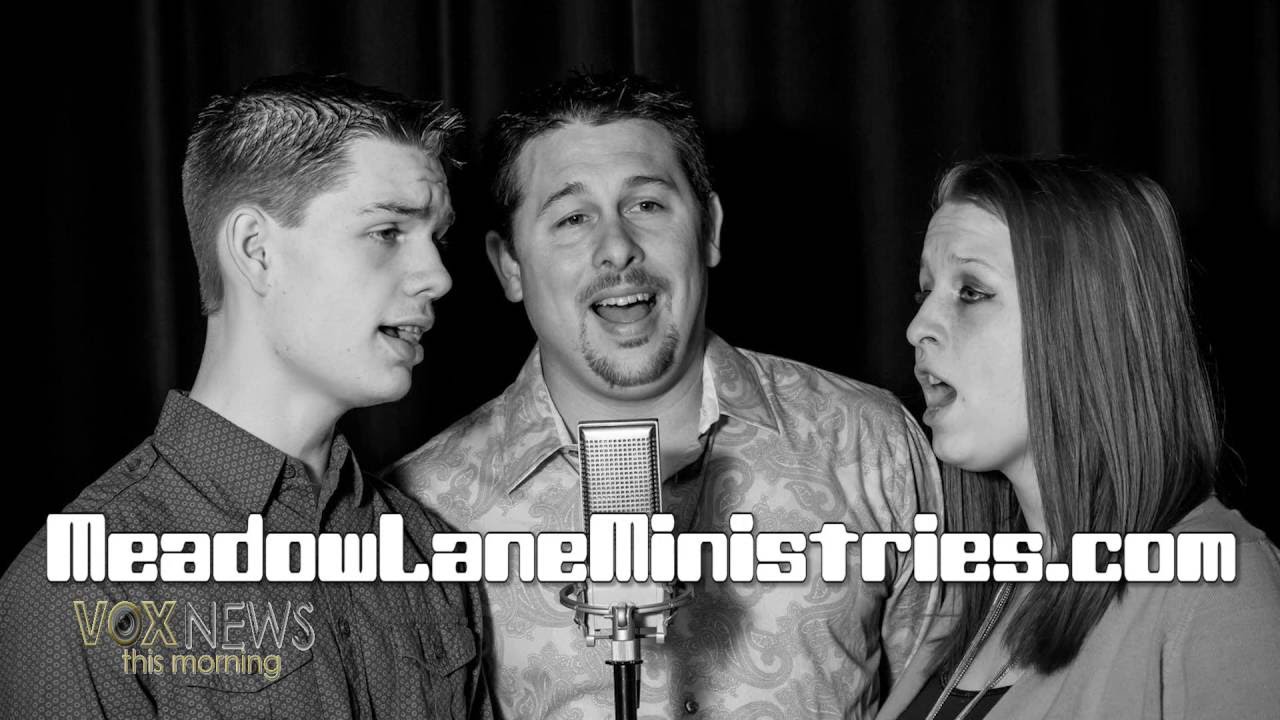 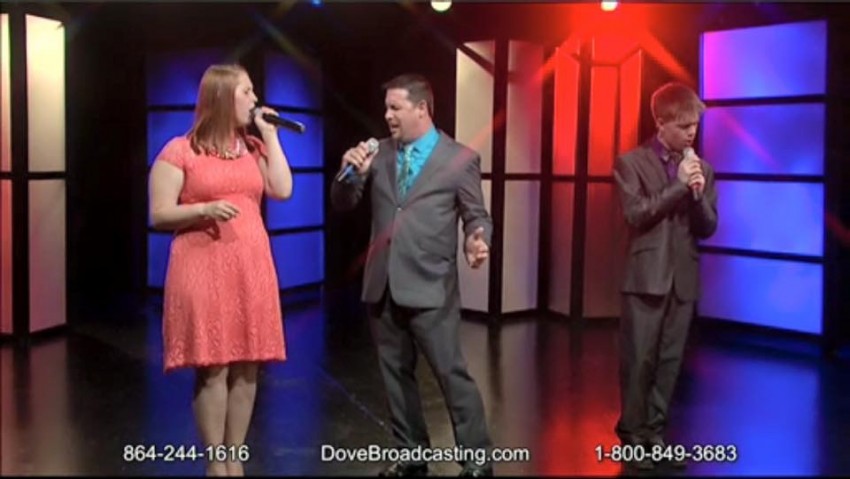 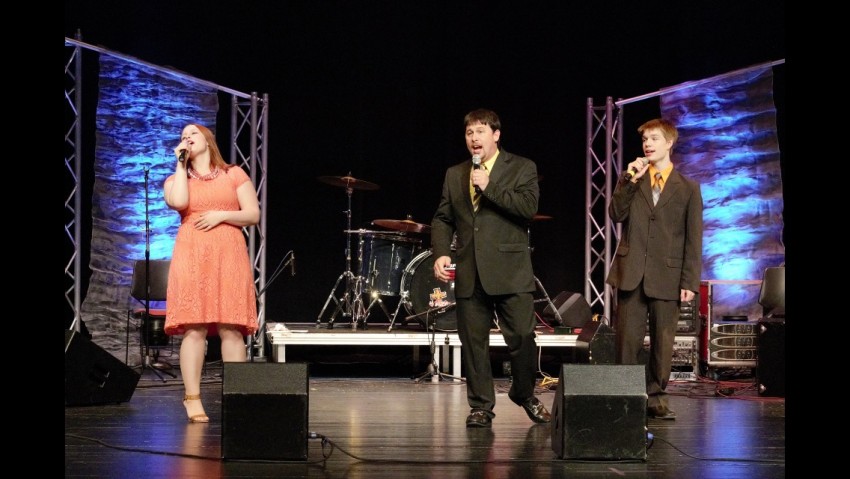 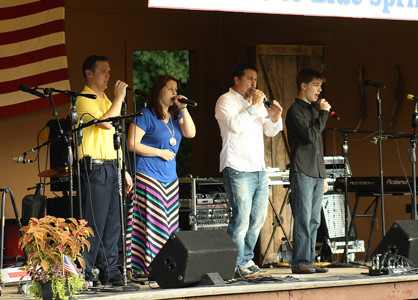 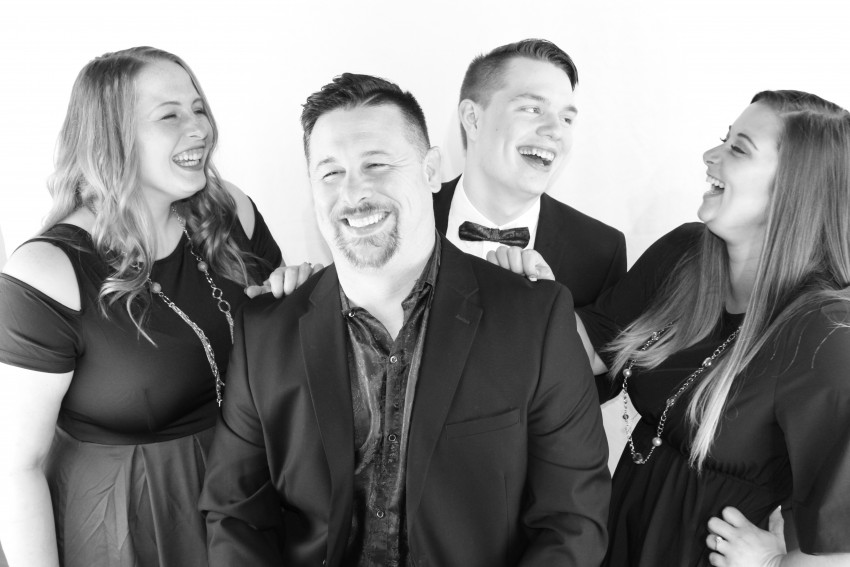 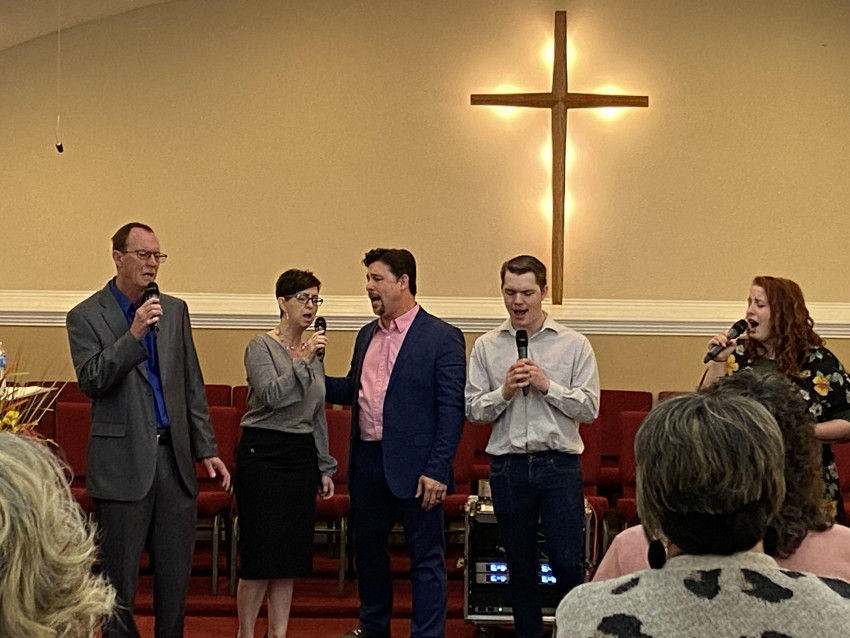 Meadow Lane is a fresh new Southern Gospel trio consisting of Jeremy Epperson, his son Bryson and his daughter Anais. Their tight family harmony will capture your heart as they sing heartfelt and uplifting songs.

I’ve been a fan of Jeremy’s vocal for years. When I heard he was forming a group with his children I knew right then they would be good. I got to hear them in person at Landmark Baptist Church in 2017 and they are solid. I purchased their latest project and I was really blessed by what I heard. Their harmonies were tight, they were professional and I felt something. I would expect Meadow Lane to be one the fastest moving groups in Southern Gospel . I’m excited about what Jeremy and his children will bring to this genre of music!

I just wanted to take a minute and tell you all about Meadow Lane. Meadow Lane is a Southern Gospel Singing Group that is ministry minded and focused on winning souls for Christ! You will not be disappointed in having this wonderful family group at your event!

I wholeheartedly recommend this family group !

I have known Jeremy and Amanda and the family for a very long time ! I pastored for 23 years and I know what fake looks like and I know what entertainers look like.. Meadow Lane is neither !! They come to minister and serve.. you will never see nothing but humility and professionalism out of them... I don’t hesitate in the least to highly and wholeheartedly recommend them !!! What a blessing !!!

Meadow lane has performed at Maple Street Baptist several times and each time I believe they get even better, especially when Jeremy's dad Lynn gets up to sing with them. If you get a chance go out and see them. You won't be sorry!

verry good THEY are a bĺessing

Meadow Lane is a family group that sings southern gospel music. It is so wonder to see young people singing for God. If you haven't heard this group you really should. This is a family that truly loves who they are singing about.

I could talk about the old days, Anais just a little girl with a beautiful voice; Bryson a shy little guy; Dad.....well. But this is today, one of the best Southern Gospel groups you will see. If you will allow, the Holy Spirit will certainly use this family to bless your heart. They have had service at our church, Pleasant Plain Baptist in Little River SC (come visit us) several times and we look forward to the future. Most important, they are spreading God's Word and they are careful to give Him the praise.

Meadow Lane, THANK YOU for sharing your hearts in music. Your message reflects the love of JESUS and points everyone toward GOD! Your sound coupled with your heart is the reason for your sold out crowds! Keep up the great work!!

Thank you Johnathan. We love you and your heart for God as well.

I recently had the opportunity to see Meadow Lane in person at a local church. I had heard their music and an interview on WPET and was excited to hear that they were going to be in town. I have followed the Epperson family as the Singing Echoes for 20+ years and was shocked, but excited to hear that Jeremy had stepped down from The Singing Echoes to form his own trio with his family. Knowing the type of background Jeremy came from I was very excited to see how that spirit and enthusiasm would translate into his own ministry. When I arrived at the church I was happy to see him and to discover that he is still the same down to earth godly man he has always been. Then when I met his son and daughter, I knew exactly why he started a new ministry. From the moment the service started until its conclusion I was in awe. Not in awe of Jeremy, or Anais, or Bryson, but in awe of our Savior and his love for us. That speaks the greatest volume about this group to me. I was ministered to. I heard what Jesus did for me. I was uplifted in a way that only the Holy Spirit can do. This group is as talented as any I have ever seen and could be singing anywhere they want in any kind of music they want, but they choose to sing for Jesus with an anointing and a calling. I enjoyed every minute. If you get the chance to go see them, don't hesitate. You'll be glad you made the trip.

Meadowlane Trio not only is a talented group and family but they are truly anointed!! They sung at my home church last October and this past June for me at Rafael's in Ooltewah and let me say if you want not only talented and anointed singing look no further.

We enjoyed each of those events and look forward to others in the future. Thank you Casey for the great review.

Meadow Lane will present the Gospel with tight family harmony and they will be sensitive to the Holy Spirit. Their down to earth personalities will make you feel that you have known them all of your life.

Meadow Lane is a Southern Gospel Trio consisting of three members of the Epperson family: Jeremy, his daughter Anaïs, and his son Bryson. Jeremy traveled and performed with his family group, the Singing Echoes, for over 20 years, singing every part from bass to tenor, playing multiple instruments, and writing a number of favorite Singing Echoes songs. In February of 2014, Jeremy stepped down from his family group following the leadership of the Holy Spirit which was calling him into a different direction musically and in his ministry. Shortly after leaving the Singing Echoes, he and his two children formed Meadow Lane. The trio has already toured several states, performed at many prestigious venues such as: The Gospel Music Fanfare in Somerset, KY, Six Flags Over Georgia in Atlanta, GA, Hard Rock Cafe in Atlanta, GA, The Singing Echoes Blue Springs Valley Gospel Singing in Cleveland, TN, WGGS Channel 16 Greenville, SC among others.

Meadow Lane has been blessed to have seen several souls saved through their new ministry. Their tight family harmony will delight your ears while the Holy Spirit tenderly works its way into your heart. Their debut single "Praise The Lord" from the Album "Lift Your Voice" debuted in the Christian Voice chart at #62 and in the SGN Scoops chart at #72. The song rose to #26 on The SGN Scoops chart. At the moment of this publication the song is still rising on the Christian Voice chart, but currently in the #55 position.

A typical service or concert with Meadow Lane is much like what you would expect from the Epperson family. The Holy Spirit is invited to lead each and every step of the way. Sometimes what Jeremy might have planned to sing is completely changed by the leadership of the Holy Spirit. Jeremy says " We don't always get to sing what we want to. Sometimes we are led to sing something we haven't sung in months or ever at all for that matter. One thing's for sure; when the spirit is leading you better follow or get out of the way because we are nothing without His leadership"

Meadow Lane still believes that the only way to Heaven is to be saved by grace through faith, putting your trust in Jesus who was God's own son sent from Heaven, born of a virgin, and whose innocent blood was shed on Calvary's cross to save a dying, sin cursed world. They believe that He arose after three days, over death victorious, and is seated at the right hand of the father interceding for you and for me. Jeremy says it best when he says, "We're just nobody's telling everybody about somebody who can save anybody".

We are completely self contained. Our equipment is updated and is compact yet large enough to easily provide sound reinforcement for a large venue. We have a very small stage footprint.

The Singing Echoes, The Perrys, The Hinsons, Karen Peck and New River, The Steeles, The Cookes, The Happy Goodman Family, The Crabb Family, Most importantly: Our Lord and Savour Jesus Christ.

For venues larger than 1500 seating capacity, we will need front of house sound reinforcement provided. 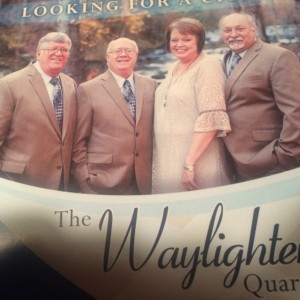 Old style Southern Gospel singing. The Waylighters have been around since 1979,founded by Charlie Adam of Lidscomb Ala.We love the Lord,we go when He opens a door,… 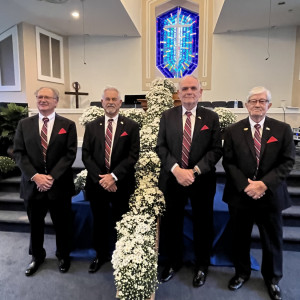 Meggan W. said “We had the pleasure of having the Glory Quartet at our Assisted Living and Memory Care community. They were so professional, kind, and talented! We can’t…” 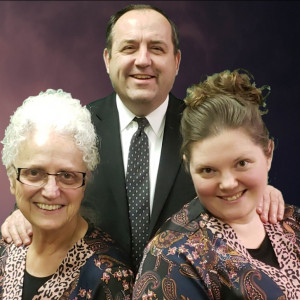 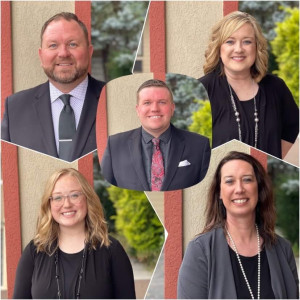 We are a Southern Gospel Family group that sings, shares the testimony of the miraculous story of our autistic son, Aaron, and evangelize. We travel full time and…