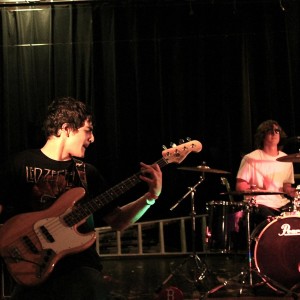 Rock/Alternative band from Andover, MA. Check us out on Facebook, we're always looking for gigs!

Be the first to review Man Hands

Man Hands is a rock band that was cofounded by Ben Harris and Jack Shea in September 2011, beginning as a year-long independent school project—or rather, an excuse for the two to play music in Jack’s basement during last block class every other day—for which they planned on writing music together and releasing an album at the end of the year. Beginning with some crudely recorded demos recorded in Jack’s basement to a tape recorder, they started jamming songs with working titles such as “Raspberry Jam” (which would later become “Yesterday”) and “Jungle Cat.”
It wasn’t long before this project took control of itself and became Man Hands when Jack and Ben recruited Evan Bedrosian on bass in November 2011. Together, the trio rehearsed for three months, perfecting a short set of original songs. After playing a couple small, private shows they decided that their live sound would benefit from having another guitarist onstage to increase both the volume and energy of the music. Jack immediately asked classmate Mike Horsman to fill the position, and after a brief hesitation he accepted. With the addition of Mike filling in the gaps left by the rest of the band, Man Hands became complete, upping both their confidence and togetherness as a band. Only a week after recruiting Mike, the band made their debut as a four piece at The All Asia Bar in Cambridge, MA, receiving much positive feedback for their improved sound and original material. Since then, Man Hands has booked several gigs at other venues including The Sad Caf, McGann’s Irish Pub, The Middle East Upstairs, Paul’s Pub, and many others. They are currently in the middle of recording their first EP at Alpha Omega Studios in North Reading, MA and are hoping for a release in early May. The recording process is moving along beautifully and the band can’t wait to share their music with the world.
The current lineup is as follows:
Jack Shea- guitar, vocals
Ben Harris- drums, vocals
Evan Bedrosian- Bass
Mike Horsman- Guitar

We have about 40 minutes of original material, and we've covered artists such as The White Stripes, Dinosaur Jr, and Smashing Pumpkins.