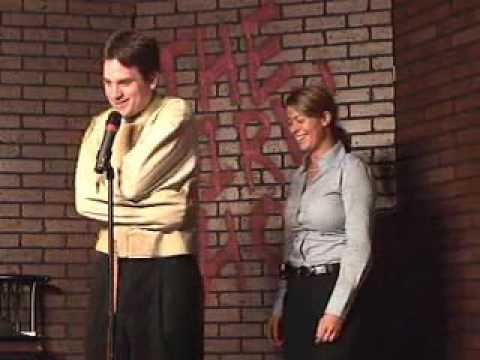 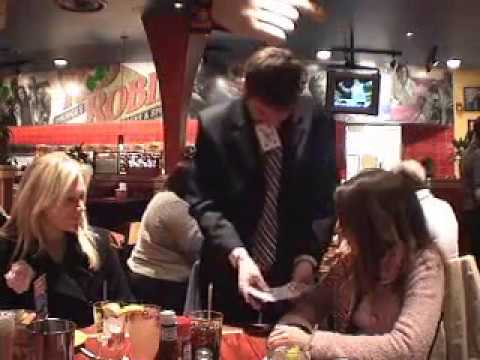 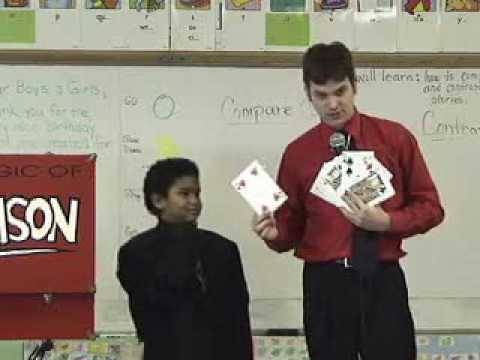 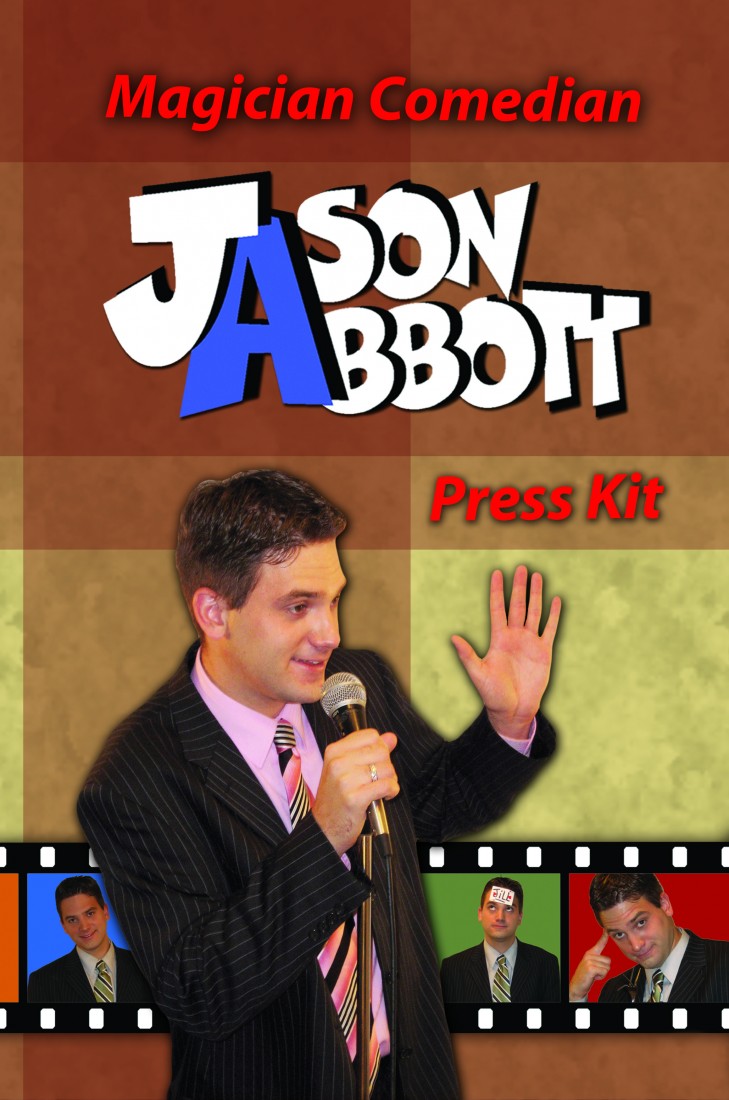 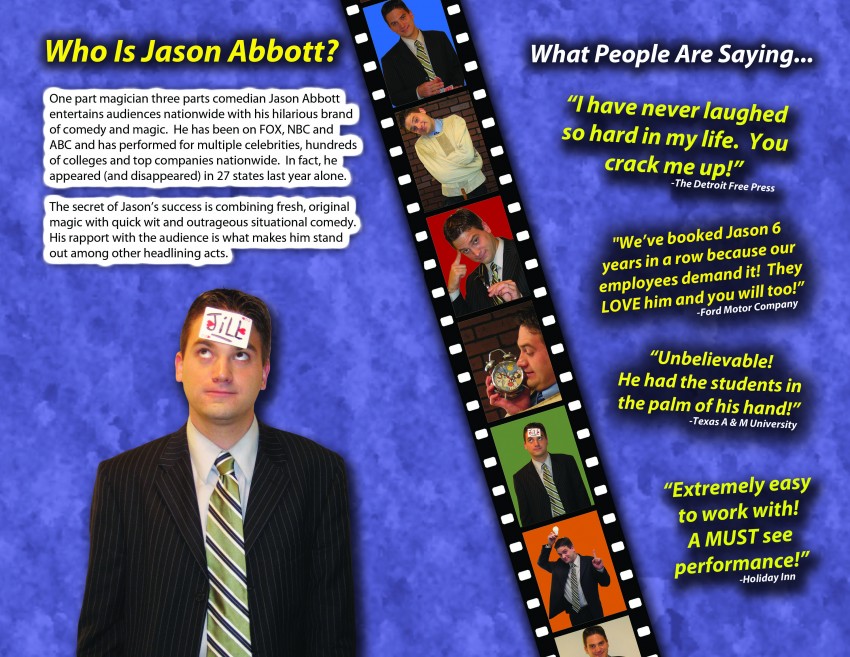 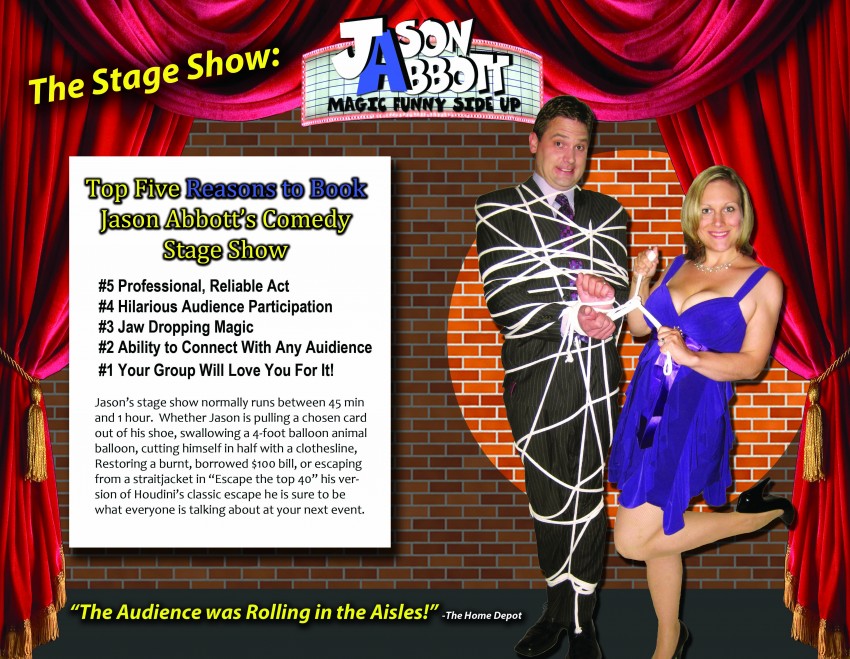 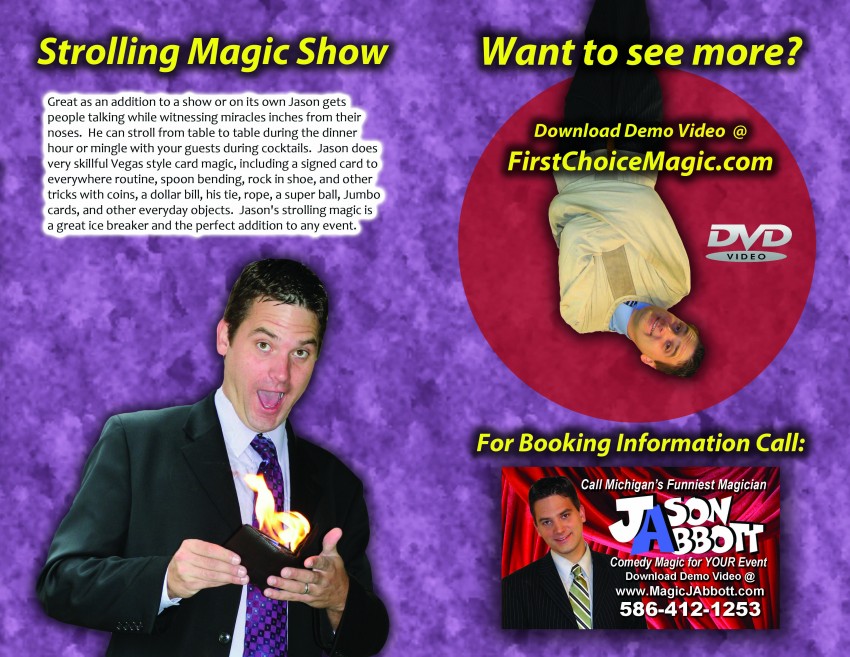 One part magician three parts comedian Jason Abbott entertains audiences nationwide with his hilarious brand of comedy and magic. He has been on FOX, NBC and ABC and has performed for multiple celebrities, hundreds of colleges and top companies nationwide. In fact, he appeared (and disappeared) in 27 states last year alone. The secret of Jason’s success is combining fresh, original magic with quick wit and outrageous situational comedy. His rapport with the audience is what makes him stand out among other headlining acts.

I hired Jason for our company holiday party. We had 130 employees there and there wasn't a single person that wasn't laughing throughout his show. His jokes were hilarious, his tricks were unbelievable. They left us all wondering how he did it! I would highly recommend Jason for your event!

Jason did a fantastic job at our State Convention. His magic and humor were second to none. During his show he had the entire group laughing and jaws dropping with "how did he do that?" expressions on everyone's faces. I would highly recommend Jason for anyone looking to have great entertainment for a corporate event. You will not be disappointed!

Humor & Magic beyond our wildest expectations!!

Our holiday party, thanks to Jason Abbott, was one of the most successful, enjoyable and memorable events our company has ever had. His interaction with members of our company, hilarious, his magic, mind blowing, and his professionalism, beyond reproach. He made you feel has if you were at a Las Vegas magic show. Being the person in charge of this years holiday event I was so pleased that when I came into work this morning (Monday, January 18, 2016) I heard people talking about what a great event. His magic still has people in awe. Because of his dollar rate being so very reasonable (actually he isn't charging enough, but I won't tell him) and his ability to suck people into his magical world, making us all deaf to any other sounds going on around us, I would hire him again in a heart beat. Thank you Jason for making me a hero.

Fun and interactive! Everyone loved it!

I am so happy to have chosen Jason as the magician for my nephew's communion party! I don't know who was laughing harder, the kids or the adults! Funny and very entertaining! Easy to work with, great communication and accommodating. Thank you for a great experience, the kids (and adults) are still talking about the performance.

Jason was incredible....funny...and really great with our customers.....I would recommend him for any event

We had a group of 18 older teenagers. Jason was very entertaining and fun.

Jason was awesome!!! We had Jason do strolling close up magic for a party followed by a 30 min show and it was so entertaining and fun. The magic combined with comedy made for a perfect night.

Perfect for kids and adults

did a great job

Did a great job for a difficult age group (preschool)

Easy to book, made it work despite the challenges of Zoom, really impressive magic!

JASON IS THE MAN

Jason is the man. If you don't book him for your next party you are making a BIG mistake

Jason came and performed for my kids birthday party, two girls turning 5 and 8. He did an awesome job, had the kids laughing for an entire hour, stayed after and did balloons for everyone and also mixed in some humor for the adults that had them laughing. A great mix of comedy, magic and fun. Can't thank him enough for making it a special day for our kids and Family. Outstanding performance.

I was very skeptical of having a comedy/ magic show for a Houseparty full of young adults but Jason surprised us all. Everyone was laughing and was engaged throughout the show. Thanks for making my party a hit!

Jason Abbott did a great job! This event wrapped up our week of Bible Camp that was virtual this year. We had Jason do a show via Zoom and it was really well received-kids and their families enjoyed the show! Everyone had a "front row" seat, which is unique and fun.

We needed an online show to host a quarantine-friendly party, and Jason Abbott did an amazing job! He modified his show to work with our platform and delivered excellent entertainment!

Jason had the entire group laughing for the entire show. Even the people who were a little unsure, he had in complete laughter by the end. Such an easy person to get along with and was more than accommodating to our always changing schedule.

If you're looking for some fun, and some seriously cool magic, this is the person you should bring to your event!

Thank you Jason from all of us. We had a blast.

Everyone loved his show

We had Jason entertain us for our annual Kid's Christmas party, it was awesome.

Jason is a professional

You really never know what you are going to get when you watch the preview videos of the performers. Jason's preview video is good but he is even better in live mode. Jason was the perfect entertainment for our multi-generational crowd! He is truly gifted with the skills and personality to perform. Jason performed strolling magic, with humor, a stage show and even played the roll of DJ. Every comment about the evening was positive. We will be challenged to top our entertainment next year. Thank you Jason for the perfect show!

So glad that we arranged to have Jason at our Christmas Party!! I would highly recommend him!

Jason put on a great show. Was skeptical at first on how the audience would react to the show, but Jason could read the crowd well, was engaging with them - everyone from 5 year olds to 70 year olds. The entire time, he had the crowd laughing and engaged. It was also very easy to work with him to set up the logistics. I highly recommend his show.

During our grand reopening Jason performed roaming magic from table to table. He was amazing! People of all ages from the kids to their grandparents were all enjoying his performance. I would HIGHLY recommend him for any event. I saw him doing an event just last month and knew I needed him to be at mine. I was impressed both times. If there's a time I need another magician he would be the first on my list.

I will definitely be referring Jason to plenty of my friends for events. He was a huge hit for my grand opening and everyone loved him. I think the adults had more fun than the kids did because he was so great. The kids had a fantastic too though for sure!! Lots of laughs at my event and I appreciate it Jason very much :)

Excellent job! Everyone loved him.

Jason is your Man!

Jason was Magical! His humor was subtle / dry and had the crowd rolling. Will def'ly use him again!

Jason was great! His personality and stage presence was great. I saw numerous dumbfounded expressions in the audience...”wow...how did he do that?” He was punctual and his performance filled the agreed upon time frame!

Jason is a wonderful performer. He did a show for our company Christmas party, and the room was full of laughter. His jokes were great and the magic was very impressive. We would highly recommend him for any occasion.

Jason did an awesome job and everyone was talking about how great of a party it was!

Jason was great and truly entertaining!

Jason showed up on time and did table top / strolling tricks for our groups as we had a social hour before dinner. He provided background music for the meal and then did his show. Entertaining for all - the group loved it - laughed at it and participated in it all.
We'd recommend him for a small group (50 people) to a larger audience. Very personable and easy to work with also!

Jason was the entertainment and talk of the night for our work holiday party. Jason got the crowd involved and laughter filled the room. Many guests came up to me after stating that I did a great job hiring Jason for our event. My boss said we are hiring him again next year. I highly recommend Jason, besides being funny and great at what he does he is very accommodating and easy going.

I received several good reviews/comments from our employees about Jason. He was funny, respectful, and stunned everyone with his magic. We would hire him again for an event in the future. He also performed a children's magic show, which was wonderful.

We hired him for our staff Christmas Party and everyone LOVED it! The audience participation was just wonderful - highly recommend him. The best entertainment we have had at our staff party!!! Great magician & comedian as well!