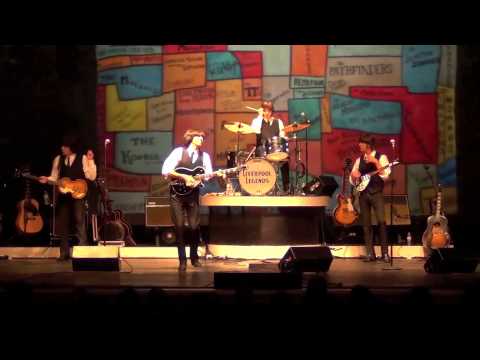 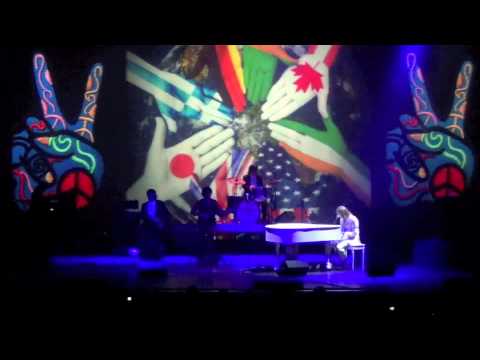 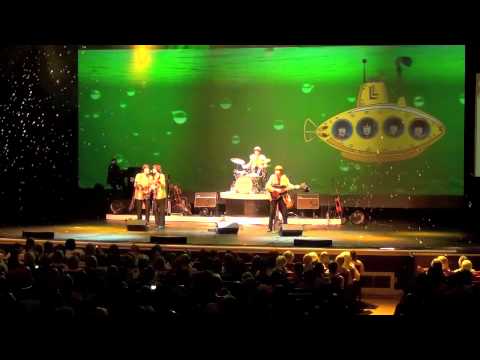 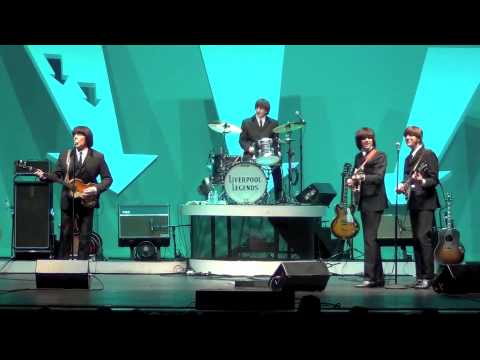 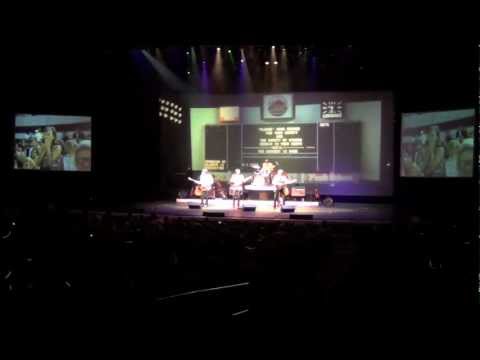 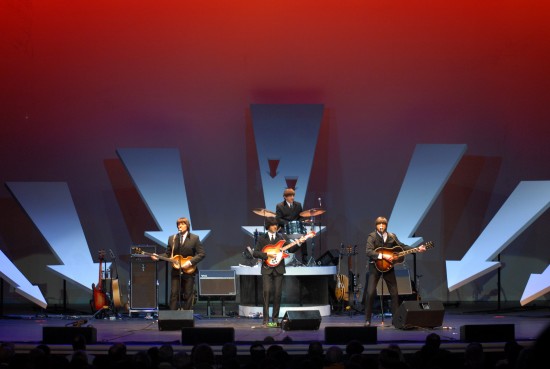 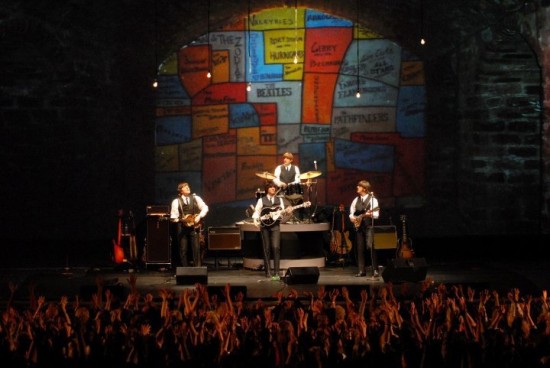 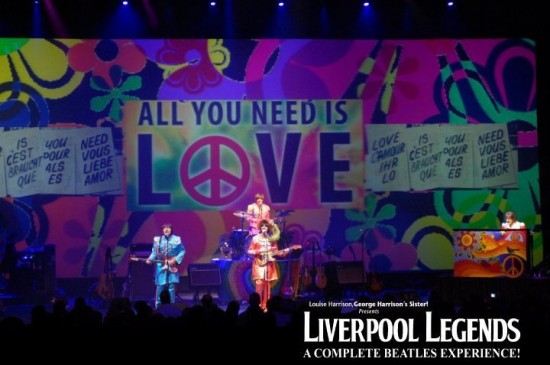 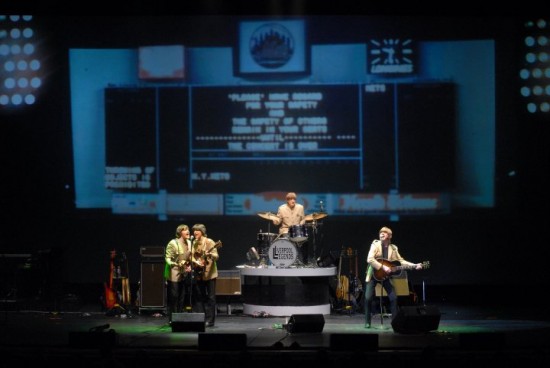 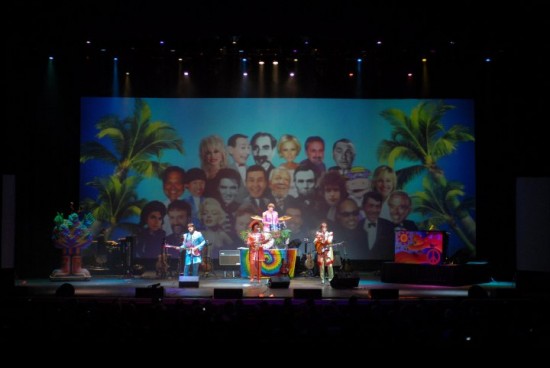 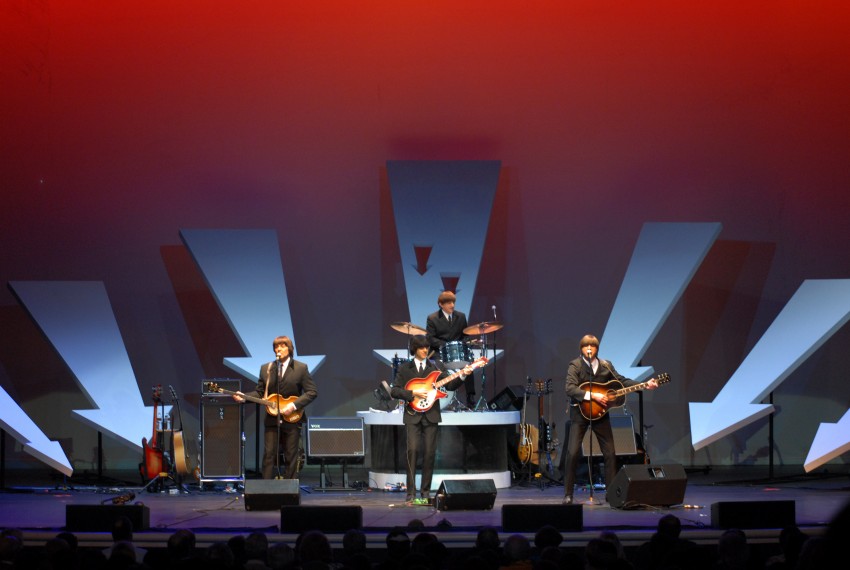 Liverpool Legends "The Complete Beatles Experience!" is a Beatles Tribute show based in Branson Missouri. The members were all hand picked by George Harrison's sister, Louise who is also available to tour with them on selected dates.

Headlining their own production in Branson since 2006, Liverpool Legends have been voted Best New Show, Best Band and Best Show in Branson.

Louise’s involvement with LIVERPOOL LEGENDS makes them the only Beatles tribute in the world with a close, direct biological link to the original Fab Four! “Liverpool Legends present the very best portrayal of The Beatles since the only four guys to play The Beatles were John, Paul, George and Ringo!” says Harrison.

I'm a big Beatles fan and have seen the best. LL is the most fun I've had at a concert. They are not only spot-on, but interact with the audience as I imagined the Beatles would - very cheeky, having a good time on stage. Very well done and a rockin' good time.

Louise Harrison is Right On!

You cannot get any closer to the real Beatles! Amazing! These lads were handpicked by George's sister,Louise! Transport yourself back in time for a show that will guarantee to make you smile! Fun for all ages!!!

I saw the Liverpool Legends at the Beatles Festival in Walnut Ridge, AR. There were fabulous. Although I am not the biggest Beatles fan...my friend is and she was astonished by their look and sound. It was a great time and a good show!

Unbelievable....Thought I was listening to the "Beatles"

This is the best show ever! I recommend everyone who grew up with the "Beatles" to see this show. Price is reasonable and I would go back again to see them. Amazing how much they look and sound like the real musicians.

LIVERPOOL LEGENDS OPEN THEIR 2ND SEASON IN BRANSON ON APRIL 3RD 2007 AND PERFORM THRU DEC 15th!!!

Liverpool Legends “The Complete Beatles Experience!” are four incredibly talented musicians and actors hand-picked by Louise Harrison- sister of the late George Harrison of the The Beatles.
Louise’s involvement in Liverpool Legends makes them the ONLY Beatles Tribute Band with a direct family link to the original Fab Four. “Each member of the group is so close to the originals that I often feel like I’m transported back in time with the lads. These are exactly the kind of fun loving quality musicians that my brother George would have loved to hang out with,” says Harrison.
Liverpool Legends along with Louise Harrison were nominated for a Grammy Award for their work on “Fab Fan Memories” – a Beatles Bond.
2015 has been a very exciting year for the group as they toured The U.S. and internationally, culminating with a sold out performance for over 16,000 people at Arena Ciudad De Mexico. This September they travel to Ecuador for three spectacular performances in Guayaquil and Quito.
Liverpool Legends headlined at the prestigious Rose Bowl in Pasadena, CA, in front of 68,000 people (an audience larger than The Beatles performed for at Shea Stadium!).
Liverpool Legends also received national attention when they re-created The Beatles famed 1966 concert at Busch Stadium in St. Louis. Cardinals manager, Tony Larussa was so taken with the band that he’s had Liverpool Legends flown in for several of his own private events with top stars from around the world.
On March 5th, 2016 Liverpool Legends will be performing at the prestigious Carnegie Hall in New York City where The Beatles performed in 1964 right after the Ed Sullivan Show.
Celebrating their 10th season headlining their own show in Branson Missouri, Liverpool Legends have been awarded Best New Show, Best Band, Best Show, and received the prestigious Visitors’ Choice Award for Entertainer of The Year for two consecutive years.
Recently Liverpool Legends were chosen over every other Beatle Tribute band in the world by top television and film producer Jerry Bruckheimer (CSI, Pirates of The Caribbean, National Treasure) to portray the band that changed the course of music and the world forever.
Members of Liverpool Legends have toured the world, playing in historic venues such as The Cavern Club in Liverpool and recorded at the famed Abbey Road Studios in London. They have performed with Denny Laine (co-founder of Wings with Paul McCartney), Pete Best (the original Beatles drummer) and the Boston Pops. Liverpool Legends have appeared on The Travel Channel’s “Beatlemania Britain” and headlined “International Beatles Week” in Liverpool where 100,000 Beatles fans jammed Victoria Street to hear them in concert.
Liverpool Legends perform songs spanning the entire career of The Beatles and on through the solo years. With precise attention to every musical detail, along with costume changes, vintage instruments and special effects, Liverpool Legends will make you feel like you are watching the real thing! Together, these four lads will bring you “The Complete Beatles Experience.”