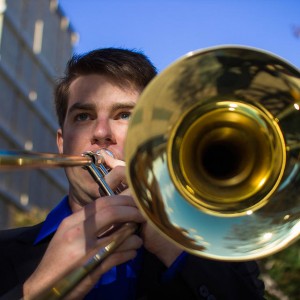 Kurt is available for solo, orchestral, and chamber performances, as well as master classes, and private lessons.
He is accomplished and well versed on tenor trombone, alto trombone, and bass trombone, as well as euphonium/baritone horn/tenor tuba, and bass trumpet.

Be the first to review Kurt Ferguson

As a tenor trombonist, Kurt Ferguson’s career has taken him from coast to coast, performing in venues from concert halls such as Disney Hall, Houston Symphony’s Jones Hall, and Lincoln Center to art museums and children’s hospitals. He has been blessed with a wide variety of opportunities; giving solo recitals, performing in chamber groups, as well as performing in orchestras across the continent. Mr. Ferguson spends part of his summers playing trombone for the Spoleto Festival in Charleston, SC. In addition to his usual orchestral repertoire, he is afforded the chance to perform some newer compositions. Most notably were performances of John Adams’ opera El Nino in 2014, and the premier of a new opera Paradise Interrupted by Huang Ruo in 2015. Other performances have led Mr. Ferguson to share the stage with conductors Gustavo Dudamel, James Conlon, Giancarlo Guerrero, and actor Jack Black.

In addition to his mastery of the tenor trombone, Mr. Ferguson has always enjoyed exploring other instruments. When he joined his first orchestra in 1999, he was playing the cello. While the cello now spends more time in the case than out, the doubler’s spirit lives on. He was a finalist in the International Trombone Associations 2013 Alto Trombone competition, and holds a Performer’s Certificate from the Eastman School of Music for his euphonium playing. Both the alto trombone and the euphonium make regular appearances in recitals, as does the even more obscure bass trumpet.

Mr. Ferguson is also an avid educator and maintains a studio of trombone and euphonium students. He regularly appears as guest faculty for master classes at a number of colleges around the country. He holds degrees from the Eastman School of Music, Rice University’s Shepherd School of Music, and the Colburn School of Music. Some of his teachers have included John Marcellus, Mark Kellogg, Allen Barnhill, and Mark Lawrence. 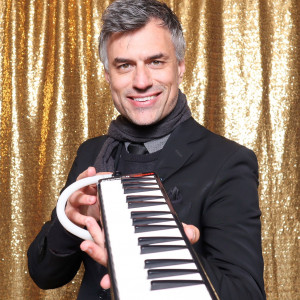 Christopher M. said “We hired these guys to play a Christmas party. Great folks, great performers. We would use them again. Maybe around Mardi Gras!” 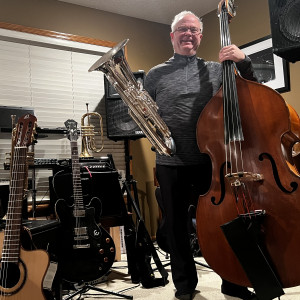 Tavis M. said “Alan was great. He was the glue that held a randomly assembled band together. His bass playing and euphonium playing we’re TOP NOTCH. And he was a pleasure…” 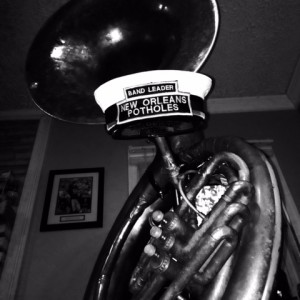 Craig L. said “We went to New Orleans for my brother's bachelor party and the only thing he wanted was a second line parade. I had no idea what I was doing, but came…”

Patricia A. T. said “Joel arrived early and provided our our veterans and their fallen brothers with a warm, caring and respectful tribute for their sacrifices. Our community…”