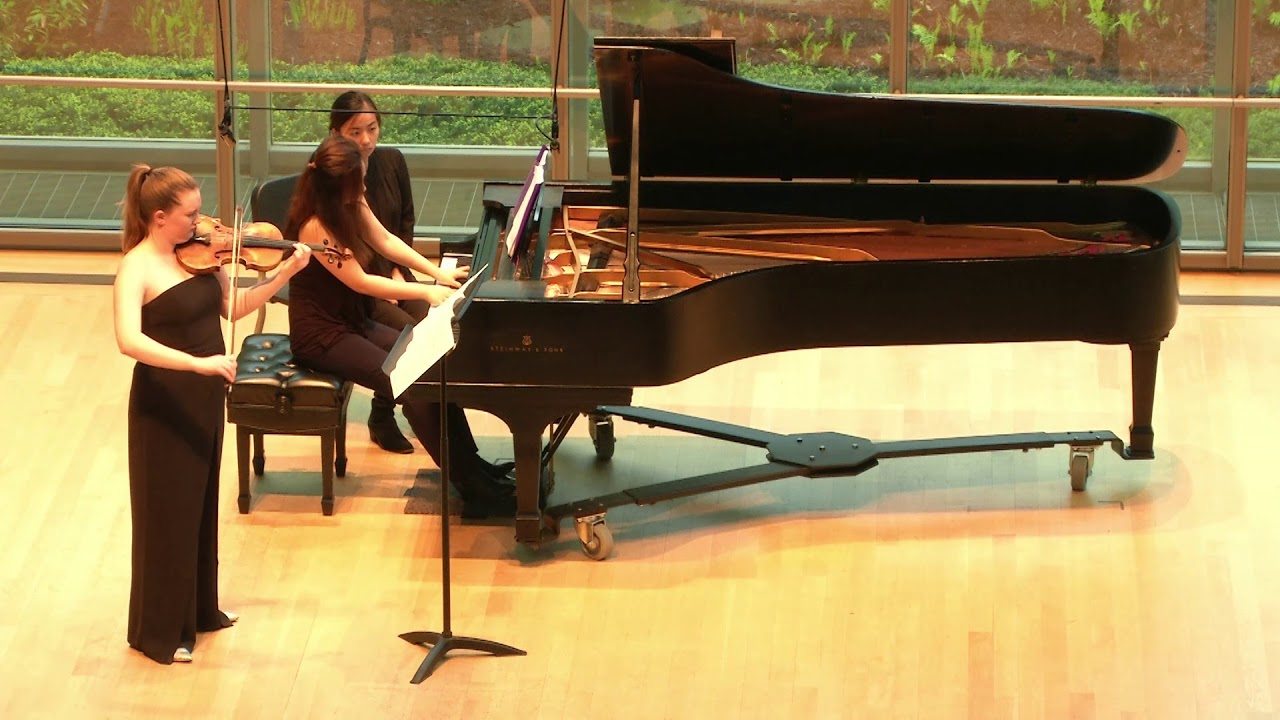 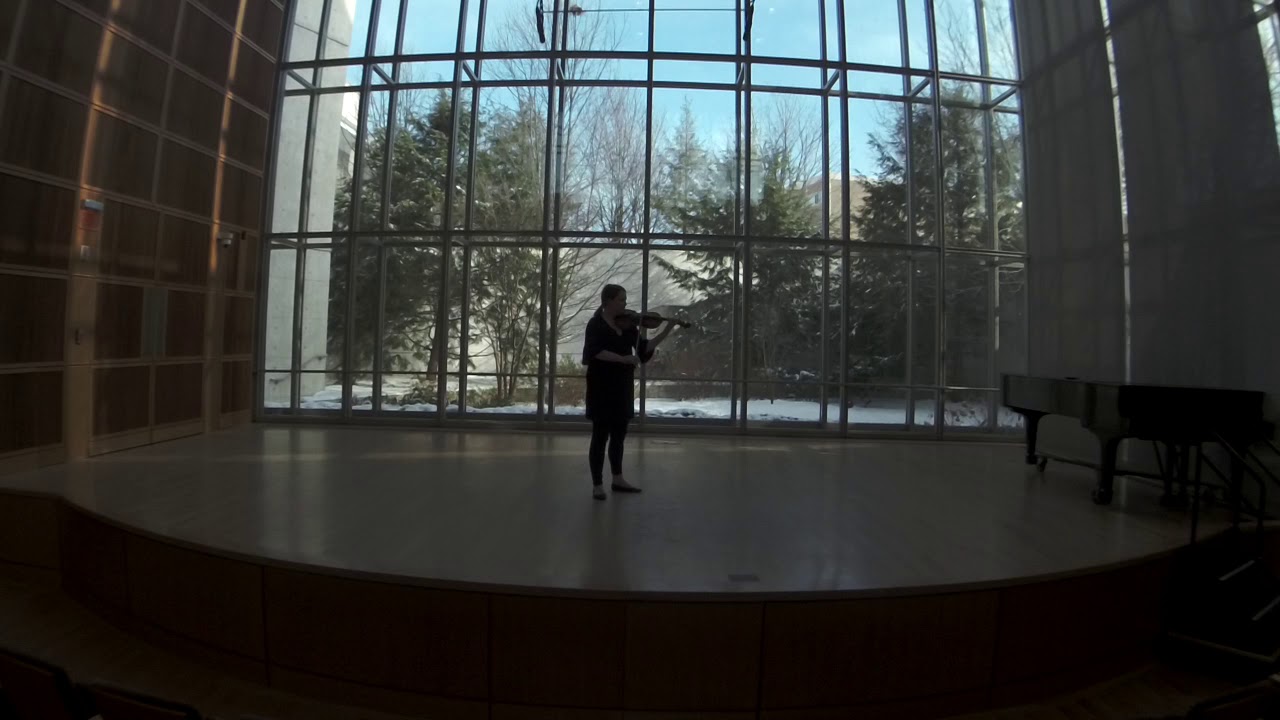 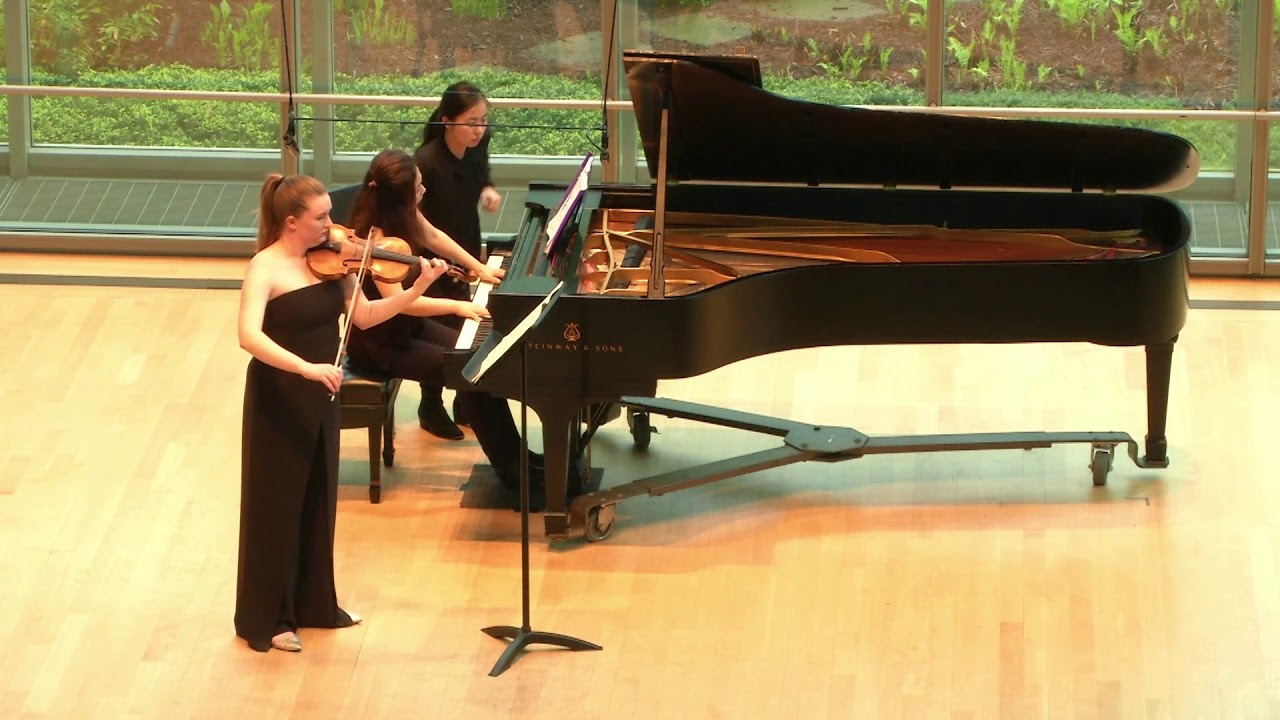 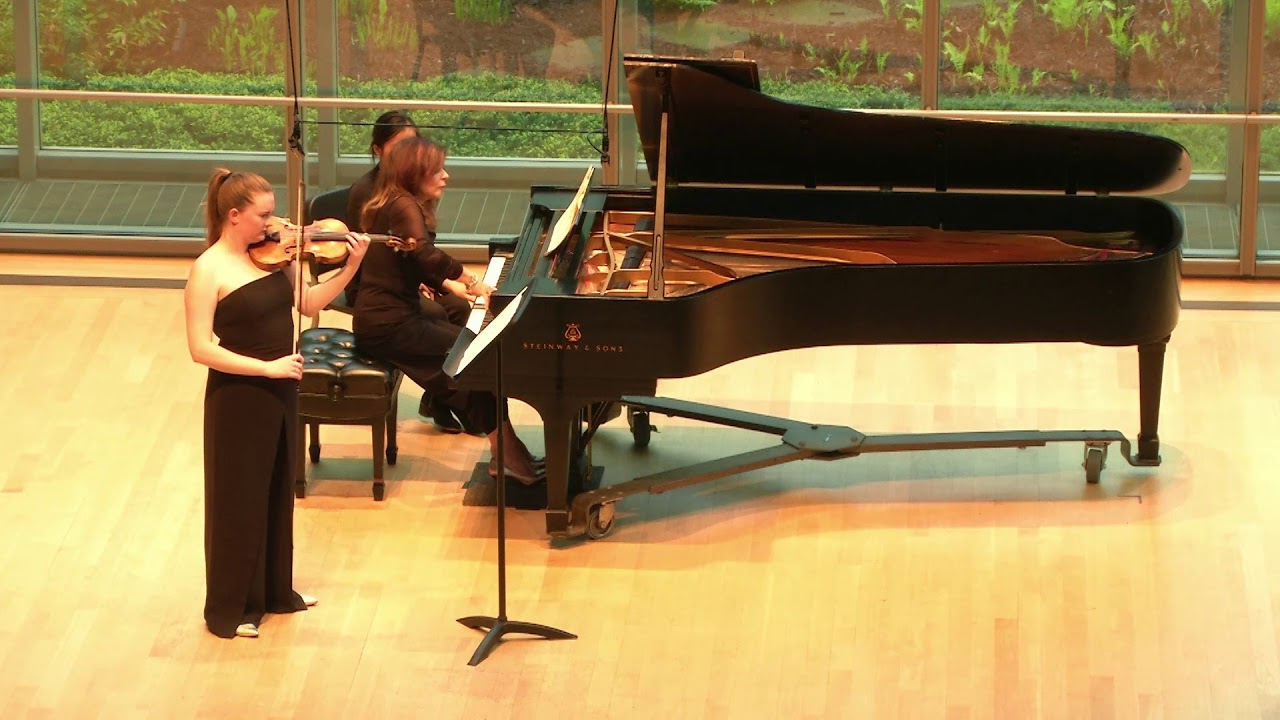 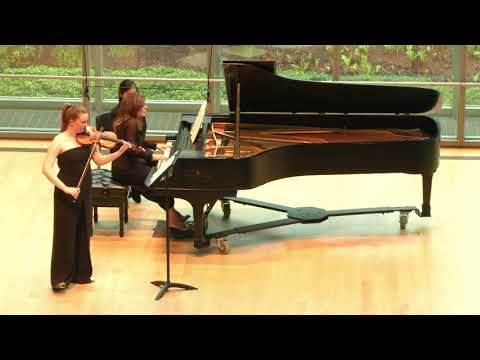 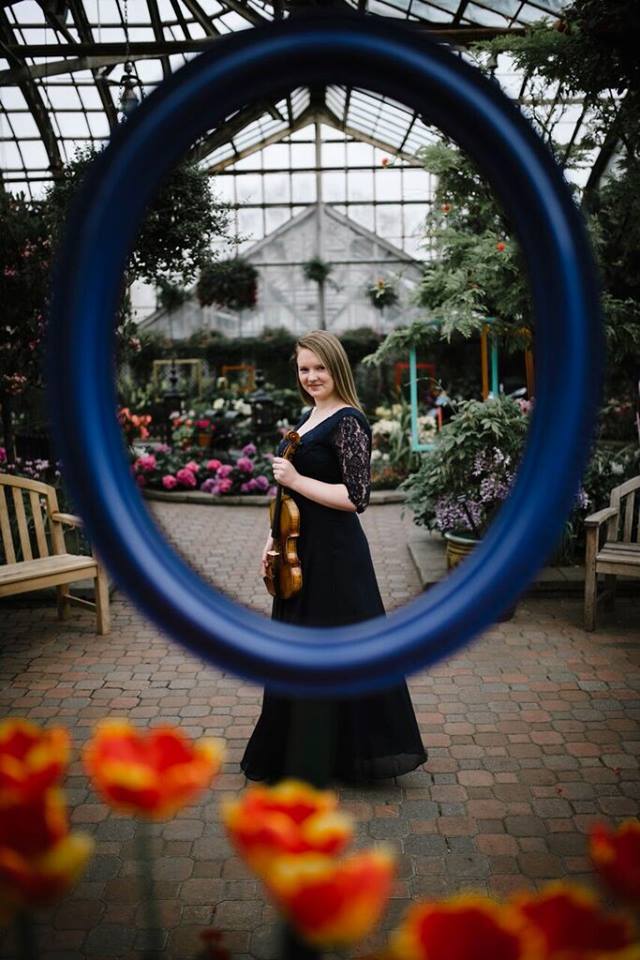 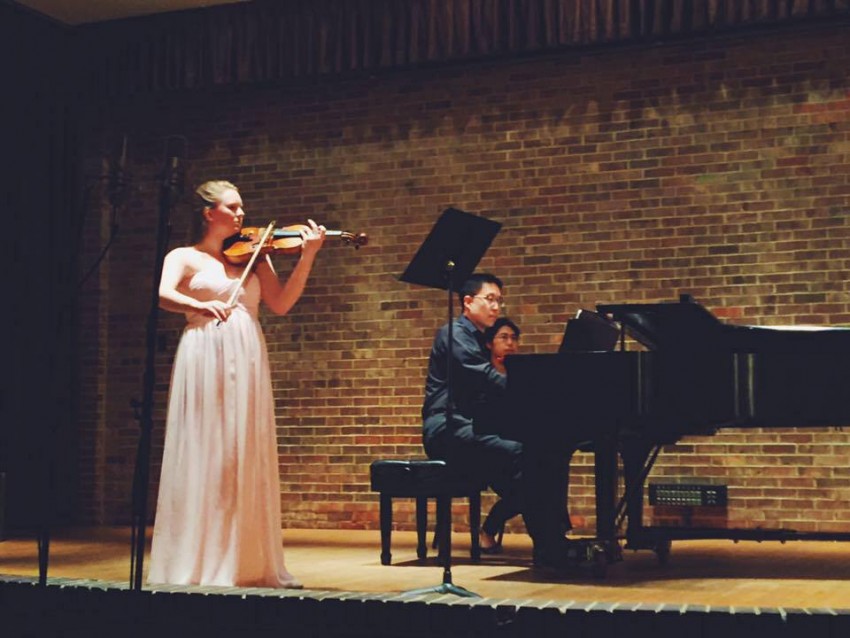 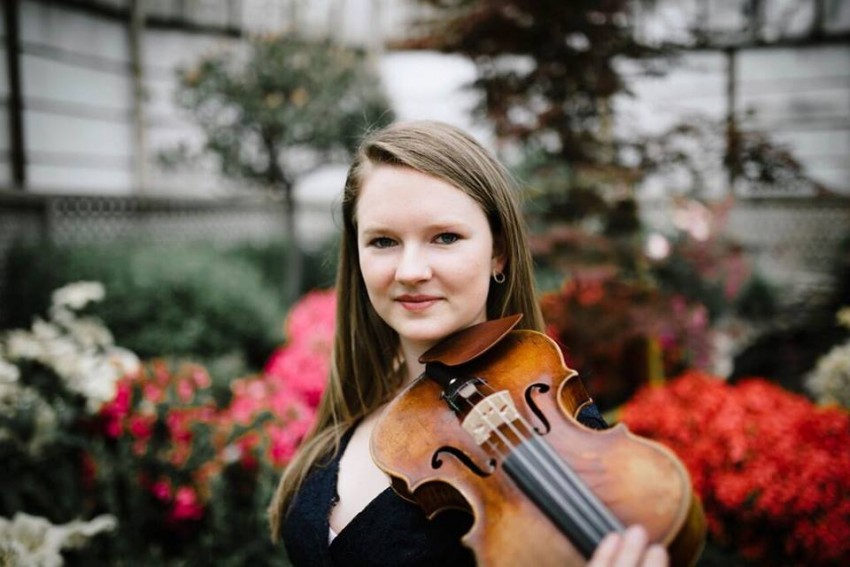 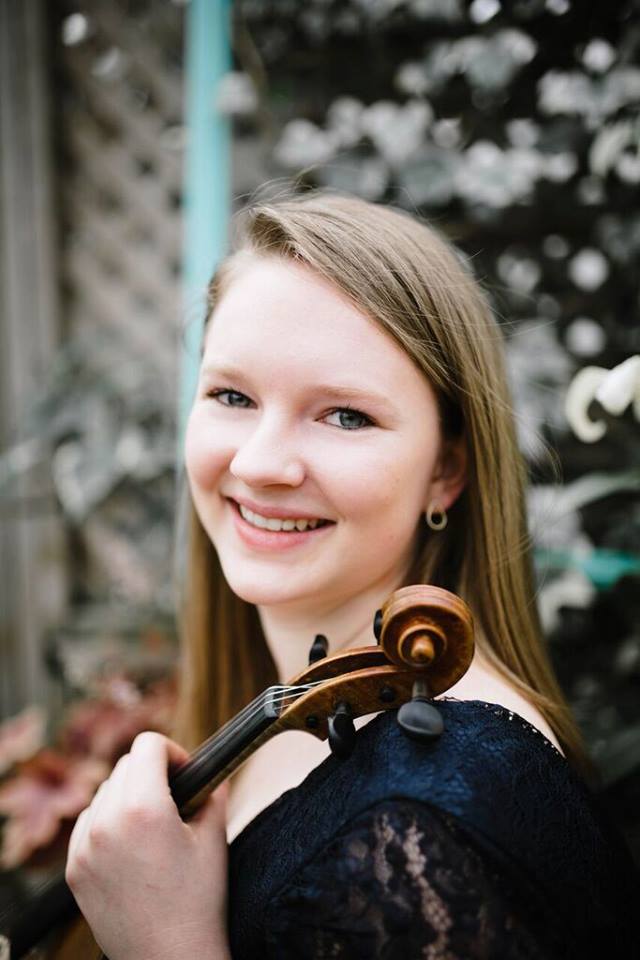 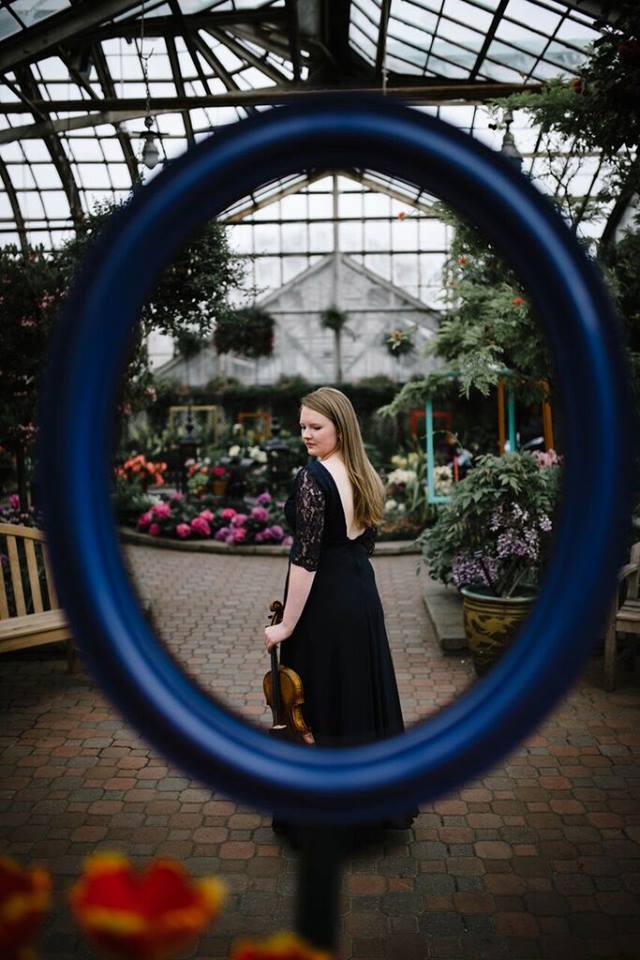 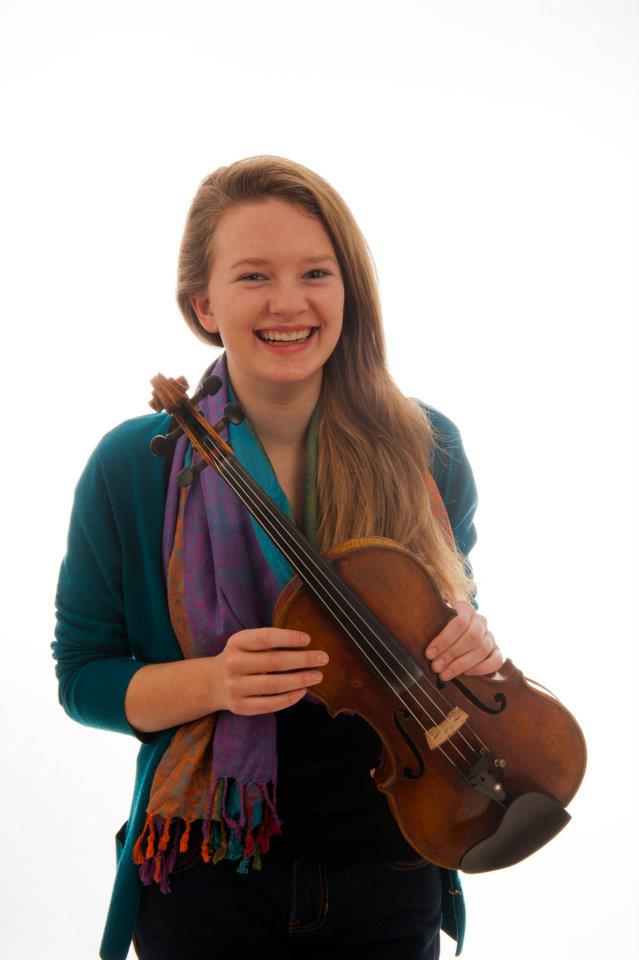 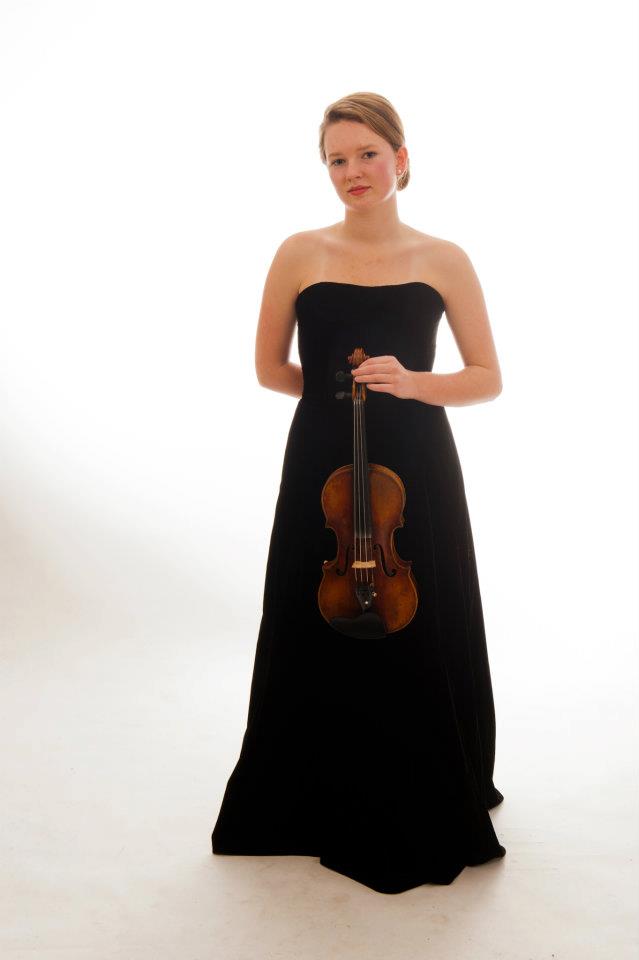 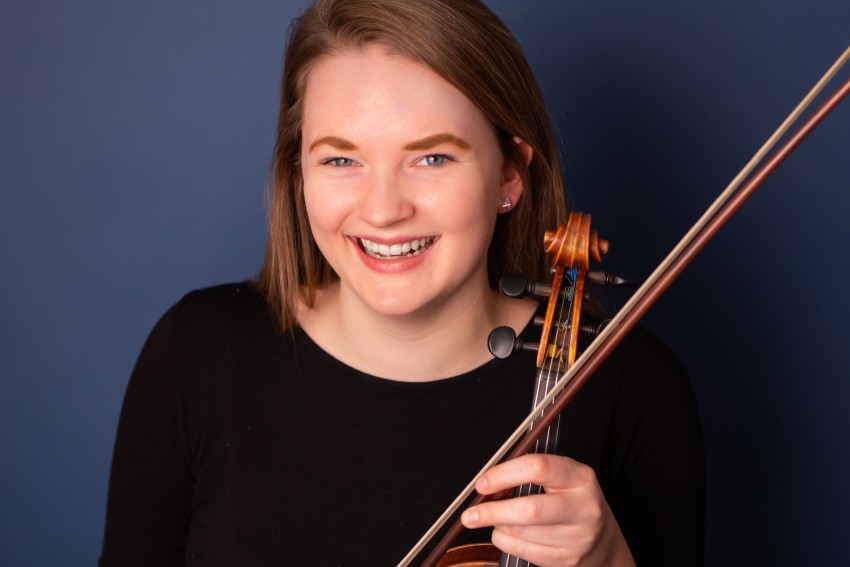 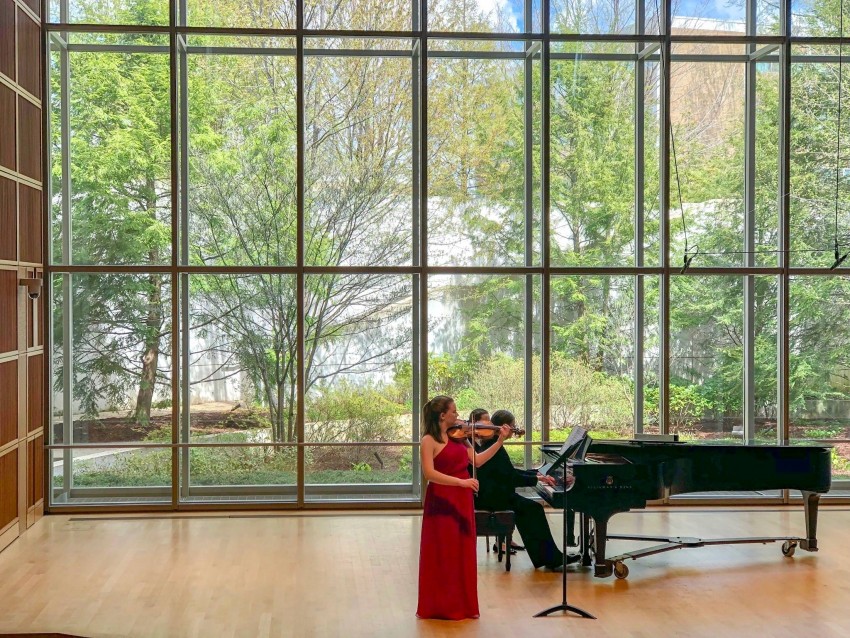 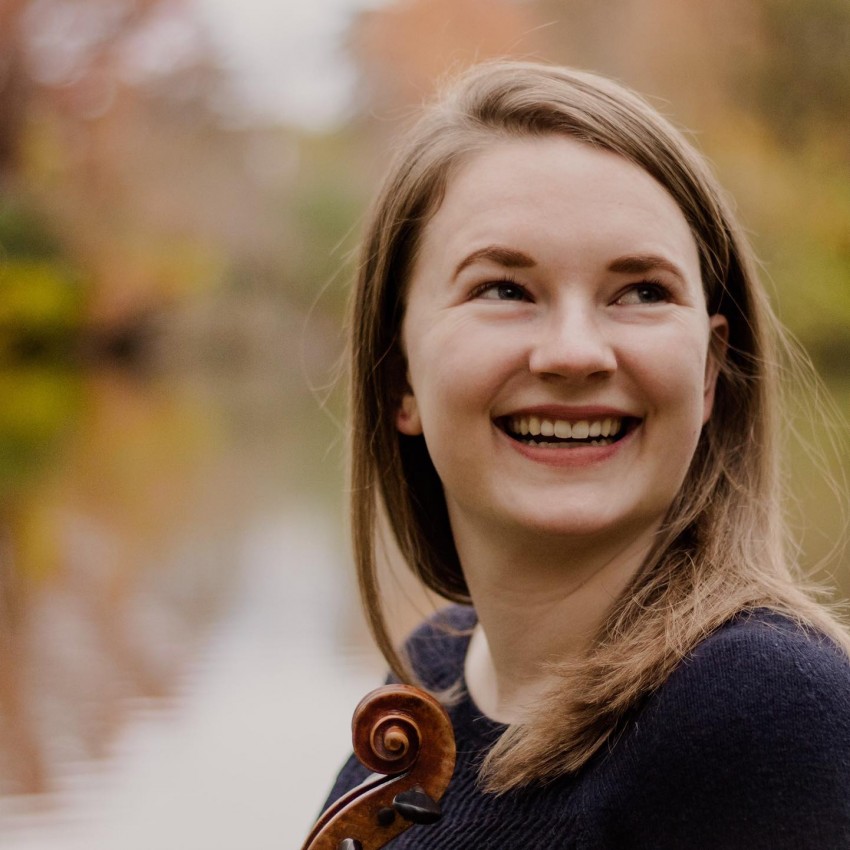 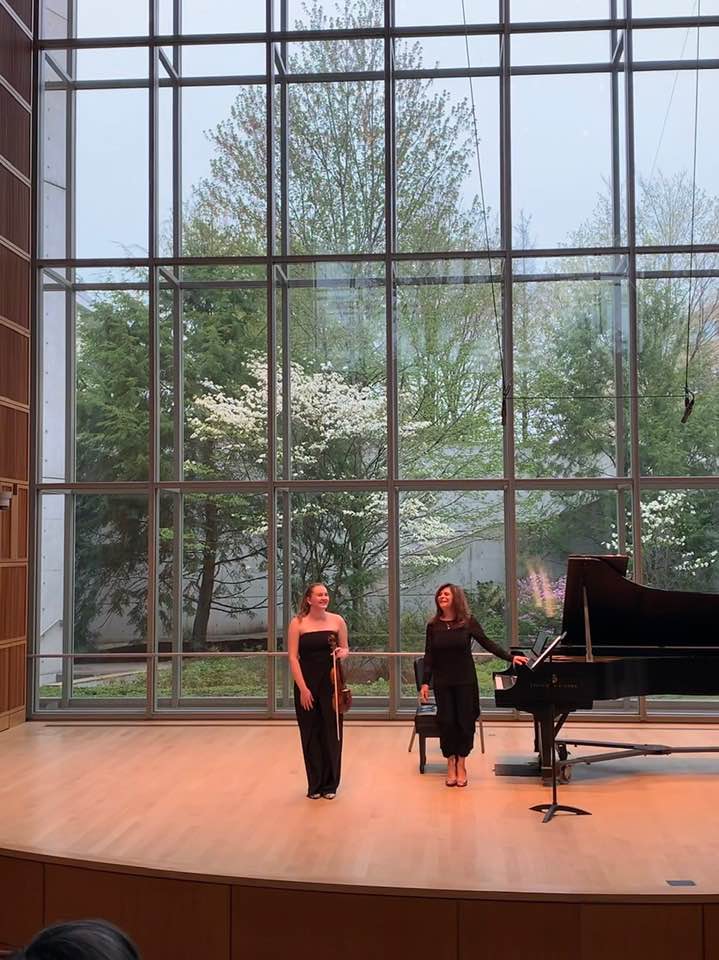 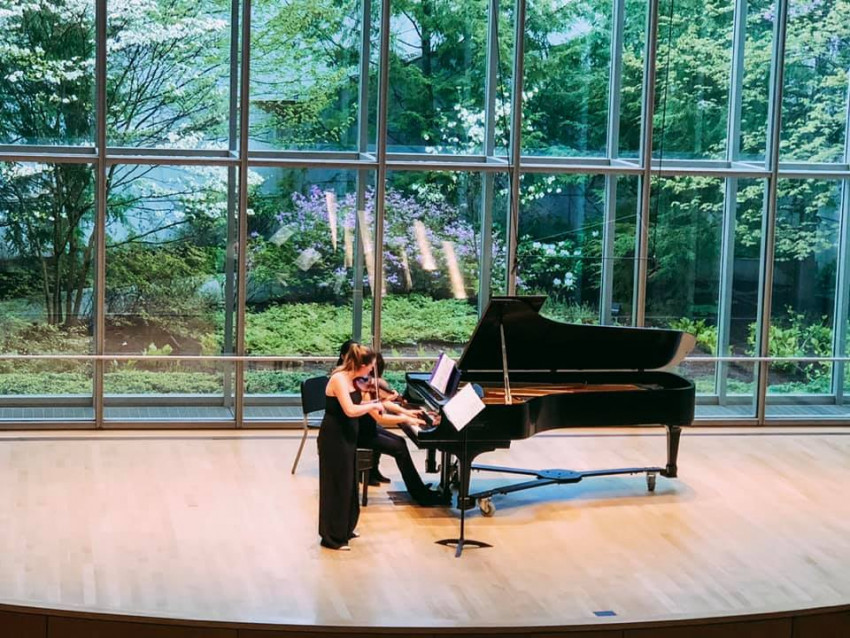 I'm a classically trained violinist living in Cleveland, available for solo, ensemble (currently in a string quartet that can also be hired), private/group lessons, recording, and more! I've loved playing in and around the city and love discovering new and exciting venues. I can play any piece you would like upon request and with proper notice. I hope we can work together!

My new husband says that we should give Kelsey 6 stars!! She did a beautiful job. My ceremony started off rocky but hearing Kelsey play brought a smile to my face and tears to my eyes. The music brought everything together and set the tone for the rest of the event. She was there on time and very accommodating of my needs and request.

Kelsey (violin) and Mia (cello) played 3 hours at my wedding ceremony and small reception.
We gave them a large variety of music to play, from Michael Jackson, Khalid, to Etta James, Ed Sheeran, Stevie Wonder.
There is nothing Kelsey cannot play. You will know each and every song, and it will sound amazing.
If you need a violinist or duo with a cello and you do not choose her, you are making a mistake.
She communicates very promptly, and is very sweet and polite.
Take my advice and book her!

Kelsey was perfect. I am so glad I booked her to play violin during our anniversary dinner. Kelsey is professional and kind and is very accommodating.

Most importantly, Kelsey's performance was flawless. Her violin playing brought us to tears. Kelsey was the highlight of our evening.

We highly recommend Kelsey! She was easy to connect with, was able to play any song we threw at her, and sounded fantastic. We heard so many compliments about her and Ellie Glorioso’s performance. Even one of the event coordinators at our venue who has been in the business a LONG time asked who our musicians were because she was so impressed. Thank you Kelsey!

Kelsey was absolutely awesome to work with. The music was magical and she worked with us to curate a playlist that made the whole event everything we could have dreamed of.

Thank you, Andrew!! Your wedding was so personal and beautiful. Thank you for including us!

Kelsey performed during my wedding ceremony and she was fantastic! She was very helpful with any questions I had. She made the process very easy! I couldn’t be happier!

Book her right away!

Kelsey is incredible, perfectly punctual and just a pleasure to have at our event. Her playing outmatches her attitude, filling our event with beautiful sound. Don’t read any other reviews, book her immediately if you need a world class violinist.

Kelsey and a cellist played for our wedding ceremony. Kelsey was wonderful at communication and taking requests. Just as advertised she came, played beautiful music and left. She required very little from us on the day. A great experience all the way through. I would highly recommend Kelsey!

When our daughter wanted a specific song for her wedding processional that included a violin part, we turned to GigSalad to find a violinist. We found Kelsey, who through her video portfolio, helped us decide to hire her to create the special musical moments desired. Her professional manner, talented musicianship and impeccable tuning and timbre transformed the ceremony into an elegant experience for our guests, and most importantly, the couple. She was easy to work with, and could play any arrangement we shared with her. Thank you Kelsey.

Kelsey is very talented and a true professional. She arrived on time, was friendly, and accommodating to our wishes. We had many wedding guests comment about how much they enjoyed her music. We would definitely book her again.

Kelsey was wonderful! She is an amazing musician and was always easy to get in contact with. Highly recommend her for your events!

Kelsey performed as a fiddler at my birthday party. She showed up on time and she began performing at the agreed time. I asked her to play a combination of Irish folk music and Vivaldi, and she did a great job with both. She reacted graciously when she was asked to switch from one musical style to another. The venue was a blue collar bar & grill, and the customers reacted positively to her performance. I doubt classical music will become a staple of the juke box, but I think everyone found the music refreshing and excellent. I know at least one customer asked Kelsey for her business card. Kelsey also played "Happy Birthday" as a sing along at the end of her performance. Kelsey did a great job, and I will probably hire her next year. I recommend Kelsey for any event that could use a violinist.

Kelsey was great! She was easy to work with, and played exactly what I requested. She was prompt, professional, and the perfect addition to our wedding ceremony and cocktail hour!!

Kelsey performed at my wedding and was amazing. Kelsey was also responsive and accommodating to my requests.
She is very talented and helped make my day memorable. THANK YOU!

Kelsey was very professional and made the wedding day even more special. Highly recommend Kelsey!

Kelsey did an amazing job ... she is quite talented!

Kelsey was a delight to work with! She was highly professional and very responsive in the planning of our
event. I wouldn't hesitate to recommend her, as she is a very talented and qualified musician. She really made our daughter's wedding day so much more special with her wonderful music!

Kelsey was amazing. She was right on time, easy to communicate with, flexible and great at what she does. She learned a brand new song just for our event. Highly recommend 10/10. Thank you for everything Kelsey!

The Perfect choice for the wedding ceremony music!

Kelsey was Fantastic! Professional, Talented, sweet, accommodating, Perfect! We were very happy with her and she did a great job playing for my daughter's wedding!!!

Kelsey did a wonderful job. She contacted me to make sure she had the right version of the song More. She even checked to see if I wanted a dress code. She was very professional and it was a great experience.

I will show up to the venue a half hour or more before the event beings and can play music of your choice. If you prefer, I can bring music that I feel best fits the situation. I will provide music for the event and take care of bringing everything I will need (music, stand, chair (if necessary)) etc. My goal is to cause no fuss, produce great music, and have you enjoy your event as much as possible!

Cleveland violinist Kelsey Ferguson started playing the violin at age 10. She recently graduated from the Cleveland Institute of Music where she studied with Jan Mark Sloman and achieved a double master’s degree in Violin Performance and Suzuki Pedagogy. Previously, she studied with Ivan Zenaty at the Cleveland Institute of Music and Olga Kaler at the DePaul School of Music in Chicago where she graduated in 2016. In both Cleveland and Chicago, Kelsey is an active freelancer, performing with some of top ensembles in the areas, including The Civic Orchestra of Chicago, Fifth House Ensemble, the Akron Symphony, and Cleveland Opera Theater. She also maintains a busy teaching schedule; in Chicago she worked for the Ravinia Festival’s El Sistema program along with other area string programs and private students. Now in Cleveland, she is a registered Suzuki teacher in books 1-10 and teaches violin at the Aurora School of Music, the Cleveland Music Settlement, Laurel School, City Strings, Gilmour Academy, the Bowman School of Music, and is the director of children’s choirs at St. Paul’s Episcopal Church in Cleveland Heights. In 2016 she toured with the violinist Robert McDuffy, REM’s Mike Mills and the Fifth House Ensemble performing Mills’ rock violin concerto. In the summer of 2018, she traveled to Harare, Zimbabwe to teach Suzuki violin, lead group classes and give recitals. She has had the privilege of playing in masterclasses for Paul Kantor, Frank Almond, Ilya Kaler, and Grigory Kalinovsky as well as attending highly regarded music festivals such as the National Orchestral Institute, Bowdoin International Music Festival the Orford Academie. For the past two summers she has performed with the New Hampshire Music Festival and Festival Napa Valley in California.

I can provide everything I will need, but I must know if the venue is indoor or outdoor before the event. If it is outdoor and it rains, for example, I will be unable to play. If you require amplification for a larger venue, the client will need to supply microphones/amplification materials.