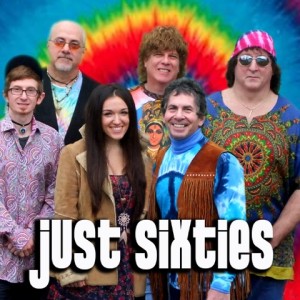 "Just Sixties" is the longest continually running sixties tribute band in the country! Dance the night away listening to the ultimate cross section of sixties music, from "Yummy, Yummy, Yummy" to Jimi Hendrix "Fire," including many one-hit wonders.

Have a fundraiser event? Their second show, "Just Sixties: The Stories...The Songs" is a 90-minute narrated show about the fads, current events, music and mayhem of the sixties, along with two-dozen songs performed by "Just Sixties." You'll hear timeless classics from The Beatles, The Beach Boys, The Doors, The Monkees, The Rolling Stones, The Dave Clark 5, Janis Joplin, Sonny and Cher, The Temptations, and so much more.

Be the first to review Just Sixties

Having played at Long Island’s top clubs since they started in 1982, Just Sixties is the longest continually-running sixties tribute act in the nation. They have performed for over 10,000 people in the Eisenhower Park bandshell, and warmed-up for such acts as Paul Revere and the Raiders, Felix Cavaliere’s Rascals and Jay and the Americans. Their repertoire includes the ultimate cross-section of sixties music including many one-hit wonders.

You can expect courtesy, promptness, professionalism and efficiency when booking Just Sixties - highly unusual in this business!!!

Drums/Vocals: Rob Gerver – Rob lives in Kings Park, holds a PhD in mathematics, has been a high school math teacher for 40 years and has authored more than 21 textbooks. This self-taught drummer, guitarist and keyboard player has been in a band since high school!

Guitar/Keyboard/Vocals: Donnie West – Don is a piano tuner/technician and is the owner of WestWorld Recording Studios in Plainview. In addition to playing guitar and keyboard, he also plays the drums and the sitar.

Guitar/Vocals: Phil Carollo – Phil lives in Medford, works for Honeywell Security and is a US Navy veteran that was part of the elite Submarine Force. Phil’s passion for the guitar started at age 8!! When he’s not performing, he enjoys spending time with family and friends.

Bass/Vocals: Ed Bowe - Ed lives in East Meadow and is a Certified Public Accountant and fancies himself as a ragtime historian.

Keyboard/Guitar/Vocals: Mike Gerver - Mike attends SUNY Geneseo and at 21 years old, is a published cartoonist of his series Cree Churrs!

Vocals: Lisa Vetrone - Lisa lives in Glen Cove and attends New York University. Though she's only 21 years old, she lives, eats and breaths sixties music! She claims she was born too late!!