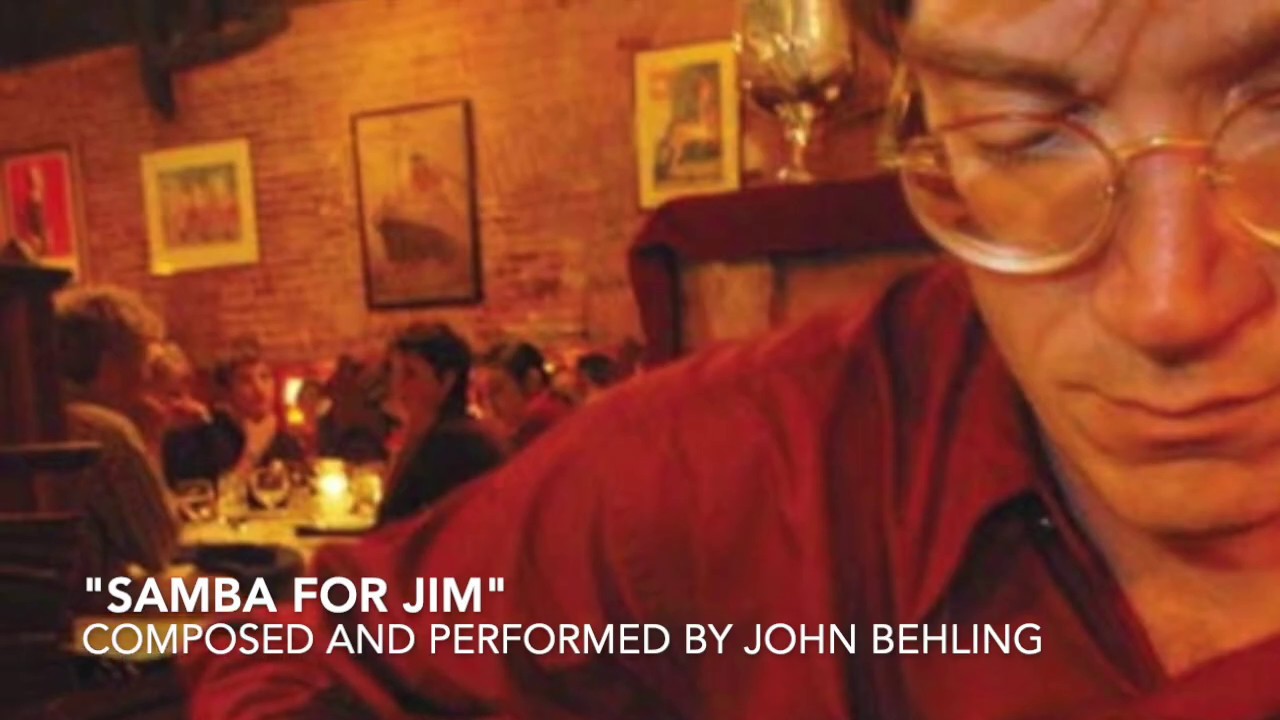 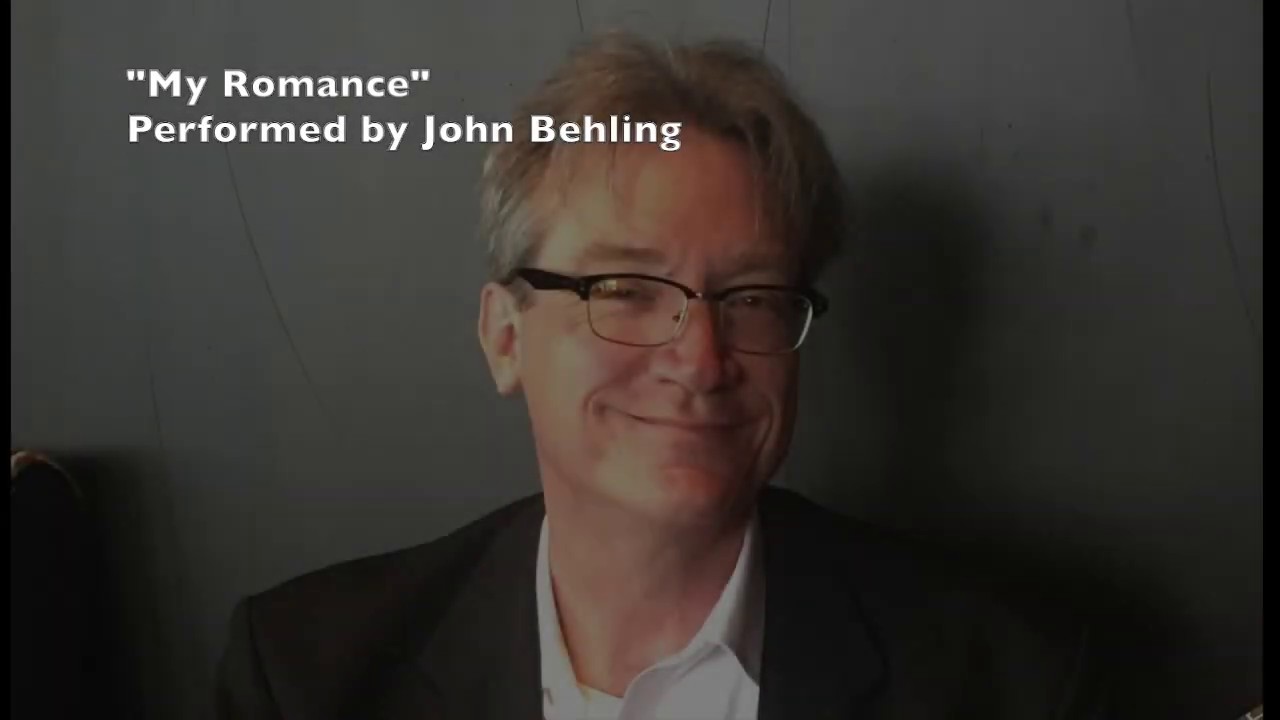 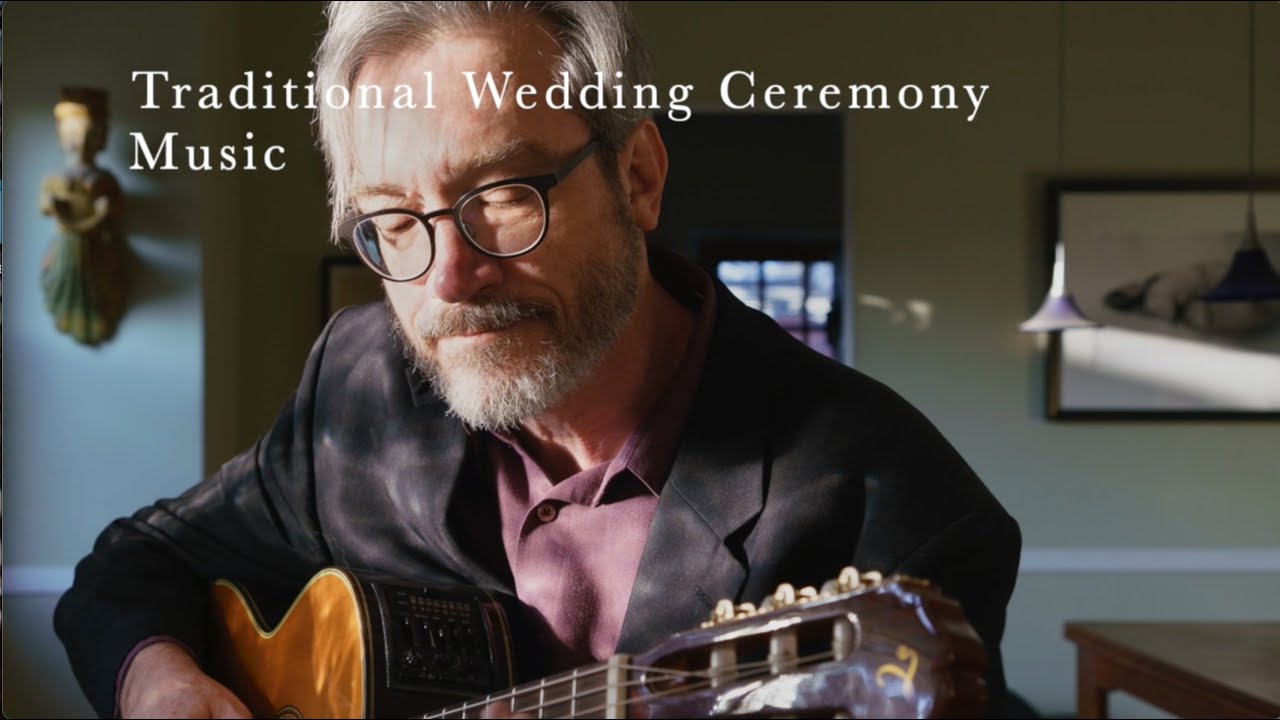 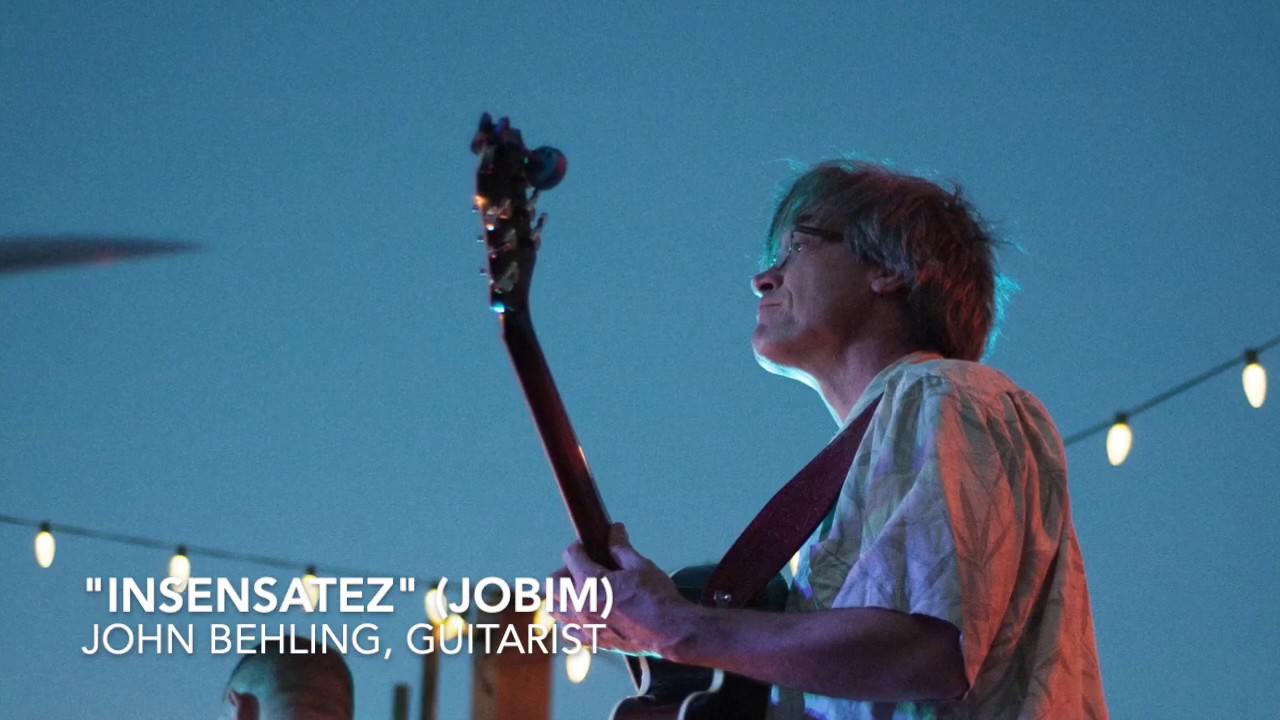 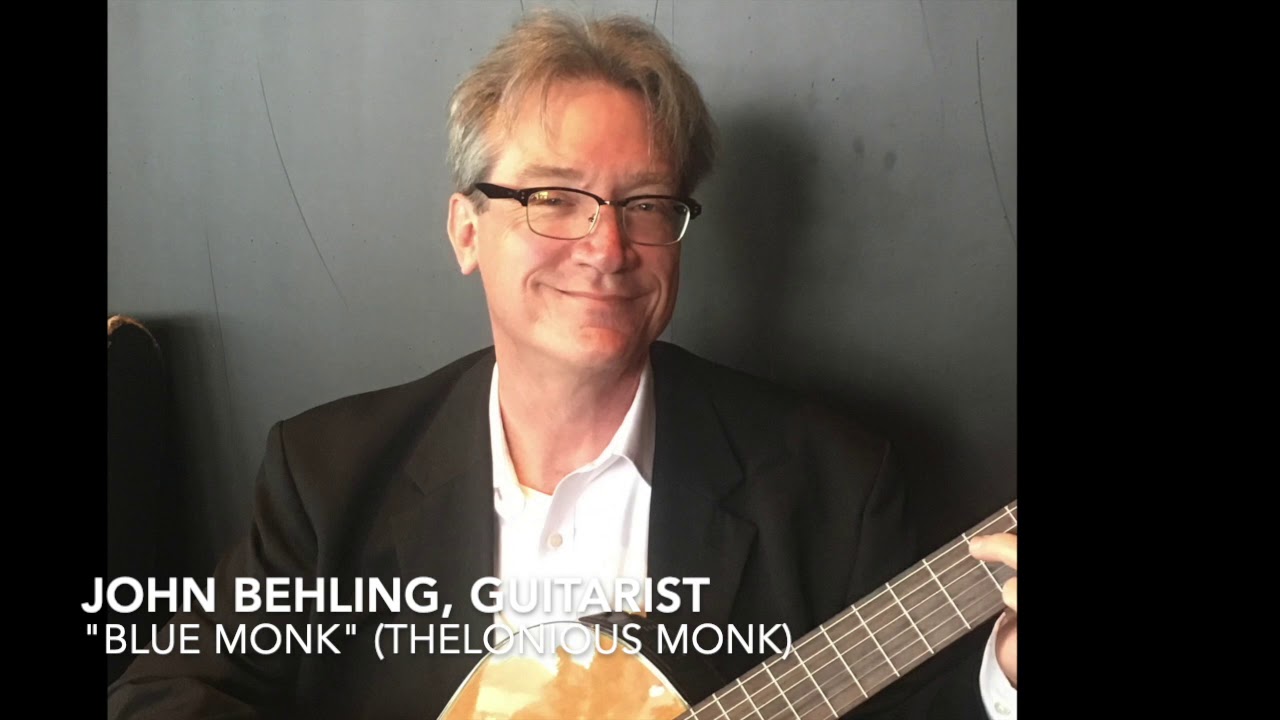 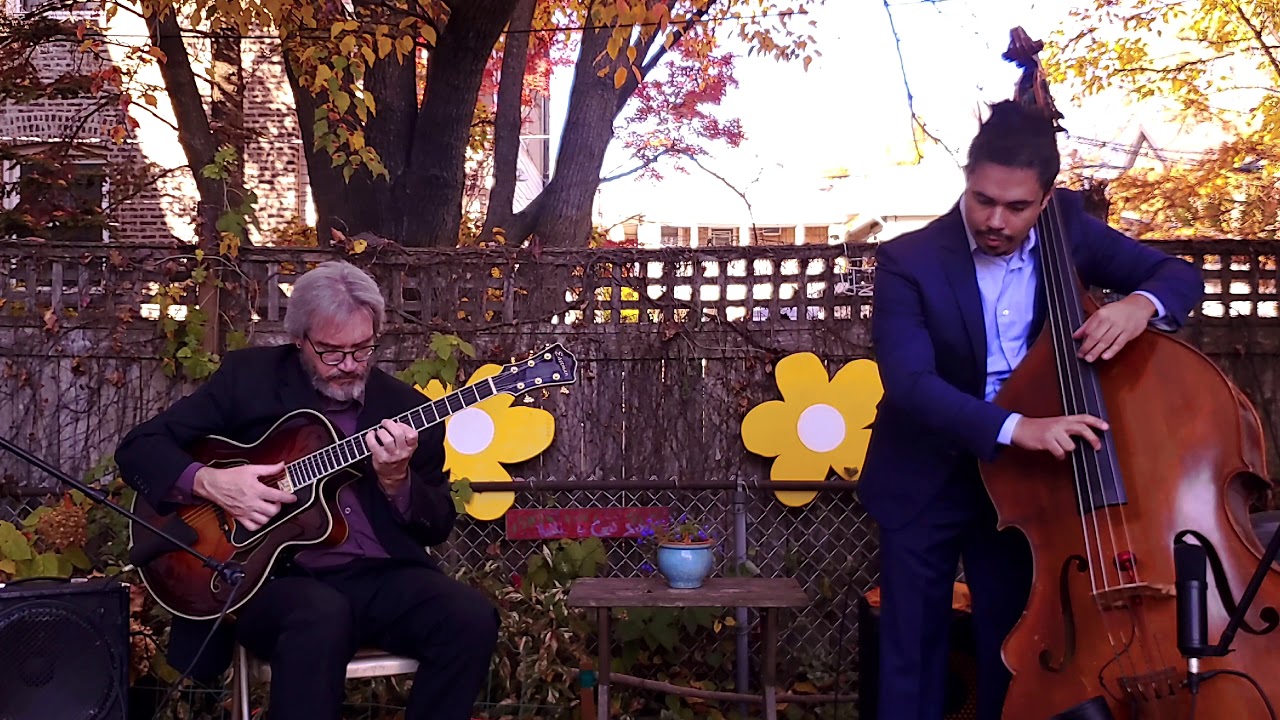 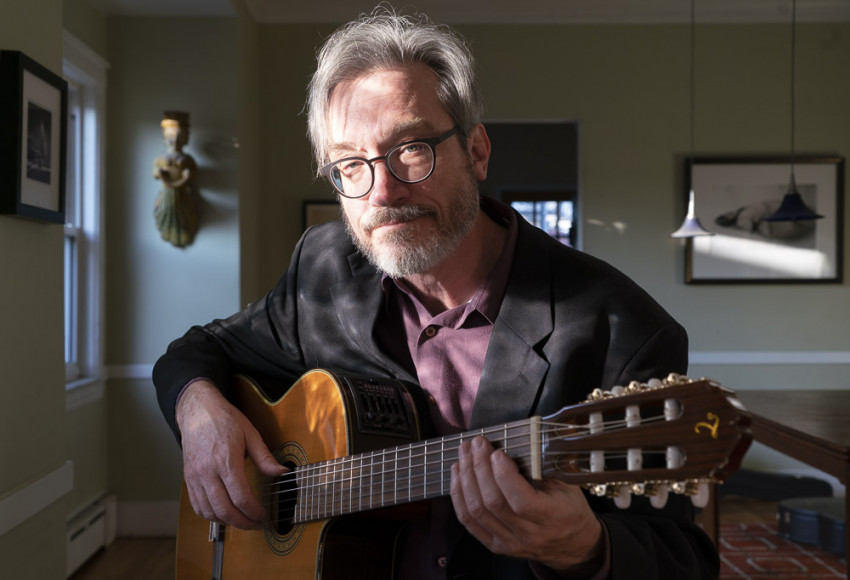 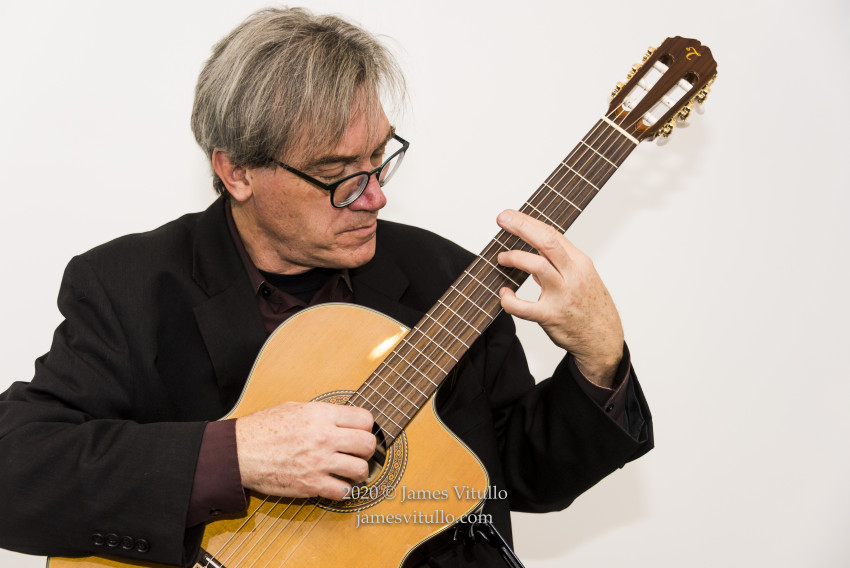 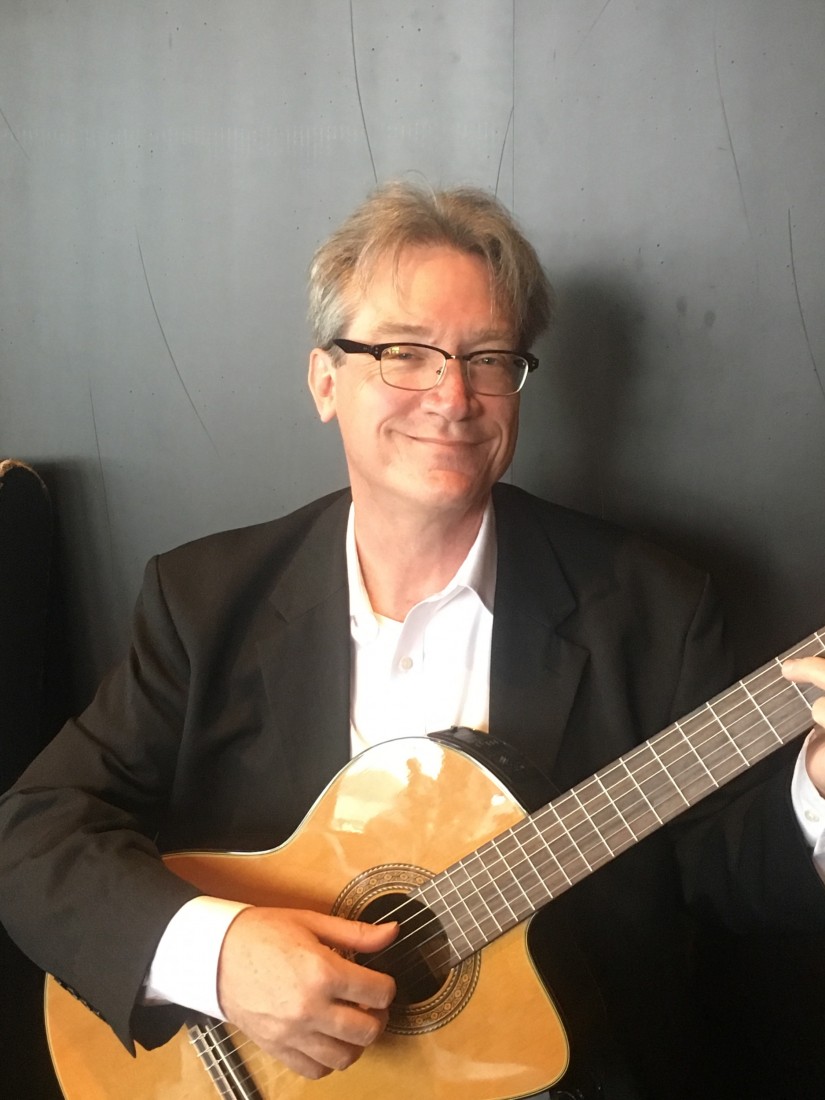 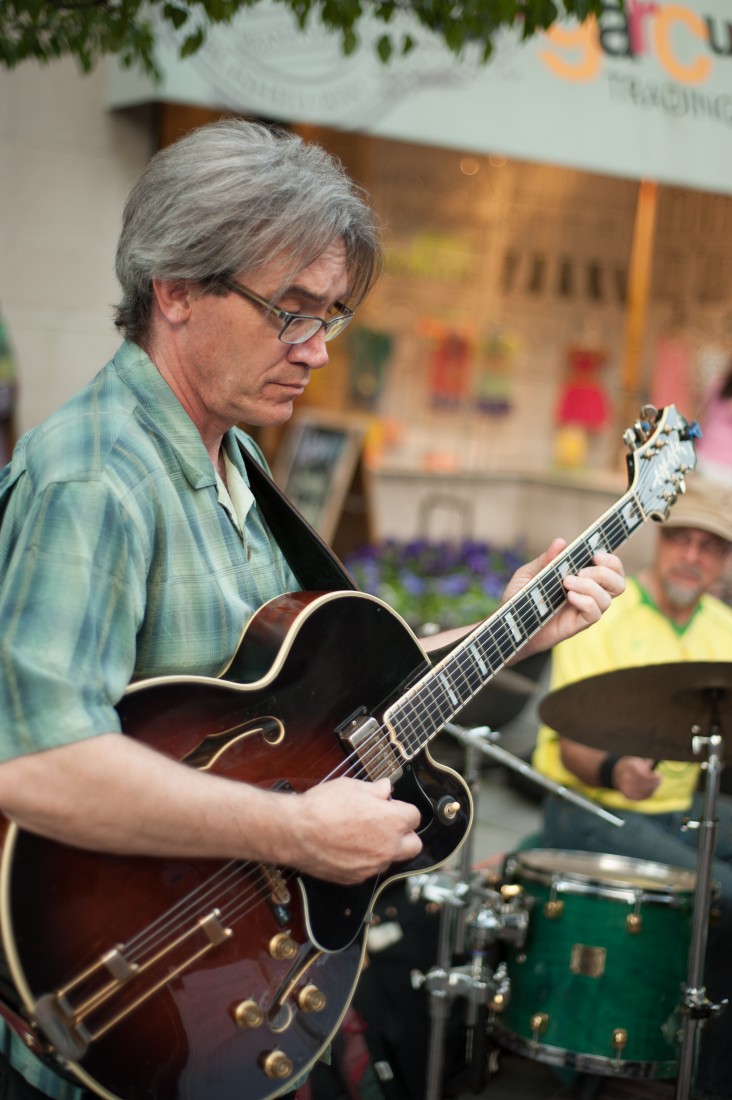 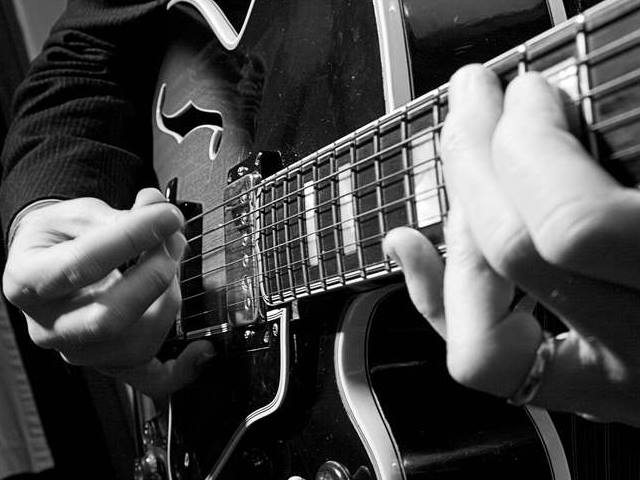 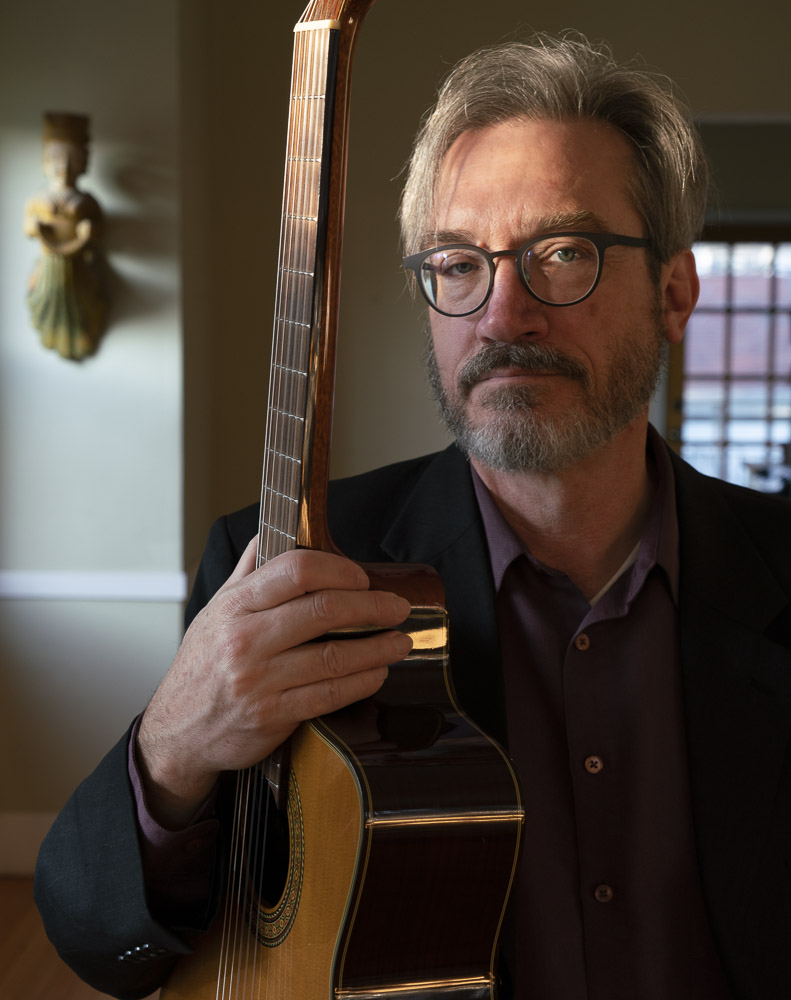 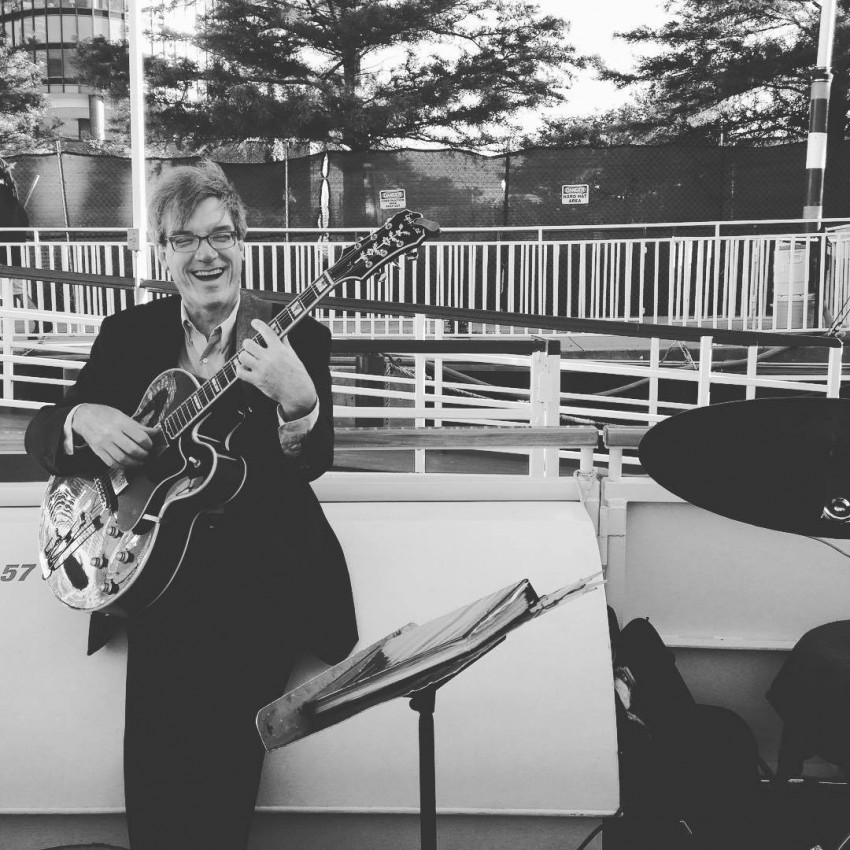 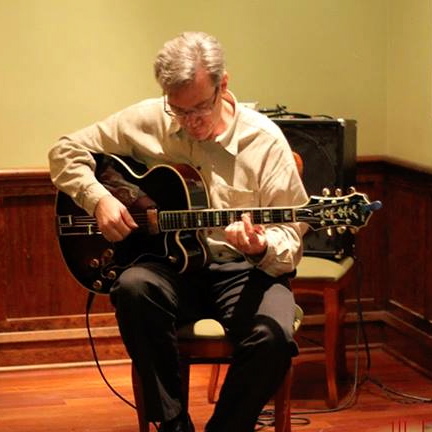 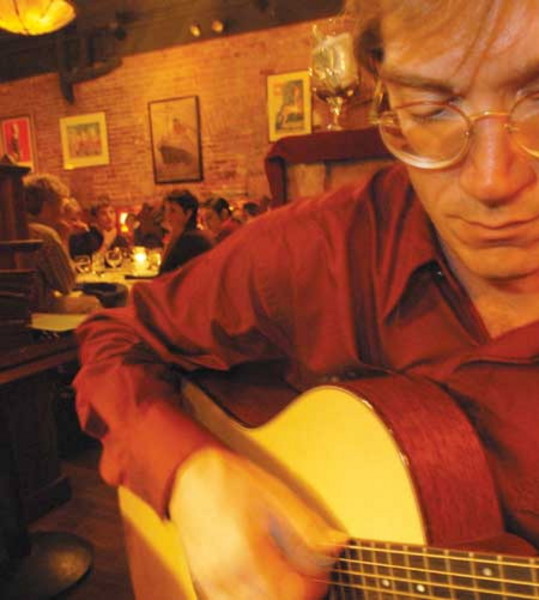 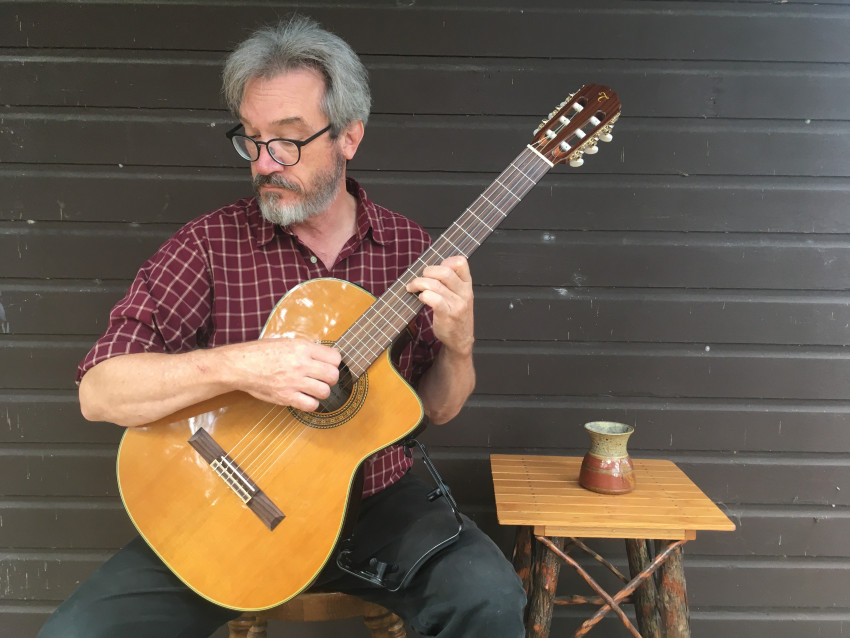 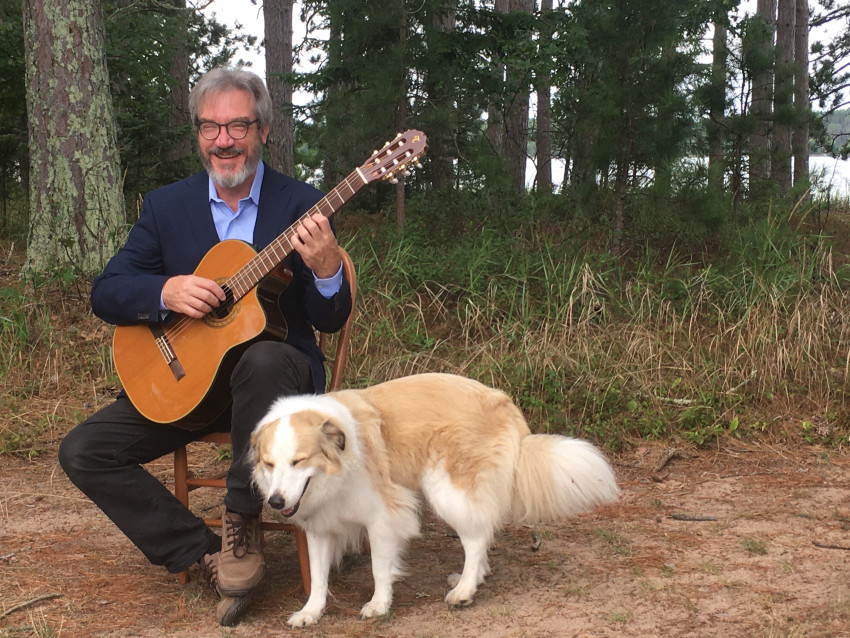 I am a guitarist who specializes in jazz, classical guitar music, and the music of Latin American and Brazil. I have been performing at weddings, receptions, corporate events, clubs, and festivals since 1984. Some of my career highlights include performances for President Obama, President Clinton, and concerts at the Kennedy Center for the Performing Arts. I work frequently throughout the Midwest as a soloist and with a variety of ensembles, and I look forward to being a part of your next event.

Background or foreground great either way

John was fabulous
Great music extensive repertoire you can have him as background music as I did or the feature event. He listened to my requests and even learned a special song for the bride to be

John was wonderful to work with and would highly recommend! Booking was super easy and John was easily available to discuss details of our event. Beautiful performance and would love to work with John again!

Wish I could give more than 5 stars!

John Behling is a fantastic artist! His music was a perfect blend, he is a consummate professional and entertainer. He arrived ready to adjust to the venue bringing sound equipment that we ended up not needing (we had a very small room). He knows his craft - he plays beautifully. We are so happy we found John, love to listen to him & highly recommend him

This is the second time we have hired John to perform for us. Last time was almost 3 years ago, and we are again happy with our decision to do so! The music was perfect as background for our lovely baby daughter's baptism luncheon. He was prompt with responses to any questions we had, checked in ahead of the event and worked well with our event coordinator. We would absolutely recommend him for any special occasion! Thanks again, John!

Thanks Sophia, I had a great time playing for you, your friends, and your new baby.

Incredible guitarist and so friendly!!!

John is the best. We would recommend him to anyone!! He was so great to work with, flexible for our scheduling and music preferences, and an INCREDIBLE guitarist.

Thanks Kim, It was a pleasure to play for you and Mercedes. I really enjoyed talking with your parents.

John was just incredible. We can’t wait to hire him again!

John was the absolute highlight of my Husband's birthday party! He is extremely talented and was so lovely to work with! All of our guests loved his performance - highly recommend!! :)

John is professional, friendly, accommodating and of course, plays beautiful music. He made our wedding ceremony special and memorable. Thank you!

Thanks Nick, Your wedding was lovely. It was a pleasure playing for you, and I am so glad that the rain stopped in time.

Everyone was so impressed by John’s talent during the event…we’d definitely have him join us again!

John played absolutely beautifully for my daughter's garden wedding ceremony (6/13/21). He arrived early and was set up and playing before the guests arrived. Extremely professional. John provided wonderful song recommendations upon my request and responded to all of my inquiries promptly. I highly recommend John and would hire him again.

From a long list of applying guitarists and after a phone conversation, we chose John based on his blurb, videos, and especially customer comments. His price was at the median of the group. This was a high-end wedding rehearsal dinner for 25, with folks aged 7 to 78. John arrived a half hour early to choose his room location and set up his sound system. He was already playing when people began arriving. I checked simple "guitar" on the form here because his play list is eclectic, as requested.

This kind of event must be a tough gig, with some tables very near the musician and others on the room's far side, with some people particularly interested in the music but most talking and laughing. Somehow, the sound level was comfortable nearby and completely audible at distance. John continued playing for awhile after the allowed time passed.

Really, almost as important as his technical expertise on the instrument is his overall friendly demeanor from first contact through our reception's close.

Thanks Bill, I had a wonderful time playing for you, your family, and your friends.

From the moment I heard him play via the YouTube videos he sent, I knew he was the one to hire. I also read his raving reviews and they gave me confidence. From the first song he played this afternoon, I was in awe. He is super talented. His jazz guitar skills are seriously top notch. My wife thought a recording was playing at one point. He really set the mood for my brother’s graduation lunch. It was an absolute delight and pleasure to hear him play and I hope you give others the opportunity to hear his musical gift. I won’t hesitate to hire him again in the future. Thank you, Mr. Behling. Thank you thank you.

Thanks Mark, I had a wonderful time playing for you and your family and friends. I am looking forward to seeing you at the Dock this summer.

John was perfect! We had him for our wedding ceremony and a little before and after and it was lovely, definitely hire John!

John provided a wonderful medley of songs before, during and after our wedding. We highly recommend him for any event!

Thanks. I had a great time playing for you and your guests at the Pabst Theater.

John was a HUGE hit at our corporate holiday event this year! Not only was the music amazing, but John himself was very kind, knowledgeable about all music, and had everyone in our building singing along! I would highly recommend him to anyone looking for a spectacular musician!

Thanks Melissa. I had a great time playing for you.

Super great person and guitar player can't wait to invite him back again!!!!

John played at our cocktail hour and he was amazing. Highly recommend him!

Great job all around! Very pleased......

Perfect accompaniment to our wedding

John's music was the absolute perfect accompaniment to our small, intimate wedding — his talent really helped make the our day extra special and our guests are still commenting on how nice it was to have the guitar interspersed in the ceremony.

He is a talented musician and a very nice person, it was an honor to have him part of our wedding.

Beautiful guitar playing was the perfect background for our holiday dinner party. John came early to set up and the music was flowing while the first guests arrived. Highly recommend John

Perfect fit for our event

I am so happy to have hired John for our son's baptism reception! He is a very skilled and talented musician, and his classical/jazz/latin mix was the perfect background music for our luncheon. We received so many compliments and several people asked where we found him. We also had a child guest who's birthday was the day of our event, and without hesitation John was able to play the happy birthday song for her. The family loved it! John also was very timely with his responses to my emails and questions leading up to the event, which was much appreciated. We will definitely keep him in mind for future events!

Thanks, Sophia. I had a great time playing for you and your friends. Thanks, too, for the box of Greek pastries. They were delicious.

The Best In All Ways

John was great at communicating with me about my event regarding times, layout and music. He was wonderfully pleasant to talk to and professional in planning and setting everything up. On top of it all, he is an amazing guitar player. He played my wedding ceremony and was amazing. We have several guitarists and musicians throughout the family and they could not get over just how good John was. He even brought along a microphone for us to use for the wedding ceremony. If I have another event where I am to book a guitarist or trio, the wife and I agreed already, John will be our number one choice.

Thanks, Kevin, I had a great time playing for your wedding.

John was fantastic. He's extremely talented and also very easy to work with.

John was terrific. He played a wide variety of music as a backdrop to our Champagne Brunch celebration. After the event, John stayed around and spoke with one of our guitar-playing residents.

John, you are a joy, and I will be hiring you again in the future!

Thanks, Debi, I had a great time playing for your event. I'm looking forward to the next time.

John was prompt in getting to and setting up for our wedding ceremony. He played our requests for the most part and was a great addition to our ceremony!

John did a beautiful job!

Thanks Karen. I had a great time playing for you and everyone at the party.

John was a pleasure to not only listen to but work with in planning this event! Highly recommended

Thanks, Greta. I had a great time.

Fantastic for our corporate dinner event

John was perfect for our event. Everyone enjoyed his music.

John was great and we got a lot of compliments on the music.

Right on time,professional, great music and very friendly. I would highly recommend John for any event. I would hire him again. Cheers, Terry

John performs a wide variety of music. Most performances include a mix of jazz standards, bossa novas, Latin American guitar music, and pop tunes. John is also an accomplished classical guitarist, and he enjoys playing classical repertoire at weddings, dinner parties, and other similar events. He can perform sets devoted to any of these specific styles. His music is exciting, romantic, elegant, and a lot of fun. It's great for listening, but also a stimulating background for conversation and interaction.

John has been performing professionally since 1984. Some of his career highlights include playing for President Clinton and President Obama, concerts as prestigious venues such as the Kennedy Center for the Arts, and work with outstanding musicians including Jay McShann, Patti Page, Jeremy Kittel, and many others. In addition to performing at many private events in Chicago, John can often be heard at venues such as the Jazz Showcase, the Chicago Magic Lounge, the Chicago Hilton, the London House, the Chicago University Club, the Langham Hotel, the Shedd Aquarium jazz series, Gaetano's, and the Chicago Botanical Gardens music series. Currently, he perform as a soloist, and he leads the Guitar Arts Duo, the Bonfim/Behling Jazz Duo, and the John Behling Trio. He also works regularly with many other musicians around the Midwest. When not performing, John teaches in the music departments of the University of Illinois, DePaul University, and Columbia College.

John requires no special equipment. He has guitars and sound equipment for just about any venue or event. All he needs is a chair and he is ready to go.

Polka Dots and Moonbeams
Autumn Leaves
The Days of Wine and Roses
Misty
My Romance
How Long Has This Been Going On?
Softly As In A Morning Sunrise
All The Things You Are
Everything Happens To Me
Don't Get Around Much Anymore
Blue Monk
I Sent For You
Blues For Herb
Body and Soul
Pennies From Heaven
A Foggy Day
My Favorite Things
Alone Together
When You Wish Upon A Star
Somewhere Over The Rainbow

No special equipment is required.