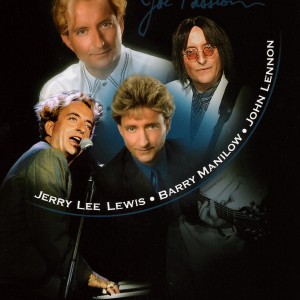 As Jerry Lee Lewis, Passion embodies the bravado and unpredictable nature of 'The Killer.' by playing piano and singing live in a fiery style of boogie woogie and piano pumping solos.
As Barry Manilow, Joe has performed at Barry's "Place Des Art Theater" in the Paris Casino in Vegas as well as venues for Legends In Concert throughout the USA.
Passion's John Lennon tribute is a favorite to Beatles fans everywhere. emphasizing John's solo years and early Beatle.
All shows are available with band or track.
I ALSO PERFORM ORIGINAL MUSIC

Be the first to review Joe Passion

I perform 5 tributes (Jerry Lee Lewis, Barry Manilow, John Lennon, Dion Demucci, Bobby Darin) I sing and play either piano or guitar live with musicians or as a solo act with musical backup tracks.
I work locally in southern Ontario or can fly to any venue.
I am interested in one-nighters or longer run engagements.

Joe has been a tribute artist for the last fifteen years performing as Jerry Lee Lewis, John Lennon, Barry Manilow and most recently as Dion Demucci of DION and the Belmonts.
Joe has been a full time professional musician – entertainer since he was 19. His main instruments are piano and guitar.

Joes portrayal of “The Killer” combines the energy and excitement of the young Jerry Lee Lewis with the humor and bravado of Dennis Quaid featured in the film ”Great Balls Of Fire”(complete with flaming Piano!).

For Lennon, Joe recreates the Icon by performing songs from the Beatle Catalog as well as Johns solo years. The climax of the show is “Imagine” and a medley of “A Day in the Life”/ “Strawberry Fields”/ and “All you need Is Love” that runs in conjunction with a slide show of 140 slides of Johns’ life.

In the Barry Manilow character all the favorites are performed from “Mandy” and “Copa” to “I Write the Songs”. (Very Broadway meets Vegas and perfect for pop music lovers and romantics everywhere.)

Performing as Dion Joe brings alive the fifties doo-wap songs of Dion and the Belmonts with favorites like “The Wanderer”, “Runaround Sue”,”Teenager in Love” and the all time folk classic “Abraham Martin and John.”

As the iconic Bobby Darin, Joe brings to life the meaning of “COOL” set down by the immortal Bobby himself. King of the pop charts and Vegas Lounges through the fifties and sixties Darin set eclectic milestones with all of his hits such as; Splish Splash, Dream Lover, If I Were a Carpenter, Mack the Knife, Beyond the Sea and many many more Jazz and Swing classics.

I carry a small PA for local gigs in Southern Ontario if needed,
I usually bring my own back line locally. (Piano, and or guitar rig)
If travel is required far a field I would expect P.A. Lighting and back line equipment supplied as well as transportation, accommodation and per-diam or meals.

I do many different shows that each require specific set lists.
Contact me on this to work out a suitable list for your event.

As a tribute I work to duplicate the original acts I do - search me on you tube. However I am also a singer songwriter and record my own original music.
My influences there are good singer songwriters. I like old school Classic Rockers, R&B and Motown.
The Beatles, Paul Simon, Randy Newman, Bob Seger, Bruce Springsteen, Neil Young, Temptations, Stevie Wonder...