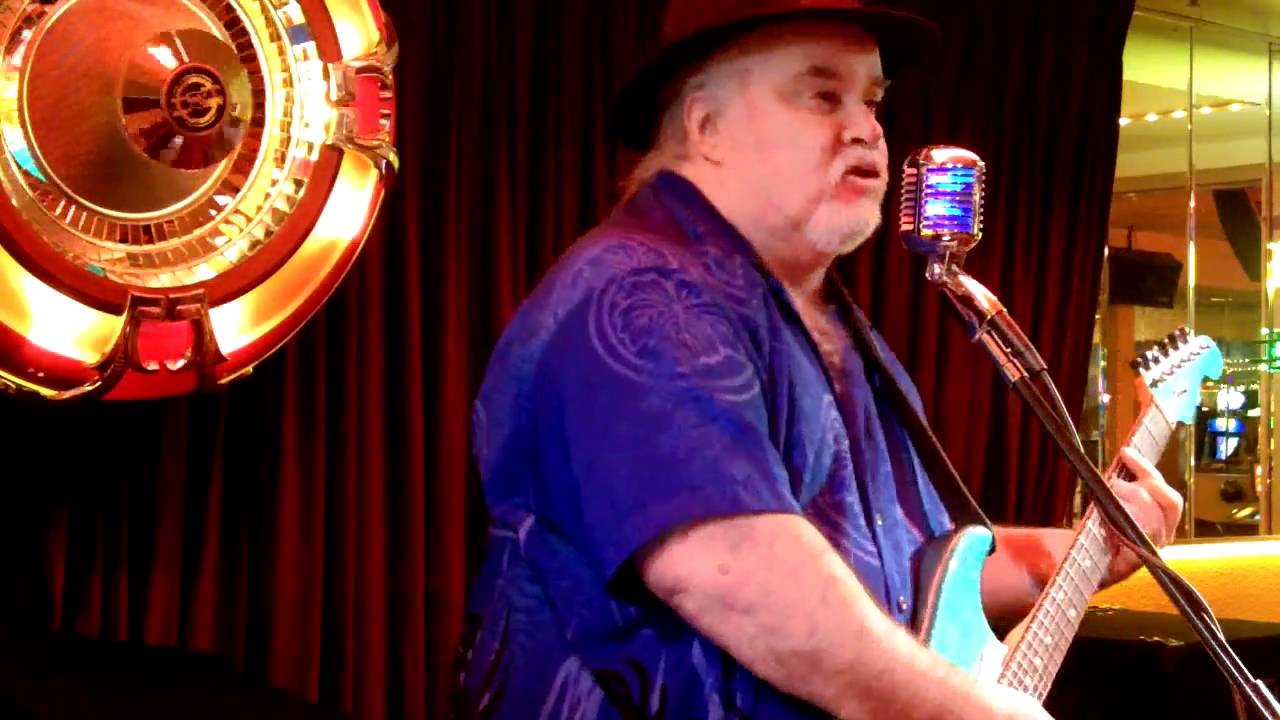 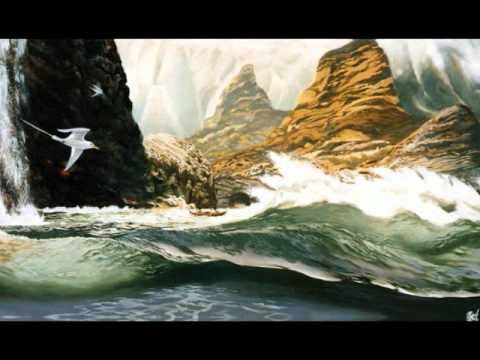 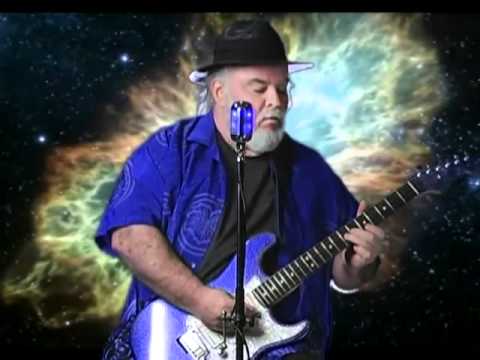 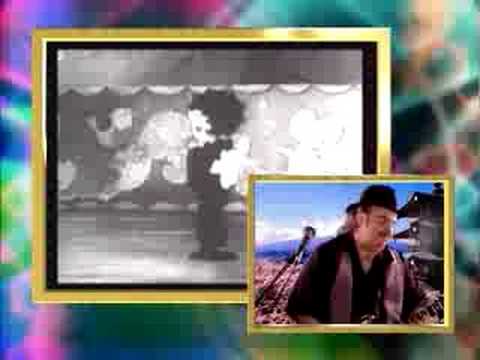 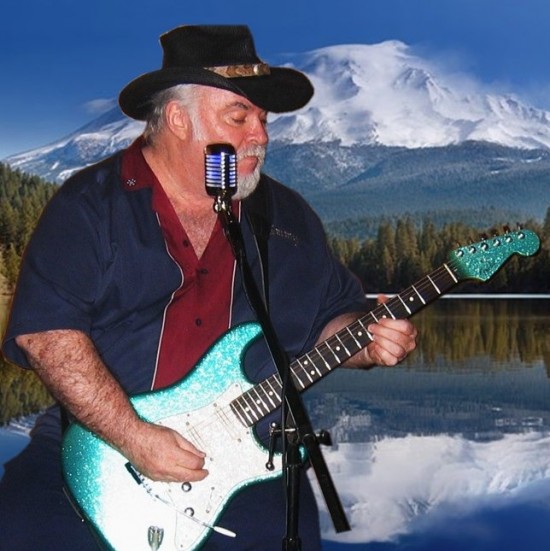 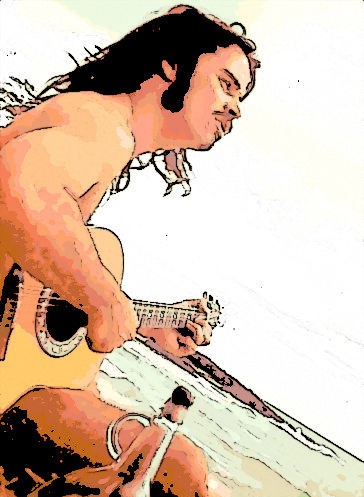 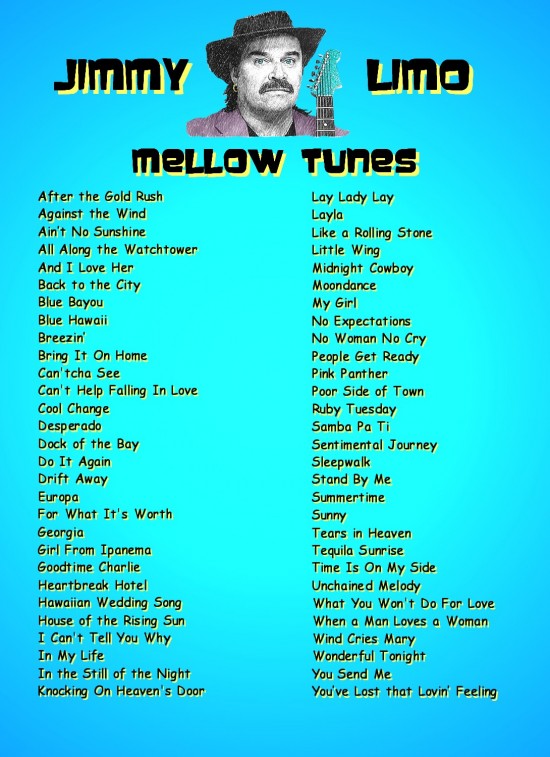 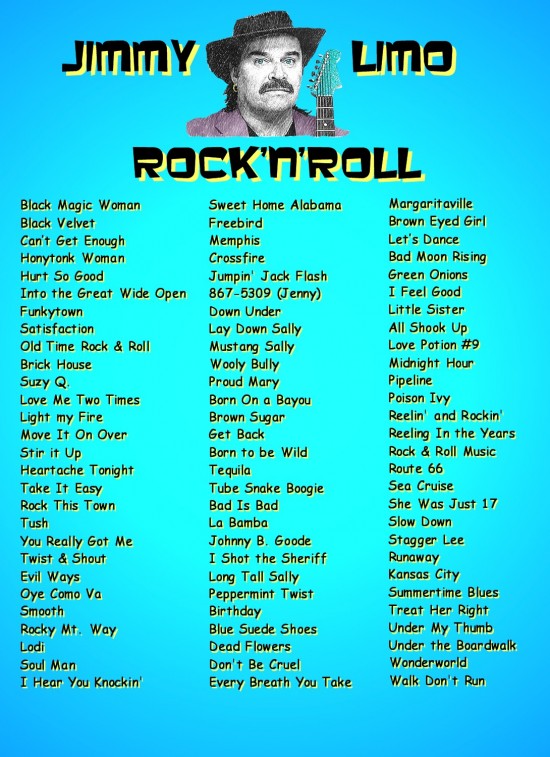 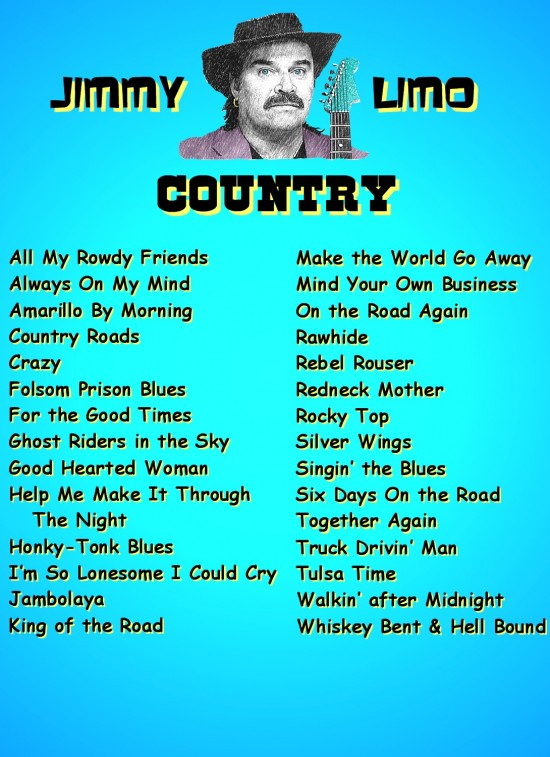 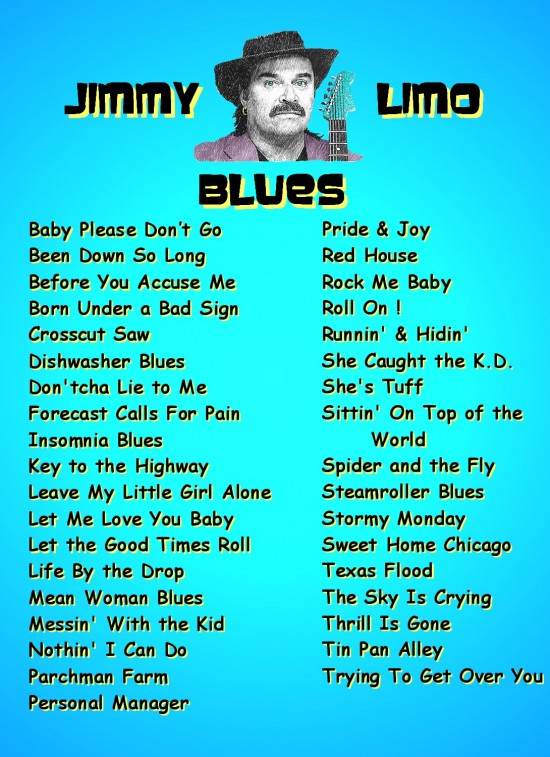 Want LIVE music for your HOLIDAY PARTY ? Jimmy Limo, is a professional 1-man-band, 300 song repertoire, oldies rock'n'roll, blues, classic country, smooth-jazz and more. 48+ years professional experience, over 10,000 gigs. I'm available for VIRTUAL performances ! Private parties or corporate functions. I can use pictures of your living room and Christmas tree, your corporate headquarters, your winery, or anyplace you can imagine ! I play requests. Get together with a bunch of friends or clients on ZOOM, and I'll stream my LIVE SHOW to you. Put it on your BIG SCREEN TV and turn it UP ! No Covid-19, drink all you want and NO DUI ! Check out "Jimmy Limo SHOW #24" on YouTube, from Dec 5, 2020.

Jimmy Limo played for my moms 80 th birthday party. He came early to set up
And played the perfect songs. I couldn’t be happier he is ado a very kind man!!

Jimmy did a wonderful job at our event, we will have him back next year!

Jimmy played soft background music for an hour or two, then picked up on our group's age and musical tastes, and we had some sing-alongs.
One of our guests is an Hawaiian dancer, so he played some wonderful Hawaiian music as well.

Nothing but fun music and laughter!

We hired Jimmy to be the cocktail and reception entertainment. He also did the wedding processional and recessional. He did a fabulous job!!! He was there on time and kept the evening going, he personalized our first dance. He added in a few Christmas songs, it was awesome and helped make the spirit.

Jimmy played at me and my husbands wedding rehearsal dinner and we could not have been happier! He was a wonderful addition to our laid back evening with our nearest and dearest - everyone is still talking about how amazing he was! His song choices were perfect, and he plays beautifully. He even played a special lullaby for my little cousin as his mom rocked him to sleep on the dance floor. So sweet. We could not recommend him more highly - he would be a wonderful addition to any special event!

JIMMY LIMO - One-Man-Band
Jimmy Limo is a professional guitarist and vocalist whose music has been entertaining crowds since 1972. Born and raised in the outskirts of Los Angeles, he grew up listening to the musical legends of the ‘50’s and ‘60’s. His musical inspirations run from the blues of Albert King and Eric Clapton, to the jazz of George Benson and Miles Davis, to the classic rock of the Ventures, the Stones, Motown and Jimi Hendrix’s mellow ballads. His father Rudy played a mean blues and boogie-woogie piano.
After attending the University of Southern California on a full scholarship, he left the smog and crowds of L.A. in 1972 for the musically inspirational beauty of the Hawaiian Islands. It was there that he developed his unique and melodic guitar style. For nearly twenty years he performed in luxury resorts, restaurants and nightclubs on virtually every island. Besides playing music full-time, he also owned and operated his own guitar shop, “Mauna Kea Music” and opened the popular and wildly successful restaurant/nightclub “the Redwater Cafe” on the Big Island of Hawaii.
In 1990 he left the islands for the burgeoning blues scene in Portland, Oregon, where he played regularly until leaving for Las Vegas in 1999. In 11 years in the “City of Neon Dreams” he performed over 3,000 gigs.
At the beginning of 2011, he packed up and moved to Weed, California, high on the slopes of beautiful Mount Shasta, where his parents have lived since 1994. Mom’s health was getting shaky and he came up to help Dad and spend some “quality time” with “the folks”.
“When I lived in Hawaii and Oregon, I always lived waaaay out in the country, in small towns. Las Vegas is a frantic and plastic city, and is ranked one of the worst places to live in America. Now I’m living in one of the most beautiful places in America..... I’M HOME !!! Hallelujah !”

some basic stage lighting would be nice