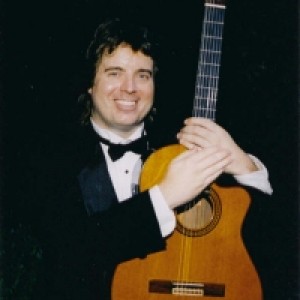 “The Best In Orlando”

35 years of performing experience that is second to none, attention to every detail to make sure all your music is perfect to your tastes and flows smoothly from beginning to end. As opposed to many performers, I play a mixture of many styles, from the elegance of Classical music, to Jazz standards, to Spanish/ flamenco, to Rock and popular music....guaranteed to please just about everyone in attendance. DJ included for wedding receptions, so you get BOTH the elegance of a live musician for the ceremony, cocktail hour, and through dinner...and then the party of a DJ for after dinner fun and dancing! Experienced coordination skills ensure that everything flows smoothly from beginning to end, so you can relax and don't have to worry!

Born and raised in Cleveland, Ohio, Jeff has been performing, recording, and teaching music for 35 years. Performing over 150 shows each year, Jeff is an extremely versatile musician, and has toured extensively throughout the United States and Canada. He performs in a variety of music styles and settings including solo Classical guitar, Jazz and Rock groups. He is a graduate of Baldwin Wallace College in Berea, Ohio, where he received his Bachelor of Music degree in Classical Guitar Performance. Jeff has studied with many world-renowned artists including Stephen Robinson (a protege of the great guitarist Andres Segovia) at Stetson University in Florida, and composer/guitarist Loris Chobanian at Baldwin Wallace College, as well as with members of the Cleveland Orchestra, Ohio Chamber Orchestra, and vocal studies with David Gooding, director of the Cleveland Opera Chorus. He has performed in Master Classes for eminent guitarists such as Eliot Fisk, Eduardo Fernandez, Benjamin Verdery, Bruce Holzman, and the Pearl and Gray Duo.

Jeff has performed for numerous dignitaries such as Orlando Mayors Glenda Hood and Buddy Dyer, Governor of Ohio George Voinovich, numerous Congressmen, former U.S. Secretary Of State Alexander Haig, and ten other U.S. Secretaries of State. In June 1995, Jeff and his music were featured at an art showing honoring artist Thomas Kincade. He has also performed in many musical theater productions. In 1996, he played onstage guitar, sang, and acted in the Cleveland Opera’s production of Dale Wasserman’s Man of La Mancha. Other musicals he has performed in include Evita, Working, Hannah…1939, and Leonard Bernstein’s West Side Story.

He has performed with numerous immensely talented musicians over the years, including members of the Ohio Chamber Orchestra, Orlando Philharmonic, and Professors at numerous universities, among many others. He has also played Renaissance Lute with several Renaissance ensembles.

Since moving to Orlando in 1996, Jeff has performed at all of the major concert venues in the area, including House Of Blues concert hall, Hard Rock Live, Bob Carr Performing Arts Center, Orlando O-rena, Orange County Convention Center, as well as all the world famous theme parks including Walt Disney World, The Disney Institute, Universal Studios, Universal Islands of Adventure, and Sea World… and private events at virtually every area museum, hotel, country club, and fine dining restaurant.

Jeff has also been interviewed and performed live on several Orlando radio stations, as well as being featured in a live solo classical guitar concert broadcast on Orlando area television. He continues to perform numerous solo classical guitar concerts at universities, concert halls, performing arts centers, and churches throughout the United States.

His experience also includes extensive performing in jazz and rock music settings. He is constantly writing, recording, and performing with both the Jeff Scott Jazz Group, as well as the Jeff Scott RockGroup, his three piece rock project.

Jeff has conducted countless music seminars in Orlando area schools on the guitar’s history and it’s role in music. His teaching experience extends over the past 35 years in the Cleveland and Orlando areas. For several years he was director of the guitar department at the Florida State Conservatory of Music in Orlando, a private music school. Working with students of all styles and levels, he also continues to give instruction and workshops on guitar.

Jeff is currently performing in Florida and throughout the U.S. as a solo classical artist and also in a variety of musical combinations including duos, trios, & quartets, playing a variety of different music styles including Classical, Jazz, Spanish/Brazilian, and Rock music.

For classical music, he performs on Ramirez guitars, known as one of the finest guitars in the world, which were also used by the great Andres Segovia. Jeff also is currently performing with a guitar made by Orlando luthier Robert Desmond, which has a superb sound and projection, with the design modeled after legendary 19th century luthier Torres.

For Jazz music, he is currently performing with his jazz projects on 7 string jazz guitars built by luthiers Gary Mortoro and Robert Benedetto, which incorporate an additional lower 7th string that extends the guitar’s bass range, hence giving the effect of an added “bass player” to fill out the sound.

For Rock music, Jeff favors vintage electric guitars made by Charvel (Model 6), double neck guitars made by Ibanez and Carvin, and a variety of other 6 string guitars by makers such as Charvel, Ibanez, Carvin, Dean, and Yamaha. All amplifiers are made by Marshall (200 watt Marshall Majors).