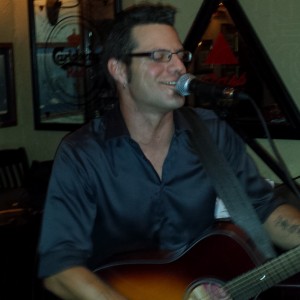 I am an energetic singer/songwriter. My performance consists of cover music spanning the era's and genre as well as my original material. I have a flare of country/rock/folk. I love to entertain telling stories behind the chosing of covers and the inspiration of originals. I love to engage my audience. People leave one of my performances feeling like they were a part of it. My performances can be suited to the needs of any client.

Did an exceptional concert for my in-laws.

Went out of his way to help arrange a surprise outdoor concert for parents living in Burlington. Great enthusiasm

Thank you so much Rodger. It was my pleasure. I had a great time performing for Bill and Ann.
We quietly set up in their driveway while they though they were expecting a delivery.
It was a beautiful day for us to be there for a surprise private concert.
The whole thing was filmed and I will be providing them with a DVD for a keepsake and digital format for family members who were unable to be there due to our current situation.
Thanks for choosing Jeff Pilon Music.

It can be expected that each performance will be high energy. The audience will be asked to participate at certain times. Stories will be told surrounding the origin of my original songs as well as experiences with the covers chosen. I really try to have the audiance feel like the are involved in the show not just sitting there. I strive to truly entertain not just sing and play. I also self promote through social media and my own site (link hidden). I also personally design custom posters for each performance that can be use online and in house in small or large format.

Jeff Pilon is no stranger to the stage. By the age of fifteen, he was delivering powerful and emotional performances every time no matter how big or small the venue. Jeff has hit stages from Ottawa, ON to Vanderhoof, BC where he took 3rd place in the county fair talent contest, which was judged by Canadian country artist Jack Jackson.
He took several years off from typical venues. He stripped down his performance to its most basic form and played for the toughest audience there is. A moving one! Street performing brought a new life and energy to his performance. He was a regular attraction at Toronto’s Historic St. Lawrence Market.
Jeff’s original music is edgy and fun with undertones of country, rock and even punk. Though he was once told his sound was like Bob Dylan with a little Cat Stevens mixed in, he has a style all his own. He pours heart and soul into every note. His audiences respond in kind with their singing and dancing. With a cover repertoire that spans from rock to country and over many eras, there is something for everyone.
Always moved by a good cause, over the years Jeff has lent his talent to several charity events. He’s played The Relay for Life for Cancer research as well as Summerfest in support of Muscular Dystrophy, both in his hometown of Sudbury, ON. He is exceedingly proud to have been a part of Lightfest 2012, a walkathon and festival in support of Light Patrol, a Homeless Youth Outreach Progam, in Toronto. Lightfest 2012 took in over $60,000 in one day. As well as his performance on the main stage, he organized street musicians throughout the walk-a-thon route and festival.
You can have Jeff come perform at your club or festival, or have him come play your kitchen or campfire. Whatever the venue or show size, you will not be disappointed. He will put a spring in your step and a song in your heart.

I provide the following equipment to perform my show.

This is a set list for a 3hr booking.

SET 3
Down Under - Men At Work
Chariot - Gavin Degraw
Mary Jane - Original (on EP)
Lukey - Great Big Sea
We Had It All - Original
50’s Challenge - Audience challenged to guess how many songs in 50's medley with same chords to win copy of EP
Breakfast at Tiffany's - Deep Blue Something
Beer For My Horses - Toby Keith/Willie Nelson
Ahead by a Century - The Tragically Hip
Waylon,Hank,Merle - Original
Brian Wilson - Bare Naked Ladies

I have been influence by a broad scope of performers. Old Country like Merle Haggard and Hank Williams. New Country like Toby Keith, Keith Urban and Brad Paisley. Also old and new Rock Like City and Colour, David Wilcox, Eric Clapton, Stone Temple Pilots, 7 Mary 3 and Matchbox 20 to name a few. All of this comes together in a sound the seems fmiliar but is uniquely my own.