2 reviews Get a Free Quick Quote
Add to Favorites 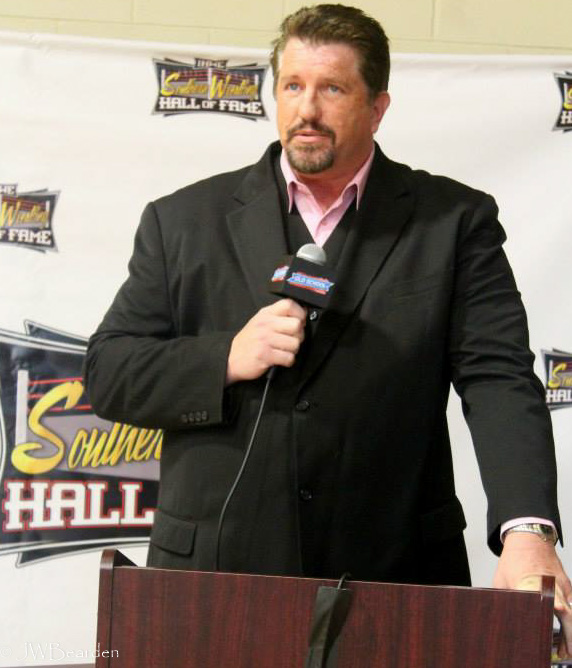 Accepting my induction into Hall of Fame

Jeff gave the commencement speech at our alternative high school in Eastern Kentucky. We have a wonderful student body, but many of our students come to us having faced significant adversity throughout their lives. Jeff, not only gave a message that resonated with our students, but had several of them totally enthralled because his struggles were something they all could relate to. Jeff is down to earth, flexible with the schedule, and wonderful to work with. He is open, honest, and our students appreciated his candor, openness, and willingness to spend time talking with them before and after the actual event.

Our air conditioning went out the week of graduation...so the room where the event was held was around 90 degrees. He still showed up in a three piece suit and stayed long after it ended to talk with students and staff. We are very pleased our decision to hire Jeff and would have him back again and again.

A big man with a big message

On June 5th, Jeff Bearden visited Crowley, Texas and took part as an invited and promoted speaker for the second annual IHWE Anti-Bullying Rally. Jeff brought with him 25 years of experience of being in front of thousands of spectators, due to his background in pro wrestling. Jeff has travelled around the world as a featured attraction, and, during that time, he has learned all kinds of facts about people, cultures, and life. Jeff was a great speaker for many different reasons. I believe the biggest one, both literally and figuratively, is his physical stature. Jeff, standing at seven feet tall and 350 pounds, shows the individuals that he is speaking to that even the biggest human beings feel the same emotions as everyone else. Jeff also speaks intelligently. I believe everyone, no matter what background or belief, would be engaged by Jeff, no matter what the topic of his speech.

I’ve known Jeff for many years, He has that intangible that so many artists have, to capture the minds of everyone in the room he is in. He walks into a room, and everyone pays attention, which is something that can’t be taught or bought. You either have it or you don’t, and Jeff has it. He has the experience of performing and has worked with athletes, actors, and TV personalities. He has taken away something from all of his years in travelling and meeting people.

I highly recommend booking Mr. Bearden to speak, especially on the topic of bullying and teen issues. Bullying is a lifelong epidemic that isn’t prejudiced. It occurs every hour of every day, all over the world. Very rarely do people get to meet an individual like Jeff. Jeff is what kids read about in storybooks, he’s a giant! I believe children and adults alike would respond to Jeff in a very positive and meaningful way. I can’t wait for him to come back down in the near future and speak again for us.

Jeff was inducted into the Southern Wrestling Hall of Fame on June 7th, 2015—he will be talked about for an eternity. I can’t say enough about this one-of-a-kind human being.

It was such a pleasure to work with David and his organization. The kids that were in attendance were a joy to speak for and to talk to afterwards. I look forward to coming back in the future to speak with the kids again.

My speeches are tailored to meet the needs of your audience, based on us having calls before booking the event. Some special talks that I offer include: talks for upper grades to prepare them for the challenges that they will face as they enter the next phase of their lives, talks for athletes, removing labels placed on students by others, anti-bullying, avoiding peer pressure, teenage suicide, drug and alcohol addiction, helping 8th grade students prepare for high school.

Jeff Bearden, known as “The Get Back on Your Feet Guy”, inspires today’s youth to get back on their feet, stand up to bullying, avoid peer pressure, remove the labels others place on you, battle depression, and live lives free of alcohol and drugs through his motivational speaking. As a professional wrestler for over 25 years—working under the names “Giant Warrior” and “Tiger Steele”—Bearden entertained audiences all over the world, including audiences of over 75,000. Through his wrestling career, he had experiences both positive and negative that he brings to his speeches. The topics that Bearden speaks on are those that have personally affected him and people he knew from his life on the road, providing his audience with a judgment-free and relatable message. His message is as powerful as his seven-foot stature: no matter where you are in your life and no matter what cards life has dealt you, you can get back on your feet and thrive.

Set-up for for hands free microphone system.
Elevated stage to make it easy for everyone to see.
If in a gymnasium, have students on one side.
Sound system capable to play music
One person to operate camcorder during performance.

Audio system to use hands-free microphone