Over The Rainbow
Standard 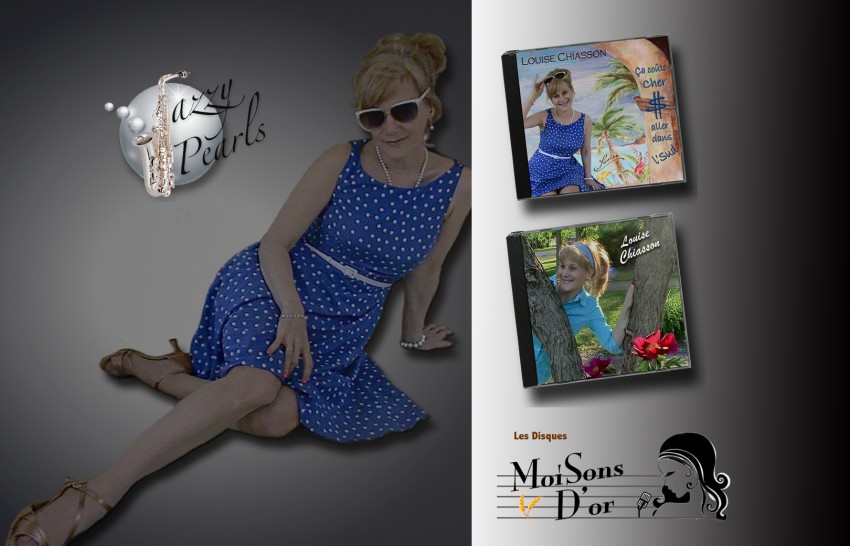 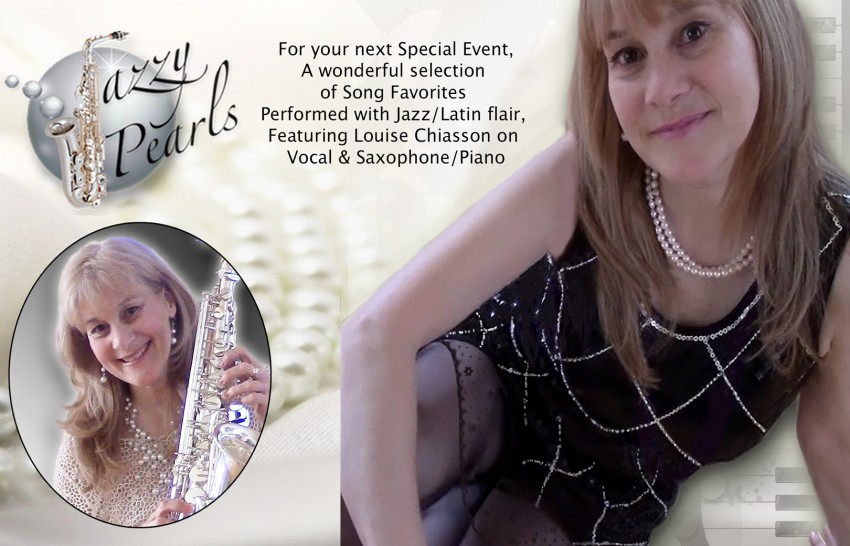 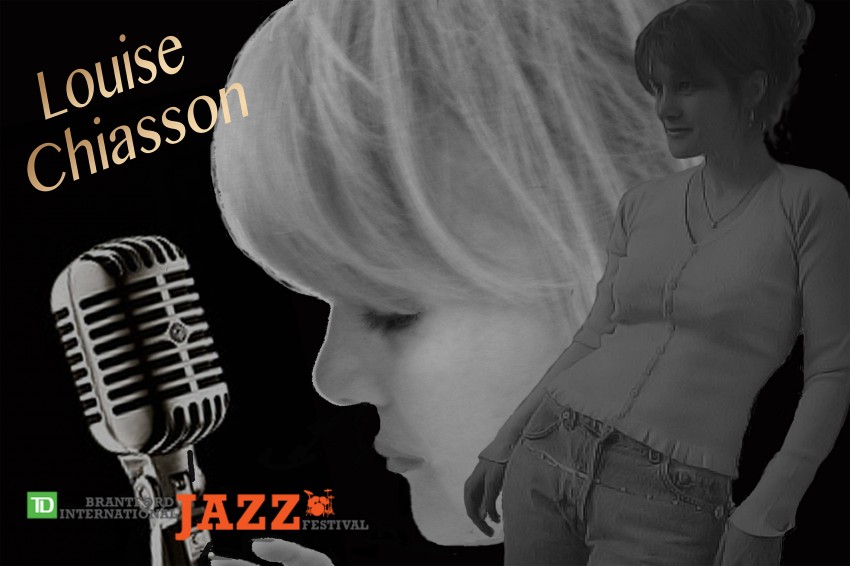 Be the first to review Jazzy Pearls

Louise Chiasson has always been ‘starry-eyed’ when it comes to The Arts. Most of her childhood was spent reaching for the moon and embracing both music and artistry while floating on the ice with the Quebec Figure Skating team. Flying from one jump to the next led her into the world of Ballet as well as the Quebec Conservatory of Music where she studied both piano and flute.

As a concert pianist and composer, Chiasson soon discovered her vocal abilities. This was a turning point for her as she started to perform as a cocktail pianist-singer in many hotels, banquet halls, casinos, lounges, dining rooms and cruise ships.

Writing original French songs soon became a passion that led to the release of her first album in the late nineties. The journey that followed resulted in a few years of professional growth before the influence of the French community within Ontario brought her back to music with a new CD release entitled: “Ça coûte cher aller dans l’sud”.

Inspired by the great singers and composers ranging from Edith Piaf to Blossom Dearie via Cole Porter and Francis Cabrel, Chiasson’s array of influences, combined with her preference for softer vocals, natural sounds, warm woodwinds, brass colors and natural melodies, demonstrates her evolution to a renewed and confident singer-songwriter.

“I am reaching for my second moon,” says Chiasson. “I think it’s important to experiment and flirt with a number of musical influences in order to find how we wish to contribute to the music industry. When I finished recording this new CD, I knew I created something I could be proud of while still keeping a glitter of room for growth.”

As a performer, Louise Chiasson charms her audiences with her charisma and commitment to lyrics as well as her sense of rhythm, musicality and gracefulness.

Born and raised in Rimouski, Quebec with strong ties to her Acadian background, Chiasson is now part of the growing Ontarian French music scene. “Quebec and New Brunswick remain flowers of my creative gardens and I’ve established some new roots in Ontario. Although I do not quite know where the wind will next scatter its seed, I do believe that I am, and will remain, a Canadian Flower forever,” jokes Chiasson.

The writing and production process for “Ça coûte cher aller dans l’sud” was a challenging journey as Chiasson wanted to put her arranging and production skills to the test. From sound engineering studies to working her way through long days and late nights, Chiasson fully committed to her studio time in order to self-produce this new release. “From there, I let my musical muse control the outcome,” says Chiasson with fond reflection.

Although Chiasson mostly sings in French, sparkles of English will surely be part of the future. “Quelques regrets sournois”, an adaption with lyrics of Glazunov’s Petit Adagio theme of “Les belles histoires des pays d’en haut”, opened a new window. “I may have a flair for adaptations as I keep hearing forgotten melodies in need of a new lyrical breeze ever since I produced this song.” says Chiasson.

Louise Chiasson will continue to explore a wide variety of musical blooms with each song and project aiming for its own mood and musical colors. “I often feel like a child waltzing between cheerfulness and a gloomy mood, leaping from one experiment to the next, spreading this paradoxical dynamic all over my creative gardens. Yet, like a colorful butterfly, I prefer to fly with a full set of wings”.

I use very compact high-end equipment, very clean, clutter free, very quick set-up for most gigs related to Jazzy Pearls. I have access to more powerful gear & lights if required but it does affect the quote, of course.

A Fine Romance
Ain't Misbehavin'
All my Loving
All of me
All or Nothing at All
All the way
Amazing Grace
An Affair To Remember
And I Love Her
Are You Lonesome Tonight
Around The World.pdf
As Time Goes By
Autumn Leaves
Baby Face
Bali Ha'i
Before The Parade Passes By
Besame Mucho
Beyond The Sea (cha cha)
Beyond The Sea (Swing)
Blueberry Hill
Blue Moon
Brazil
By The Light Of The Silvery Moon
Bye Blackbird
Can't Smile Without You
Cabaret
California Dreamin'
Can't Buy Me Love
Close To You
Come Rain Or Come Shine
Comes Love
Could I Have This Dance
Cry Me A River
Day By Day
Days Of Wine And Roses
Don't Get Around Much Anymore
Down By The River Side
Easy To Love
Edelweiss
Everytime We Say Goodbye
Feelings
Fly Me To The Moon
For Sentimental Reasons
Girl Of Ipenema
Greensleeves
Hello Dolly
How high the moon
Hymne à l'amour (Piaf - French)
How High The Moon
I Can't get Started
I Can't Give You Anything But Love
I Could Have Danced all Night
I Could write a Book
I Don't Stand A Ghost Of A Chance
I Fall To Pieces
I Just Fall In Love Again
I left my heart in San Francisco
I love Paris
I Love You
I Wish You Love (Bilingual)
I Won't Dance
I'll Be Seeing You
I'll Never Fall In Love Again
I’m Gonna Sit Right Down & Write…
I've Got You under My Skin
If I Were A Bell
In the Mood
It's De-Lovely
It’s Only a Paper Moon
Itsy Bitsy Weenie
La vie en Rose (Piaf - French)
Let It Be
Let's Call the Whole Thing Off
Let's Fall In Love
Love & Marriage
Love is a Many Splendored thing
Love is Here to Stay
Love Me Tender
Lullaby Of Birdland
Mack The Knife
Mame
Misty
Mona Lisa
Moon River
More Than You Know
More
Mrs. Robinson
My Favorite Things
My Foolish Heart
My Funny Valentine
My Guy
My Romance
Nice work if you can get it
'O Sole Mio (Italian)
On The Street Where You Live
Over The Rainbow
People Will Say we’re In Love
People
Pick Yourself Up
Raindrops Keeps Falling on my Head (French version)
Satin Doll
Save the Last Dance For Me
Sentimental Journey
Shall We Dance
Skylark
Smile
Smoke Gets In Your Eyes
So Dance Samba
Some Enchanted Evening
Something Stupid
Sophisticated Lady
Stardust
Stormy Weather
Strangers in The Night
Summertime
Sway
S’wonderful
Take the A Train
That's All
The Lady Is A Tramp
The Skaters Waltz
The Very Thought Of You
The Way We Were
The Way You Look Tonight
There will Never be Another You
These Foolish Things
They Can't Take That Away from me
Tico Tico
Unchained Melody
Unforgetable
Walking my Baby Back Home
What a Wonderful Guy
What a Wonderful World
When I Fall In Love
Yesterday
You'd Be So Nice To Come Home To
You're My Everything
Younger Than Springtime
Young at Heart

I love to sing and play a variety of music styles.I am sensitive to the golden-age of Jazz, yet a prefer it performed in a simple and accessible way. I love singers like Blossom Dearie, Jill Barber, the endless list of great ladies of Jazz...+ Cole Porter's music. You will still find popular and Island grooves (salsa/rhumba/cha cha/marengue) in my music, some country (Anne Murray/ Patsy Cline, etc.), crooners vibe (Sinatra, Elvis, Beatles, etc.) or PIAF for a french touch. - and mny more!