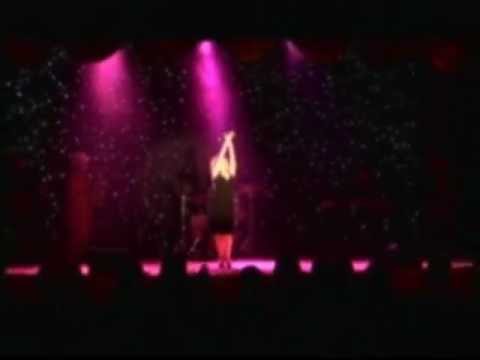 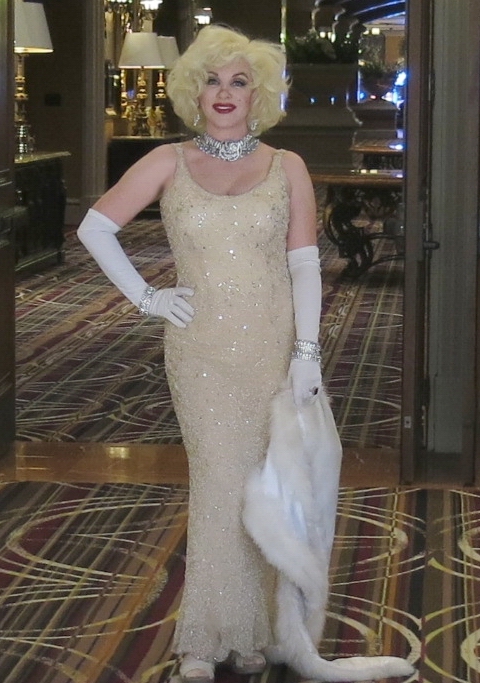 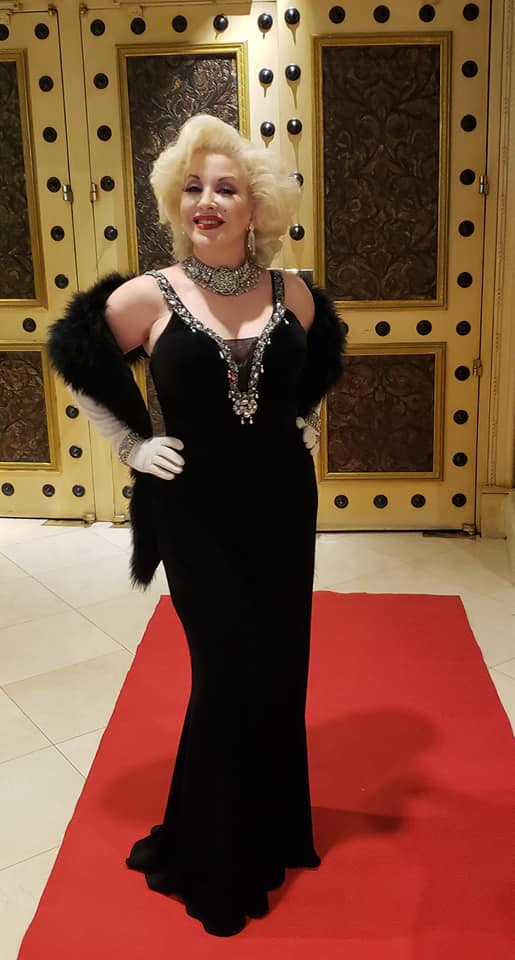 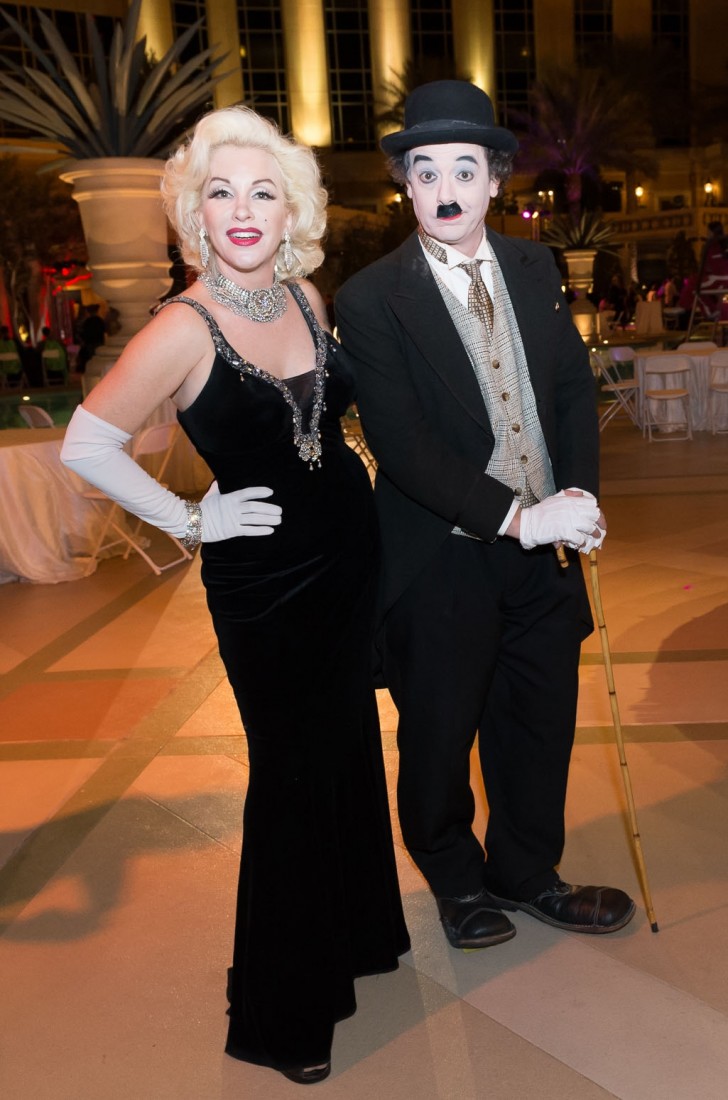 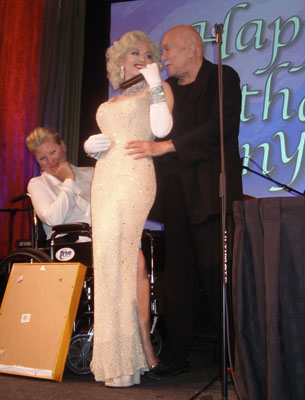 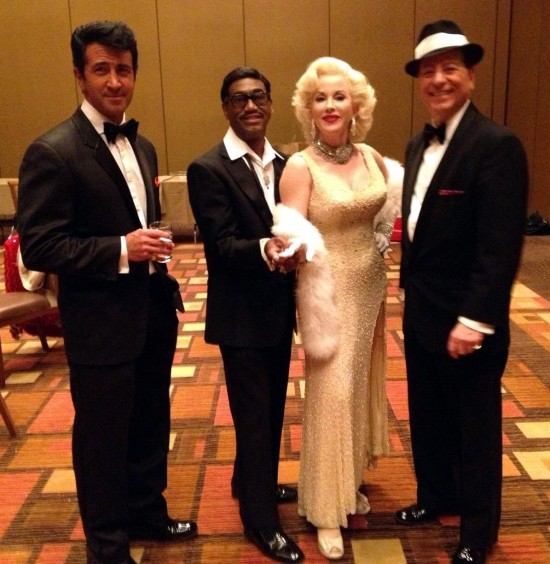 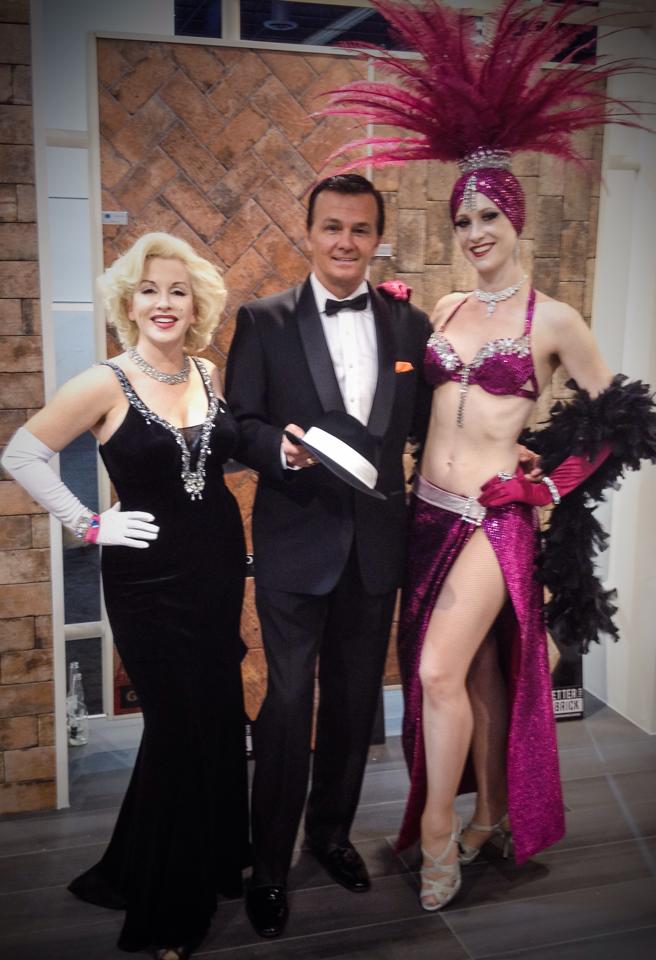 This Blonde is a TOP national Multi-Award Winning Marilyn Impersonator, Lookalike, Soundalike, and has wowed audiences on stages worldwide. Ms Valentine was the top Marilyn chosen to appear in many TV commercials and publications including NASCAR, MTV, CMT, and has performed for 1000's of Major Corporations across the USA. She has captured Marilyn's essence with her looks, voice (no lip-synch), mannerisms, moves, and costumes. Janet's show is customized for your event, and can include other A-list top lookalikes: Elvis, Rat Pack, Cher, etc. Her flawless performance is a fun, clever and loving tribute, and always a family rated show.

She made our party a fun and memorable! She was great!

Thank you so much! What a fun party! He was such a good sport :)

My company hired Janet, on more than one occasion, and she is a top notch true professional! Janet is a wonderful entertainer and I would surely hire her again!

Janet is lovely and professional... a perfect performer choice for any event. She is easy to work with and always a hit!!

Awesome Marilyn experience, Janet is so much fun!

Janet did a special appearance at my office to sing Happy Birthday for a beloved co-worker. She did so much more than just sing Happy Birthday. She was in character the whole time, she entertained the entire office, improvising and interacting throughout the entire performance. She looks like Marilyn, sounds like Marilyn and gives an unforgettable performance. LOVE Janet's Marilyn :)
(I can't remember the exact date, I just guessed, but was approximately 6 months ago.)

Thanks, Karen! He was so fun to sing to, and I like how the whole office staff came out to see the festivities! thanks, Karen! :)

We had Janet (Marilyn Monroe) help deliver the birthday cake and sing happy birthday to our father for his 80th birthday at a restaurant in Las Vegas.. She did an exceptional job, made him feel very special... She played with the entire group at the table, and everyone had a wonderful experience... I would recoment Janet to anyone looking for a Marilyn Monroe Tribute... Thank you Janet.

Thanks, Cindy! Your family was so great! Hope you all had a wonderful time in Las Vegas!! :)

NOBODY does it better!!!

Janet is the most AMAZING Marilyn impersonator one can ever hope to see!! From head to toe, her nuances, voice (speaking & singing), mannerisms, and flawless execution make Janet Valentine such an incredible performer!!! Shes #1 in my book!!!

After Wedding Celebration for a #1 Fan!

I booked Marilyn (Janet) for a private show for my best girlfriends Wedding Celebration. She's been a fan for over 30 years. She called me after Marilyn left the event and was completely taken back by the performance. She truely felt like she was able to experience "the Real Marilyn"! I might add, Janet was more than gracious, and accomadating to make this event everything a Fan would want it to be. Thank You for making a memory for life for my dearest friend. xo

Thank you for the lovely review! I was delighted to help celebrate the wedding, and always happy to meet a Marilyn fan!! She was sweet, as was the whole gang there!! :)

Seeing Janet perform as Marilyn Monroe is like seeing the REAL Marilyn. Janet is the BEST Marilyn in the business. She's a sweet lady and fantastic entertainer.

I can't begin to tell you how much we all absolutely loved your performance/show! It was all the buzz on the bus going back to the hotel and still is. Today I intend to print some of the photos and relive it all! :). You're everything I was looking for and so much more! I/we could not have been more pleased with the performance. My husband tells everyone he talks to on the phone about it and tells them what a beautiful Marilyn you were! He loved it, he absolutely loved it!

Thank you so much, Denise! It was really a fun event for your special group! So glad you loved it! --Janet

Janet :
Thank you so very much for making Lucian’s B/D celebration event such a
tremendous success !!! Speaking for myself, it far exceeded what I
anticipated … . you truly come across as Marilyn Monroe re-incarnated.
... we were fortunate you were available and willing to do it !!!
Again, thank you for such a delightful performance !!!
Bob Wheeler

Janet was fantastic as Marilyn and a tremendous asset to our event. We are a non-porfit and she was very reasonable and worked with us to make her performance happen. She is the best!

Thank you Deann! It was a pleasure to be able to work with you on your special event! What a spectacular event, and hope we can do this again sometime! thanks again, Janet

We had a corporate event that we had to organize in a very short period of time. The performer came highly recommended and she performed to perfection. We had her perform an original song and she memorized it in a short amount of time. We would definitely recommend her for your event.

Thank you, Eddie! You guys were super, too!!!

Shows can range from anything from a birthday party, to a corporate event meet and greet with photo opportunities, to a stage performance with other lookalikes (like a Rat Pack or Elvis) in a production show, and everything in-between! Janet is a wedding officiant as well! Ask for details of how Janet can make your special event more memorable for your customers, or his next birthday: The one he'll never forget!

This Blonde is a TOP National Multi-Award Winning Marilyn Impersonator, Lookalike, Soundalike, and has wowed audiences on Stages Worldwide. Janet's Show will be customized to fit your event. She has performed in many TOP rated RAT PACK and ELVIS Tribute Shows, and can provide these impersonators as well as many others for your personalized event, too.

Ms. Valentine was the Marilyn chosen to appear in many television commercials and national publications including NASCAR, MTV, Jay Leno, CMT, Travel Channel, Tennis Channel, Hong Kong TV, and has performed for 1000's of Major Corporations in venues across the USA. For over 9 years, this blonde bombshell has captured Marilyn's essence with her looks, voice (no lip-synch) and mannerisms. Ms. Valentine's flawless performance is a fun, clever and loving tribute...with audience participation, too! It is always a show that the whole family can enjoy, classy and fun!

"Thank you for being a part of our show!" -RICCI MARTIN, son of actor DEAN MARTIN, while Janet was performing onstage with him, DESI ARNAZ JR., and BEACH BOY BILLY HINCHE.

-----AWARDS----- for Janet's Impersonation of Marilyn:-
WINNER: "Marilyn Lookalike/Singalike Contest", Oakland CA . She was chosen #1 out of the five finalists from almost 30 Marilyn impersonators who participated in the contest from around the globe. These Marilyn contest don't happen very often!

WINNER: "DIRECTOR'S RISING STAR" Impersonator Awards as voted by her fellow impersonators and her agents.

NOMINATED four-times: for "Most Outstanding Impersonation of a Female Legend", Impersonator Awards as voted by her fellow impersonators and agents.