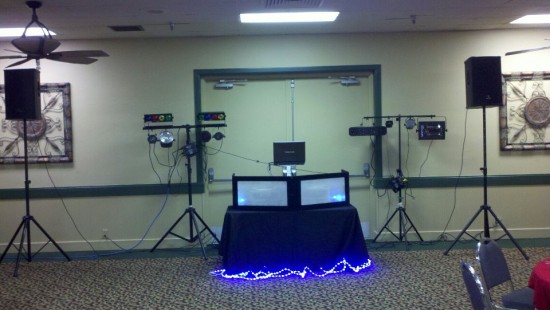 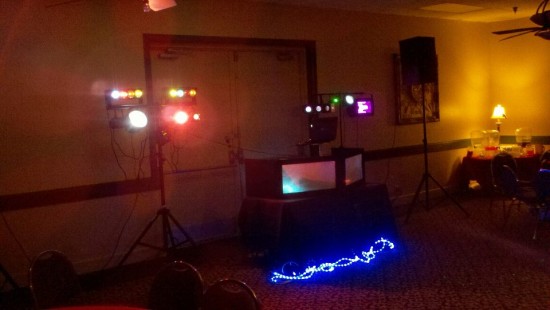 Jam Master D was the DJ for my then 14 yr old twin girls birthday party.The music was great! He had all of the newest released music as well as some of the older music at the tip of his fingers and all of it was non-explicit! The girls and their classmates had a really awesome time. My sisters and I did as well. I will definitely be using his services again.

I offer over 25 years of professional DJ services for all occasions such as:

All services can be customized to fit your needs no matter what size.
Set up and tear down is on my time, NOT YOURS!

I have a very extensive library of music and I use only top quality equipment. My resume' includes being a TOP radio mix-show DJ in the 4-states area. My main goal is to provide the best DJ service for your tailored event. When you book my services you are paying for the best in the area with TURN-TABLE & MUSIC MIXING SKILLS to keep your event going the entire time. I aim to make your event that your guests will never forget. Your entertainment is the key to your event success.

*Top-rated in all age groups*

Jam-Master-D (JMD) has over 25 years of experience "Rockin' the House" and keeping the parties live and crunk!! He is a native of Texarkana, TX and has always loved music. Since he was a small boy he has had a large collection of music from 8-tracks, to cassettes & records, and now CD's & Mp3's. In 1985 he moved to Irving, TX to attend DeVry Institute to pursue his degree in Business and Computer Science. While there, his friends would go out to the local hotspots but JMD would stay in to record mixes from the local radio station, K-104 featuring Dr. Rock and other DJ's. Soon after, he moved back to Texarkana and was asked by a relative to DJ a company party since he had a huge collection of music. Starting out, he used a Fisher Home Stereo System with a 1-belt driven turntable and 2 cassette decks and mixed it up all night long. THE REST IS HISTORY!

Later, JMD got a gig running the board on a talk radio station, KTFS and made one of the smartest investments a serious DJ could make; he purchased a set of Technic 1200 turntables. In the beginning, he started to mix & record cassettes after listening to mix-tapes from K-104 FM in Dallas, TX. He has never had a DJ to personally show him how to mix or had any formal training. He learned his craft just from listening and learning how to do it on his own and he got very good at doing it. People all over town would want him to create them a mix-tape with their favorite jams and that is what he did. He is a crowd pleaser and people love and respect him for what he does. JMD has done a variety of gigs from private parties to the club scene. A perfect opportunity came along when former NFL football star Billy Sims opened a nightclub in Texarkana. The club had a regular DJ but would let JMD do a few sets on weekends. He later got the spot as the main DJ in the club and for years, from club to club, JMD was known for "Rockin' the House".

In 1993, being known for doing his thing in the club, JMD was hired at a new local radio station, KZRB 103.5 FM doing his very own mix-show. Later, he started full-time DJ’ing overnight and then moved to afternoons and currently to evening/nights. JMD was the first DJ to have a mix-show AND host it at the same time in the Texarkana area. He also became the Music Director while on the air at the station from 1993-1998. Later on, he was recruited by another new urban station, 101.7 FM out of Hope, AR [home of one of our greatest Presidents, Bill Clinton]. That station later changed its format before giving it a chance to flourish and he unfortunately resigned. Next, he got a gig at K-TOY, an urban AC radio station where he did the Friday Night Party Mix. In between time he would DJ parties in the community and also would DJ events and shows for the local artists. He also upgraded his equipment during this time. In Feb. 2006 he was called back to the only urban station in town where he currently does his mix-show today, KZRB 103.5 live.

JMD prefer to use vinyl records but since so many people download music illegally on the Internet, the record companies has been forced to cut back. He still uses his turntables but for the most part he has converted over to using CD turntables. He feels that "if you want to call yourself a real DJ, then you should at least know how to mix”. There are other DJ's and DJ companies that claim to be the best in the area but they have no skills to keep the party going with non-stop music like JMD. He knows how to read the crowd and adjust to what the clients want. JMD has been DJ'ing for over 25 years and will continue to do so as long as he can.

I use Pro Sound and Lighting Equipment

Variety made to fit Event