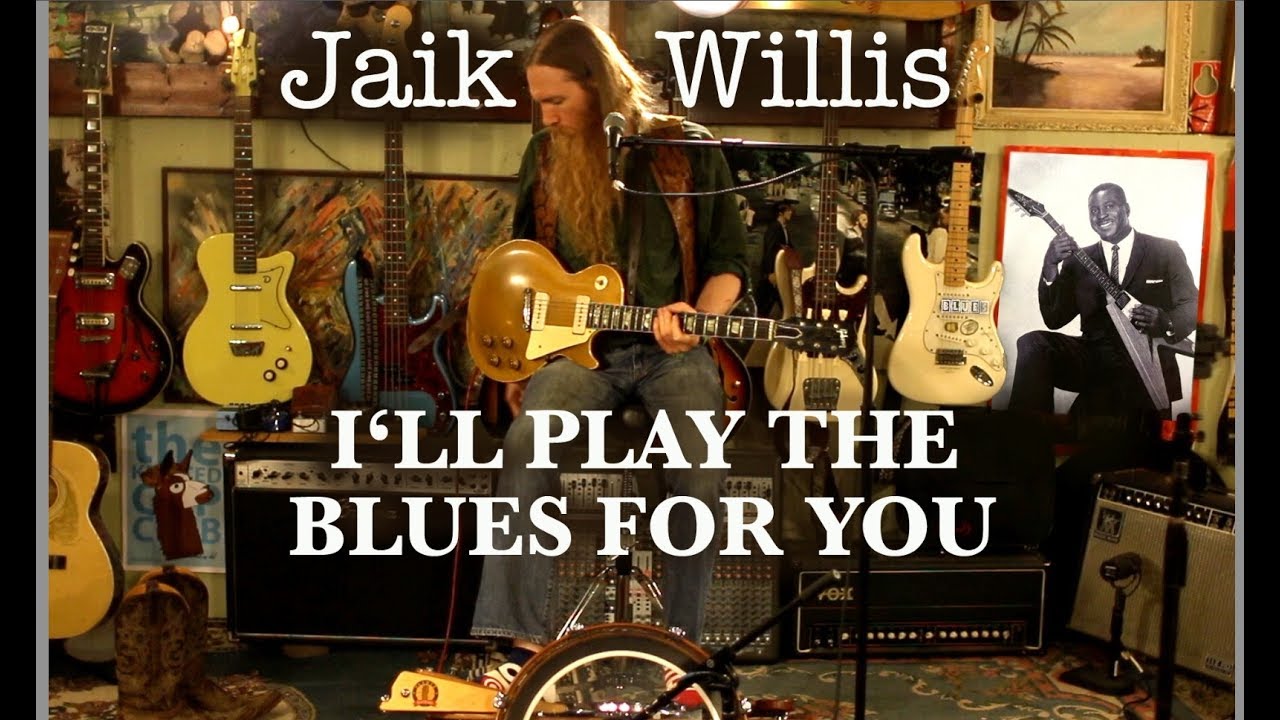 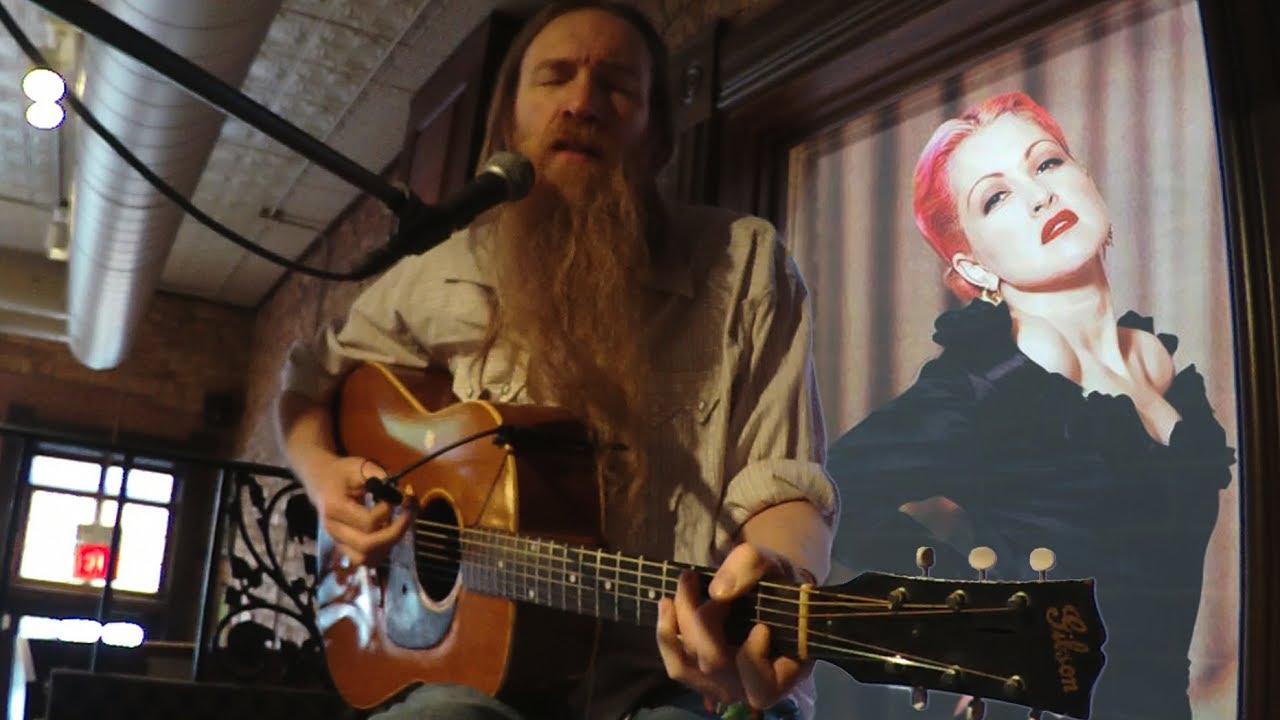 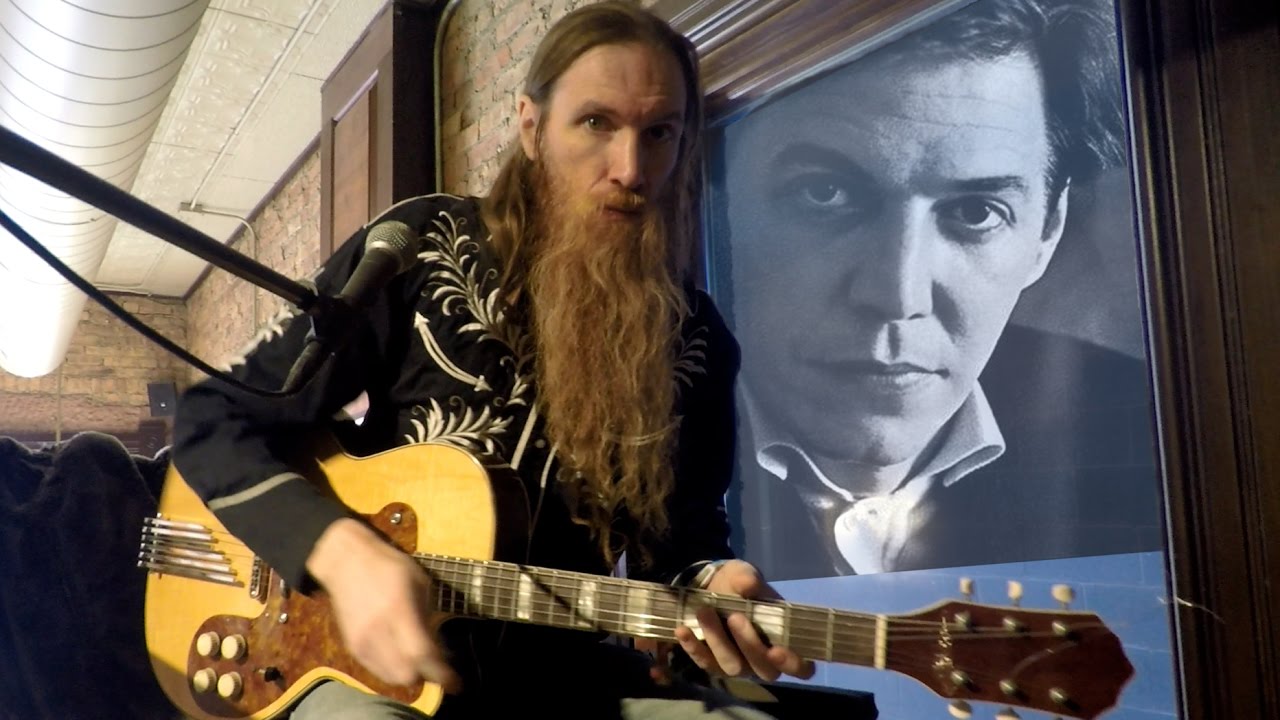 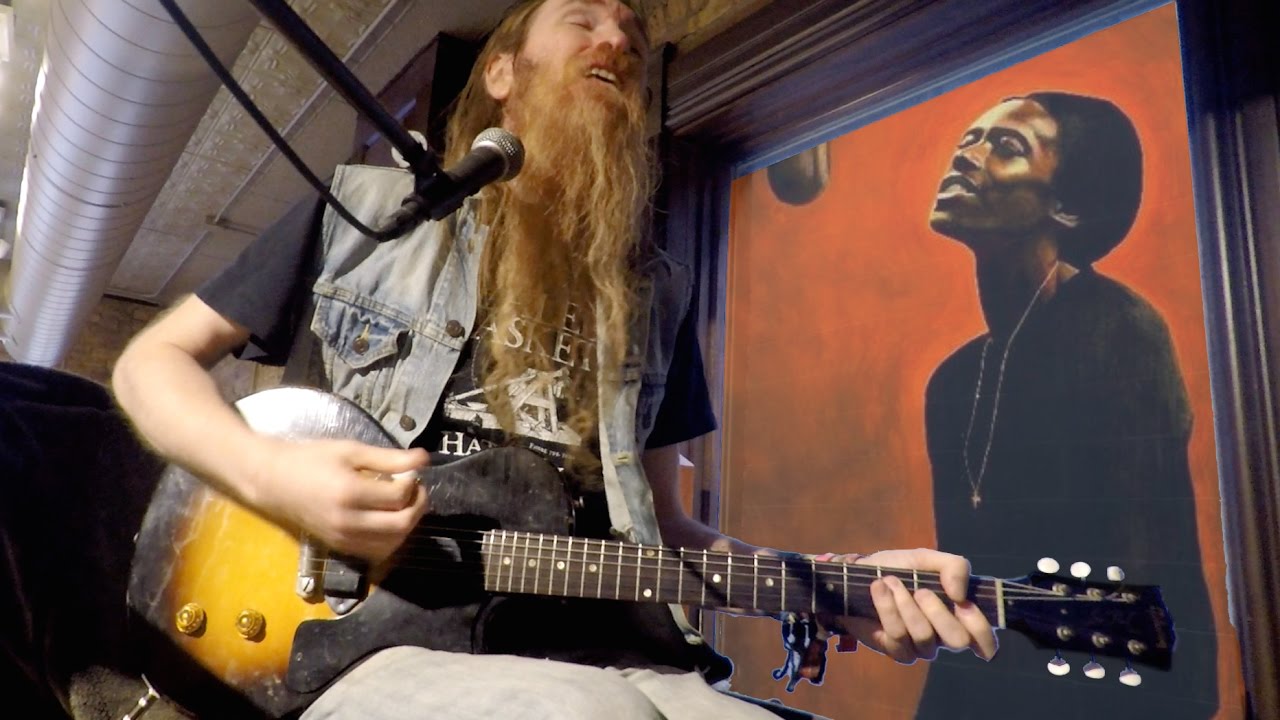 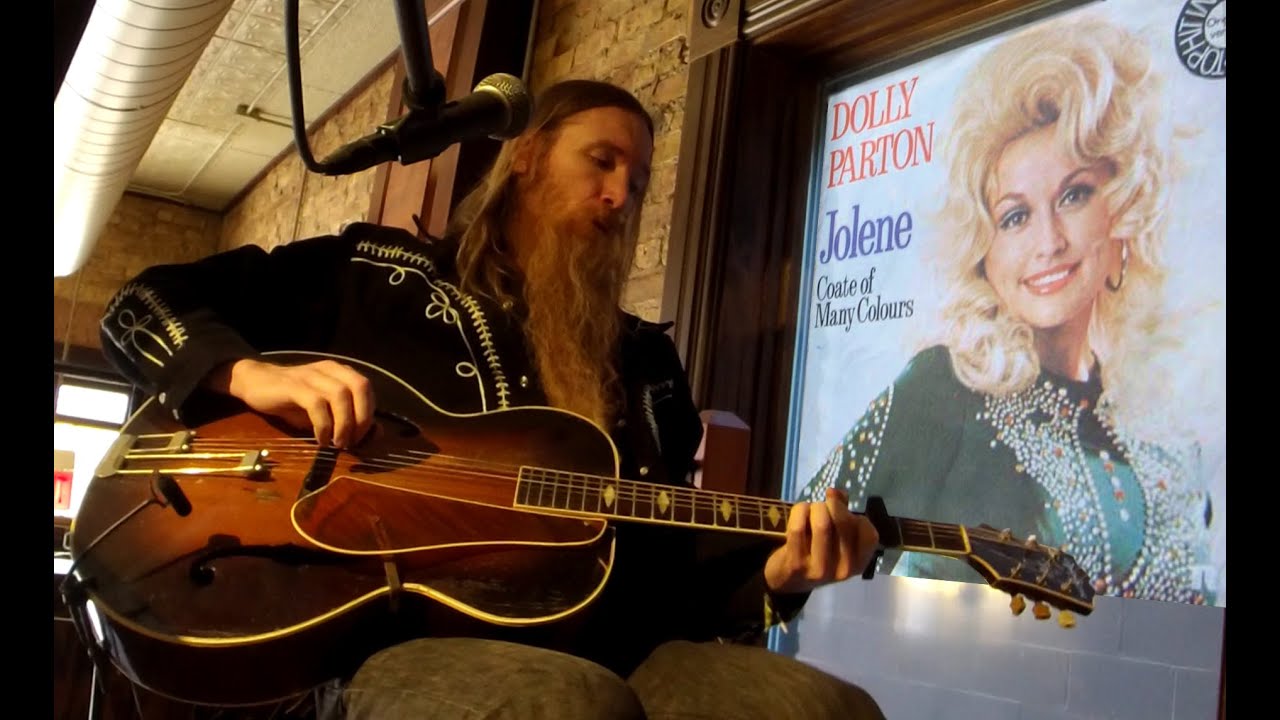 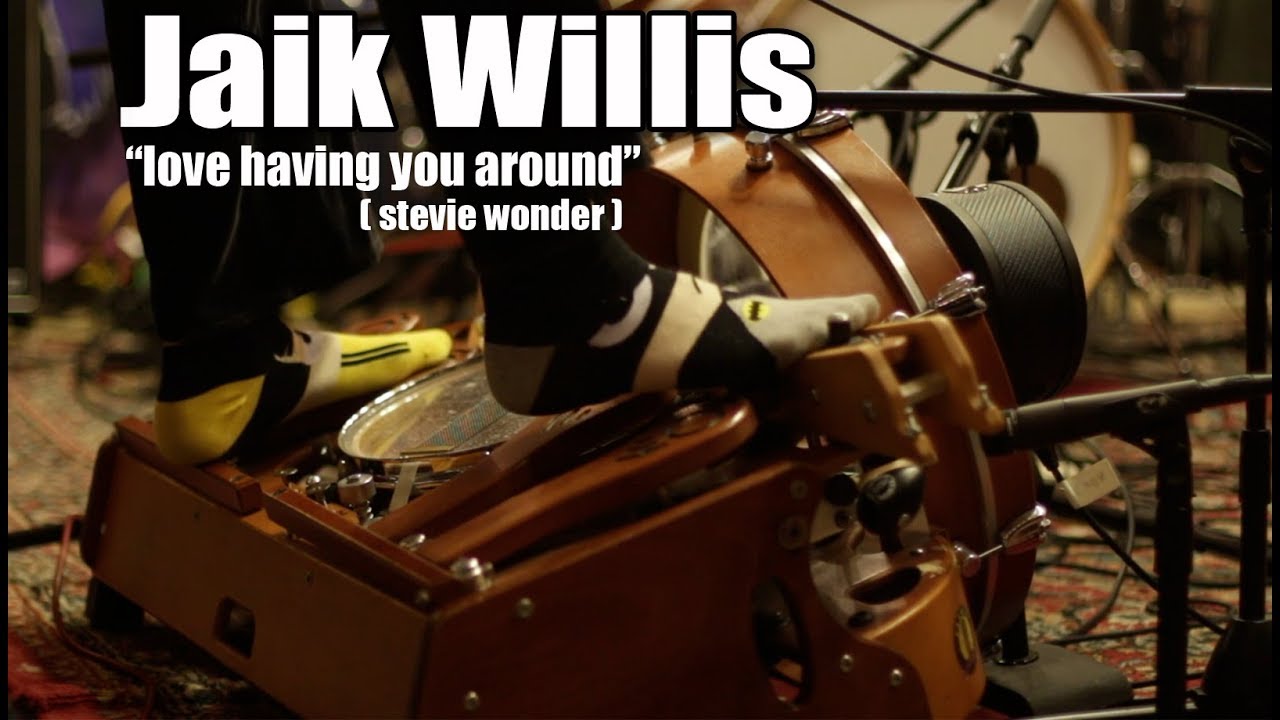 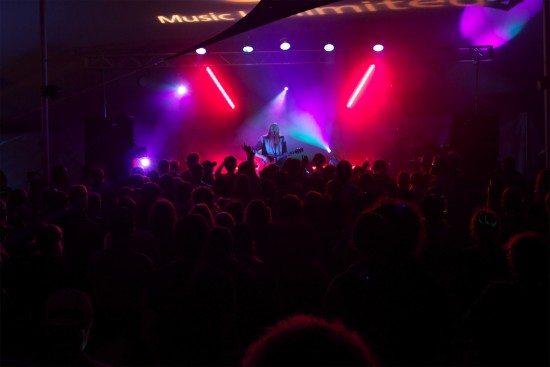 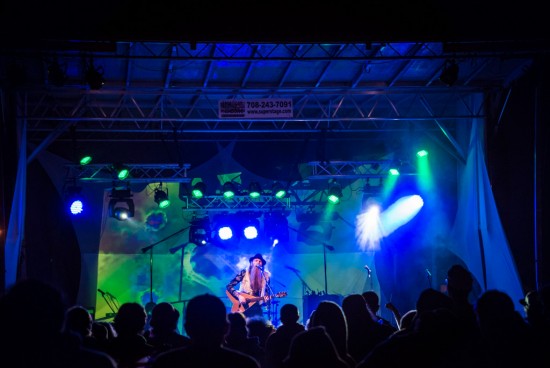 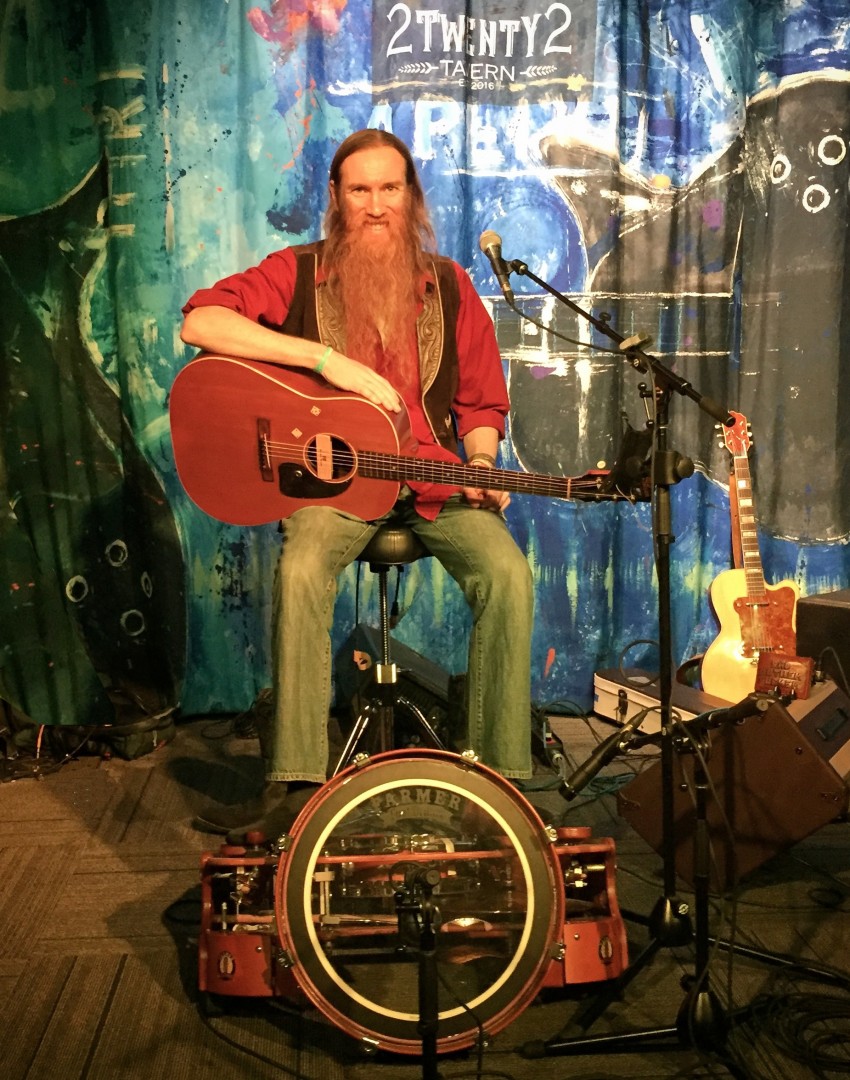 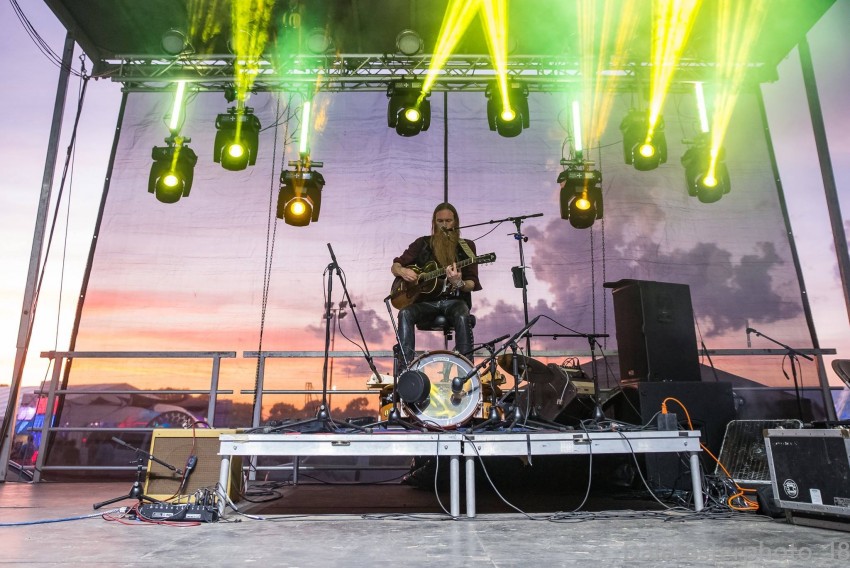 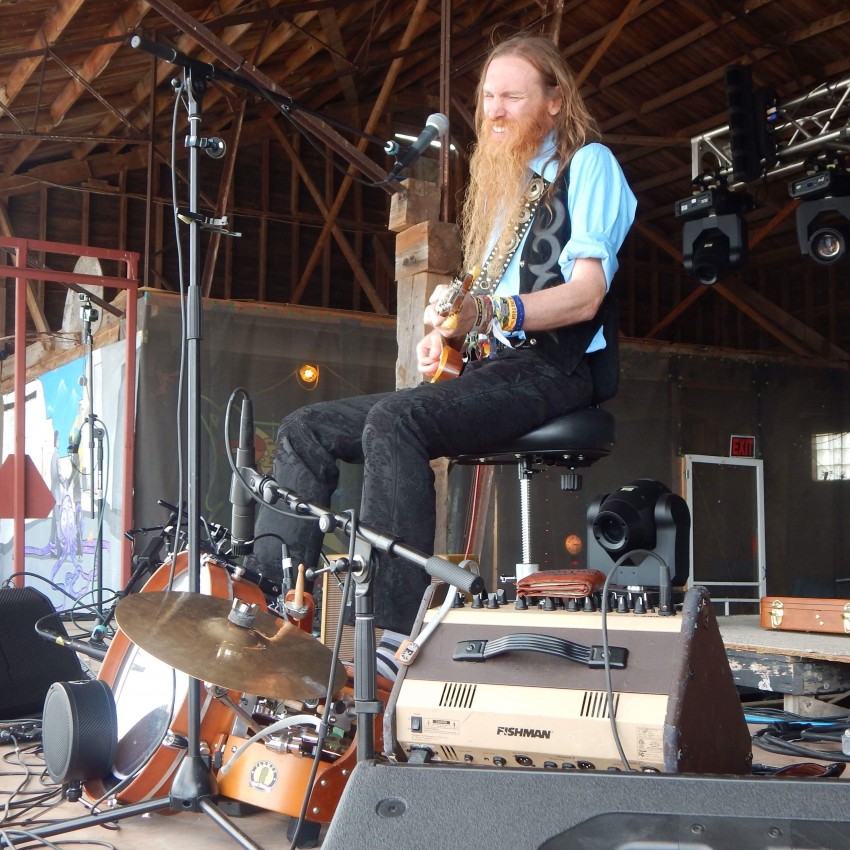 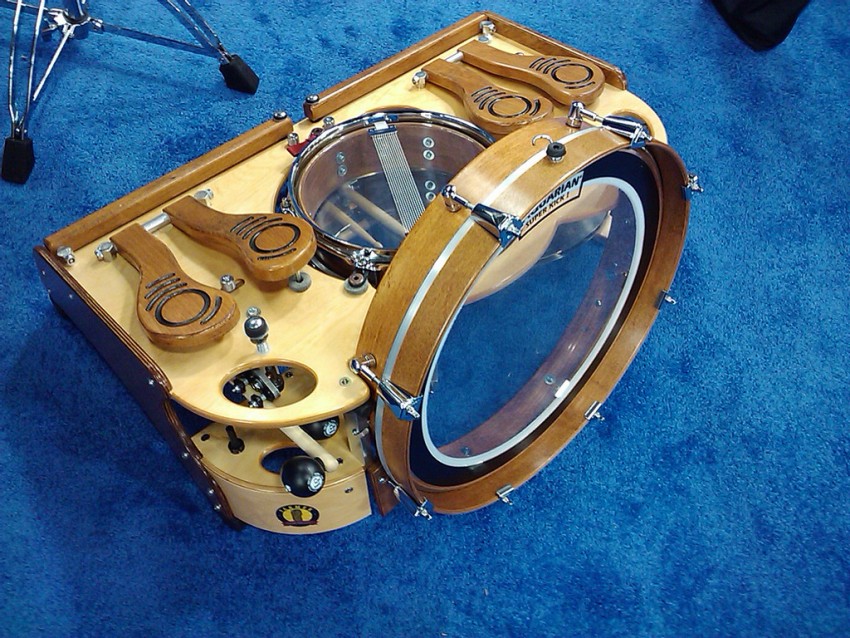 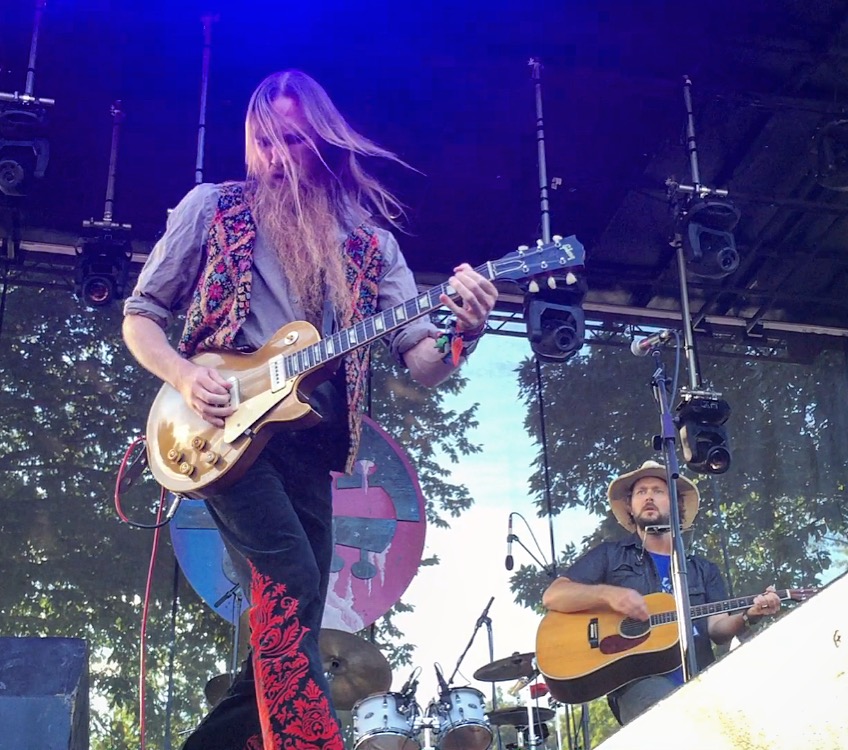 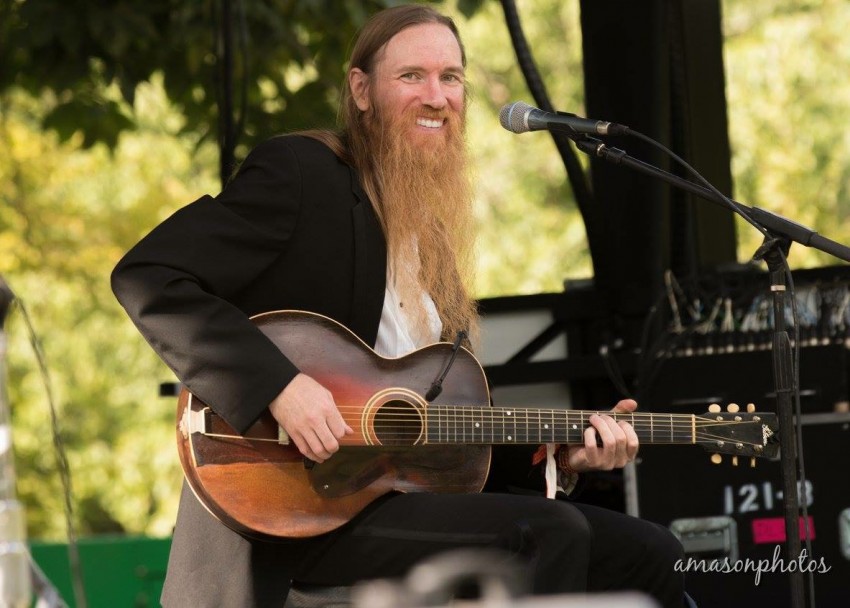 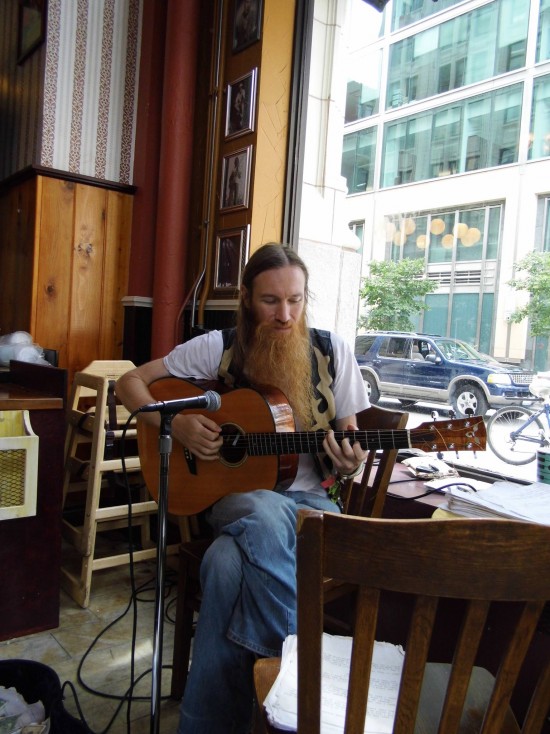 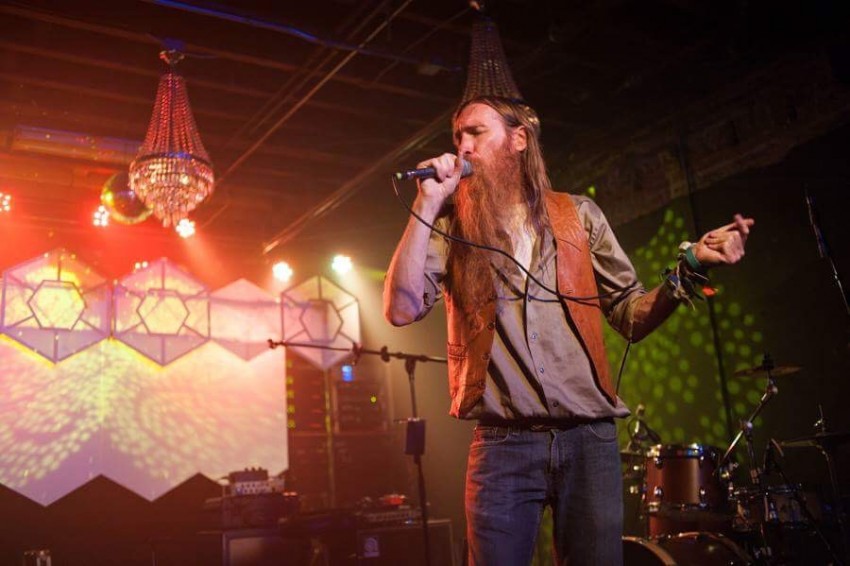 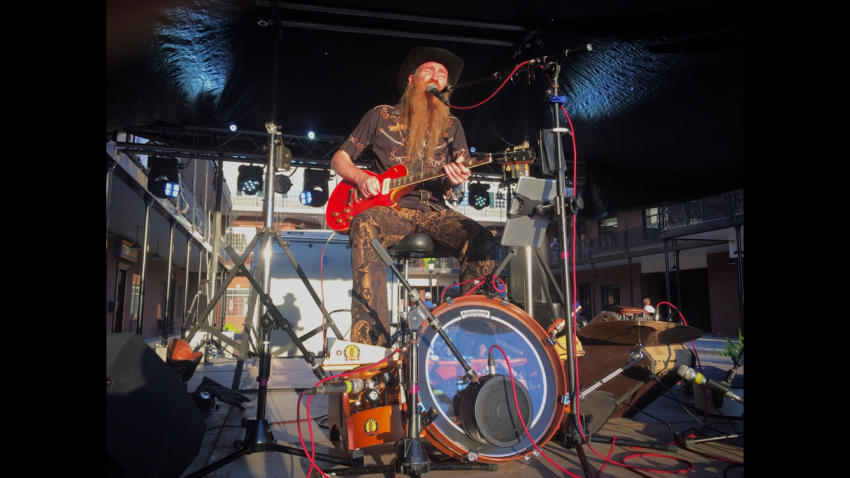 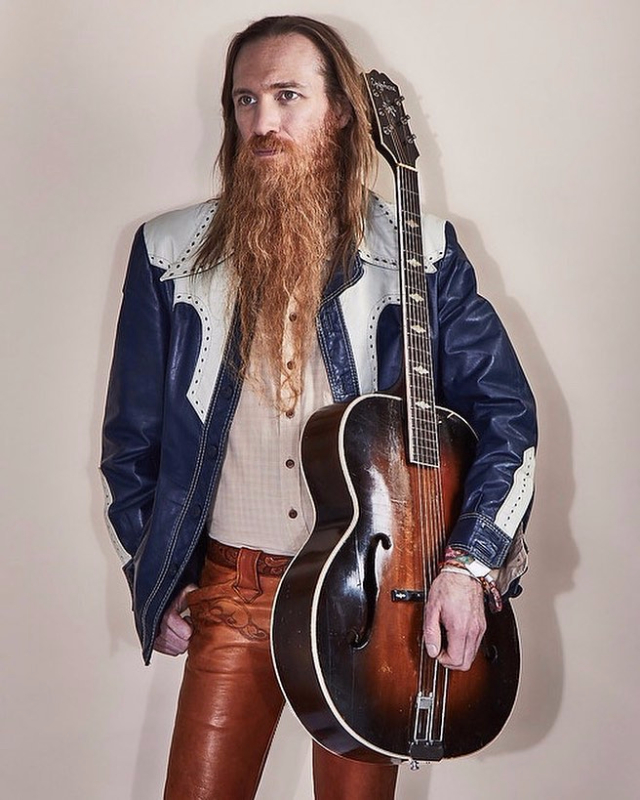 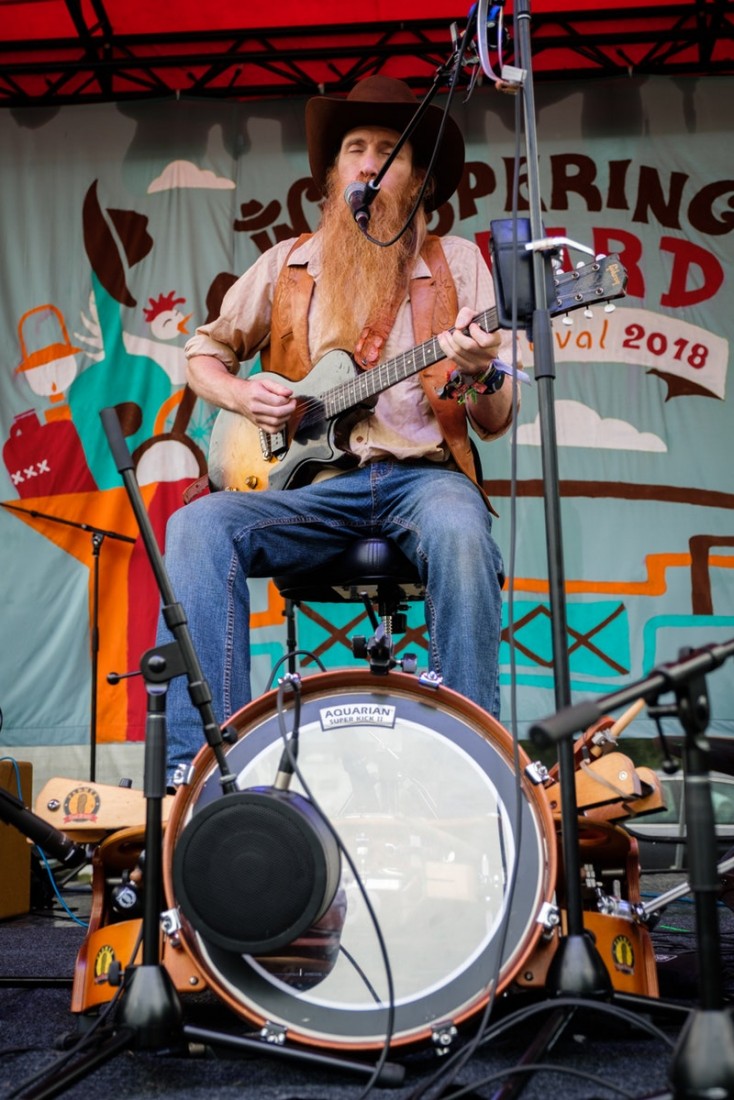 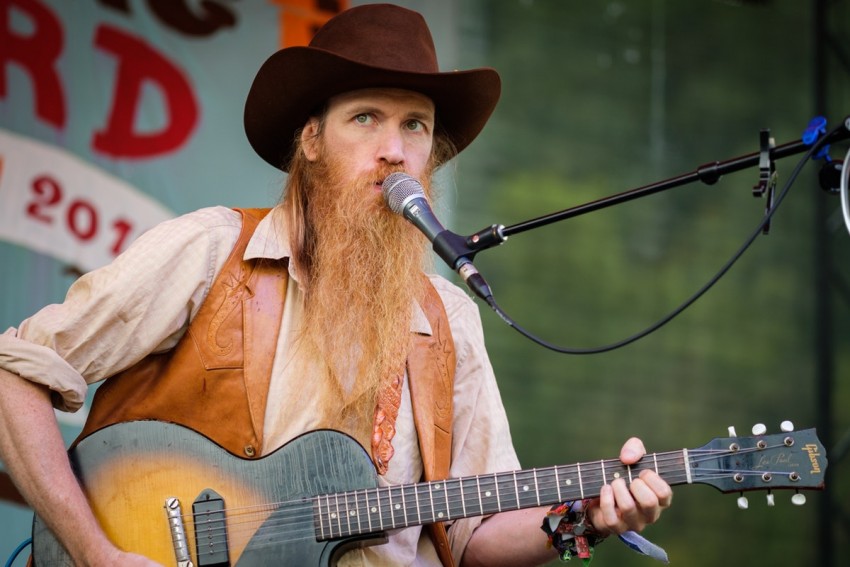 Jaik Willis is a nationally touring performer based in Chicago, executing 300+ shows per year. He has a repertoire of literally thousands of songs in wildly varying genres from Folk to R&B to Metal to Jazz to Classic Rock to Blues to A Capella Beat-Box & beyond, whatever the situation calls for.
He can play drumset with his feet while playing guitar & harmonica while singing & beatboxing simultaneously.
He has shared bills with artists such as Willie Nelson, Snoop Dogg, Wilco, Bela Fleck, MMW, Del McCoury, NIN, Big Brother & the Holding Company. Jaik Willis got a shout out in Rolling Stone magazine for his vocal contribution to the Bassnectar album “FreeStyle” that debuted at #1 on iTunes

Amazing player and great to work with!

Jaik's authentic approach to music brought a lot to our event at McCormick Place. He was great to work with and even greater to listen to.

Jaik was great to work with Very talented

This was the second year in a row that I hired Jake for our 4th of July parade. He was great and the people loved his music. Perfect choices for a day celebrating America!

When can he come back!?

Jaik was amazing! Fun, kind, and an amazing musician! We can’t wait to have Jaik again!

Thanks Jaik for a great night of music

Jail was amazing!! My customers loved the vibe he brought to our shop and it definitely provided a unique shopping experience for my guests! Def will be hiring for next year 💪

Hired Jaik to perform at my husband's outdoor 50th bday party and it was just what we needed. We are big music people and have been missing live music and Jaik was a real treat! All our guests loved him as well. He is a very talented and gracious artist definitely do not hesitate to hire him!

Jaik was great. Amazing talent perfect for our backyard party. Everyone enjoyed the music and have already asked when we are having him back.

So easy to work with and a wonderful musician

Jaik performed at my dad's memorial. He was so professional and played the most beautiful rendition of our requested song. So grateful.

Jaik is an extremely talented, hard working performer. He played a 3 hour set of solid songs that were exactly right for our event (outdoor happy hour at our cafe). We look forward to having him return.

Absolutely amazing, The party starts when this guy begins, he really knows his stuff,It’s amazing how many instruments He put on stage . Stage was located in the middle of nowhere he never complained.Don’t even hesitate, he’s the best. You better get him before you can’t afford them anymore!

Fantastic performance for a backyard party

Jaik played my backyard for a small group last week. All of my guests loved seeing and hearing his talent! He played a wide variety of songs and seemed to have one ready for every single thing that happened (rainbow outside—how about “Somewhere Over the Rainbow?”; police show up—how about the theme from Cops?). Highly recommend Jaik for his versatility and musicianship.

Jack, was everything we expected and more....arrived on time, music selection was great, engaged our guests and he was as professional as he could be. We could not be more pleased with his services and hope to have him back!

We have had Jaik play in our barn venue several times. He is one of the most talented musicians out there. Each show is different as he can adapt to any crowd and can create the party atmosphere you want. His wide range of musical talents are unique and refined. I guarantee you will not be disappointed in his performance.

Fantastic musician! Prompt, professional, he made the process very easy. Highly recommended for any event that someone wants a very versatile and talented artist.

Hired as:
Guitarist, One Man Band

It was a pleasure working with Jaik. Everyone loved him and had a great time. Jaik made the whole process very easy.

Hired as:
Multi-Instrumentalist, One Man Band

Jaik was unquestionably the hit of our parade. He was prompt and understood the right tone to take with his playlist and just made the whole thing effortless.

I Had Jaik perform in my backyard for a small intimate party. He was very professional and personable and the music was wonderful. I can't wait until my next gathering.

Jaik was amazing. Very talented. We had him come out for a townhouse courtyard event (socially distant!) this past weekend, and to say he was well-received is an understatement. Would definitely recommend him and hopefully have him out again!

We invited Jaik to come and play at our wedding after watching his videos online. It was fantastic! We had a small backyard wedding and he was able to play all our favorite songs that we had picked from his repertoire. All the guests loved his singing style and song selections.

We had Jaik perform at a corporate reception and the feedback we got from our team and all the guests was phenomenal! He is a fantastic entertainer and we will certainly book him again the next time we are in Chicago!!!

On time, great performance and attitude.

Would definitely use him again, and would highly recommend him.

Need someone who can shred a harmonica? Jaik's your man.
This was for a studio session, and he was able to record parts within his own studio and send me the tracks. The timeline he communicated was spot on, and the tracks were of the highest quality.

I'll be using him again.

Jaik is the Real Deal!

He was even suffering with laryngitis, let me know the day before and even set up a back up just in case. We decided to just have him play regardless without singing. He showed up, sang as much as possible and made the event memorable.

I will be definitely using him again for my next event.

We had a great time. He played great music and had great vibes!!!

Hired as:
Singer/Songwriter, One Man Band

JAIK WILLIS IS THE MAN

I have a very wide skill set and I'm perfectly happy to adapt to whatever setting is appropriate. On the one hand I can create a very engaging show playing drumset with my feet and guitar with my hands, while singing and beatboxing at the same time as a very active & entertaining One Man Band ; but I am also just as happy to lay back and play gentle background music when that is what is called for.
I have thousands of songs in my repertoire covering any genre or era you could want.
I also have all of the Sound Equipment necessary for most settings, and can provide that when needed.

Jaik Willis is a wildly unique One Man Band ; playing an 11 piece drum set with his feet while singing, playing guitar, harmonica, and beatboxing all simultaneously without any electronic trickery. He has 1000s of songs in his repertoire covering an incredibly wide range of genres and eras. Playing 300 shows a year with appearances at Bonnaroo, Summer Camp Music Fest, Dunegrass, the Chicago Bluegrass & Blues Fests etc; Jaik Willis got a shout out in Rolling Stone magazine for his vocal contribution to the latest Bassnectar album “FreeStyle” that debuted at #1 on iTunes.

Jaik Willis is a nationally touring independent performer based in Chicago, executing in the vicinity of 300 shows per year. He has shared bills with artists such as Willie Nelson, Snoop Dogg, Wilco, Bela Fleck, MMW, Del McCoury, NIN, Big Brother & the Holding Company, Leftover Salmon, Justin Townes Earle, Digital Underground, Blueground Undergrass, Garaj Mahal, EOTO,The Schwag, Ekoostik Hookah, Tea Leaf Green, Split Lip Rayfield, and performed on stage with acoustic blues dynamo, Corey Harris, and Chicago blues legend Billy Branch as well. He has performed at innumerable festivals and major venues around the US including Bonnaroo in TN, Summer Camp Music Fest in IL, Chicago Bluegrass & Blues Fest, Schwagstock in MO, Dunegrass in MI, Terrapin Hill Music Fest in KY, Wuhnurth/Stable Studios in IN, Michigan Peace Festival, Tall Tree Lake Music Fest, and dozens of others per season.
Jaik has moved well over 15,000 CDs by hand with no outside assistance. His song “Leaving Vancouver” was featured on the front page of the Chicago Sun Times website accompanying an article and a 2 page photograph in the paper itself. Chicago Tribune ran a feature article on him in their Arts section. His song Checks & Balances was featured on Neil Young's website for over a year. He recently recorded with Stephen Perkins of Jane's Addiction, Rob Wasserman of Ratdog, Willie Waldman, & DeVante Swing of Jodeci.
His 4-octave voice stretches out in vocal solos, scatting and beatboxing; over his high-energy acoustic guitar work on original songs that are accessible and lyrically intriguing. The focus is on keeping the show fun for the audience.
Jaik trained at Berklee College of Music in Boston, Illinois and California State Universities' music departments, and in Hollywood's Musician's Institute as their youngest student when he was 16 years-old. He spent all of his teen-age years practicing 10-16 hours per day. After studying jazz and Euro-classical music, Jaik received an ethno-musicology/ anthropology degree with a thesis on microtonal guitar music from Mauritania. He is always seeking performance opportunities and new avenues forward for his music.

"Whether playing progressive folk music on his acoustic guitar, beat boxing while singing at the same time, shredding an electric guitar for a jazz project or yodeling for Bassnectar, Jaik Willis always has tricks up his sleeve and the ability to impress in so many ways." -J-man (MusicMarauders: News, Reviews & More)


"The standout set of the day was Jaik Willis. As a one man band, this guy’s energy alone is astonishing. He doesn’t just sing, he belts his lyrics out, all while hammering on his guitar, dancing around, and stomping his feet as if the energy of his music is just flowing out of every end.” – (Soundfuse Magazine)

"Jaik is a hardcore troubadour somewhere in between Steve Earle and Nusrat Fateh Ali Khan. He has wandered around the USA like a modern minstrel, surfing sofas, car camping, and paying dues to sing the blues. It is a high energy solo show featuring Jaik's horn-like voice darting around a blistering broken-string approach to his acoustic flying V guitar, with original songs that are accessible, and message driven" - (Chicago Jams)

“He has a most unique soaring falsetto and a wild eyes rolled in the back of his head fierce guitar style. He writes original songs, including a fantastic song about Freedom (the gas station). Jaik's sound is somewhere between Anti-Folk and The Band and it is unlike anything I've heard from anyone else. His energy is fierce, his vocal range is inhuman, his beard is long. You've gotta check this guy out.”- ( Independent Music Center )

I can adapt to any situation.

Aside from original material where appropriate or Human Beatbox performances, I also have thousands upon thousands of cover songs in my repertoire, literally weeks of material.

I can adapt to any situation