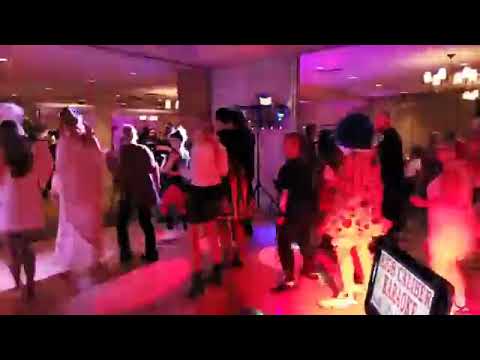 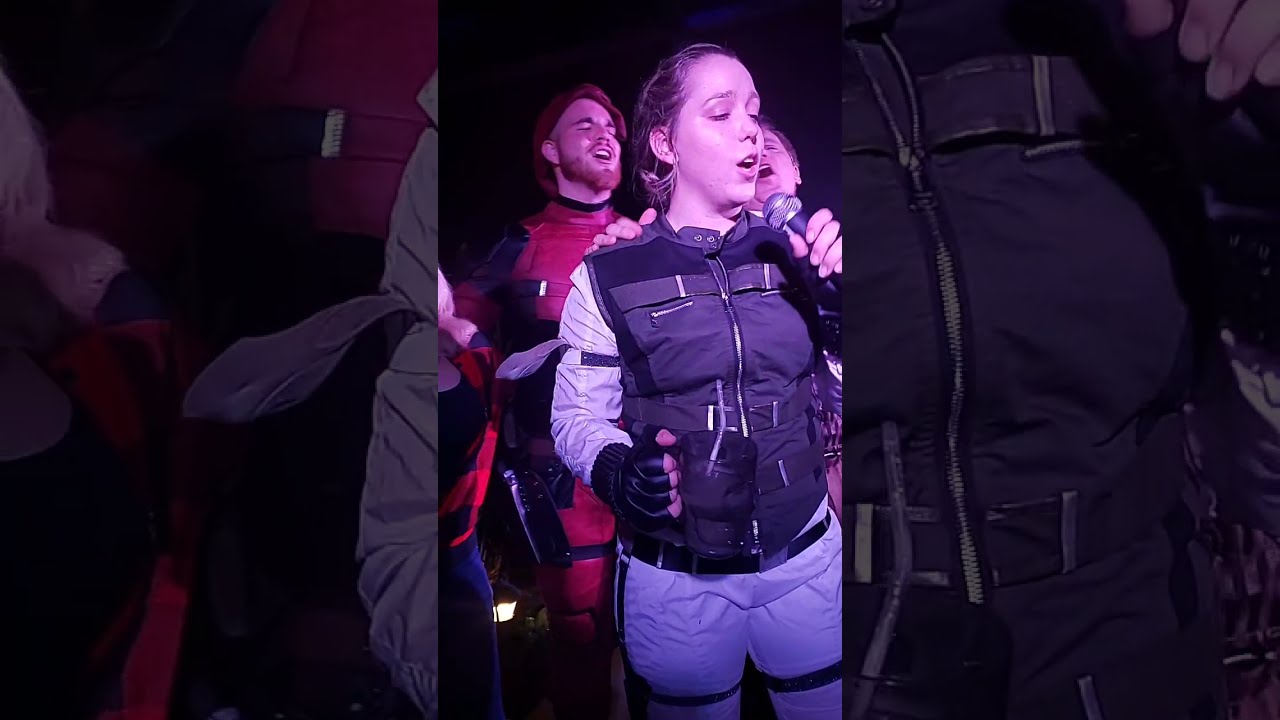 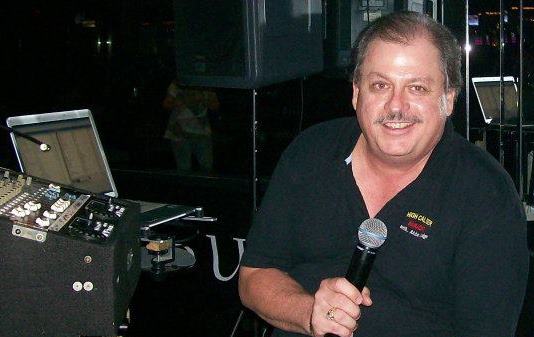 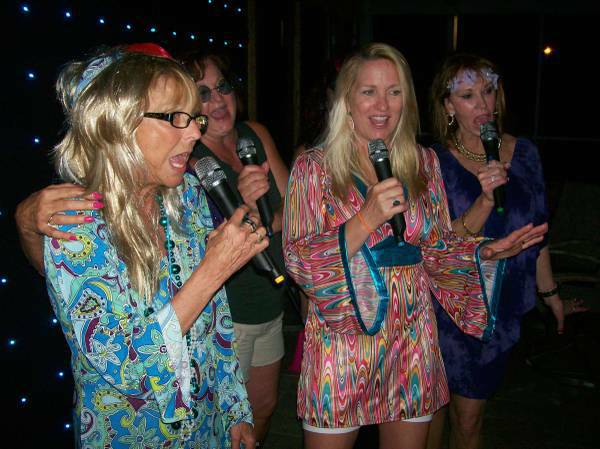 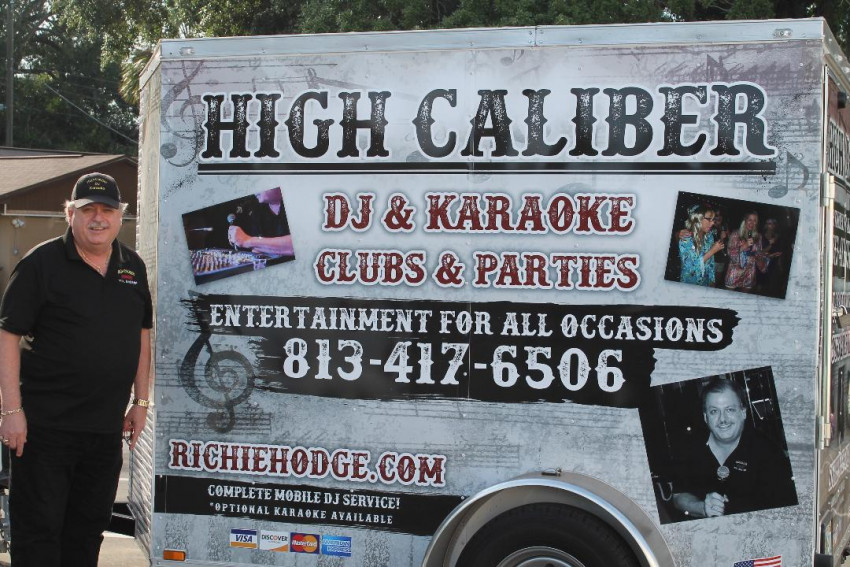 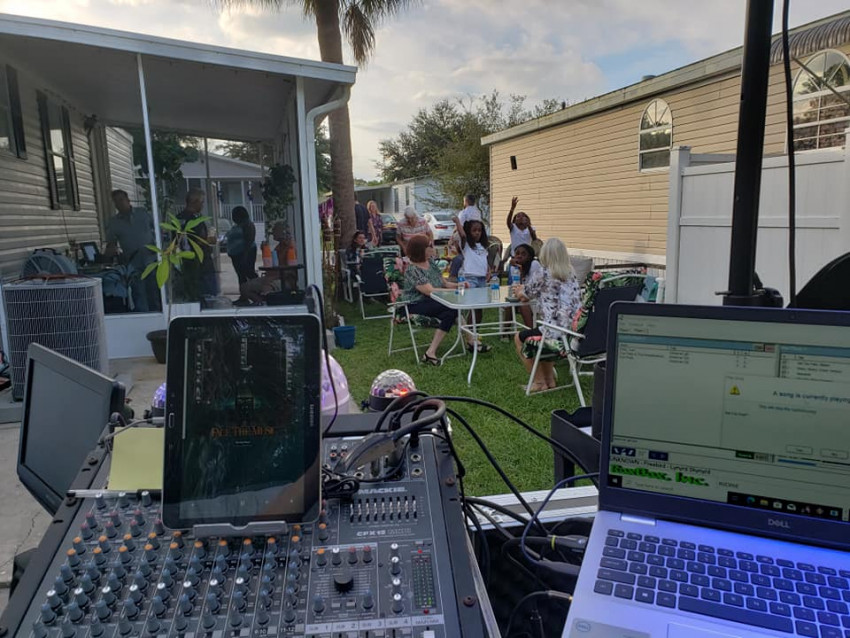 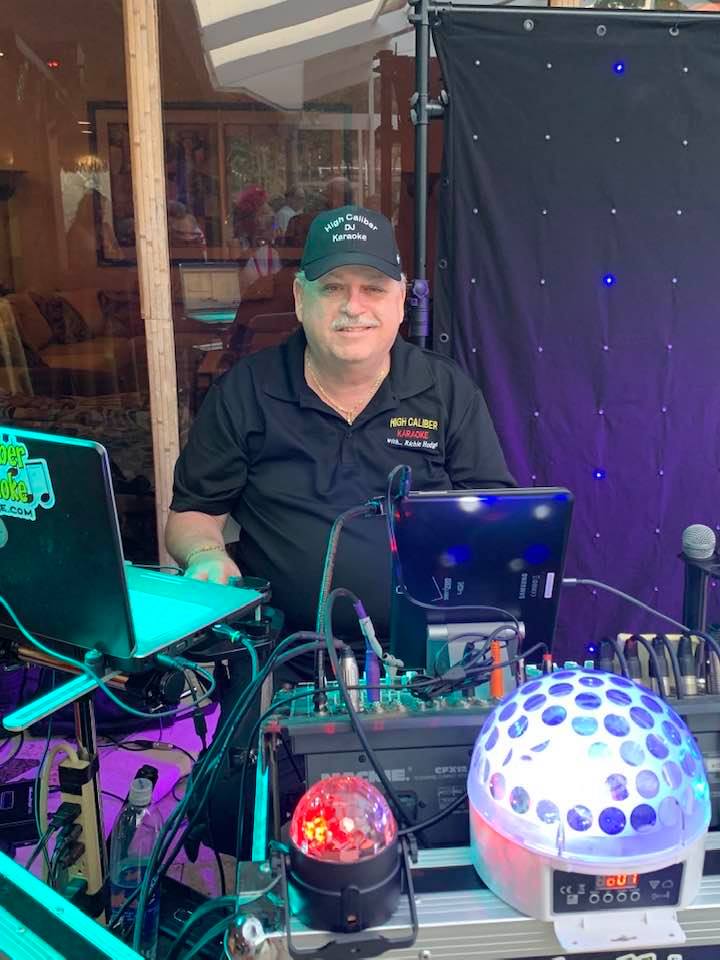 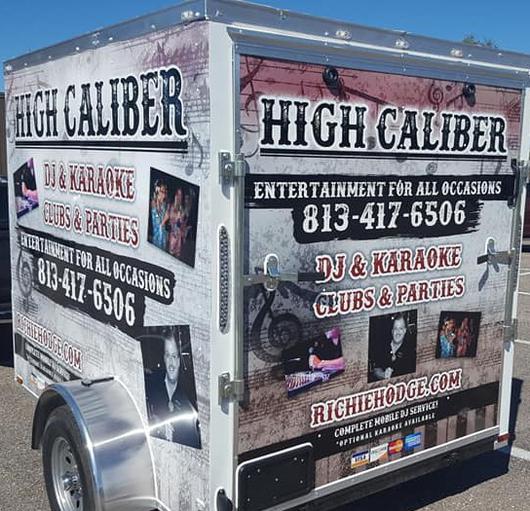 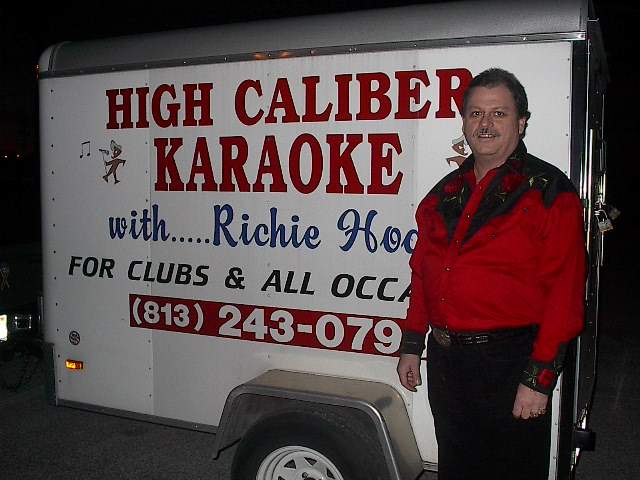 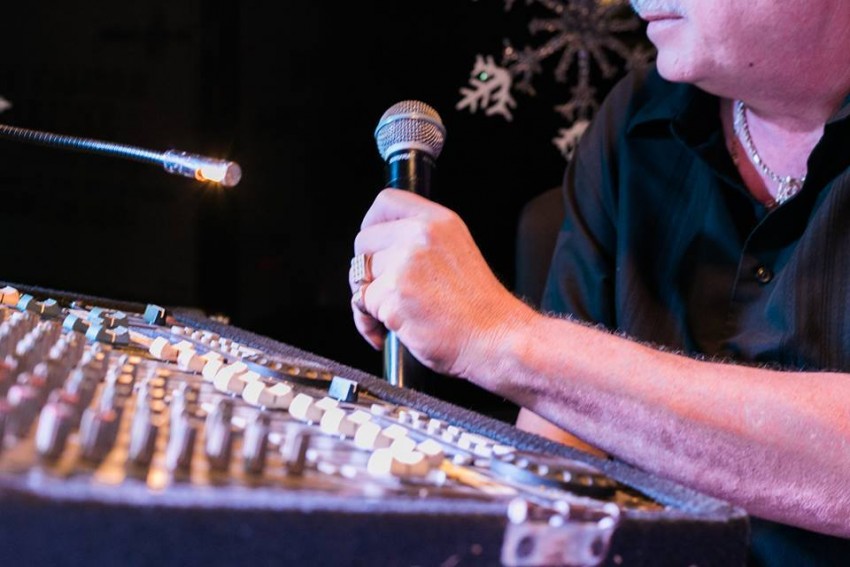 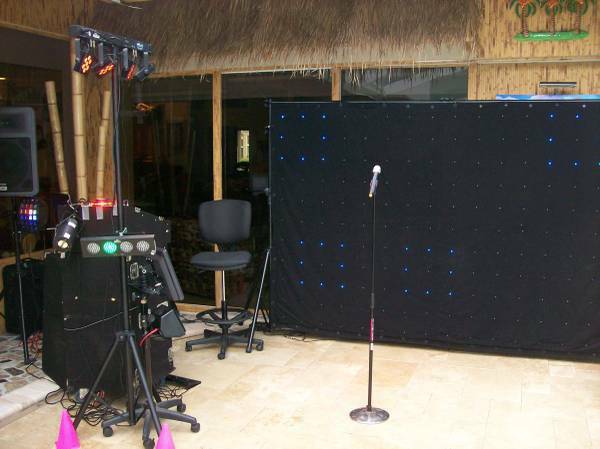 Professional DJ & Karaoke services available for all occasions or events in the Tampa Bay and surrounding areas up to 100 mile radius. I can DJ alone or also add in karaoke at no extra charge. I have been a musician/entertainer/singer all of my adult life and have been a DJ hosting karaoke full time since 2002. I have done hundreds of events and everyone has always been very pleased with my service.
I have an all pro PA system, Up to 5 wireless mics for group singers, announcements, toasts, or speeches. I use dazzling stage & dance floor lighting to make things look good. I have a huge song library both DJ music & karaoke songs that are updated monthly. I look forward to hearing from you.

Richie is THE man! He was perfect, professional and fun! He shows up early and has more and better equipment than any other entertainer of his kind that I have ever hired and that is saying something because I have hired many. He knows how to read the crowd for the perfect DJ tracks when no one is singing and then seamlessly suggests the perfect Karaoke tracks. His track library is limitless. Exceeds expectations in every way.

Thanks very much Janet, what a fun party and you are the perfect host! I look forward to working with you on future events as we discussed. Take Care!

Richie helped us out at the last minute when another vendor fell through, and we couldn't be more grateful. He was quick to respond, and very easy to work with! He provided Christmas music for our outdoor event, and everything ran perfectly. We look forward to working with him again.

Thanks Lauren,
Glad I could be of assistance, You were also a pleasure to work with.
Hope we can work together again in the future.
Happy Holidays!

High Caliber DJ and Karaoke did an awesome job for my mom‘s 75th birthday party. We had all age ranges there and everyone had a great time and enjoyed the ambience. We had initially just been looking for a DJ. But when we got a quote, High Caliber DJ offered to include karaoke and that sealed the deal. The nice surprise was that karaoke really added a fun element to the event. He was very receptive to all of our suggestions and was able to pull things up on the spot. He also worked with us to find a way to use his sound system to add our zoom video call for guests to join remotelyat one point during the party. We highly recommend High Caliber DJ!

Great light show and lots of songs and karaoke

Richie did a great job for us and was even able to stay over past the scheduled time for us. He had all the tunes we requested as well.

Thanks very much Laura, I think Bob had a Happy Birthday!

A True Professional. Richie Made the Party!

Richie was absolutely fantastic. He has a unique ability to read the crowd and give them the music that fits just right at any moment. The Karaoke side of things was perfect. He had people that had never sang before up and singing as if they were the greatest singers in the world! (I think we created at least a few monsters ;))

Thank you Richie for a great event. Can't wait to book you again.

Richie was amazing from start to finish. He worked with the state park to ensure he was in compliance for the event, even when he was asked for so much. I'm thankful for his willingness to make his customer's happy. He also showed up super early for the event and provided music as we were setting up. Our guests loved him and his music.

I'm more of a laid-back DJ, I don't do the scratch style & beat juggling like the kids do these days. However, I hate "dead air" and will keep it moving. If doing karaoke I can break the ice and sing myself and help novice singers or sing harmony if requested.
I use a laptop with external hard drive. I have a HUGE song library, (both regular music & karaoke tracks) that are updated monthly. I also carry a tablet so in the unlikely event that I get a request and not have it my vast library, I can instantly get it online so I can play virtually ANY song requested. I have a complete all pro PA system using Mackie SRM-1650 1600-watt powered speakers. I also have Mackie SRM-1850 1600-watt powered subwoofers for added bottom end (if needed). I use up to 4 racks of dazzling stage & special effect lighting to make things look good.
I can do straight DJ services alone or also include karaoke at no additional cost. My rate is reasonable & negotiable, I accept all major credit cards. I try to stay booked 2-3 months in advance so the longer you wait to book me, the less likely I'm available. Contact me NOW so we can talk it over. You won't be disappointed!

My name is Richie Hodge, I have a very rich musical heritage, my father, Bobby Hodge was a featured singer on the Grand Ole Opry in the early 60's. He debuted the same night as Loretta Lynn. So, I have been brought up in a musical environment all my life. I've been a musician/entertainer all of my adult life. I started out playing bass guitar with my father's band on weekends back in 1978. Since that time, I have performed with numerous bands at countless clubs & venues. I have had the opportunity to work with bands who opened for major acts such as Steve Wariner, Johnny Paycheck, Kitty Wells, Charly McClain, David Frizzell, Lynyrd Skynyrd, David Lee Roth, Daryl Singletary, Mark Collie, and others. I have also performed with national acts such as Nashville Recording Artist Melba Montgomery, RFD Television's Penny Gilley from the Penny Gilley Show, Reba's youngest sister Susie McEntire and also Dennis Lee who tours the US and Canada performing at major fairs and festivals.
My parents owned several night clubs in the bay area over the years. Namely, The Longhorn Saloon in Tampa. It was there that my father bought a karaoke system where I would host karaoke nights. This went on for several years and the shows were always a popular event at the club. This is when I learned the craft of being a DJ and hosting karaoke while also performing as a musician. I have since invested in much more equipment and a substantial library of songs. I am somewhat new to Gigsalad but not new to DJing and hosting karaoke. I have done 100s of parties & events of all kinds. I have the experience to help make your event a success! Give me a call and let's talk it over!

I have a massive song library of music of all styles. Provide me a list of favorite songs before your event so I can make sure I have all your favorites ready to play!

some kind of cover if outside