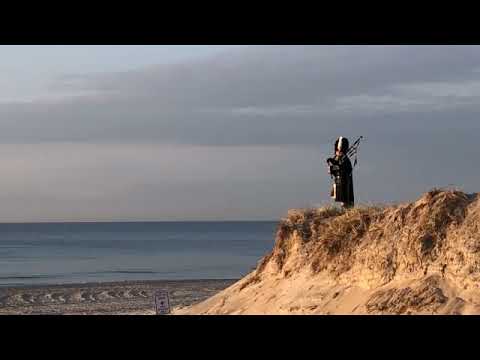 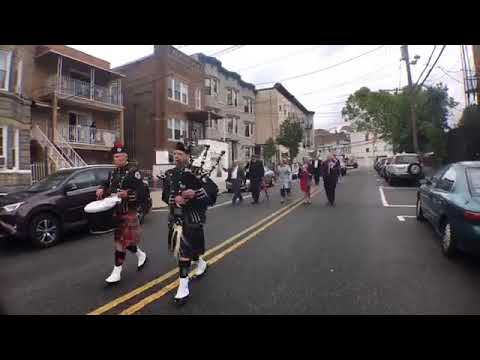 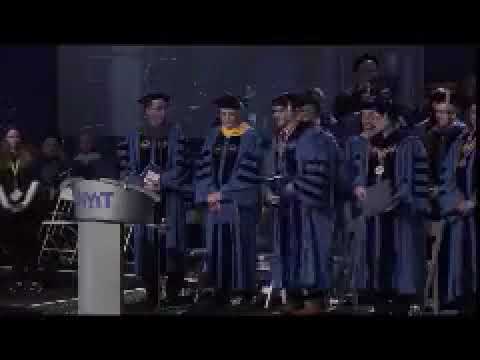 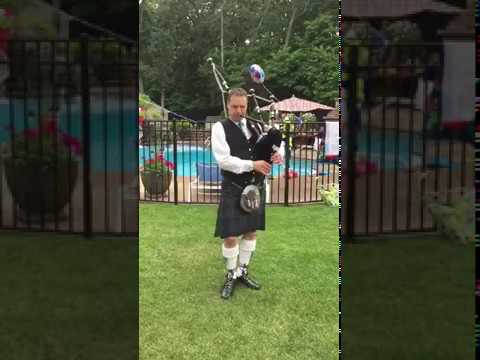 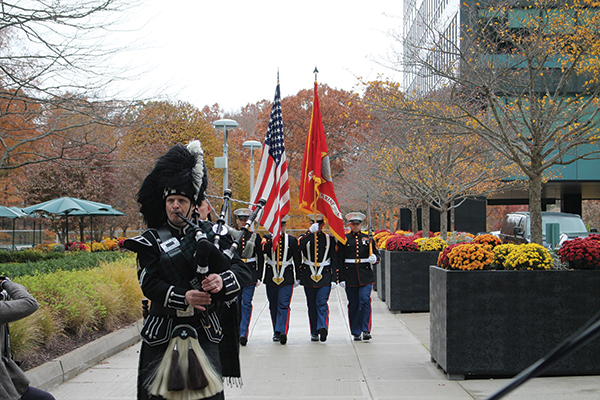 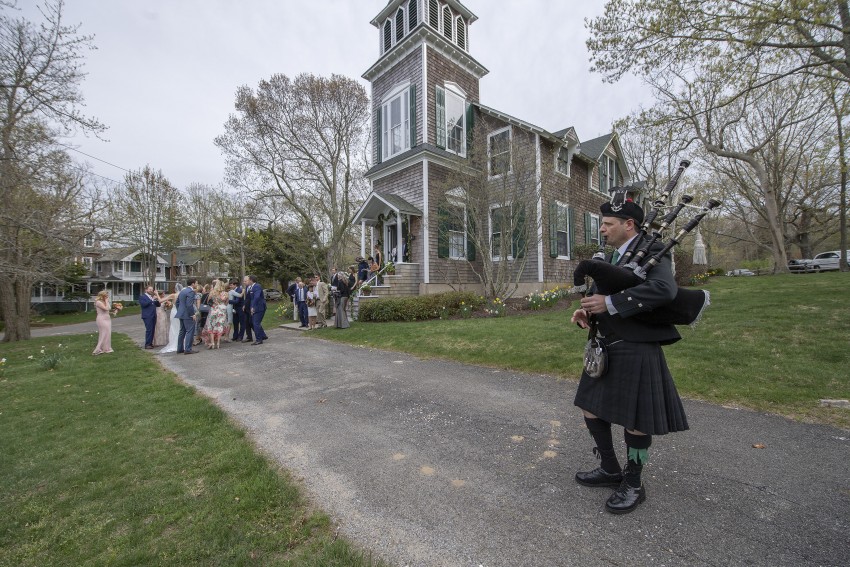 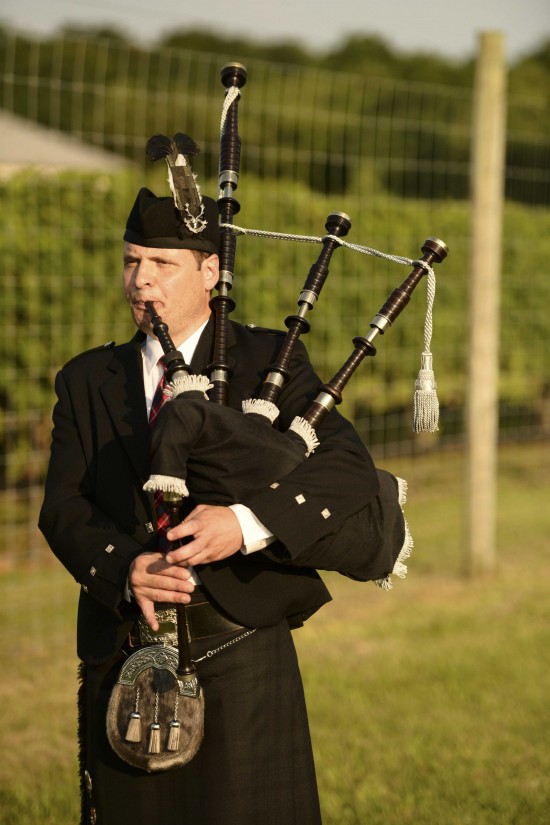 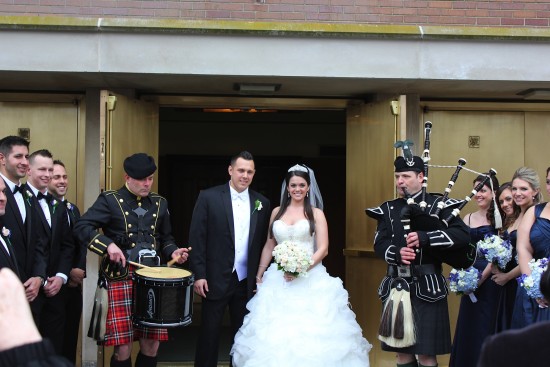 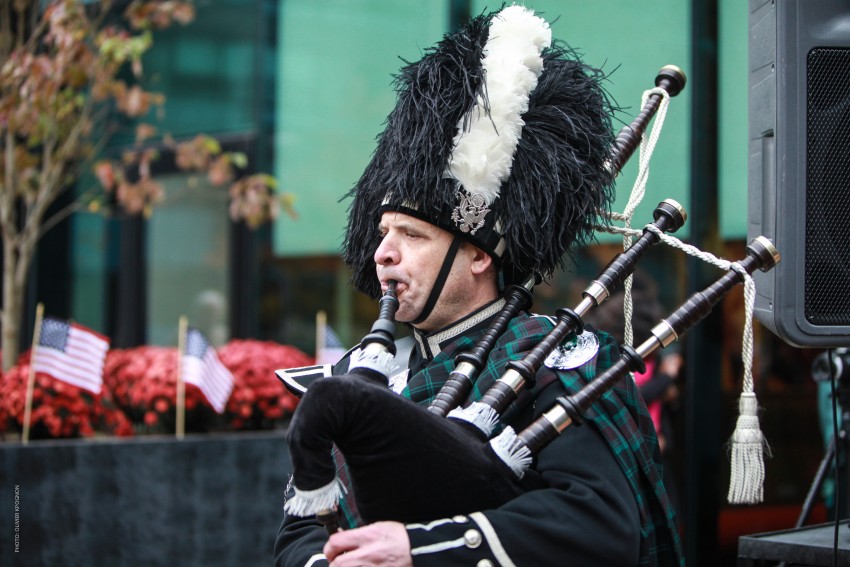 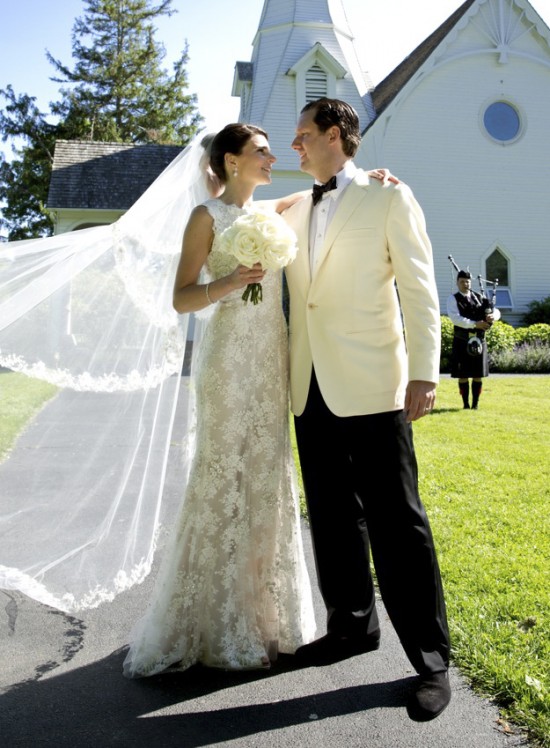 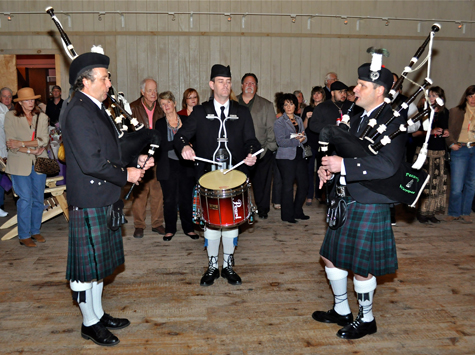 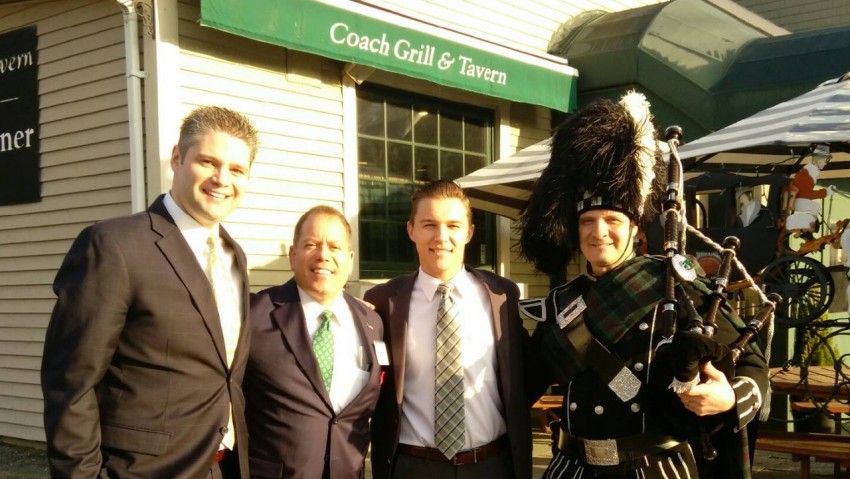 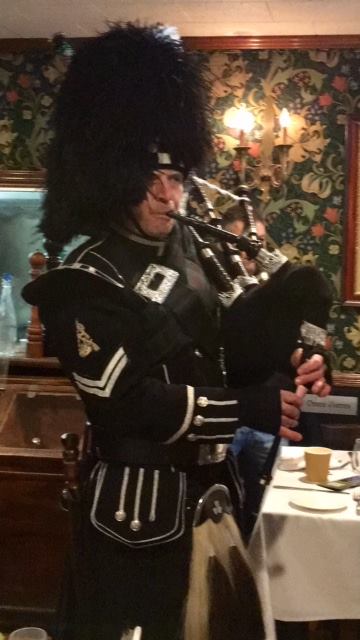 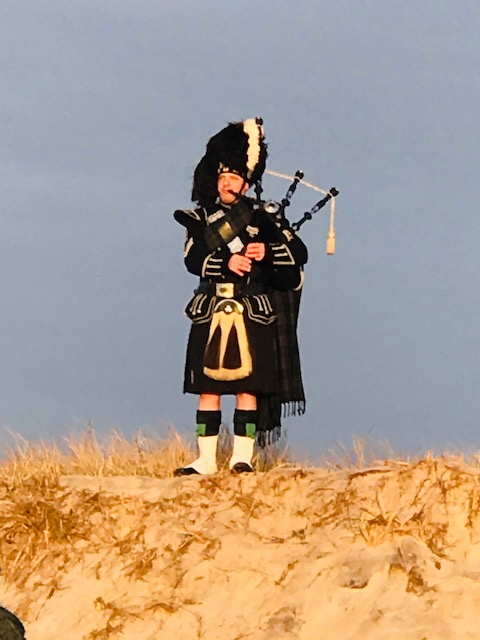 Take a moment to read our reviews and your choice will be simple. Recipient of the Best of 2013,2012 Award. Whether piping at a corporate function for Raymond James, or a Private Event, Hampton Pipes is invested in creating an enjoyable and memorable experience. Highlights include performances at Rod Stewart and The Police concerts. Our repertoire is extensive, but we also honor requests for new tunes and can transpose non-pipe tunes for the pipes. Always impeccably dressed!
Sound Samples can be furnished upon request. We'll suggest ideas to make your event unique and special. Our goal is to produce the best sound and dramatic staging for the performance.

I hired Victor for a surprise retirement party. From inquiry to the actual party he was friendly, professional and went above and beyond to ensure everyone is happy. He helped our guests practice singing along as he played " For he's a jolly good fellow" . He played song requests from guests and set a happy tone to kick off our event. He is a true professional and even accommodated our last minute time start change ( due to guests arriving late) . Super grateful for coming across his profile and our family and friends were given a very happy memory 🥰

Victor did a terrific job! Was on time, in full regalia and provided some nice traditional Irish St Patrick's Day music for the students.

Thanks for having me play at the school Dr. Addley.

Victor and Kenny were exactly what I was hoping for when I booked them to play bagpipes and drums at my father's military honors burial service this past Friday at Calverton. They couldn't have looked or played any better, and they're extremely professional and respectful. I highly recommend them and will certainly book them again for future occasions.

Thank you Stu. We were honored to play for your father.

We hired a bagpiper for our wedding ceremony and he did a fantastic job. He played before and after the ceremony which made it extra special.

Victor was an experienced & wonderful bagpiper. He addressed my parents by their first names, which made them feel special. As well as asking for their favorite song, Victor played a military tune for my father that was really beautiful. Victor made my parents 50th anniversary so special. My entire family is truly grateful.

So glad to have had Victor play...

Victor gave a beautiful dimension to my mother's funeral that was both dignified and comfortable. The music gave everyone a calming focus and the sound of the bagpipe was a welcome addition to the somber funeral ritual. His choice of songs was perfect and his figure, in full bag piper garb, is something I will always remember.

Excellent job!! Enjoyed by all!! Thanks so much, Victor!!!

Victor played before and after the wedding ceremony for my wife and I, along with our guests. He was nothing but professional and pleasant. He arrived early, played before, and after, met our every request on songs and time of play. He was great and I would recommend him to anyone!
Pete

Victor was great. I had him play at the end of my wedding for my husband. It was a pleasant surprise to my new hubby. Thsnks Victor.

Working at St. Joseph's College, I have seen a ton of performers and Hampton Pipes & Drums were by far one of our favorites! The students really enjoying the music as well as the historical information about bag piping! Very professional and easy to work with. Will definitely be using them again!

We gathered about 12 friends to celebrate Ann's 90th Birthday. Even tho the day was special enough we wanted to add something unique to make it even more memorable. The Hampton Bagpiper was the answer. He arrived on time, looked great in his kilts, and put on a wonderful show playing for (and talking to) Ann and her guests. If you're lucky enough to turn 90 (or have another type of celebration) make it special with the Hampton Bagpiper.

From the beginning of our planning, DH wanted a bag piper at our wedding. I wanted to surprise him the day of, so for 2 years, every time DH mentioned it, I told him no and that we couldn't afford it. I found Victor through gigmaster.com. His pricing was comparable to others, but he was local to me so I decided to meet with him. He had me come to his house one Saturday morning and after going over his contract and pricing, he took me to his backyard where he played for about a good half hour. It was one of the nicest most peaceful moments of my summer. Just me and a bag piper, sipping coffee on a nice summer morning listening to him play. I left feeling so excited for the big day, now I just had to keep this secret to myself. Victor showed up the day of on time and in his traditional kilt and attire. The moment my DH heard him play, tears came to his eyes. The moment I had been waiting for!!! He was so excited and I think I really pulled off the surprise. DH is the Irish one, so I had no idea when it came to songs what I wanted played. I explained this to Victor and he came up with his own play list and we enjoyed every song he played. This was definitely my extra splurge but it was worth every penny. All in all it was still an inexpensive gift and DH will always remember pulling up in the limo and hearing the sound of bag pipes.

Everything was terrific, we were especially impressed with the rapport with those attending and the adaptability for requested music- particularly the children who marched and loved the bagpipe music

The Ultimate Personal Touch for Our Family's Affair

I emphatically recommend Hampton Pipes and Drums to anyone considering adding a wonderful, personal touch for their special day. Victor beautifully played the bagpipes at my son's Wedding on St. Patricks's Day and he was truly a Highlight for the affair. He was punctual, personable and professional. This experience will forever be a lasting memory in our family.

I just wanted to thank you for today. It meant a great deal to my whole family and they felt it was just perfect. I so appreciate this. Thanks again.

Dear Victor-
How magnificent the two of you looked and how splendid you sounded! When you first struck up my heart leaped-you made the occasion very special for a former piper and quite wonderful for everyone else! Your band regalia are superb.
Thank you so much from both of us. Would you give us an address to send you a proper thank you note-I know Alexa would like to add her thanks to mine.
All the best-hope to hear you again-let me know where and when the band is playing…
Richard

Hi Victor - thank you so much for Saturday. You were a big hit, everyone loved you. You added so much to the party, it was a day that will be remembered always.

I want to thank you for your role in making our gathering a tribute to two people for whom friends, family, and heritage meant a lot. You helped us choose the right program, and your playing was perfect.

Hello victor!
I cannot thank you enough for playing at my wedding. You were amazing!!! People are still talking about it. Cameron and I were just talking about how great you were and regret not being able to talk to you more and tell you how much we truly appreciated everything. Not to mention all the help over the phone! We just wanted you to know, in case you don't already, how wonderful you are at what you do. I've got some great pictures of you playing that I am going to send you.
Thanks again for everything!!!!!
Xoxo
Shannon and Cameron M.

Our band experience has brought us from venues such the United States Military Academy
at West Point to the Nassau Coliseum. We've performed at the Jones Beach Theatre, playing at concerts for Rod Stewart and the Police. We've played with Rownan Tynan (The Irish Tenors) in our own home town of South Hampton. We have performed for Mayor Michael Bloomberg and other Dignitaries.

Our drummer is a highly qualified and talented percussionist with 26 years of playing experience and is the recipient of 5 solo drumming awards by the Eastern United States Pipe Band Association. The Dirge March is captivating when played by our World Class Snare Drummer as a tribute at a Memorial Service.

We can perform in Highland Military Attire or Formal Scottish Civilian Attire for a formal function. Our Snare Drum is draped with a mourning cover at funerals, for appropriate appearance and tone. Hampton Pipes will communicate directly with Event Planners, Funeral Directors and Honor Guards in planning your event. We will accommodate your suggestions and requests for particular tunes. Hampton Pipes hail from the eastern end of Long Island, NY. We will gladly put together a play list for your function.