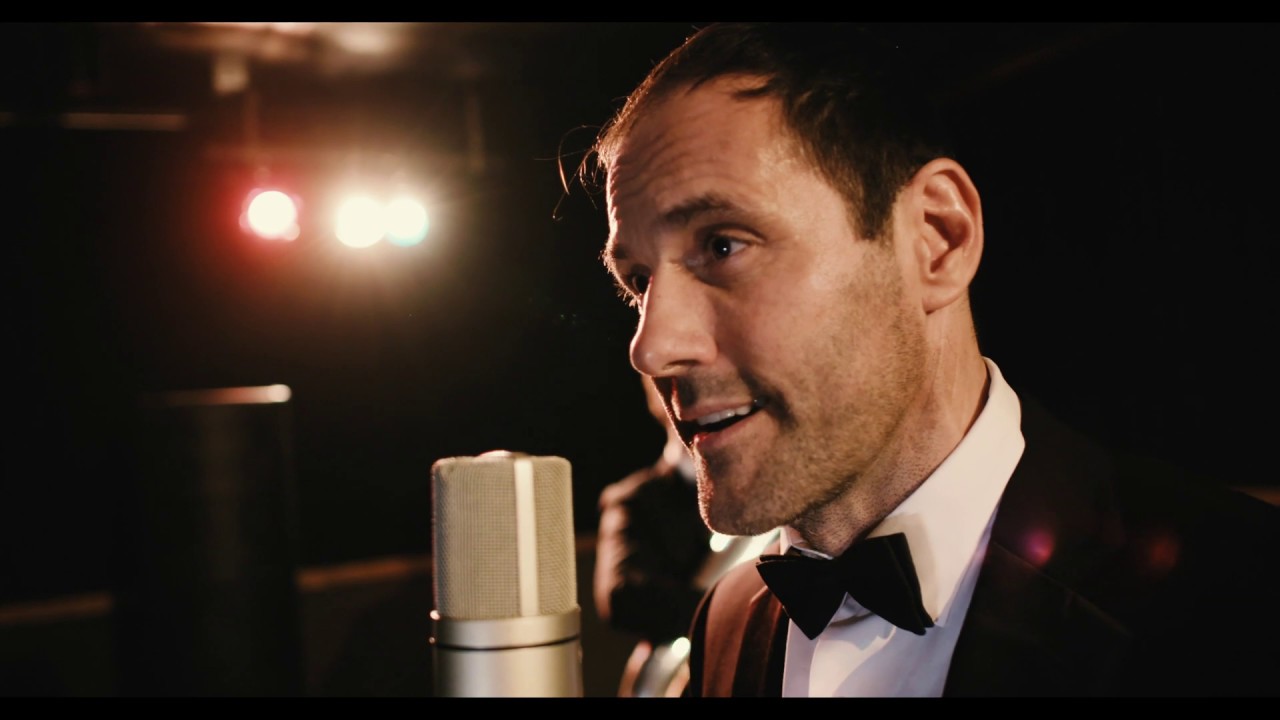 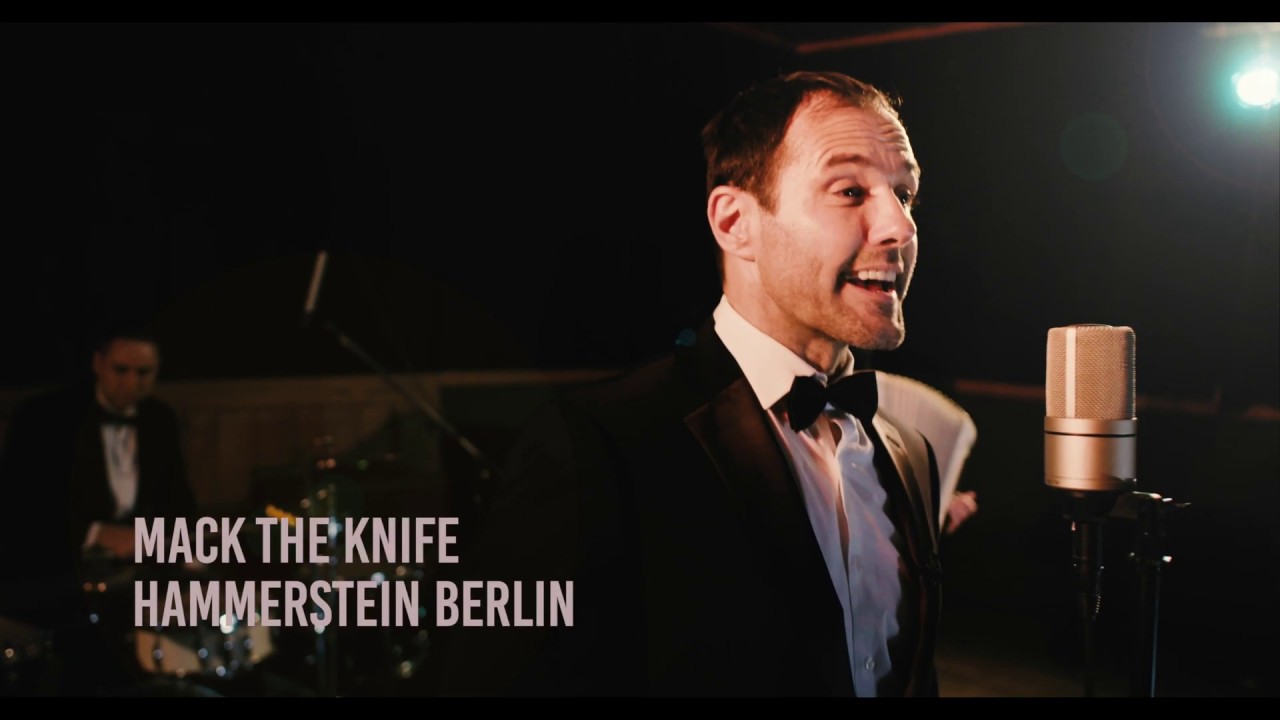 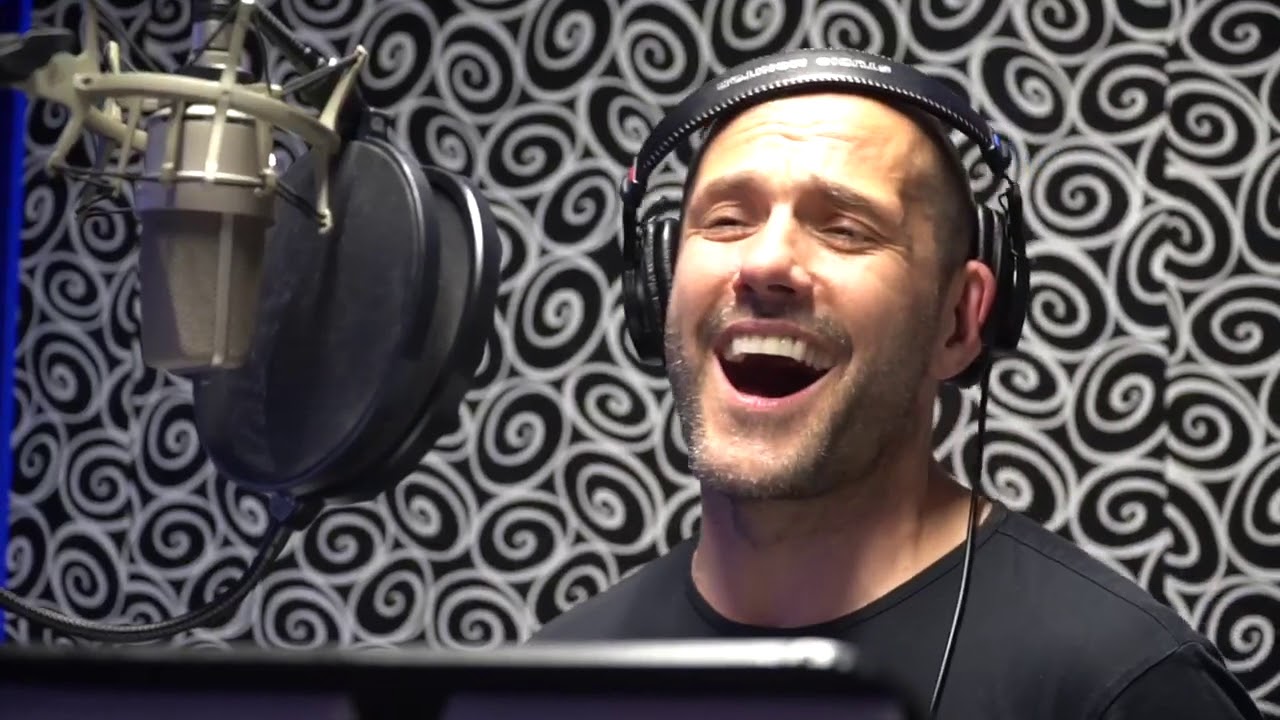 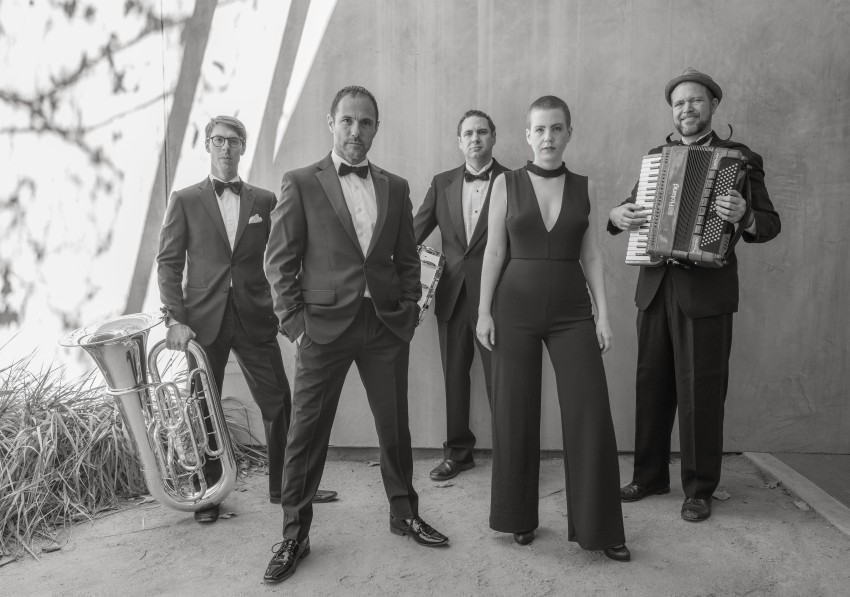 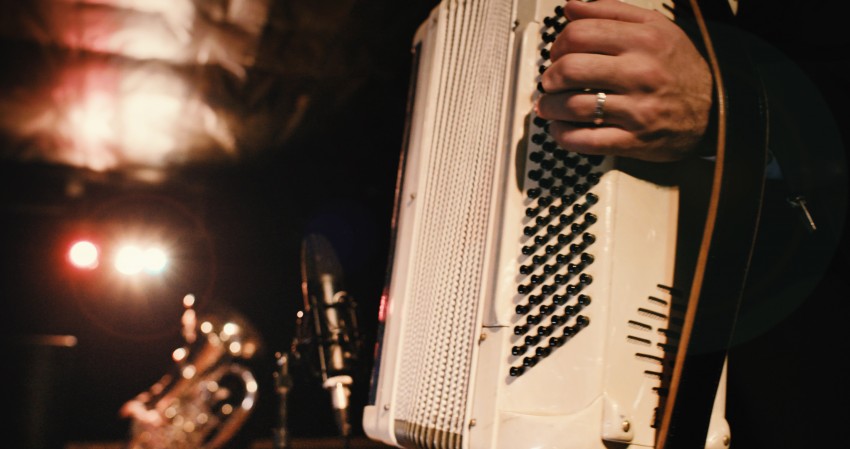 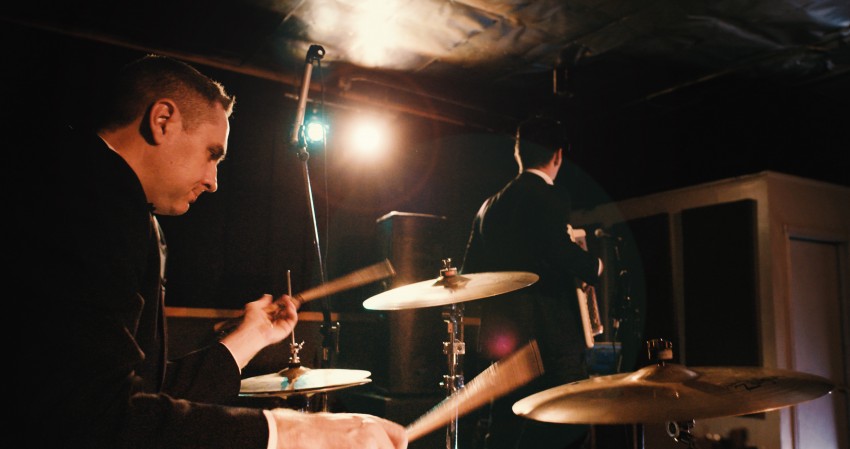 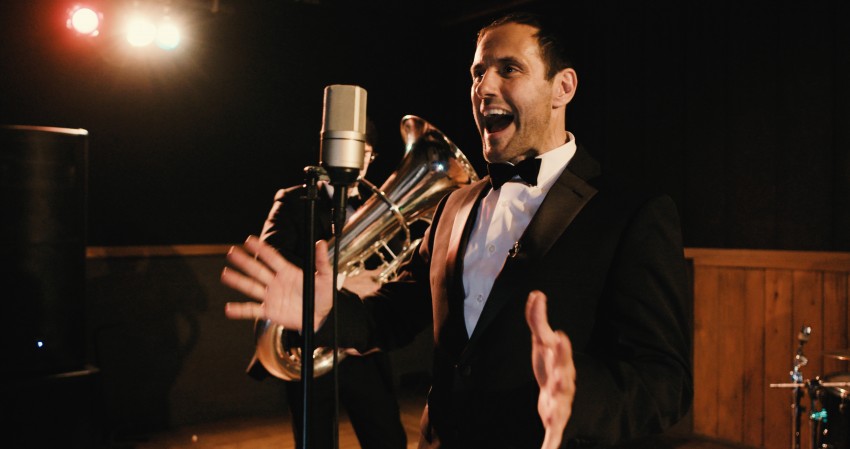 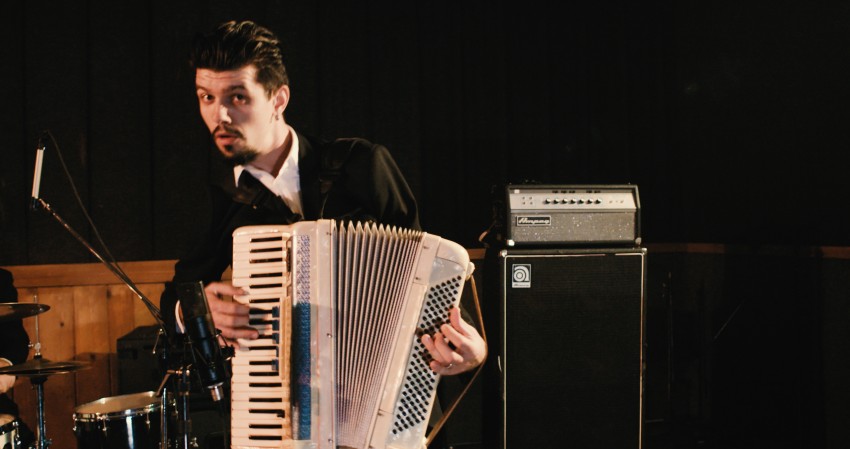 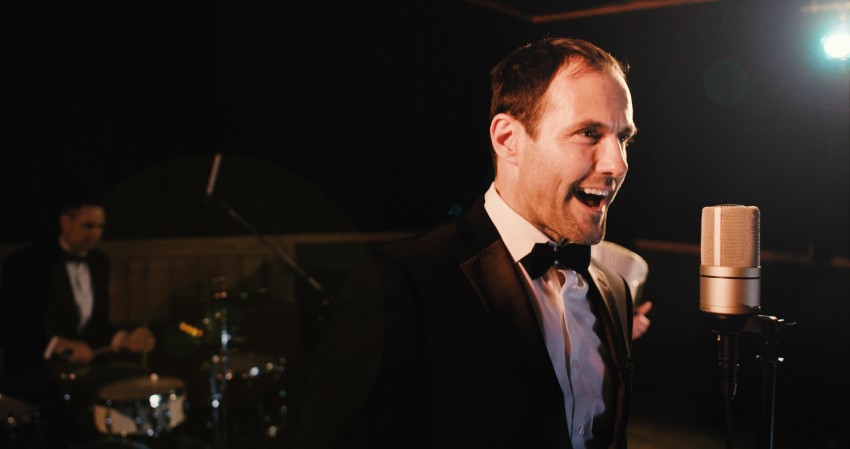 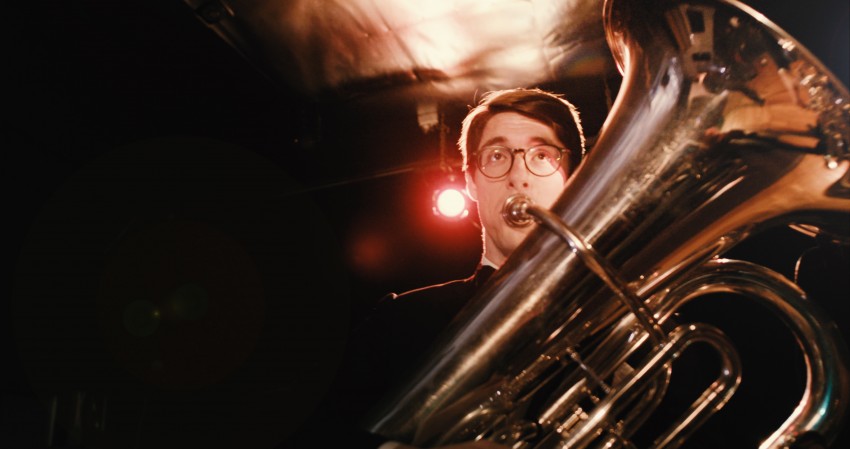 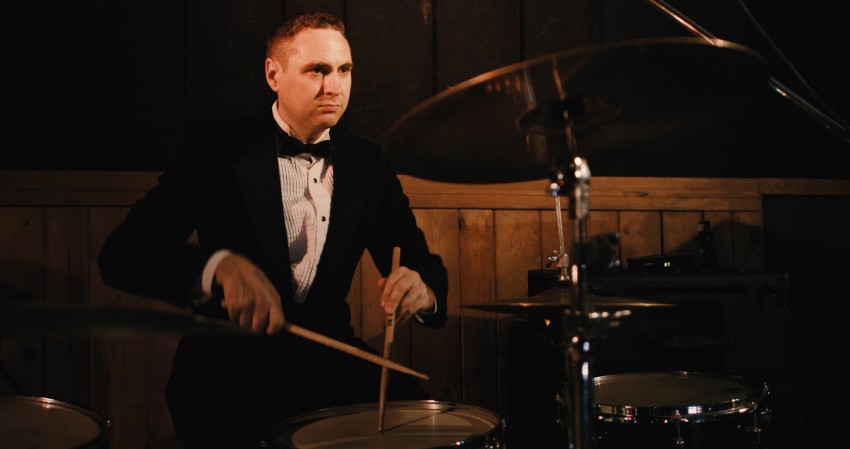 Bocelli meets German Jazz. Let us help you impress your friends and business associates with a night of elegance and sophistication. Lead by Opera Singer Andreas Beckett, HAMMERSTEIN BERLIN. is a 4-piece global get-down machine, performing standards, tango, operetta, and the occasional well-placed classic rock song in english, german, italian, spanish, french and russian. Our shows run the gamut from romantic serenades to infectious dance rhythms, from standard dance numbers to virtuosic instrumental features, and are a sure hit with audiences of all ages. We play dinner music, dance music, and party music, and specially tailor our presentation to the needs of your event.

Hammerstein is a wonderful, eclectic, entertaining band fronted by the charismatic Andreas Beckett. We had a wonderful time as the band played many international hits and crowd pleasers. From “Jack the Knife” to “Besseme Mucho”, I loved it. Also the audience participation and getting everyone to dance and move around was a laugh riot. I really couldn’t stop laughing.

My experience with the band was top notch. Professional and respectful.

Hammerstein Berlin was hired for an employee event. We were looking for something a little different that was fun, and boy, did they ever deliver. Hammerstein Berlin not only had the room rocking and the crowd clapping and singing along, but it was by far the best employee event we're ever had. People left the party on cloud nine and for days were singing their memorable polka version of "I'm Too Sexy For This Shirt". Andreas is the consummate performer and leader of the band who masterfully handled the crowd. Hire Them! You won't be disappointed.

Thank you for the review! We had a blast playing for your event!!

Hammerstein Berlin played at the Alpine Village Restaurant on New Years Eve 2018. They played a variety of music throughout the night and there was something for everyone. What a great playlist. As a bonus, Andreas sings in multiple languages. They really kept the crowd dancing. Many of the guests commented on how much they enjoyed the music. It was a pleasure to work with Andreas and his band. I would highly recommend the Hammerstein Berlin Band for your event.

It was awesome to play the New Years Eve party at Alpine Village. Great venue, lots of dancing and tons of fun!! Thanks for having us!

What a night! We booked Hammerstein Berlin via GigSalad for our company’s annual event, and they exceeded our expectations. If you're looking for 'opera meets big band' to impress your clients and give back to your staff, Andreas and his guys are the band for you! Thank you for a memorable evening that has not stopped being discussed in the office since.

Hammerstein Berlin has worked for the following events:

ANDREAS BECKETT (Band leader, singer) is an accomplished international performer whose work includes stage, film, television and opera. Operatic appearances include ALFREDO in LA TRAVIATA, THE DUKE in RIGOLETTO, FLORESTAN in FIDELIO, TAMINO in MAGIC FLUTE, the leading role in CHARLOTTE: A THREE COLOR OPERA at the Met Theater in Los Angeles, the role of TONY in MASTERCLASS at the Lobero Theater in and at the Will Geer Theatricum in Los Angeles. Mr. Beckett has sung the role of SPOLETA in Opera Santa Barbara's production of TOSCA.
A native of Bavaria, Mr. Beckett was invited to come to the United States to perform in Cleveland Opera's WEST SIDE STORY. Andreas made his television debut playing Hitler on SATURDAY NIGHT LIVE. This was followed by his acclaimed portrayal of MACBETH at the American Theatre in New York. It was during this period that he also played the lead in his first film, EMPTY by Micah Herman, earning the Audience Award at the DGA in Los Angeles.
Andreas was seen on the big screen recently in TRANSFORMERS 4, he starred in the PBS film ESCAPE FROM SOBIBOR and he won the Best Actor Award at the international Film Festival in Monaco for the Film MY CHRISTMAS WISH. He guest starred on DR. VEGAS (CBS) and DAYS OF OUR LIVES (NBC). .(link hidden)

ALEKSEI CHEBELIUK was born in Samara where he began learning accordion at the age of 7. By the time he turned nine he had participated and won regional, provincial and international accordion competitions. He has music and technical degrees. At 19 years of age he formed the cover band "Smile Band" and for 5 years was the sole producer and concert tour manager for the band. Aleksei was also a producer for other bands and solo artists in his home city. He worked as an administrator to the Russian stars concert tour manager for 3 years. When he was 25 he moved to the United States where he established an on-line school of music and foreign languages. Aleksei has worked and performed with a Brazilian band as well as several other bands in Los Angeles.

MIKE DEUTSCH has been playing drums and percussion since 1990. In 2006 he graduated from CSU Northridge earning a Bachelor of Music in Percussion Performance where he studied drum set, orchestral percussion, and hand percussion. Currently, Mike works as a musician in the Los Angeles area collaborating with orchestras, musical theater, chamber music, and recording studios.
Television and Film credits include appearances on AMERICAN IDOL, DANCING WITH THE STARS, ABC’s premier of DUETS, Nickelodeon’s 2014 KIDS CHOICE AWARDS, and the film THE GAMLER. In the studio, Mike has recorded music for CASTLE and the title theme to HOW TO BE A GENTLEMAN.
Mike has been honored to perform live with the Los Angeles Chamber Orchestra, Los Angeles New Music Ensemble, Video Games Live, the Los Angeles homecoming of the space shuttle Endeavor, Danny Elfman, Mitzi Gaynor, Betty Buckley, Marvin Hamlisch, and The New York Tenors. (link hidden)

STEPHEN NUTT is a native Southern California tuba and low brass player. He splits his time between gigging as a freelance musician, managing and producing chamber concerts as founder and Artistic Director of the FreeLAncer Series in Glendale, acting as an orchestra manager for Brevard Music Festival, and trying to find the best views in SoCal mountain ranges.
Stephen has appeared with various local orchestras, including the American Youth Symphony, San Fernando Valley Symphony, Westlake Village Symphony, and the Antelope Valley Symphony. He attended CSUN and UCLA and maintains an active private teaching studio.

Evelyn D. said “The Apollo Trio provided background music at a corporate cocktail party in Seattle for over 500 international clients and friends of our firm. They struck…”

Hector R. said “I was very happy with the professionalism and how easy it was to coordinate the specific details I wanted. Music was beautiful a pleasure to work with.”

Maria L. said “Could not have asked for more talented musicians last night! Thank you, you made our party unforgettable!”

Reuben E. said “The Amanda Castro band played at our wedding reception, it was beautiful, it was incredible, the vibe was perfect, they worked with the wedding coordinator…”