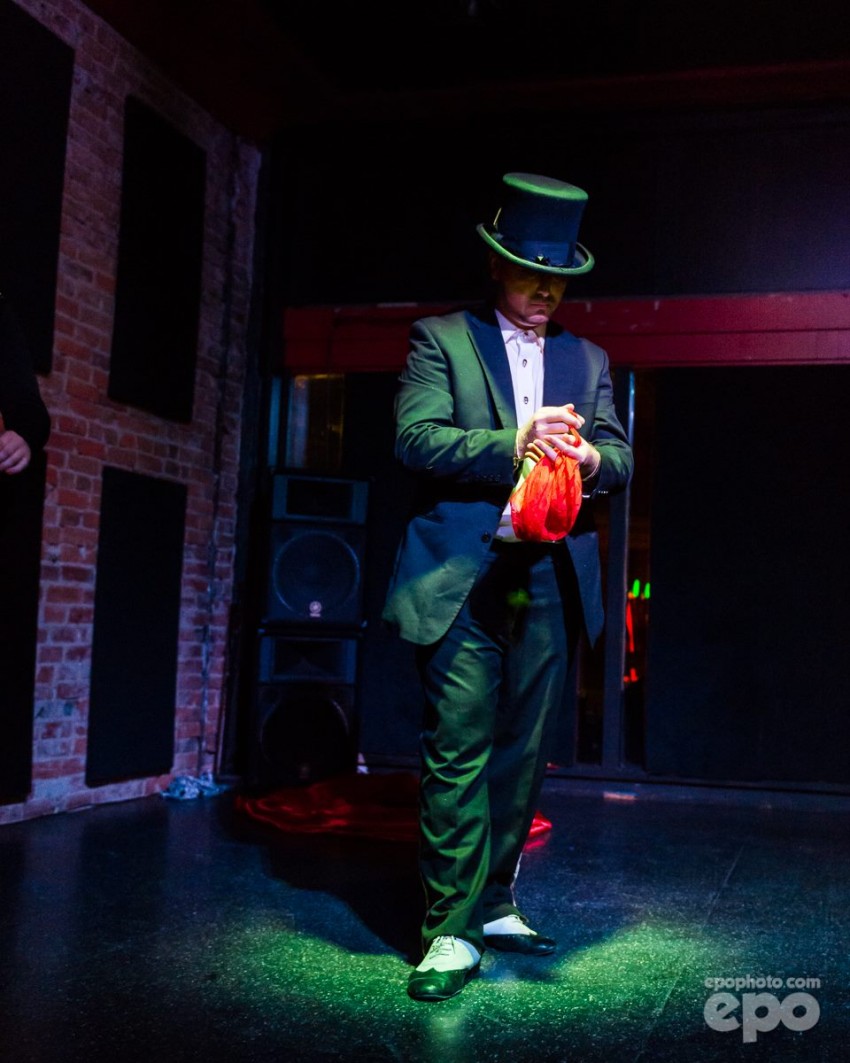 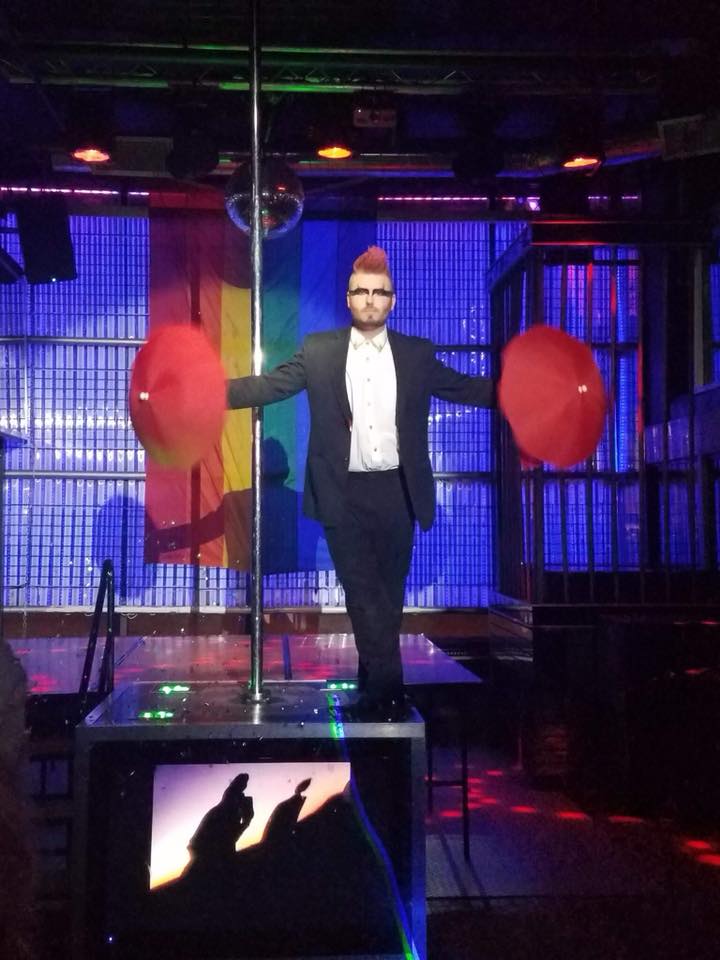 Gambit Performing a Burlesque Number at a Night Club 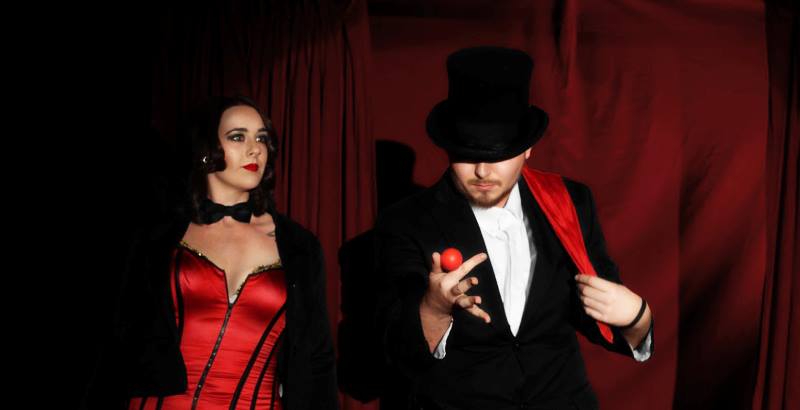 Performing for the Groom of the Wedding

Performing Close-up at a Farmers Market 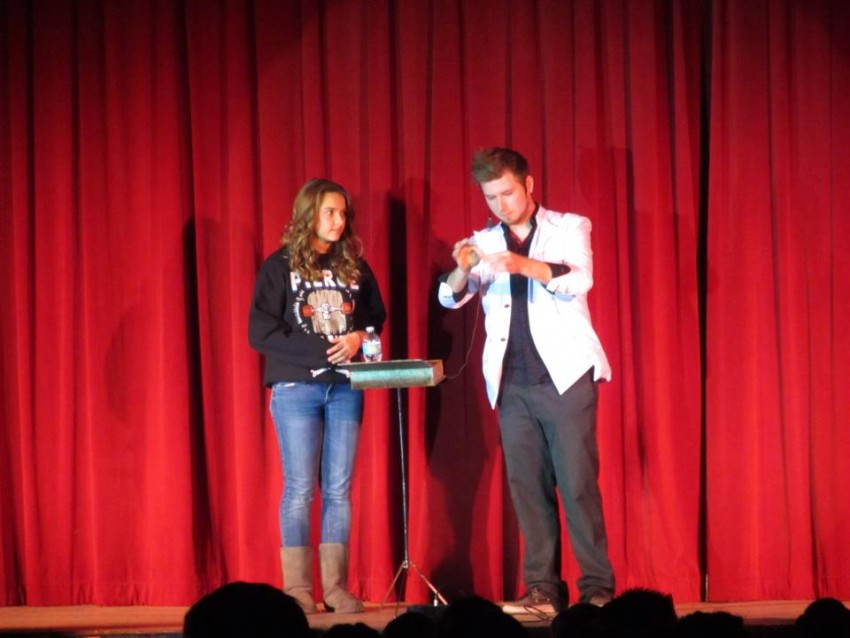 Gambit Performing as Tally-Hoe Blowing up a balloon 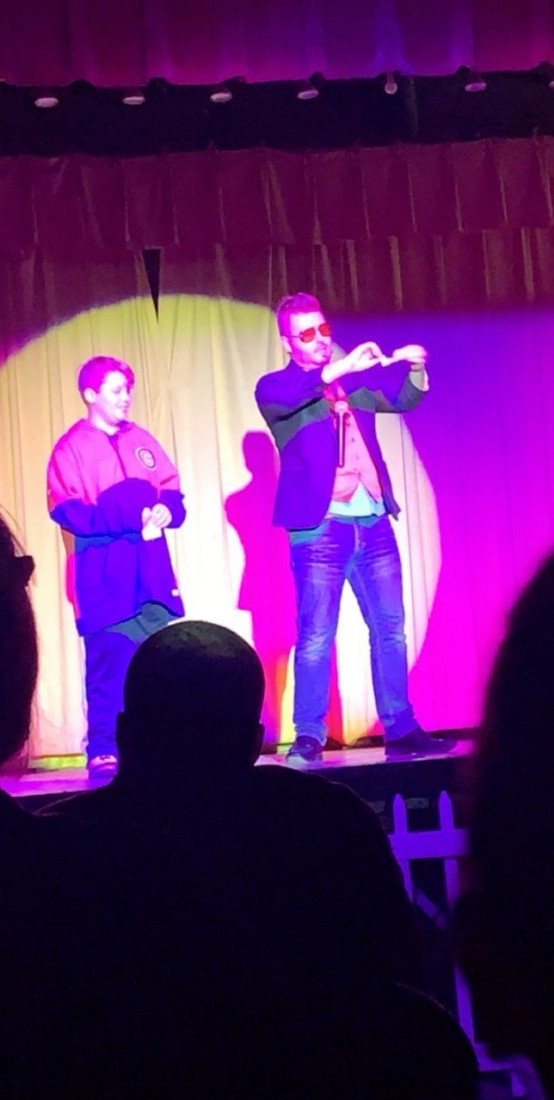 Not your Ordinary magic show! Gambit is a multi-talented performer, who has created a magic show that has taken the Midwest by storm. His act is 100% impromptu, so you know that each show is in its own right a unique and engaging experience.

He really got the audience involved.

We were situated on both sides of the room and it was hard to address everyone. He really involved the audience and enjoyed the performance.

Stage/Stand-up Performance: Length 10-45 mins. (Anything over 45 mins can be discussed)
-Weather it be stage or stand up, Gambit brings his 13 + years of magic and performance experience. With pre show music playing to get the audience ready and Gambit will be in the audience greeting guests, and showing some quick tricks. Because he wants to make sure the audience walks into the show, rather than waiting for the show.

Close-up/Walk-Around Performance: Length Between 1-3 hrs
-When Gambit walks into a room, he is ready to perform and instantly maps out the venue in his mind. Make calculative decisions on his foot path for the night. Where the best hot spots are, Who are the wallflowers and how to get them engaged and interacting with other guests. His mission is to make sure everyone is having a great time. If they are not enjoying themselves and the event, then he has brought dishonor to the event, the guests, and his family. By utilizing his main weapon of attack, he will wow, amaze, mystify and disrupt the cognitive flow of your guests. By using his years of bartending experience which allowed him to develop comedic timing and quick witted comebacks, Your guests will either be accidentally swearing due to the magical tom foolery, or laughing hysterically. Keep the men with white coats on check, you may need them.

If booked for a close up / walk around event, a stage show can be added for an additional fee.

Gambit was born Kyle Bassett in an extremely small town located in the south end of Central Illinois. He loved art, learning new things, and challenging himself to see the world from as many prospectives as possible.
He was of a young age when he first discovered magic <as most magicians do. However being from a small town where the closest library was farther than his parents were willing to drive. There was no way for him to learn. So over the course of many years, the idea of Learning magic would pop back up into his head and he would try to come up with his own tricks. But they all failed. Mainly because he lacked the knowledge and had no idea where to even start.
The first trick he can remember learning was when he was 6-7years old. His brother took the 4 kings out of a deck and placed them throughout the deck. With a snap of his fingers, all the kings reappeared on the top of the deck. He was disappointed to find out that the trick used 8 kings, and hoped it was more complex than that. Fast forward about 10 years - Kyle is now 16 and no longer lives in that small town. Now he lives in a Pekin Illinois, where he learns about a man on TV who goes by the name of Criss Angel. (not his real name ... Shocker)
He becomes addicted to his show and watched it whenever he could get a chance. On October 31st, 2006, Kyle watches the Halloween Episode of Criss Angel, and in this episode, he teaches the viewers how to make a toothpick vanish. Sadly, however, Kyle did not have the material to try the trick out. Fast forward to the school later that day, Kyle keeps thinking about the trick. How it's done, and ways he could get the material to try it out. 3rd period class right before his lunch period was Science. And today the students were tasked with testing different chemicals under fire and noting how they reacted. The items they used just so happened to the be the items needed for the trick. After class ended Kyle grabbed up all the items he needed and bolted after his friends who were on their way to lunch. He stopped them and showed them the trick, and they freaked out!!! Kyle also lets out a shriek that could only be compared to a sound a little would make when they get a pony... He was shocked and amazed that the trick worked. The method was stupidly simple, ad he thought they wouldn't have been fooled at all... but they where! Then it started. He understood the basic idea of what magic really was, and so he started studying. Kyle looked all over the internet for info on magic. When he was unable to find anything else, he used his tech knowledge to ascertain a fairly decent and large digital library of magic.
Each new trick Kyle learned, he would go out to the Pekin park and test it on anyone he could find. He wouldn't even practice the trick. Once He learned a trick it stuck in his head and he was able to perform if "almost" flawlessly <Keyword is almost> His most common tricks where card based, and he showed amazing dexterity with cards so his classmates gave him the nickname Gambit. Gambit is a Marvel mutant character with the ability to supercharge objects with kinetic energy and cause them to explode. His go-to object of choice was Cards.

Fast forward and Gambit has performed all over the US, has appeared on TV, Radio (that ones a bit odd), has won numerous awards in performing. He has combined his loves of many passions into an interesting art form and blending boarders amongst different types of art. By doing so he has created 3 different but vastly different styles of Performing. Gambit, the Improvisational Magician. Gambit, the Burlesque Magician. And Tally-Hoe, the dark mad-hatter magician from a sideshow. Each persona comes with vastly different performing styles that challenges Gambit as a performer to push himself.

Walk around - Bottle Water, a location away from guests to reset tricks, and to re-hydrate.

Stand up (small room) - Bottle water, access to power, paper towels, a chair.
*Performing in front of windows is a bad idea for it makes it hard for guests to see the show, also exposes the show to passer-bys.

Stage (large room/Theatre) Water a chair or 2, If you have a sound system ill use it. If not that's fine, Access to power, Paper towels.

All venues MUST include a location for Gambit to get his show ready. Normally he will be able to get ready at the performance spot, but it's better if guests do not see the setup/get ready.

I have seen different performers from all walks of life and all different styles of performing arts from Burlesque, comedy, sideshow, circus based, magic ... etc. The list goes on.
Knowing so many people from so many different backgrounds help me to see what I do in different lights, which influences how I perform. From how I walk on stage, to how I interact with guest.

Each action (no matter how small) Has a big impact on how the guests see what you do. Every bad show I see, teaches me what not to do. Every good show I see, makes me think about my own show and how I can make it better.

2 or more Bottles of water

An outlet or access to extension cable for sound