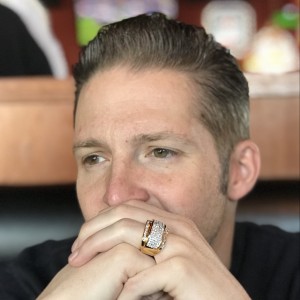 Dr. Trimble has been face to face and toe to toe with some of the most dangerous criminals as well as some of the most brilliant and professional minds, and is equally at home with both. His unique delivery blends humor, storytelling, and genuine care empowering audiences to change their lives in positive ways. His past topics have included anxiety, depression, stress, time management, self esteem, the power of change and the reasons why we often don’t, substance abuse, marriage and relationship problems, forgiveness, overcoming trauma, goal setting, overcoming adversity and self doubt, finding meaning in loss, creating tenacity. Customized topics can be worked out according to the event.

Be the first to review From the Ashes

Jeremy Trimble has been working in some form or another since he can remember. From mowing lawns in the summer months to chopping firewood in the cold months, he’s always had his mind and body moving towards something bigger. While enrolled at Pepperdine University where he majored in Pyschology, he flipped burgers and washed cars for a few summers before studying literature in Paris for a year. He came back ready to enter graduate school, also at Pepperdine, where he earned his Master’s degree in psychology. He began working clinically with children with autism and moved quickly into an associate Directors position at a organization for adults with developmental disabilities and severe behavior problems. Within a few years he was promoted to Director and eventually Senior Program Director of the organization. As he completed his Doctorate degree in Forensic Psychology he went to work for the largest correctional facility in the world for a few years before moving on to doing forensic psychological testing in the federal prison system in Los Angeles. While there, he worked with some of the most notorious and violent offenders in the system. From there he went to work at a locked forensic State Hospital for the criminally insane and incompetent. While there he completed training in neuropsychological assessment. Eventually he moved to Northern California and began working in the notorious old Folsom State Prison, in the segregation unit: ”the hole,” the end of the line. He continued work outside the prison walls doing psychological evaluations of candidates for the police academy and began consulting with various agencies in doing psychiatric examinations for the Social Security Administration. He is currently a contractor with the U.S. Navy working with active duty sailors and Marines to help them adjust to transition to civilian life after traumatic wartime experiences, and he is also a Commissioned Officer (CPT) with the U.S. Army Reserves.
Dr. Trimble has spoken to a wide range of audiences including veterans and new recruits on military bases, inmates in county jails and prisoners in maximum security prisons. He is as at home delivering impassioned speeches a church assemblies as he is in the darkest depths of the penal system. His dynamic personality and humorous no-holds barred delivery break through preconceived notions and communicate an understanding for the individual’s experience. Dr Trimble connects quickly and deeply with his audiences to draw them in, hit them with his message, encourage thought, and inspire lasting action.
Dr. Trimble has been face to face and toe to toe with some of the most infamous and dangerous criminals as well as some of the most brilliant and professional minds, and is equally at home with both. His blend of humor, storytelling, psychological fact, and genuine care allow audiences to be empowered to change their lives in positive ways.
Whether you are looking to make a change in your life, reconnect with god, get off drugs, or just sell more widgets, Dr. Trimble can inspire you to rise.
Anxiety, depression, stress, time management, low self esteem, the power of change and the reasons why we often don’t, accepting mental illness diagnoses, substance abuse including drugs and alcohol, marriage and relationship problems, affair proofing your marriage, power of forgiveness, overcoming trauma, goal setting and achieving success, overcoming adversity and self doubt, finding meaning in loss, creating tenacity.