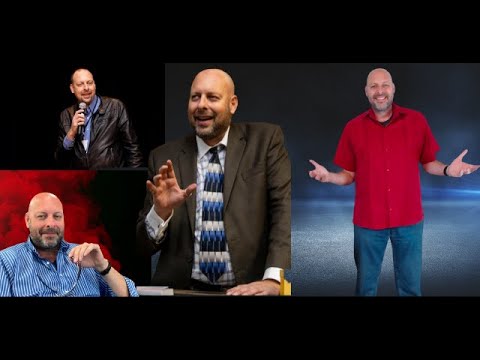 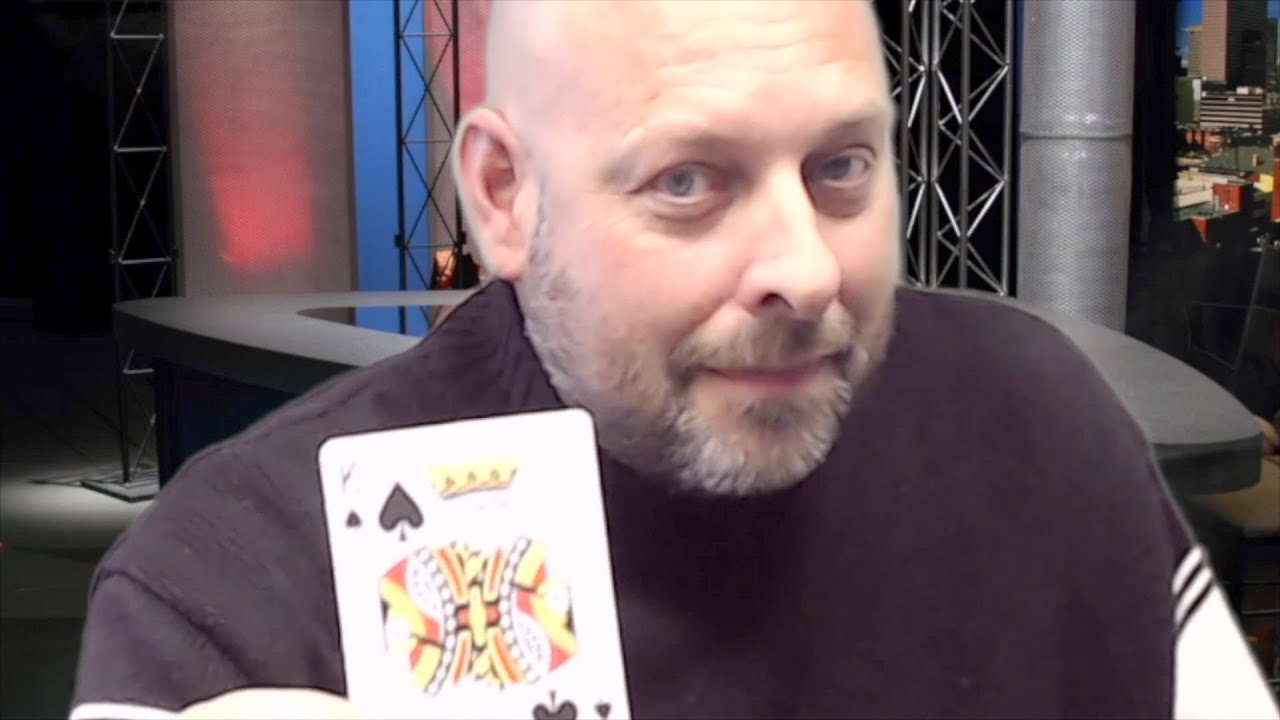 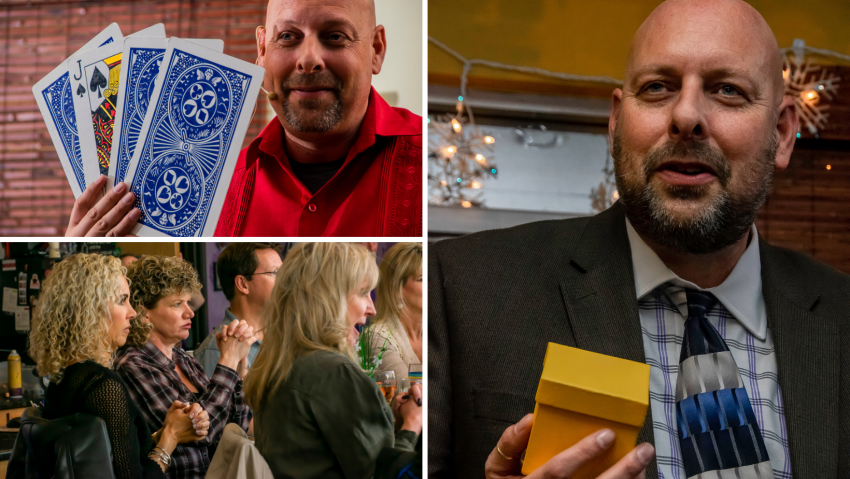 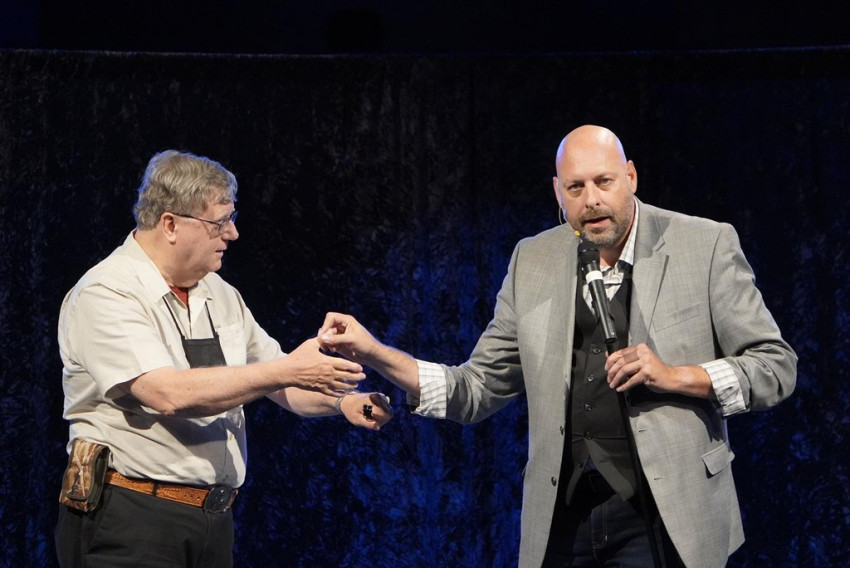 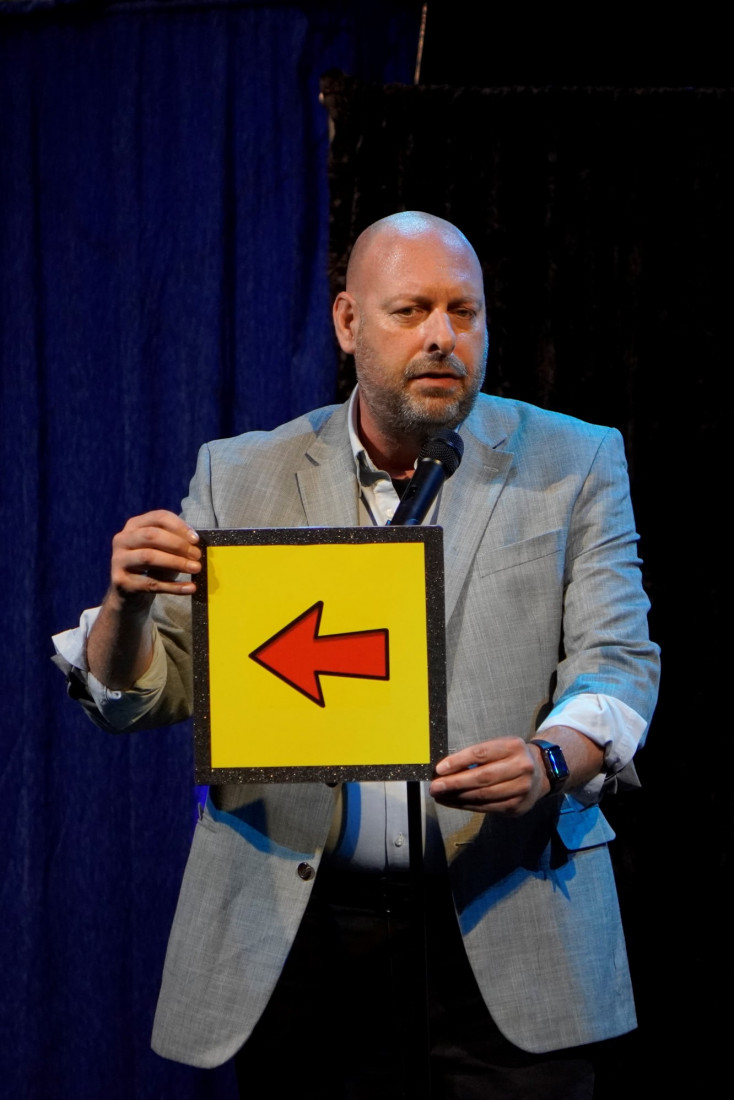 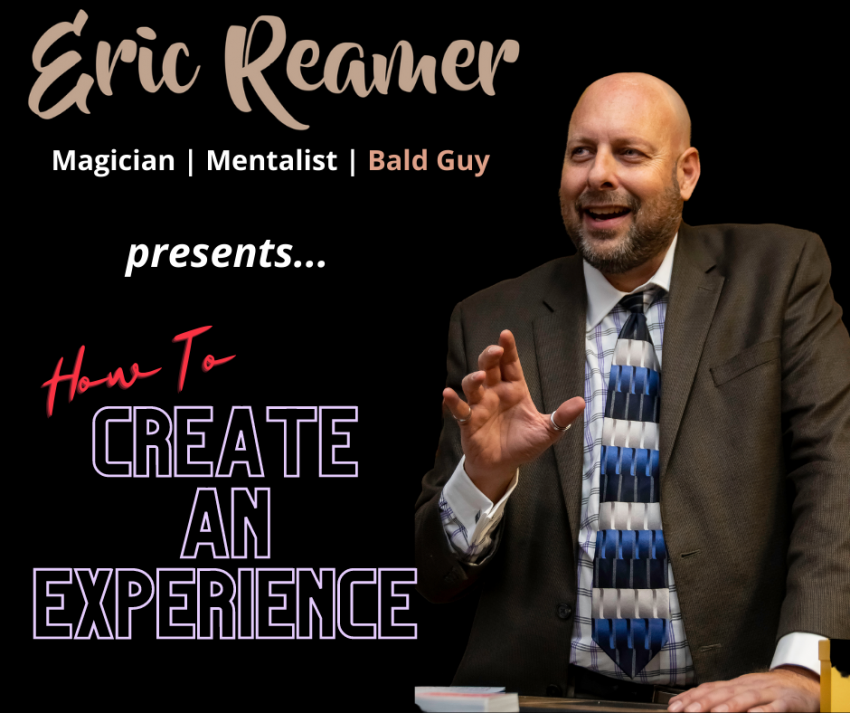 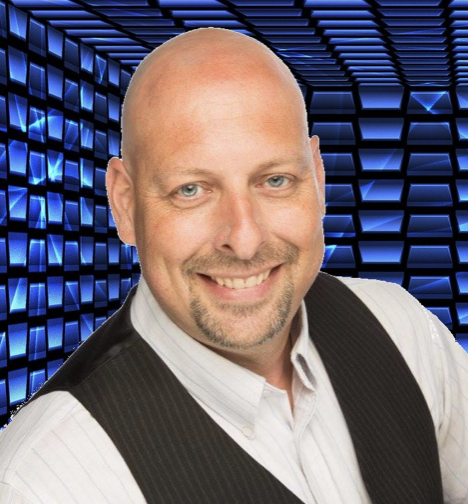 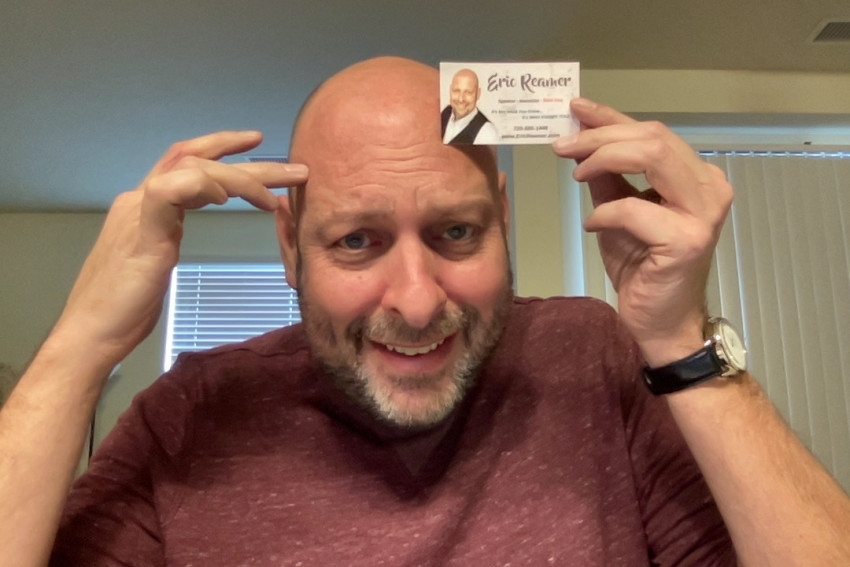 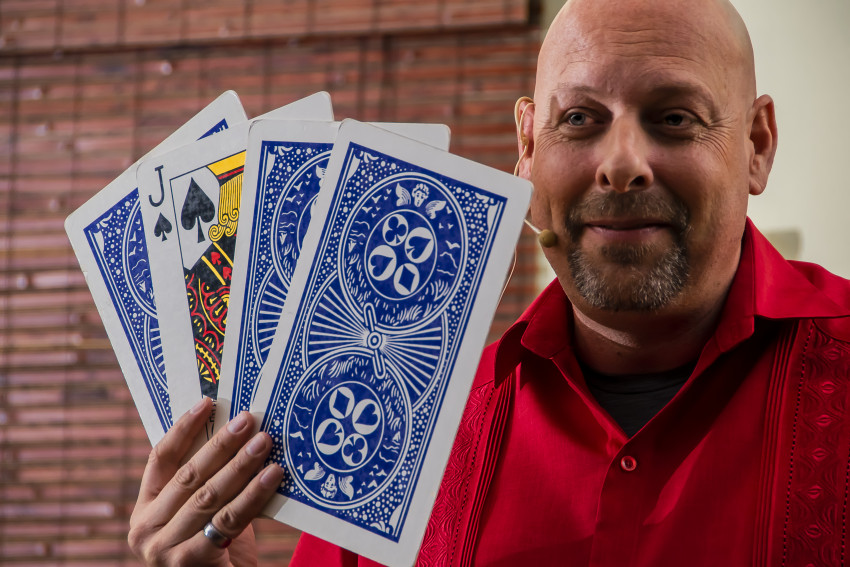 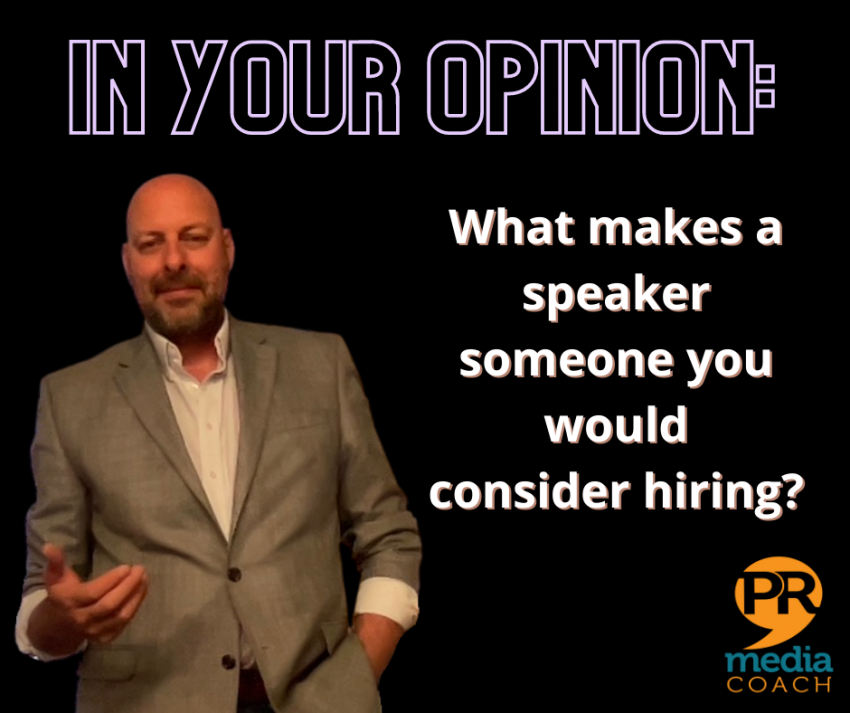 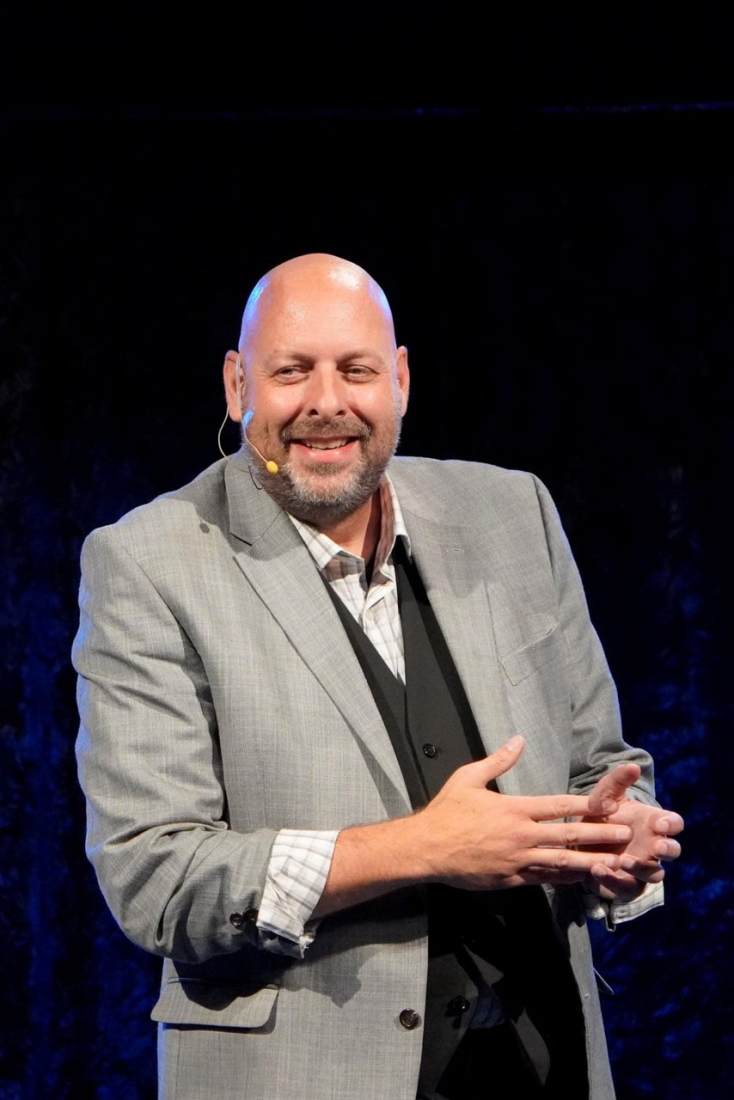 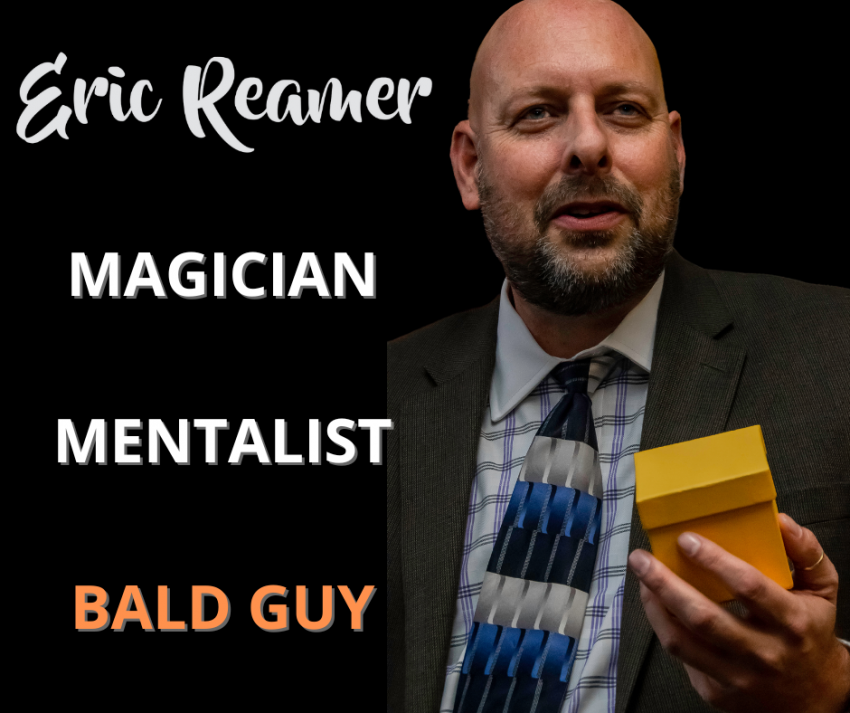 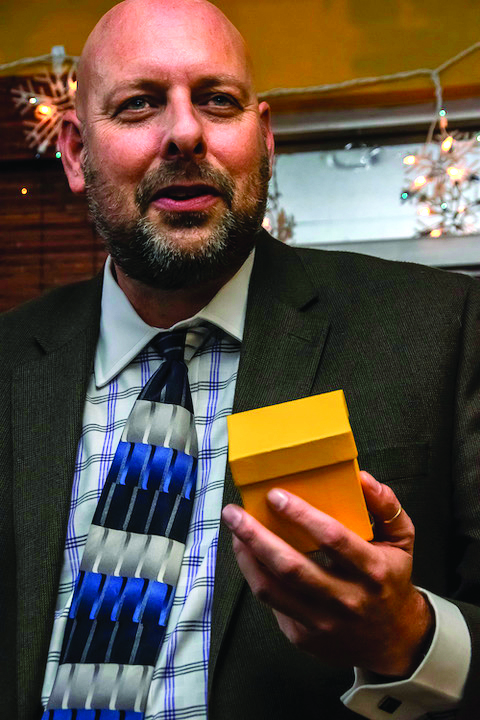 Eric Reamer is an award-winning professional magician and mentalist with over 35 years of experience performing for audiences all over the world. His presentations are 100% clean, so you can confidently put him in front of C-Level executives as well as family audiences. He has performed for the US Army, corporations, small businesses, hundreds of schools (Elementary through College) and thousands of churches throughout his career. His unique brand of humor and mystery will leave your audiences laughing, scratching their heads and most importantly - thanking you for hiring him. Shows may be customized to meet your specific entertainment needs. Events, Parties, Trade Shows, Stage Shows, Church

Eric is a wonderful entertainer. My guests were lined up for him!! He made my wedding reception a hit!!

Thank you so much, Stephanie! You were an absolute GEM to work with, and your guests were (are) second to none! I wish you and Dave the very BEST... and hope to come hang out and entertain with you again sometime soon! - Eric

What a fabulous addition to our Gala!

From the start, Eric was so easy to work with. He was polite, arrived early, and was unobtrusive. Which is exactly what we wanted. He even asked for the run of show so he knew what was going on and could learn more about our event. It was a corporate gala.
The people he engaged with they all said he was great! I could see the amazement on their faces as I walked the room during the night.
Thanks so much, Eric for being such a wonderful surprise addition to our event.
Deborah

Great for a company party!

Eric was a delight! We had him perform at our company holiday party, and everyone had a great time!

Thank you so much, Kirsten!! It was a genuine pleasure to serve you and your company! And from the very beginning, you and Lauren made such an incredible impression! You represent your brand so well. I hope to connect with your group again in the future!

Great entertainment, personable and excellent skill. Everyone had a blast

Thank you so much, Eric! It was a genuine pleasure to meet and perform for you and your entire wedding reception party!

Eric is a great addition to any party. He did amazing card tricks and enchanted the crowd at our corporate summer Party. Highly recommend!

What an amazing night

Loved this performance. Eric was engaging with the audience. Witty. Mind boggling. I could hear other people around me asking “how did he do that?” Loved the way he was interacting with multiple people at the same time. Keeping everyone on their toes. If he comes to your area…. GO !!!!

Eric performed at my daughters college graduation party, and wow did he over deliver! I can't recommend him highly enough! Great close up magic, slight of hand and the best personalized magic.

Do yourself and your group a favor and have Eric at your next event! He is great!

He made the party! He came early, didn't watch the clock and over delivered!

Thank you so much, John! What a genuine pleasure it was to be part of Mary's graduation celebrations! The 9 of Diamonds will forever hold a very special place in my heart from now on! Would love to stay connected, my friend!

We loved having Eric at the Senior Living home I work at. He put on an amazing show that kept not only the residents, but staff and families entertained. He is very engaging, humorous and professional. Everyone had great things to say about you after the show was over, and they loved being a part of it! Thank you for preforming for us, and we can't wait to have you back! He is a great addition to any event or entertainment.

Kaylee, you were AMAZING to work for! I absolutely loved your residents... and the entire program will go down in my heart as one of my all-time favorites! The reactions to "white maltese" and "purple panda" were absolutely priceless! <3 Until we meet again... thank you so much!

Eric performed for our Easter event. He was great to work with, and he captivated the audience with his illusions. We would highly recommend Eric!

Thank you so much, Michelle! I so enjoyed my time with you and your church! I sincerely hope to work with you again! Blessings!

Wow! Eric performed for the kids at 11:30pm and while we all were tired, his performance energized and captivated. Eric’s tricks as a magician wowed the kids, but the mentalism is what really blew them (and the adults) away. We watched the kids with their hands on their heads saying “There’s no way…” as Eric made predictions that came true. Truly amazing! After the performance, a couple of students went up and talked with Eric- we watched as he performed a couple of tricks for them that left them in awe. It was touching to see him take that extra time for those students. Thank you for a magical night, Eric!

He kept the kids engaged!

Eric dazzled our small group with his magic. He developed a wonder rapport and had us leaning forward in our chairs in anticipation. Humor, getting audience participation, delivery and outstanding magic are Eric gifts. After a month our group is still talking about Eric's show. I would highly recommend him for you occasions.

Thank you so much for your kind words, Jerry! It was a genuine pleasure to perform for you! I hope to make this a regular get-together, and look forward to the next time we meet!

30 Residents loved the show thought it was grate.

We had about 30 residents come to join in the program. Eric was hired for our resident Christmas party. He gave our residents the best show. I got such great feed back form them. Eric had the audience participated in some of the magic which they enjoyed. I would not hesitate in bringing him back for our residents. Eric has an up left personality and was a joy to work with.

Nikki - It was an honor to work for you, and I so enjoyed meeting and speaking with so many of the residents! I'd love to return and make any special occasion even more special! Thank you so much!

I first met Eric at a luncheon where I had the honor of listening to him as a Key Note Speaker. Not only did he impress me with is magic, but he helped me become stronger in business. He taught me how to "create an experience" with my clients. Now, I leave them wanting more, and I myself have become a more powerful performer. Not only that, he very generous and cares about the community as he recently volunteered with me to help out an organization. I definitely recommend Eric for your gigs or a a speaker for your next event.

Eric Will Blow Your Mind!

I had the great pleasure of seeing Eric at an intimate venue in my home town. His interactions with audience members kept everyone engaged, amazed, and genuinely delighted. What a pro!

Eric was a part of a camp that I did for several years.
His ability as a magician is like none other I’ve ever seen! The ability to communicate as a magician is a real craft and a sign of a true pro. Eric’s skills are unmatched! I would highly recommend Eric for any type of venue! I’m so thrilled to see he’s back to performing public shows again!

When you hire Eric Reamer, you get a seasoned veteran who will help make your star shine brighter. Eric has produced and/or performed for events from private parties to full blown festivals. His ultimate goal is to get your audience to thank you for the best event, ever! To that end, Eric will:

- Communicate clearly, establishing expectations and event-specific deliverables.
- Show up on time. (No more, "I hope the talent shows up". Eric will be there!
- Finish on time. (Eric won't go over his allotted time. Ever.)
- Work very well with audio/video and lighting engineers.
- Produce a program that generates audience laughter as well as wonder.
- Engage with the audience throughout.
- Leave you and your audience wanting more.

Eric Reamer is an American magician, mentalist, radio and television producer and personality. He is also a professional speaker with over 35 years of experience educating and entertaining audiences all around the world. He started his professional performing career in 1988, and by 1991 was touring all over America with his family-friendly brand of motivational magic. In 1995, he launched his first world tour, and by 2003, he’d performed five world tours for several million audience members.

Known earlier in his career for the large, grand-stage illusion show… Reamer now focuses on creating a more portable entertaining experience that largely focuses upon the classics of magic and mental manipulation. He is a skilled performer capable of connecting with audiences of all ages.

As Eric Reamer is comfortable on any size stage, all the way down to the CEO's living room for a private holiday party, the technical elements of his show vary from event to event. Upon engaging with Eric, he will provide you with any necessary technical requirements.