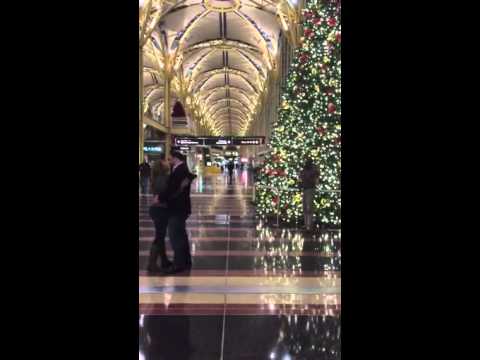 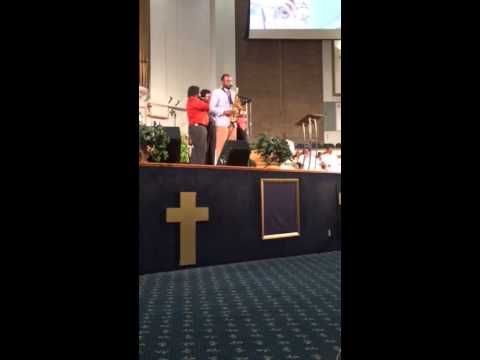 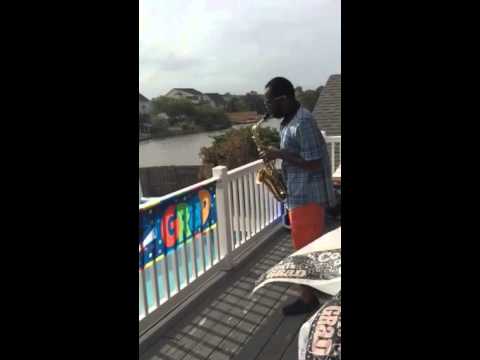 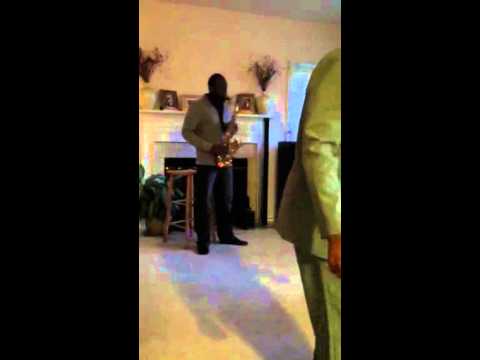 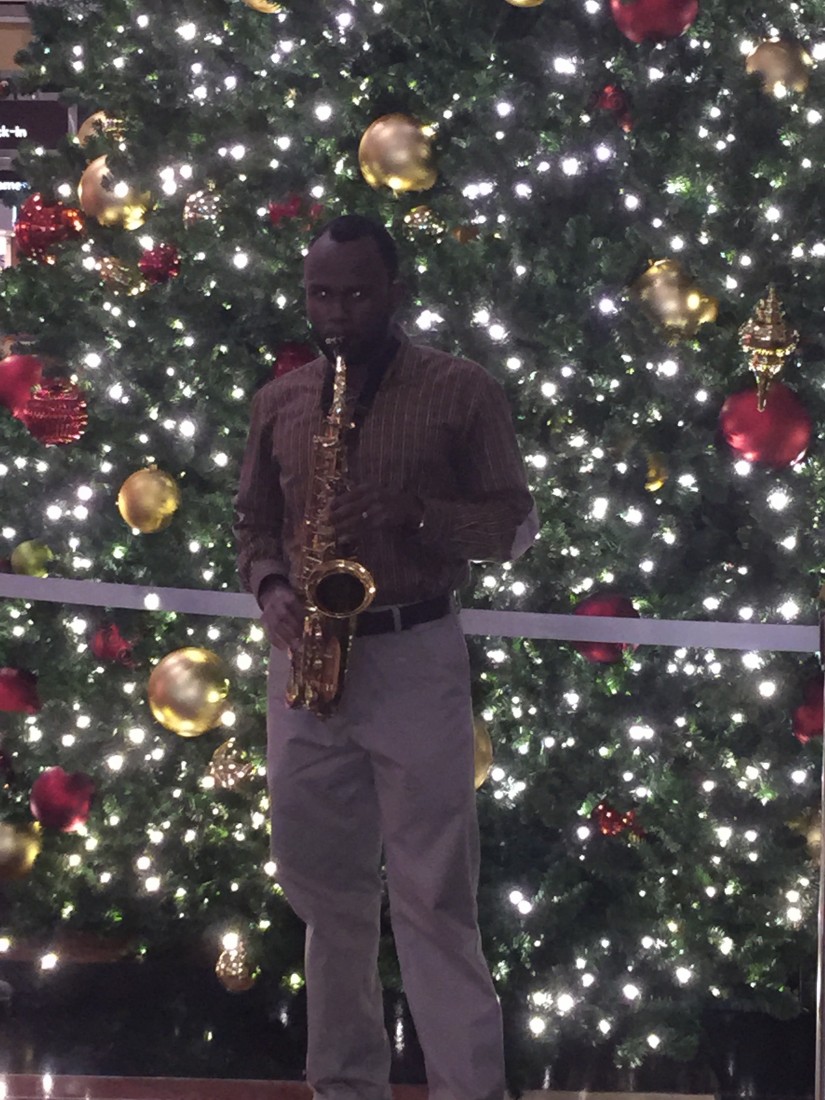 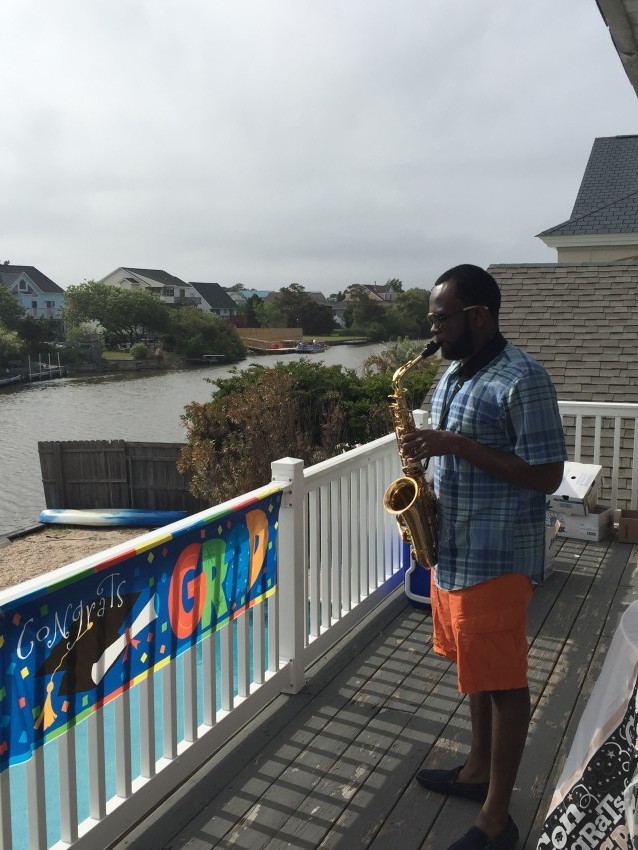 Playing for a Hampton University Graduation 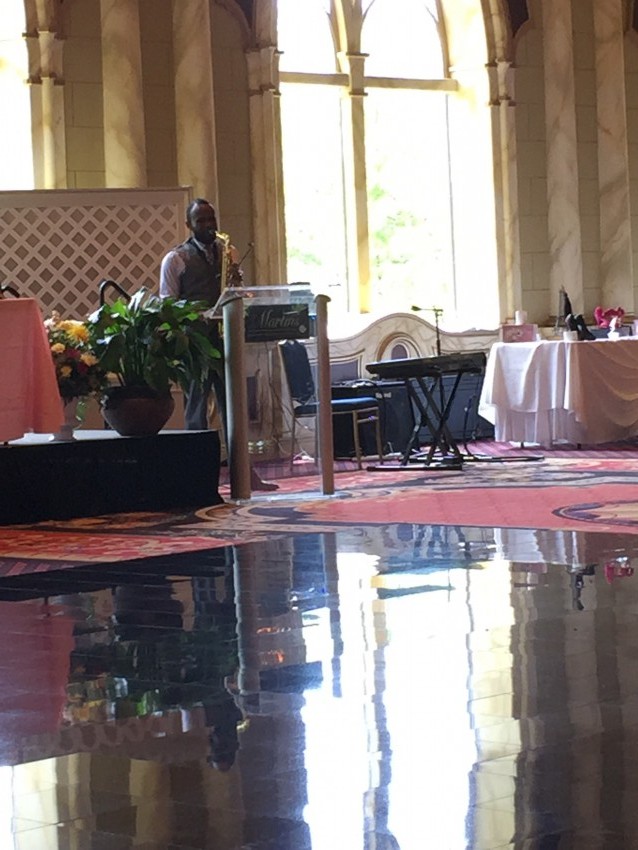 Musical Selection at Camelot at Martins 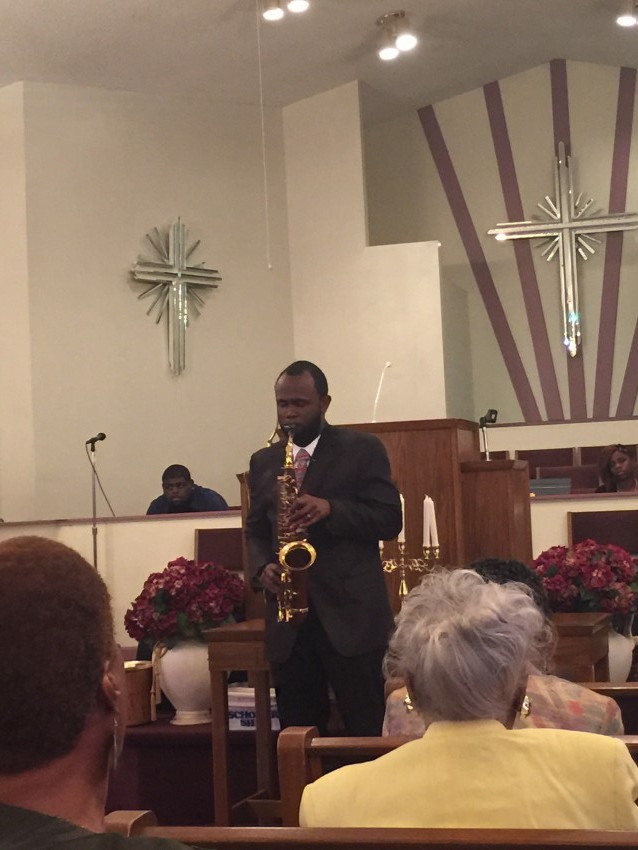 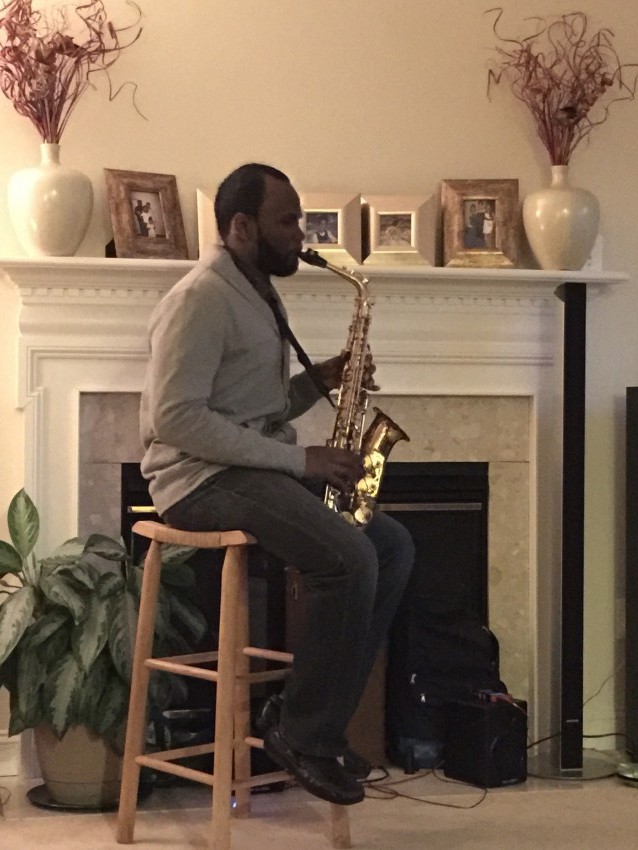 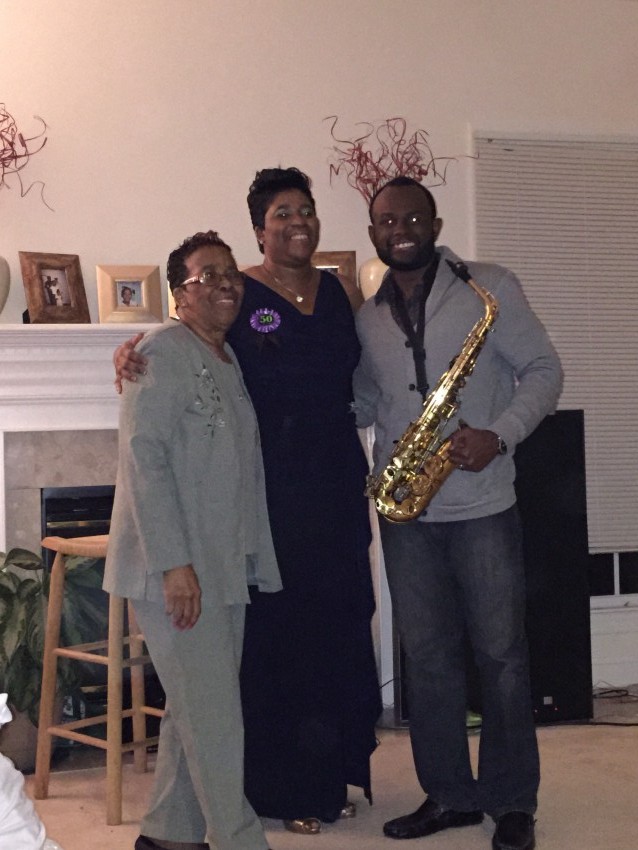 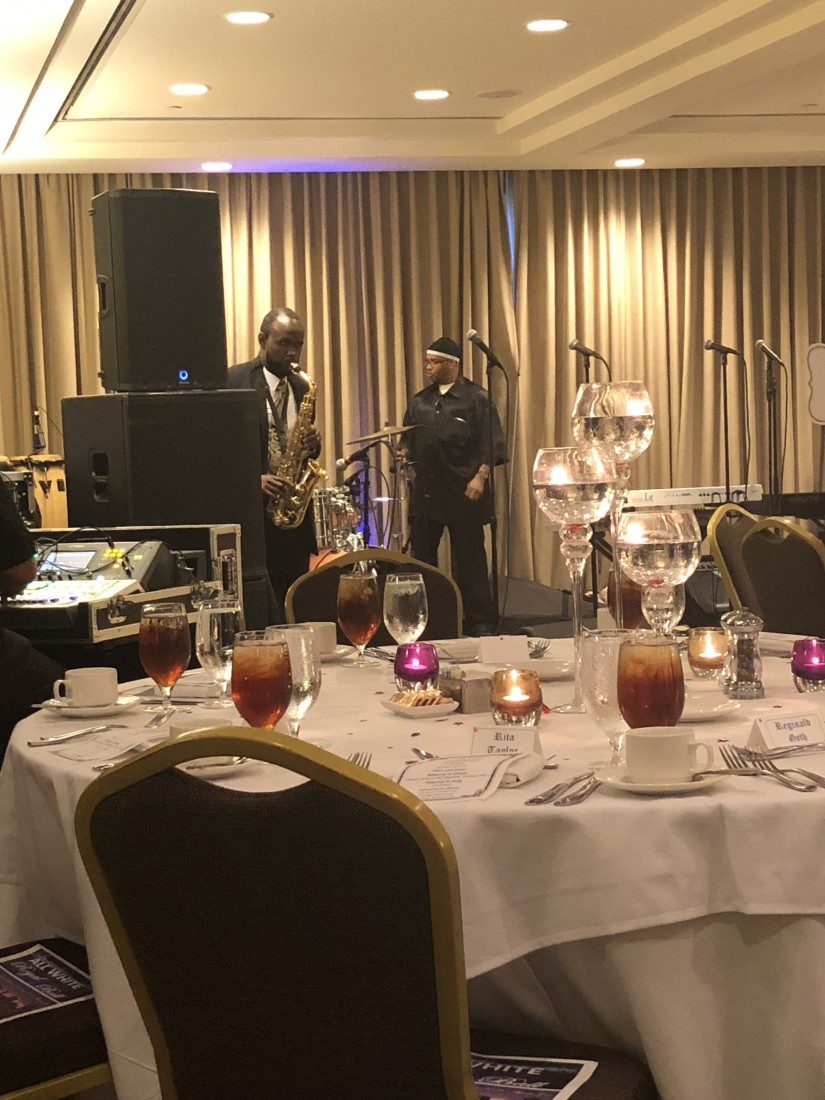 Perform musical accompaniment utilizing the saxophone as necessary for worship services, church programs, engagements, rehearsals, etc.
Assist in the development of music by way of education, and training.

Emmanuel was hired to play at our wedding ceremony and the best word to describe him is amazing! When played “I believe in you and me” everyone had tears! The pastor actually acknowledged how well he played that song. I will definitely use him for my next event!

We had Mr. Jackson at our annual school convocation. He was superb as always. He is always
very accommodating even with last-minute requests. Everyone is still raving about his rendition of
Lift Every Voice and Sing.

Emanuel did an amazing job playing at our wedding. He exceeded our expectations and adapted to changes on the day so well. I also loved how responsive and easy he was to communicate with from the time we booked him to the day of our wedding.

Mr Jackson was timely, professional, courteous, and REALLY, REALLY good at playing the saxophone. So many people during and after the event complemented his performance. I'll definitely use him again for any future events.

Emanuel was great . He was early and played everything we ask , even some that we forgot about. I would definitely use you again.

Overall, he was good

Mr. Jackson played very well. My guests and I enjoyed him very much. My thought is, he would sound better if he had a keyboard player.

The client didn’t request a keyboard player and in addition the client had me stay 30 mins more, since the party was enjoying themselves.

Emanuel was wonderful at our holiday party. He played just the right selection of holiday music mixed with more mainstream and it created such a wonderful atmosphere for our guests.

Thank you Mr. Emanuel Jackson for your professionalism and for treating my guest to the lovely music and melody. We enjoyed your performance and I look forward to working with you in the future.

Mr. Jackson provided exceptional service, communication, and talent for my wedding day. He happily agreed to play "A Thousand Years" for my wife to walk down the aisle and it was a beautiful serenade. We greatly appreciated his time and patience in the booking process.

Emanuel Jackson was prompt, performed current terrific songs and came with a smile. I was quite pleased and highly recommend him!

Excellent service - guest was wow! He was on point with great selections for our guest. Thank you for making our event special. 🙂

Emanuel's performance was just wonderful. He is an amazing artist who was a real blessing.

Emanuel Jackson was professional, prompt, and patience; in addition to being an outstanding musician.
He made my sister's sixty birthday special. He had us all in tears, with the beautiful sound and melody from the saxophone. Thank You!
Dr. Linda Murray

He was excellent. Everyone really enjoyed him. He was also reasonably priced.

Mr. Emanuel did a great job playing the saxophone at my sister's surprise proposal. It was beautiful and we wouldn't have chosen someone else. He was on time and gave his best! We truly do not regret having you at the proposal at all.

Mr. Jackson played saxophone at our company event on a boat on the Potomac. He is an excellent musician, he was very punctual and he provided music for two hours without a break! He walked all over the boat between different levels so everyone could hear him.
We were very satisfied with his service, he made our corporate event truly remarkable.

Mr Jackson was the perfect choice for our fraternity formal. He was timely, personable, delivered the playlist we requested and more! We definitely know who to contact for our next event

We want to say thank you for allowing Mr. Jackson to be your entertainment for your special event. From his manager to you, he enjoyed his time and I am glad that he could meet your needs. Thank you for the review and we look forward to doing business with you once again in the future.

Emanuel was very professional from the first contact. He assisted with the play list and was also very accommodating throughout the planning process and during the event. He was very punctual and delivered a great show. He is an true professional who's information was requested by many guests after the event.

Thanks, what an honor to be apart of your special event. Look forward to doing future business.

I booked Mr.Jackson for my engagement proposal. He was on time and played my fiancée favorite song setting the mood exactly right for my big moment. I would use him again and recommend his services

Put together an excellent concert, and played the saxophone incredibly well. Would recommend Emanuel for any engagement. Will not be disappointed. Definitely worth the time. His dedication and professionalism and out going personality won the night. Thanks for humbling yourself for the college students.

Gospel music has always been a pivotal part of Emanuel Jackson’s life. Born on July 6, 1986 in Baltimore, Maryland Emanuel being one of eight children quickly embraced Christianity and the motivational sounds of gospel music. Evangelist Janice and the late Minister William Jackson had the family rooted and grounded in the church and encouraged them to get involved in extra-curricular activities. Therefore, at the age of 9 Emanuel gained a particular interest in the saxophone and began to take lessons in school. Emanuel was a beginner of course but, with his upbringing he was inspired to begin immediately playing at his church in Baltimore, MD under the leadership of Apostle Julia Williams. Emanuel went on to play in middle school and high school participating in concert band, symphonic band, jazz band and even small ensembles such as sax quartets when necessary.

Emanuel loved to play but, he realized he had a gift from God to be able to impact the lives of people through his passionate performing ability on the saxophone. This without question was Emanuel’s passion so every time there was a church service he was there to minister to the people of God.

Some influential artists that Emanuel looked up to growing up are Israel Houghton, Jonathan Butler and Kirk Whalum just to name a few. These artists also helped fuel Emanuel’s passion even further as he prepared to go off to college.

Emanuel began his undergrad studies at Chowan University where he was a Music Business/Technology major from 2004 to 2009 when he graduated with his Bachelors. Emanuel participated in the concert band as well as the jazz combo where he was featured as a soloist in several University concerts, recitals and showcases. Emanuel studied music in depth which covered music theory, history and other main courses which helped him immensely with the skill of improvisation. With the encouragement of his professors Emanuel took his gift to a new level that he never had anticipated. In addition to the jazz combo Emanuel also was director for the Chowan Gospel Choir for 4 years where he was featured as a soloist for semester concerts and with other Universities such as Elizabeth City State University, Norfolk State University and North Carolina Wesleyan College.

On the other hand, while in college Emanuel was active in the community serving under the leadership of Pastor Arthur Clark of Mount Sinai Church of God. Emanuel served as a musician and also as a youth advisor for summer camps held for the youth ministry at the church.

Emanuel has performed for the stage play “Love Happens,” playwright and Army Maj. Trenia D. Coleman. Emanuel Jackson was heard on Sunday playing the saxophone, when he was asked to play for a Black History Month Event for the Army at Aberdeen Proven Ground on February 13, 2011. He was recognized as the featured artist by the Commander N Chief, and awarded a plaque along with a Commander N Chief pin and coin. Emanuel has also performed with national recording artists Joe Pace, Brian McKnight, Angie Stone, Kirby Brown, Duranice Pace, Fondrea Lewis, Beverly Crawford, Crystal Aiken,and John Boehner's birthday dinner. Emanuel Jackson was selected to play for an organization entitled, “Tiffany’s Circle” affiliated with the American Red Cross. Also, he has played for weddings, funerals, plays, concerts, and other social events.

He continued working with the choirs as a music minister director, the adult praise and worship leader, and a solo saxophonist at Fort Belvoir Gospel Service in 2009-2012. On August 20, 2010 Emanuel and his beautiful wife Jasmine Jackson united as one in holy matrimony and continue to work together in the music ministry as God leads them. They now reside in Northern Virginia. Emanuel and his Wife Jasmine serve as members of the music ministry at Greater Mt. Calvary Holy Church of America under the leadership of Arch-Bishop Alfred A. Owens Jr. and Co-Pastor Susie Owens.

Emanuel in 2012 thru 2013 was a Music Teacher/Choir Director for St. Thomas More Catholic Academy in SE Washington DC. After working for Marymount University at the beginning of 2014-mid year, Emanuel begin his call in the church ministry and to work on his solo project coming soon. He is ready and willing to continue to use his teaching abilities and willing heart to continue to impact children’s lives through music. Emanuel has a versatile background in music and loves to teach the history and background of each genre. As he continues to seek the master, he gains a greater determination to enhance his gift and skills as a professional saxophonist. He continues to educate himself and others as he grows in what he loves to do.

Emanuel has learned that God is faithful and a rewarder to those who diligently seek him. Now he is ready to give the gift that God has blessed him with to make a difference in the world.