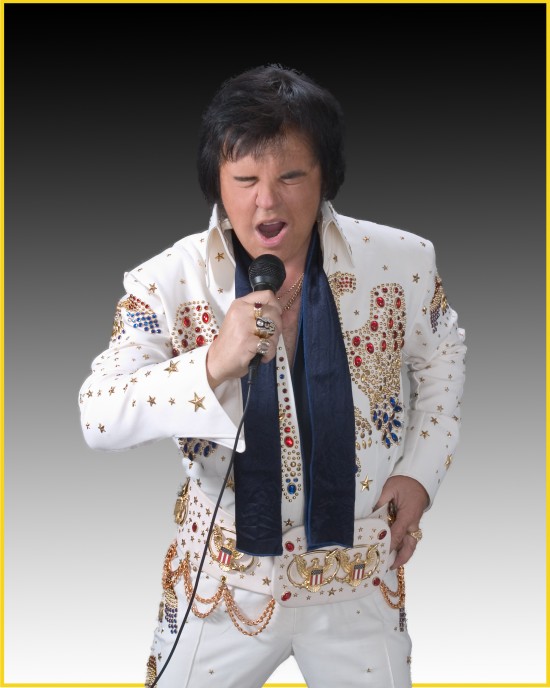 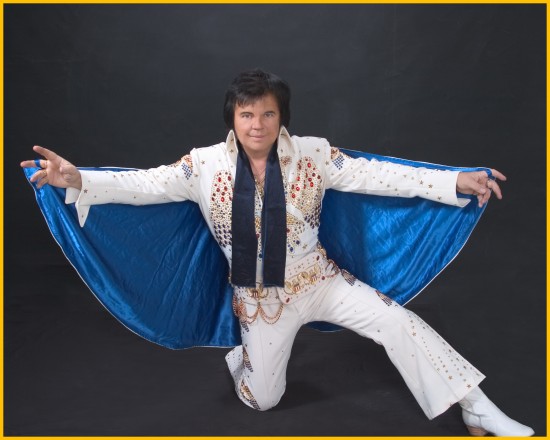 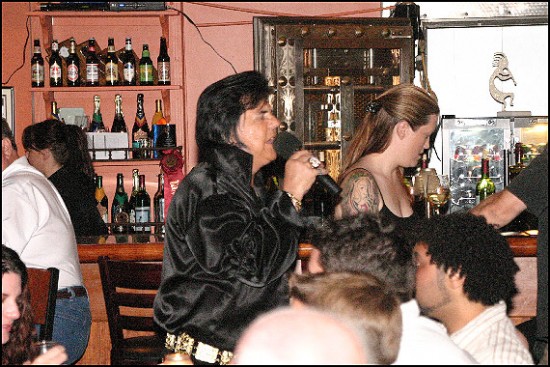 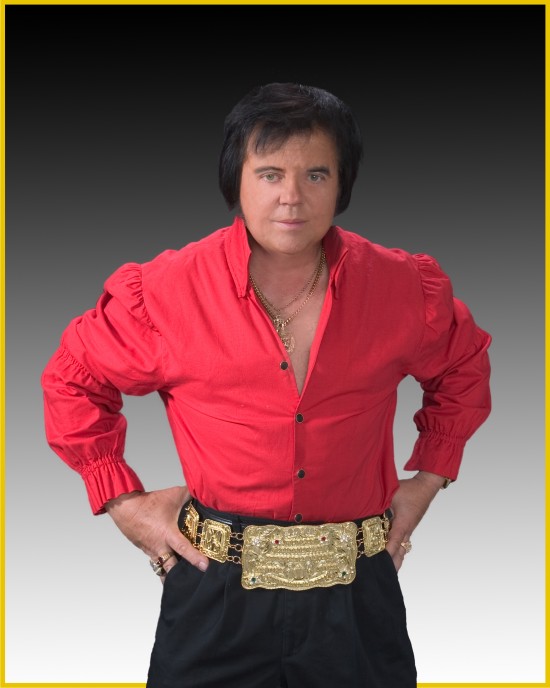 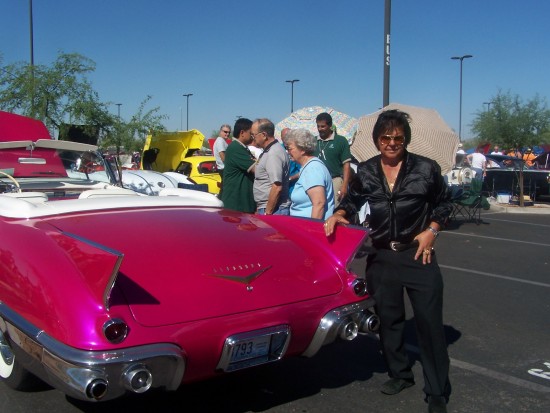 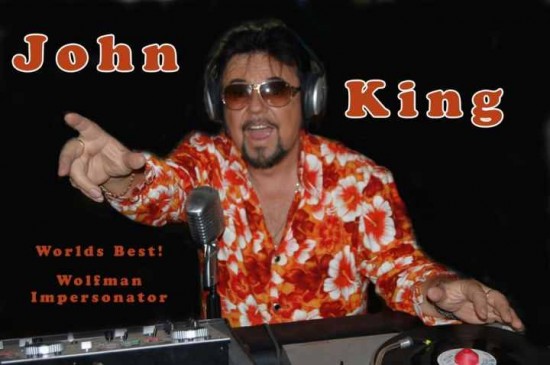 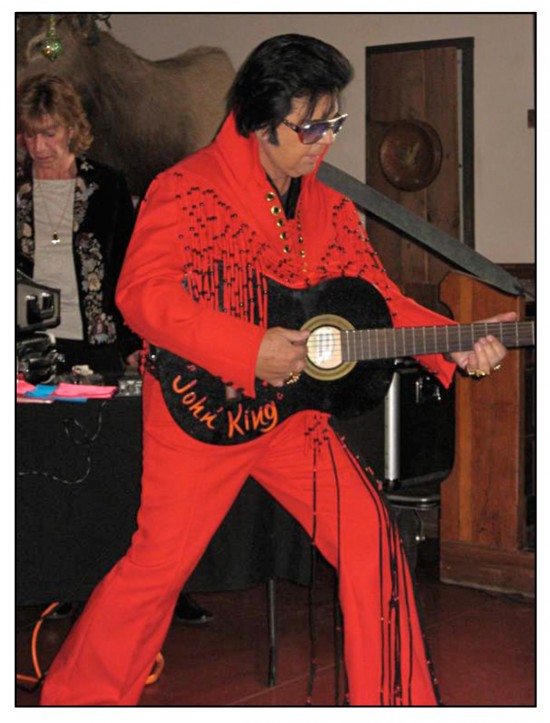 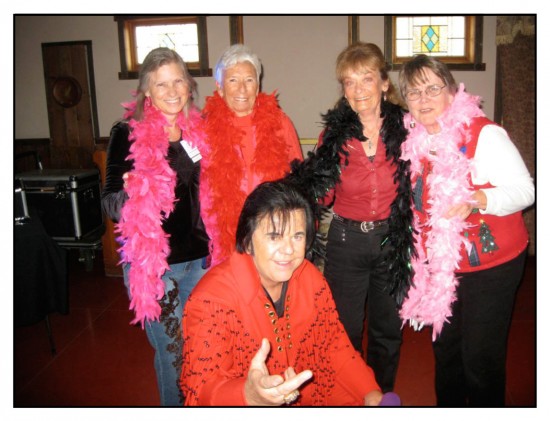 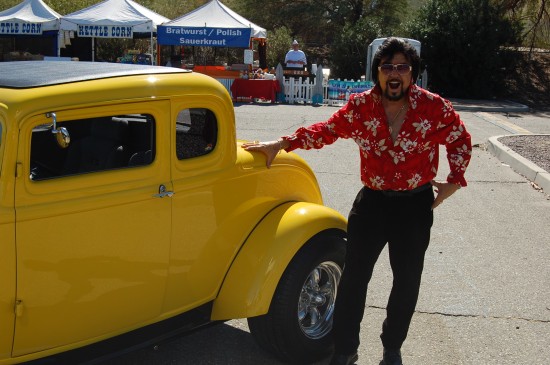 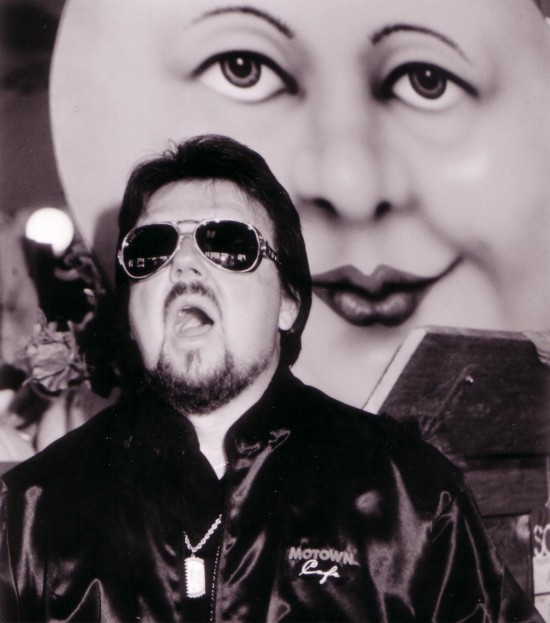 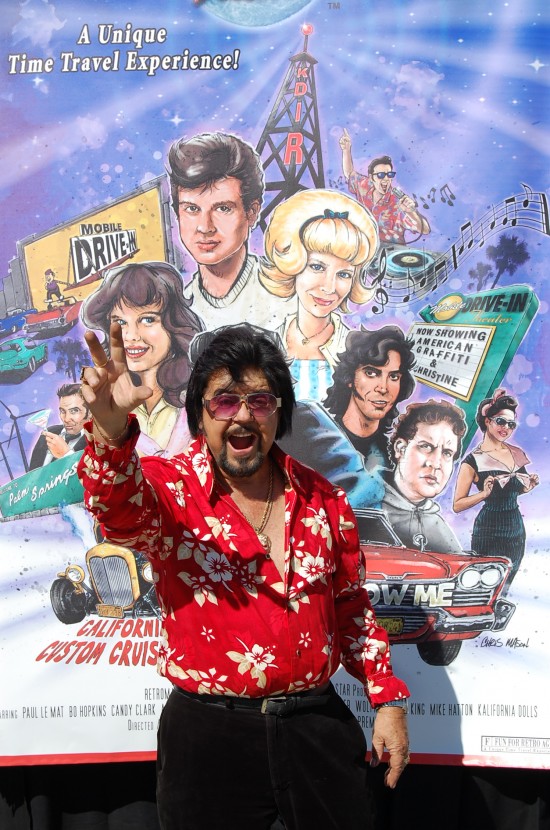 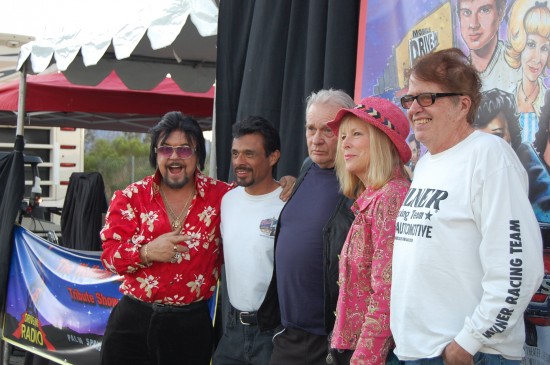 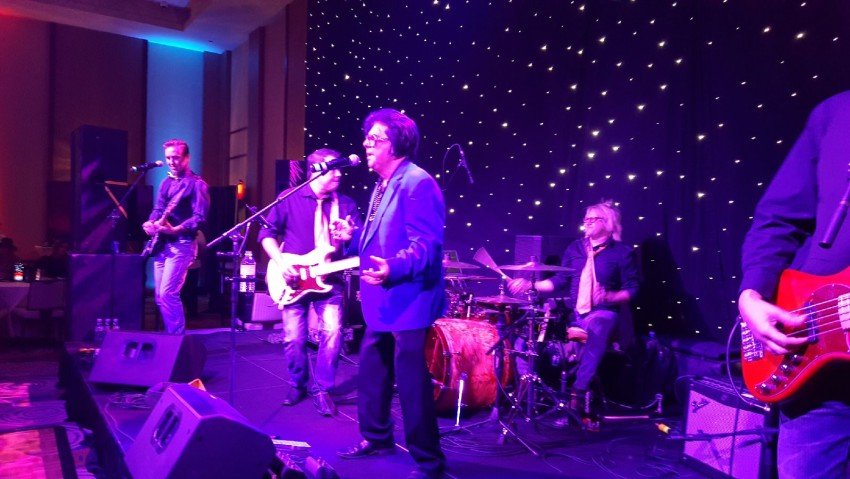 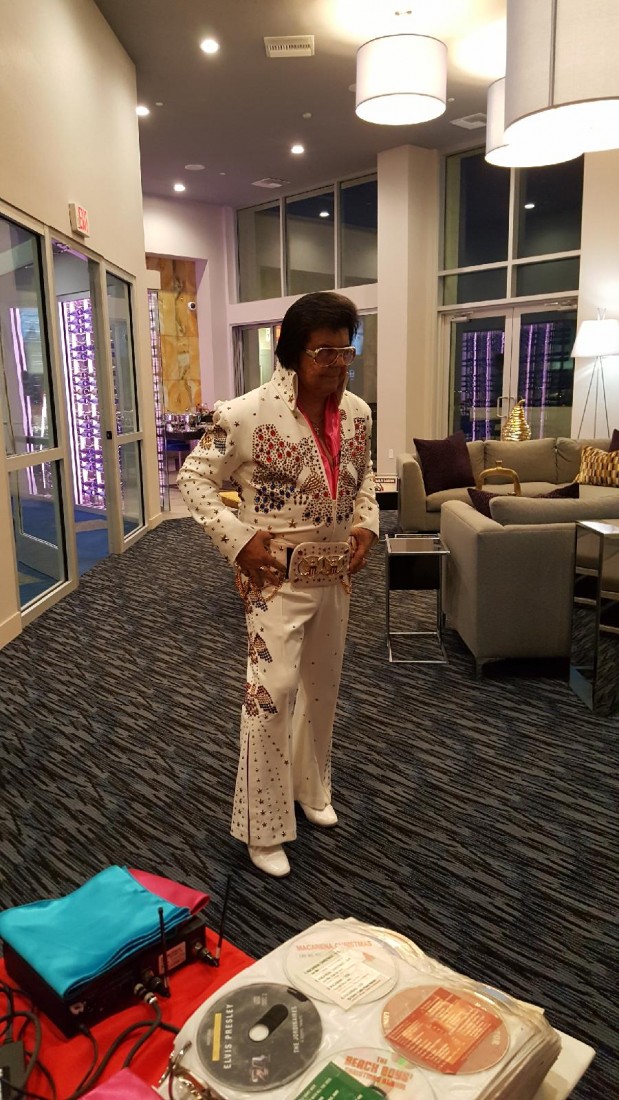 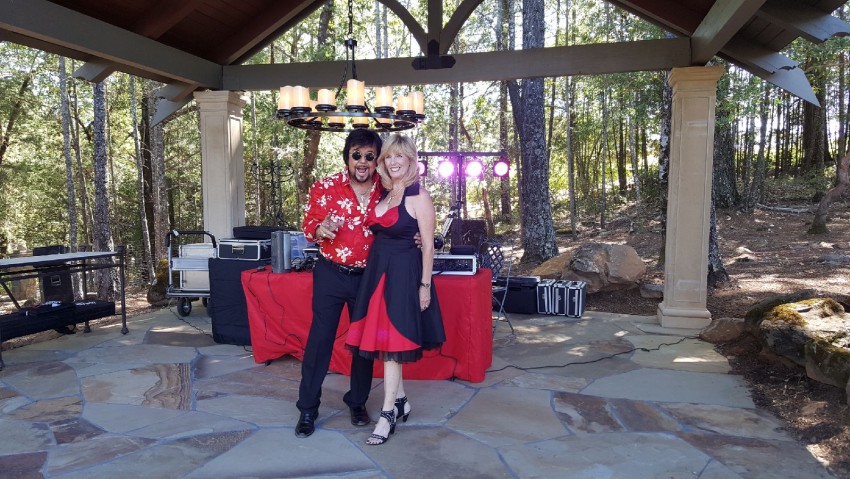 Wolfman and his girlfriend and Napa Valley 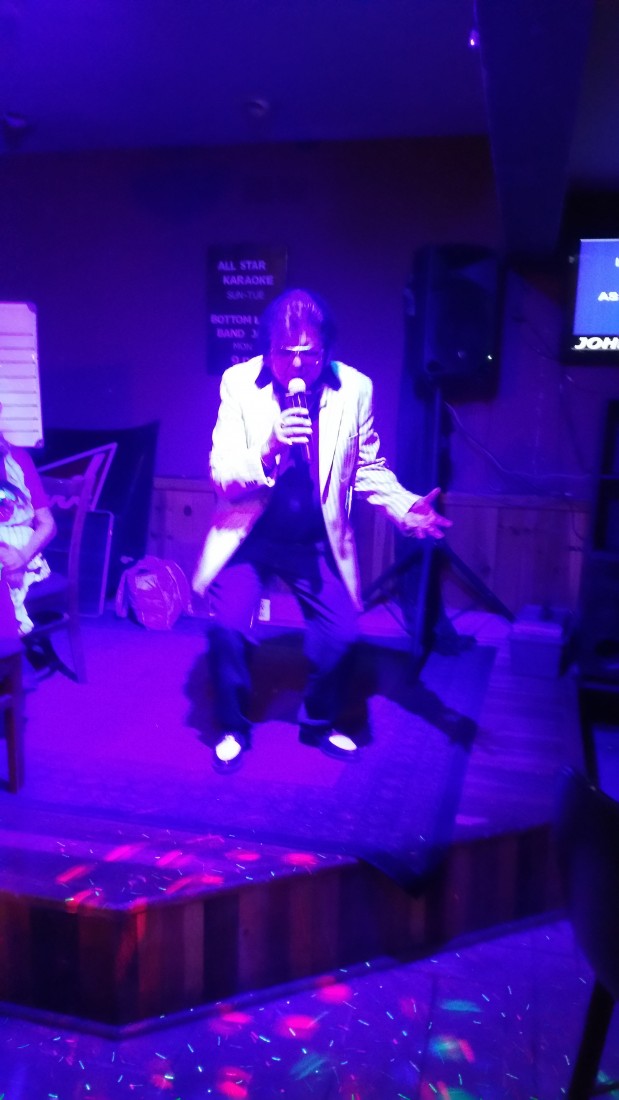 John King from Phoenix, AZ is one of the top Elvis Tribute Artist in Arizona and also a DJ widely known as Wolfman Jack. As a Wolfman Jack impersonator, he is one of the top DJ artists in the Country and is respected and recognized in his accomplishments and awards. John respectfully pays tribute to Wolfman or Elvis with heart and soul. And specializes in the 50's & 60's as Wolfman or the late 60's or early 70's Vegas years of Elvis. John also is a mobile DJ for weddings, car shows and special events.

Although there will never be another entertainer like Elvis, John has definitely captured the mature look and feel of an Elvis concert with a believable voice similar to the king.

He has had the rare privilege of performing with the Jordanaires and has entertained audiences throughout the USA. Additionally, he participates in national competitions and in 2007, he took 1st Place in the Elvis Extravaganza Contest in Las Vegas. Also in 2012 John King was one of the top 10 contender at the Elvis EP Expo in Tucson Az. John is also an ordained minister and a wedding coordinator and could be your wedding DJ for your event.

Elvis entertained for our senior group (average age was probably 70) and everyone seemed to be having a good time and really getting into the show. Obviously, Elvis is of "our generation" so lots were singing along. He pared down the show to time and sound level we needed for our group. John was very accommodating and great to work with. Highly recommend and I hope I can see a full-length show sometime.

The Wolfman was in the house!!

We had a very large American Graffiti themed fundraiser for our non-profit. John was prompt, courteous and helped out in any way that he could. His act was spot-on for Wolfman Jack and it provided lots of laughs and entertainment for the night.
He went above and beyond to help out with any announcements we needed and played a great set of music to get us in the mood!!
If you need a professional and all-around nice guy, don't hesitate to give John a call for your next event!!
Matt D. PS CA

John performed for my wife's 60th surprise birthday party. He did a fantastic performance which was enjoyed by all. The women will never be the same, they loved him. Thanks again for making her birthday an unforgettable one.

Our venue was a little different from most. We are a skilled nursing facility and the people that live here are octogenarians +. I spoke with our residents after the show and they had nothing but great comments. They felt it was the best entertainment they have had while living here. Due to the graciousness of "Elvis" towards our residents, we would not hesitate to have him return again.

"Elvis" performed at our closing banquet/awards ceremony and the women LOVED him! He was very good! Sounds just like Elvis and he's very personable and plays the role to the hilt! We will definitely keep him on file for another event!

Elvis made Mom's 80th Birthday such a special day.

We hired Elvis for our parents 50th Wedding Anniversary. He did such a great job. My parents loved it. He sounds like the real thing and his moves are just as great.
He is very quick to respond to your emails and phone calls. He keeps in touch with you during the planning process. He is very easy to work. Would love to work with him again.. Thanks for the beautifull menories!

He is amazing! Looks and sounds just like Elivs. I saw him preform at the Sliver Spur and would go see him perform again.

Not only did I hire this man for my wedding, he was so great we hired him for our New Years Eve party! He is amazing! Not only does he look just like Elvis, I couldn't tell the difference in his voice from the real thing. And that's saying a lot since I am a huge Elvis fan. I have also seen him perform over the years at many venus. Cocomo Joes, South Beach, and The Silver Spur. Each time he left us wanting more. At my wedding, he even changed costumes and had a completly different set of songs. After both parties, my friends had him perform for their events and loved it!! I would highly reccomend hiring this performer, you will not be dissapointed in the quality of his art, but also in his professionalism.

Band or Tracks can be used at your concerts. For information, drop a line.

E.T.A's at Elvis E P expo. It's a contest held each year for other Elvis impersonators. I'm able to brush up on my skills and learn new ideas and techniques from other Elvis tribute artists.