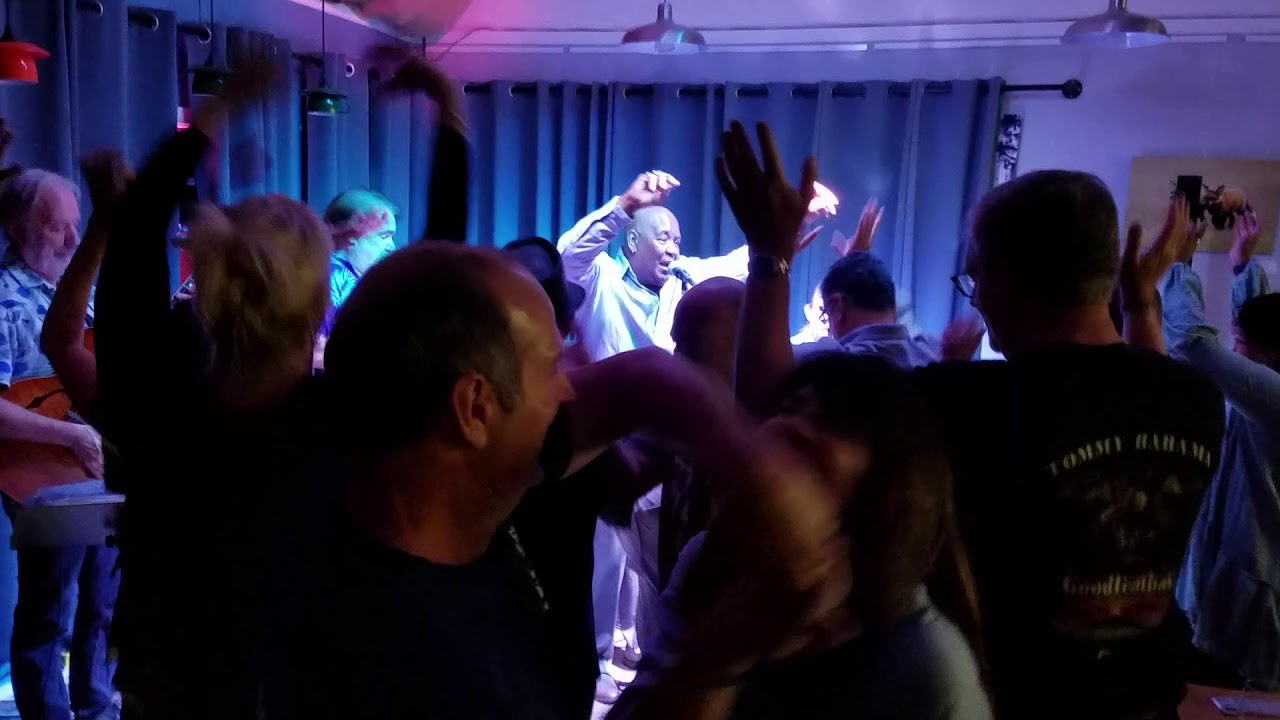 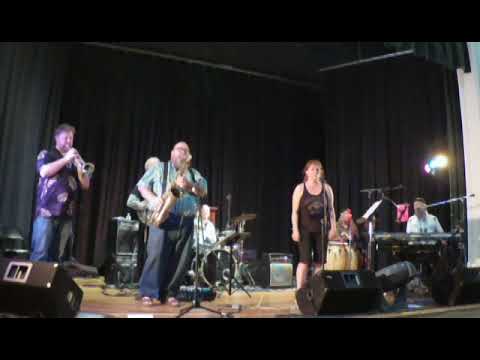 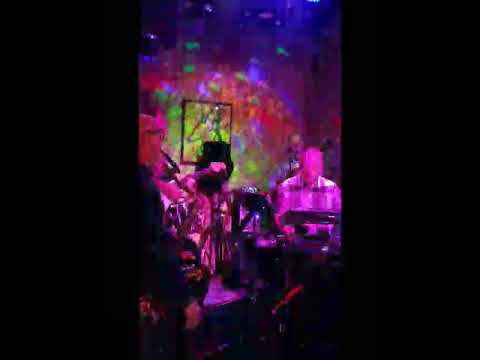 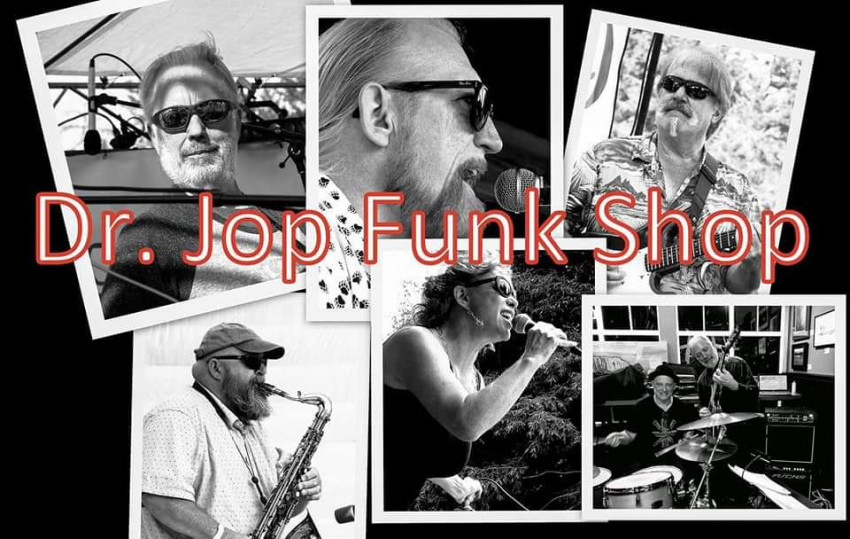 Dr Jop Funk Shop is one of the PREMIER Dance/Party Funk Bands from the Northwest. They play many of your favorite funk, R&B, Rock & even some country covers that features the plethora of styles they can emulate. Several in the band sing. With the variety of singers in their pool, they can cover any dance/party/wedding needs and are super fun to party with and dance to. Note too, that this is NO ORDINARY BAND. Funk Shop is comprised of world class musicians who can play and/or sing literally any music. In addition EACH individual is an amazing musician and entertainer in their own right. They are not only fun to dance and party with, but their awesome musicianship is AMAZING to listen to.

Be the first to review Dr Jop Funk Shop

If you are ready to put on your dancing shoes, OR IF YOU PREFER to listen to great musicianship and singing, you are in for a big treat. This band LOVES audience participation, dancing, partying, and high energy performance. "Getting your event going is the bottom line of what one will expect from Dr Jop Funk Shop." People cannot sit still once Funk Shop starts playing. The party begins and does not end till the last note.

These are serious professional musicians AND entertainers ready to cater to your needs. They strive to make your event EPIC, so it will be unforgettable and talked about for years.

This is one of Seattle/Tacoma’s Premier Bands. They perform for standing room audiences in venues around the Puget sound region. With 20 to 30 years of performing experience each member, they also perform for corporate party and wedding events. They pride themselves in “One Stop Shopping” for any event! Funk Shop understands the needs of corporate and wedding party events and has a huge pool of entertainers to choose from one up to 3 vocalists, and up to a full horn section, depending upon the clients wants/needs. They can also accommodate any budget through flexibility within their configurations. Their following includes musicians and avid music enthusiast’s alike. With great musicians with top notch equipment, execution, precision, passion, and emotion, their audiences are begging for more which is apparent by nightly STANDING ROOM ONLY events and Standing Ovations. Each musician has their own influences that culminates to create this tight and uniquely amazing band’s sound.

W MICHAEL “Dr Jop” JAAP – keyboard, vocals, bass, comedy, & leader
Michael is an American Career Musician/Entertainer known by his peers as a “Musician’s Musician!” Mike has performed for standing ovation audiences since the beginning of his career. Being a 1st call studio musician, he has been requested by jazz greats Eddie Harris, Stanley Turrentine, Ernie Watts, Larry Coryell, Chuck Bergeron, etc.
Mike has performed and recorded with such blues and R&B legends as Jonell Moser, Elvin Bishop, Lee Oscar, B.B. King, Robert Cray, The Temptations, The Neville Brothers, the "Godfather of Soul" James Brown and more. He has remained at the forefront of the Seattle music scene performing/recording with such great bands as Danny Ward and Reality, Alive and Well, Dr. Funk, Darren Motamedy, Michael Powers, Korla Wyagal, The Reputations, which featured the legendary performances of Kurt Kolstad, Tim Scott, Rich Dangel and Denny Goodhew, and hundreds more.
Mr. Jaap owns Jopier Music Publishing ASCAP, and Jopier Studios which he has produced several albums and soundtracks for video including the PBS award winning Over Washington & Over New England. He has also logged thousands of hours in other studios while recording/engineering/producing and composing for film, commercial jingles, and published works for artists including Jack Rice, Michael Tomlin, Bob Krinsky, Korla Wygal, Michael Powers, Darren Motamedy, Jade Williams, Lightrider, and etc. etc.

PETE KIRKLAND – vocalist
Pete is a sensational vocalist/entertainer, being one of the few in the Pacific Northwest of this caliber. He has captivated audiences from around the world by his powerful dynamic personality, performance and God Given Talent.
Pete’s career began at age 13 playing drums for bands in Germany. By age 16, he evolved as lead vocalist in a soul band revue that traveled the Florida and East coast. With professional experience of over 30 years, Pete’s passion to entertain has been felt by audiences the world over. Crowds young and old are dancing to his emotional performances generating standing ovations everywhere he appears.
Pete has shared the stage with Millie Jackson, Al Hudson, Slave, Chuck Jackson, Sky, Norman Conners, and many more.
Mr. Kirkland’s influences are Luther Vandross, Peobo Bryson, Marvin Gaye, Stevie Wonder and Donny Hathaway.

EMILY MCINTOSH – vocalist
Performing & Recording Vocalist, Pro Session/Jingle Singer, Voice Over Artist, & Vocal Coach, is an indisputably gifted Vocalist whose voice is listened to and celebrated worldwide. From wailing Soul and Dance to timeless Adult Contemporary, Edgy Pop, Hip/Hop, Smooth Jazz and Sultry R&B, Emily is a unique, true and diverse Vocal Talent.
Being a successful, world class, Performing/Recording Artist she has many accolades to her credit. She has opened for Soul Legend Al Green and she has even performed "Cruisin Together" with Huey Lewis. (see it on Youtube). You may also find on her on stage singing with The Tropics band or her own solo shows.
This Cornish College of the Arts Cum Laude Grad has performed as a Soloist and Group Member at Festivals, Casinos, & Clubs for over 20 years. In addition to Vocal Coaching from her Woodinville Studio, she is busy making a living as a Session Singer, singing hundreds of Radio ID Jingles that air world-wide. Perhaps you've heard her singing the Love Song Show Jingle for "Delilah" or The WOLF (in Seattle & Portland). Emily also contributed her talents to "Super Smash Bros. Brawl” singing "Ashley's Theme" for Nintendo Wii. More info at her jingle site: (link hidden).

NIKI COLEMAN – vocalist
Niki’s professional career started at age 16 via acquiring a driver’s license. She has developed a VERY soulful vocal approach along with her own AMAZING style. She can also emulate her influences like Chaka Khan, Natalie Cole, Bonnie Raitt, Aretha Franklin, etc. She sings with heart and you will feel her soul.
She has performed and toured with several Northwest groups including but not limited to, . . . . . She continues to amaze standing room audiences and is one of the few Premier Vocalist in the NW.

JOHN “Morty” MORTON – guitar, comedy
John is a life-long career guitarist and composer. Morty’s experience ranges from world touring to recording and writing music. This includes decades of performing in the vast studio world as one of THE top-call session musicians.
john has played with the likes of Abraham Laboriel, Carlos Vega, Jimmy Johnson and Don Grusin. Creatively mastering a wide variety of musical styles, John has recorded with artists including (but not limited to) Randy Meisner (Eagles), Boy Meets Girl, Sheena Easton, P.F. Sloane, Michael Tomlinson, Dan Dean, Tom Collier, Danny O'Keefe, The Brothers Four and more “Indy” albums than he can remember, ALONG WITH writing/recording literally thousands of commercials as well as movie scores and tv shows.
John's electrifying guitar performance has moved live audiences with such shows as Legends in Concert and Teatro ZinZanni Seattle and San Francisco, while also performing with artists such as Thelma Houston, Francine Reed, Sally Kellerman, Joan Baez, Darlene Love and Ann Wilson from the band Heart.

GARY CROOKS – guitar, vocals
Gary has been an active member of the Northwest music community for over 30 years performing locally and touring abroad. As a performing musician Gary toured with The Shirrels and Jimmie Rogers. He has worked as a sideman with Bo-Diddley, The Diamonds, Johnny Ray, and Dorothy Lamour. He has toured for The Department of Defense performing in over 25 countries entertaining our troops abroad at UN bases, and has worked with numerous local artists including Little Bill and the Blue Notes, Apricot Brandy, Alive and Well, Wayne Simon, Red Kelly, and many local area jazz groups and “Big Bands.” Currently Gary performs primarily with “Dr Jop Funk Shop”, and a new local 17 piece jazz band out of Gig Harbor “The Night Gig” which features a number of amazing musicians that some are also music educators.
As a studio engineer, Gary has been owner operator of Bell Street Records for 20 years. He has recorded CD’s for many local artists including Mom’s Rocket who was the designated KJR rock band and recorded several soundtracks for Seattle Seahawks. He has collaborated with studios in Los Angeles and New York on projects for local jazz artist Danny Ward, and Nathan Breedlove for the Skattllites project. He is currently working on a CD of original compositions.

JIMMY “Greasy” PRIBBENOW – saxes, vocals
Jim’s career started in Tacoma as a session and club musician. He performed with many great local artist's including Little Bill and the Blue Notes during his brief tenure. While on the road, he fell in love with Nashville while playing there. His decision to settle in Nashville Tennessee was greatly rewarded as he performed/recorded with all the Premier musicians on the East Coast circuit. There are just to many to list, but some of those include Don Wass, Deborah Allen, Delbert McClinton, John Hall, Steve Cropper, Donald "Duck" Dunn, Warren Hayes, Tommy Tutone, John Prime, The Four Tops, The Temptations, etc. etc. He has also appeared on countless recordings and published film works, including his own jazz project under his own name entitled 'Low Flying Cattle, live at The Swiss...'