3.5
(2 reviews)
Get a Free Quick Quote
Add to Favorites

Disco Inferno is a 9 piece group that specializes in the great sounds of the Disco era. The group can perform in 70's costumes or without deopending on your event.

What an energetic, fun show they put on!

I just went to their show on the shore in Greenwich, CT, and this band had everybody dancing and singing along. They took me back to my high school disco days and good times. Don't let some bitter rivals turn you off, these guys were worth the 1/2 hour drive. They were terrific!

NOT a good Disco Band

Disco Inferno is nothing but a cheap imitation of the area's original and still going strong disco band: The One And Only All-Star Dyn-O-Myte Disco Review.

Disco Inferno tried to duplicate the same energy and fun that the Dyn-O-Myte Disco Review has been bringing to Connecticut for fifteen years now, but have fallen well short.

Bigger isn't necessarily better. Even though they have a horn section, the little that it adds doesn't make up for the weak singing, especially the lack of harmonies and back-up vocals, which make The Dyn-O-Myte Disco Review stand out from most bands as a truly world-class musical act.

This band is so tacky, that they even ripped-off the Disco Reviews website, word for word, in their introduction. Go to each band's website and see for yourself!

And compare that to this:

This is blatant misrepresentation to try to con you into thinking that this band is on the same level of professionalism that the Disco Review is. In fact, Disco Inferno has only been in existence for TWO YEARS (originally as Disco Fever, this band is basically Souled Out in afros and with a girl singer), and NOT the nine years that their website claims.

But the only sure way is to see and HEAR for yourself. If you ever get the chance to attend shows by both bands, you will clearly see that Dyn-O-Myte Disco Review is by far the superior product.

Joseph S. said “Red Velvet Sounds performed at my nonprofit organization's 10th anniversary last night. They were outstanding in every way, and exceeding the high expectations…”

Allison G. said “You guys did a fantastic job with all our requests. I know its not usual for wedding bands to cover latin music along with your current repertoire. It…” 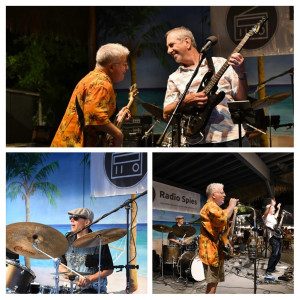 Dance music for clubs, parties and private functions. We are Radio Spies, uncovering the best dance tunes for your event. Motown, Soul, Disco, Classic Rock, and…