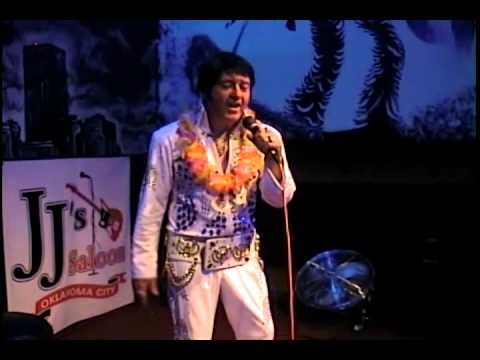 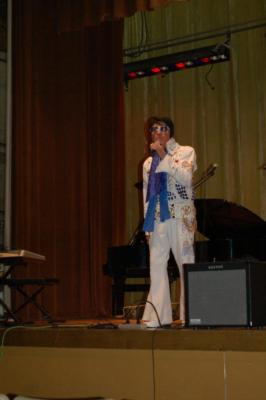 I do events where I show up in the same costume as the one worn in the Aloha Concert with all the beads rhinestones and chains. I perform shows with authentic backing tracks of the Elvis songs recorded in the 50's through the 70's. I have performed all around the state of Oklahoma. This Elvis has performed in The Senior Follies at OCU and OCCC, Sooner Theater, The Will Rogers Theater, The Oklahoma History Center, The Western Museum and National Cowboy Hall of Fame, Opening Night at the Cox Center, The Gaillardia Country Club, as well as The Oklahoma City Elvis Extravaganza at the State Fair.

Our room had a PA problem. Del handled it nicely. Then we had a great show !!

Elvis in the house!

We had a great time and enjoyed the show.

It was perfect.
He did an amazing Job. He was on time, kind, considerate. Perfect sound. Thank you so much for making this party amazing. God bless you.

The Last several years I have had the opportunity of
entertaining audiences through a variety of events and venues such as.
Oklahoma City Festival of the Arts, Edmond City Chamber of
Commerce, Will Rogers Theater, Sooner Theater of Norman,
Carriage House for the State Fair, Oklahoma Women's
Sate Flower Club Convention, National Cowboy Hall of Fame Opening Night at the Cox Center,
and numerous private events such as, benefit auctions, wedding
receptions at the The History Center, the golf club at The Gaillardia Country Club, as well as churches and living (link hidden)c.
I have also performed in two plays. Played on stage with a former Miss America at OCU and at the Triple C Performing Arts Center with a former governor, both sponsored by the Bobbie Burbage Lane foundation and The Senior Follies,

Growing up in Western Oklahoma, I was influenced by
Elvis, Ricky Nelson, Roy Orbison, and Sam Cook.

Performances can be done as small as in home locations to larger business rooms and even outdoor locations.

The songs may change from event to event. I try to do most of the popular songs of Elvis from the 1950's through the mid 1970's. I try to have enough songs to cover from 40min. to 2hours. I have been known to take requests if I have the music and know the song.

I have 15" Two Way speakers, a powered mixer that can produce a 1000 watts of out put, wired and wireless mikes and the sound tracks for all shows.

I also have a smaller system for smaller locations