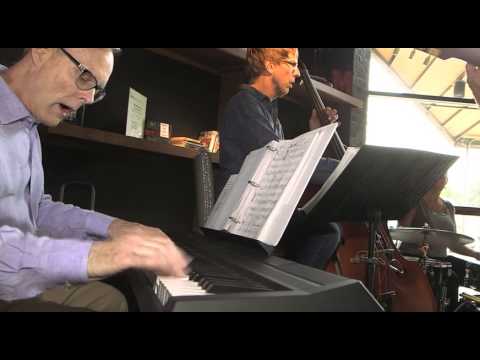 THE DAVE LUNDIN JAZZ TRIO - “Real Jazz for Real Jazz Lovers”
“With piano, guitar, bass and drums, we passionately interpret the music of Miles, Coltrane, Monk, and Parker along with Gershwin, Porter and other classics from “The Great American Songbook.” Our hard bop, ballads, blues and Latin tunes make up the perfect sophisticated music for your special event.” Featuring Dave Lundin on piano, Keith Malinowski on bass, and Karen Tomalis on drums. References include numerous local clubs, country clubs and special events. Can upgrade to quartet or quintet upon request.

They did a great job. They were there on site on time and played just what we wanted.

Clients can expect a reliable, on-time start, followed by 'real' jazz classics by composers like Miles, Coltrane, Parker and Monk played passionately and with consummate professionalism by some of the area's best musicians. We can focus on swing, be-bop, ballads, blues or Latin based on your preference. If appropriate, I will publicize our performance to increase your attendance. We take minimum breaks and always give our all for each and every performance.

• PIANO and Leader: Dave Lundin – Dave has studied jazz piano for decades in the Detroit/Ann Arbor area with some of the best local jazz artists, including those at the University of Michigan, Wayne State and Oakland University. His major influences are Bill Evans and Wynton Kelly. He is very excited about his new group which he views as his best yet.

• BASS: Keith Malinowski – One of the most sought after jazz bassists in the area, Keith has played all the major Detroit venues, including Baker’s and Bert’s Marketplace with Detroit’s best jazz artists including the likes of Marcus Belgrave and James Carter. He leads his own successful group, the Vinyl Underground and teaches bass in the area.

DRUMS: Karen Tomalis – Playing professionally since the age of 13, Karen graduated from Wayne State University in 2005 with a BA in Jazz Studies. One of the most popular drummers around, she has played at Detroit’s leading jazz venues like Baker’s Keyboard Lounge and the Detroit International Jazz Festival with Detroit’s best jazz artists, including sidemen from the Art Blakey and Count Basis bands. She cites as her major percussion influences Richard “Pistol” Allen and Elvin Jones.

All we need is a power outlet, we supply the rest.

DAVE LUNDIN
JAZZ GROUP
REPERTOIRE
SWING
Bye Bye Blackbird
Foggy Day
Four
Gone With the Wind
Have U Met Miss Jones
How High the Moon
Impressions
Jeannine
Joy Spring
Lullaby of Birdland
Milestones
My Favorite Things (3/4)
Satin Doll
So What
Take the ‘A’ Train
Tune Up
You Say You Care
BALLADS
All the Things You Are
Alone Together
At Long Last Love
Autumn in New York
Autumn Leaves
Blame It On My Youth
Blue in Green
Blue Moon
But Not for Me
Easy to Love
Here’s That Rainy Day
I Can’t Get Started
I Could Write a Book
I Remember You
I Should Care
I Thought About You
I Want to Talk About You
I’ll Take Romance (3/4)
I’m Glad There is You
I’m in the Mood for Love
In a Sentimental Mood
Isn’t It Romantic
It Could Happen to You
I’ve Got You Under Skin
I’ve Never Been Love B4
Just Friends
Long Ago and Far Away
Love For Sale
Moonlight in Vermont
My Funny Valentine
My Romance
Naima
Never Will I Marry
Polka Dots & Moonbeam
September in the Rain
Softly – Morning Sunrise
Someday Prince (3/4)
Speak Low
Spring in Here
Stella by Starlight
Summertime
Tenderly
There Never Be Anthr U
These Foolish Things
The Way Look Tonight
What’s New
When Sunny Gets Blue
Where or When
You Go to My Head
You Stepped Out Dream
Younger Than Springtime
BLUES
All Blues (6/8)
Bags Groove
Billie’s Bounce
Birk’s Works
Blue Monk
Blue Trane
C-Jam Blues
Equinox
Freddie Freeloader
Mr. PC
Now’s The Time
Straight No Chaser
Trane’s Blues
Unit 7
Walkin’
Watermelon Man
Work Song
LATIN
Afro Blue (3/4)
Besame Mucho
Black Orpheus
Day by Day
Girl From Ipanema
Green Dolphin Street
I’ll Remember April
Invitation
Little Sunflower
Nica’s Dream
Poinciana
Samba De Orfeu
Shadow of Your Smile
Song For My Father
Star Eyes
St. Thomas
Tin Tin Deo

The Dave Lundin Jazz Trio has been influenced by the best in classic jazz including Miles, Coltrane, Monk and Parker. More specifically, Dave Lundin has been impacted by the great Bill Evans and Wynton Kelly in addition from taking lessons from jazz teachers at the University of Michigan, Wayne State University and Oakland University.

We just need a power outlet and enough light to read music. We can play indoors or outdoors, your preference.