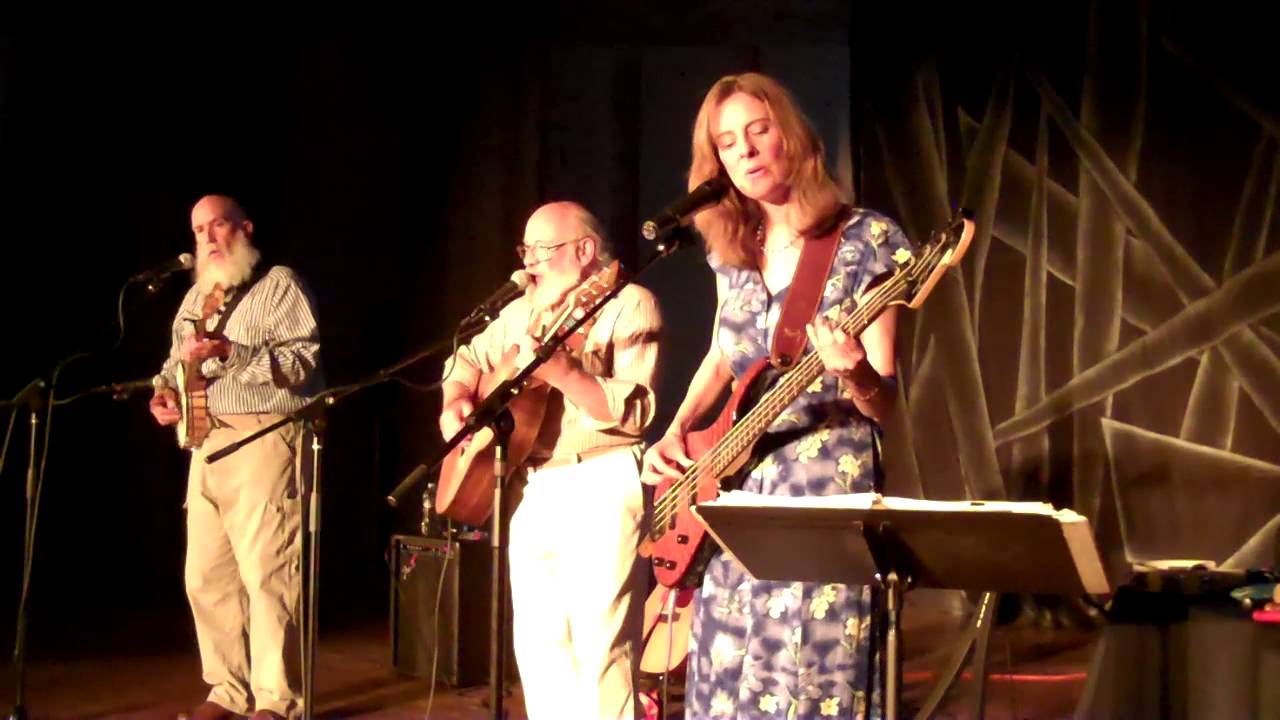 Julie Thompson and David HB Drake as "Sweet Survivor" lead those good old songs we grew up on. These anthems from the days of "make love, not war" still resonate today. "Blowing in the Wind" is a "mighty wind" of classic folk music memories for the over 50 "boomer" audience and for younger people as well. These are not "protest songs"... rather it is music that affirms the positive message that shaped our lives from a time we thought we could change the world...and did! The power and honesty of these songs span the generations.

Be the first to review Dangerous Folk

"I have worked closely with Dangerous Folk recording a recent CD and have enjoyed their music many times as individuals and as a group. They are all highly professional singers and musicians and together give a great performance, and their love for the music they sing radiates from the stage to the last seat in the audience."
~Steve Butts (of The Highwaymen), New York, NY

"The audience was beaming as they left - complimenting the performance and how much they enjoyed hearing the "songs they knew!"
~McComb/Bruchs Performing Arts Center, Wautoma WI

"The best of all the performances we’ve had here!"
~ Eastgate Manor, Algonquin IL

"You guys were wonderful! Perfect for our setting"
~New Richmond Heritage Hillside Series

Thank you so much for putting on such a great performance for Earth Day. People loved the tribute to Pete Seeger and singing along to familiar songs. Dangerous folk sounded great!
~Julie Enslow, (link hidden)

"You folks are dangerous- your songs speak to our hearts and minds"
~Sandy Lewis, Audience member

Julie Thompson and David HB Drake lead those good old songs we grew up on. These anthems from the days of "make love, not war " still resonate today.
.
"Blowing in the Wind" is a "mighty wind" of classic folk music memories for the over 50 "boomer" audience and for younger people as well. These are not "protest songs"... rather it is music that affirms the positive message that shaped our lives. The power and honesty of these songs span the generations.

"Sweet Survivor" is a project of Organic Arts Ltd.
A 501c3 non-profit educational organization based in Milwaukee, Wisconsin.

The original “Dangerous Folk” trio was created in 2003 when retired school principal Eldon “Cap” Lee contacted Milwaukee folksinger David HB Drake to create a CD giving voice to teacher concerns over the “No Child Left Behind” legislation. The result was “No Child Left Behind? – Bring back the Joy” which has received national attention for the quality and honesty of the music.

Vocalist Julie Thompson was brought in for the recording to add a woman’s voice and direct the children’s chorus. The sound of David, Cap and Julie singing together lead David to bring them along for a concert at The Coffeehouse, Wisconsin’s longest running folk venue, where he was recreating his set list from his first appearance there back in 1969. During the concert when Julie mentioned she was acting in a production of “Most Dangerous Women,” an audience member shouted “You’re Dangerous Folk- you sing songs that make people think!” and Dangerous Folk was born. The trio has performed at festivals, concert venues, for elders, and community music series, including opening for the Kingston Trio.

Doug Esty joined the trio on banjo, bass, and guitar in 2013 when Cap moved on to North Carolina.
Doug retired in 2019, so the music continues with Julie and David as a duo.

Julie and David carry on the tradition of folk music once considered dangerous enough to change people’s minds, and it has. A half-century later, this music has become part of the fabric of America and our national identity.

We can use your sound system. We need 2 vocal and 2 instrument mikes on boom stands and an input for electric bass. (Think “Peter, Paul & Mary” set up- diagram attached)

We can bring our own sound system and need one electrical outlet. Please check that it is working before we arrive! NOTE: If we're performing outside, understand that this is folk music and we have a small (coffeehouse) system. Someone sitting 100 yards away will have trouble hearing us – our answer is: "move closer".

"Blowing in the Wind" with Dangerous Folk is a sing-along concert of those stirring songs that we all remember from Peter, Paul, and Mary, The Kingston Trio, Pete Seeger, Joni Mitchell, Bob Dylan, John Denver, Phil Ochs, Woody Guthrie and more. Sampler DVD available on request.

We fit into a 6 x 12 foot space (less if necessary), bring our own equipment if you don't have any, but DO ask for shelter from the sun and rain. Our instruments ( and bald heads) need protection!