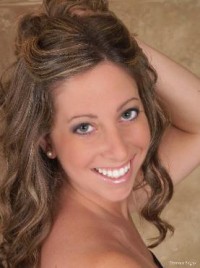 A soprano soloist who has sung in multiple languages including German, French, Italian, Latin, and Swedish. Classically trained as a lyric soprano for over 12 years, she brings grace and elegance to all of her performances. She has an extensive repertoire ranging from Opera to Broadway. Although primarily a wedding soloist, she is open to other religious ceremonies and special events as well. She holds a Bachelor of Arts in Vocal Performance and is currently obtaining her Master's in music education.

Be the first to review Classical Female Vocalist

A beautiful performance with the elegance and grace of an angel. Her singing evokes emotions that are felt by all of her audience members. Her voice is pure, connecting listeners to each note she sings. Her range is extremely versatile and she is always open to suggestions.

Elisabeth was born on July 20th, 1985 in Toms River, New Jersey. She has enjoyed performing for her family and friends since the age of four. She began taking lessons at the age of ten and quickly developed her musicality. She participated in the summer vocal camp at Shenandoah Conservatory at the age of fourteen and received the award for "Best Vocalist" at the Festival Competition in 2000. She also appeared as a guest artist at several local churches for holiday concerts as well as participated in the several school musicals. She participated in the Toms River Idol in 2003 and was voted "Best Vocalist" by the judges. "I cannot believe such a sound can come from such a young woman," commented one of the judges from the competition. Since then, Elisabeth has pursued a Bachelor of Arts in Music with concentrations in vocal performance and music management at the University of Delaware. There, she studied voice with Professor Daniel Cole, and was a member of the University of Delaware Chorale under the direction of Dr. Paul Head. With this group, she worked with several great conductors including David Amato, Joseph Flemerfelt, and Simon Carrington. She appeared as Donna Anna in Don Giovanni in 2005. She graduated in 2007 and pursued a career in the music industry by working first at Platinum Sound recording studio, and then at The Harry Fox Agency. She is currently living in Brooklyn, and is entering her second year of her Master's program in music education.