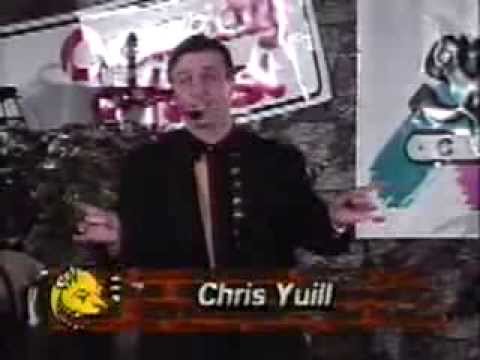 "Off the Wall" Comedy Special 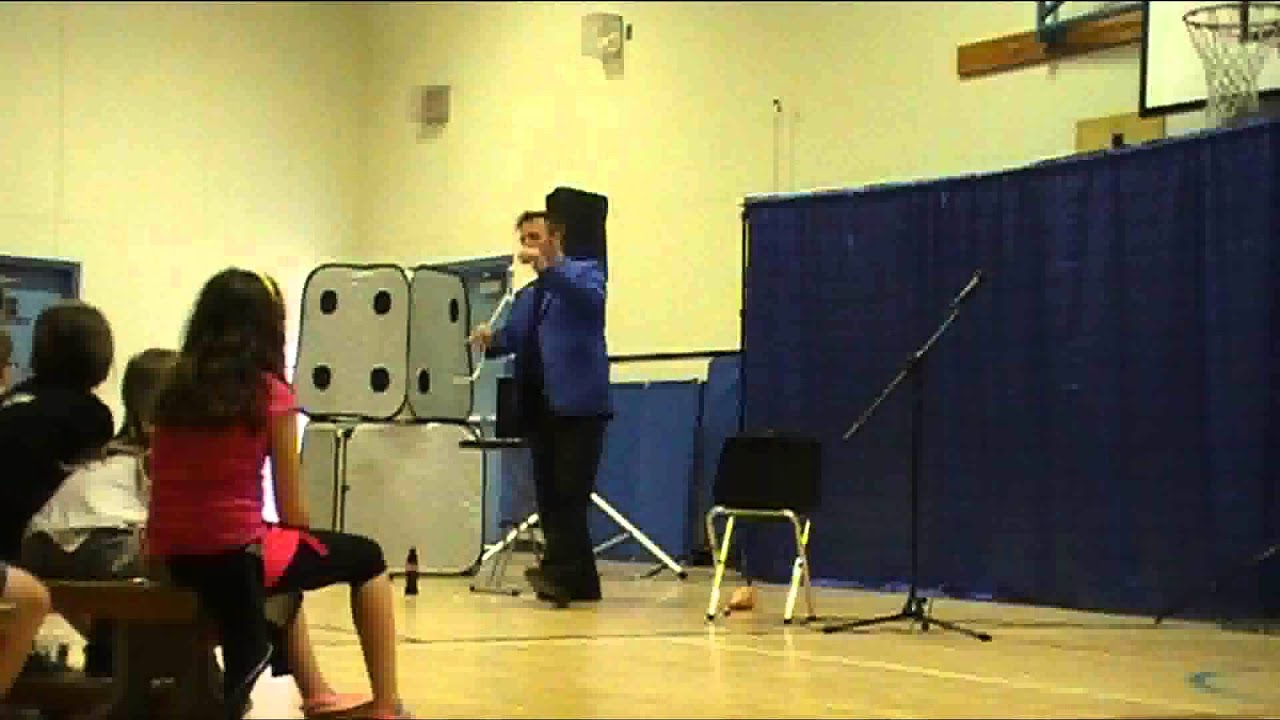 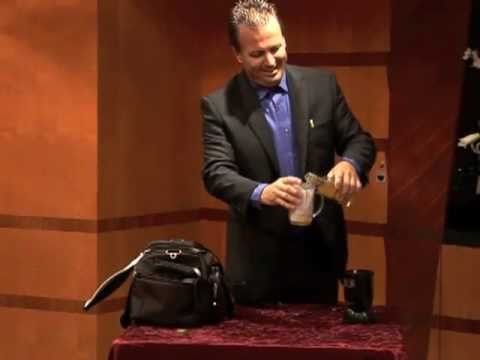 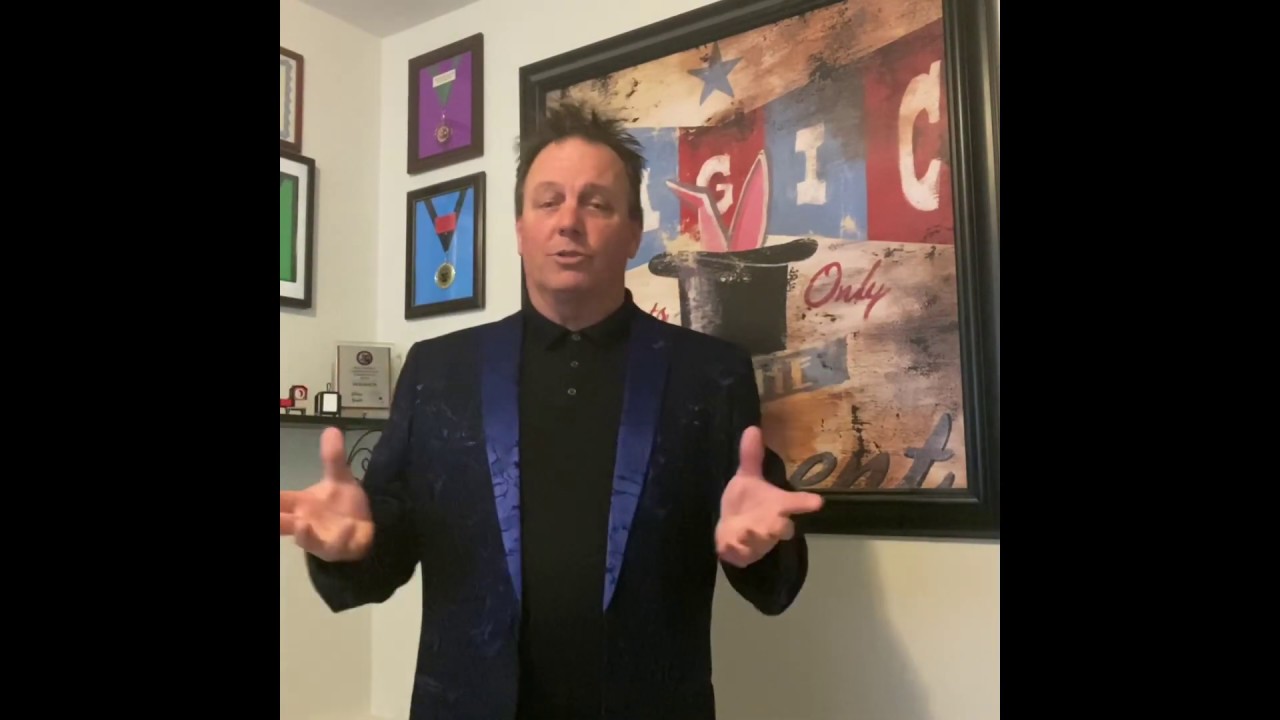 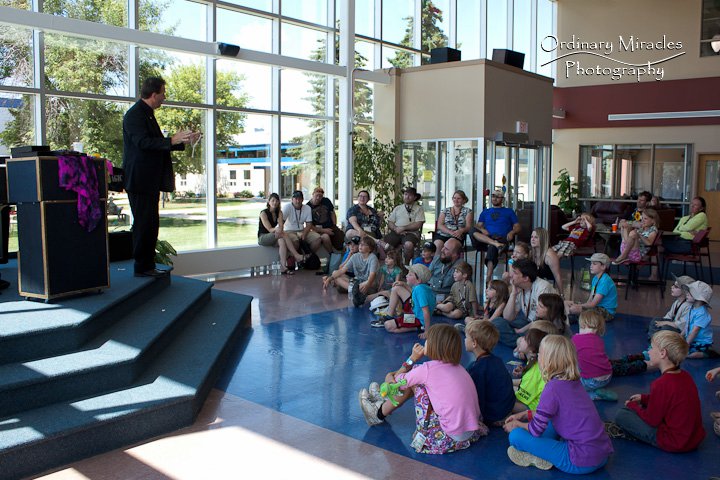 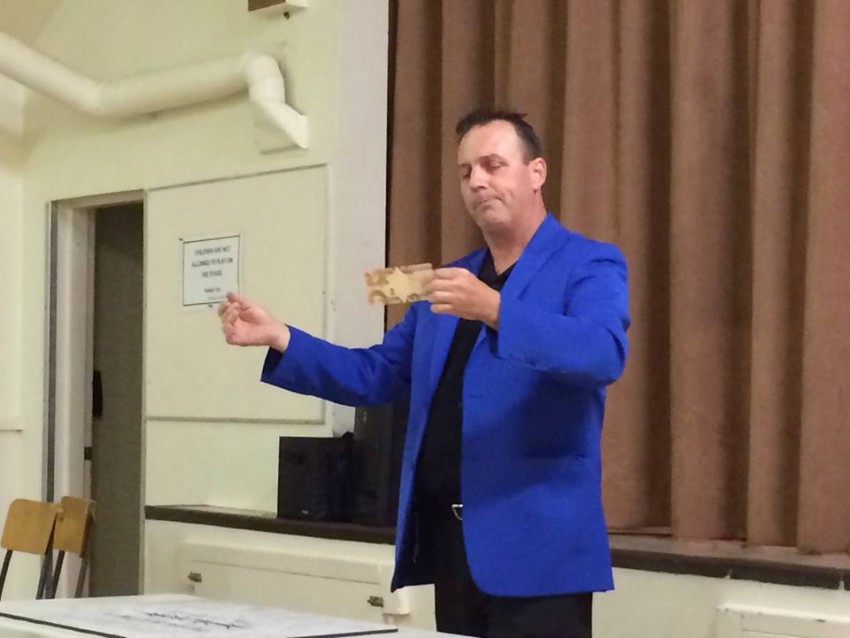 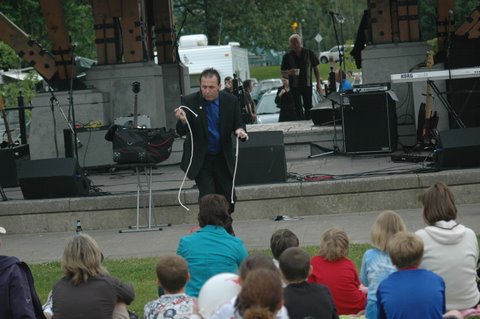 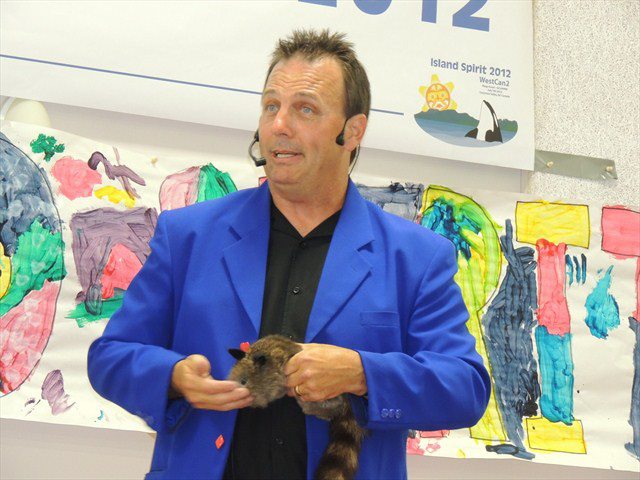 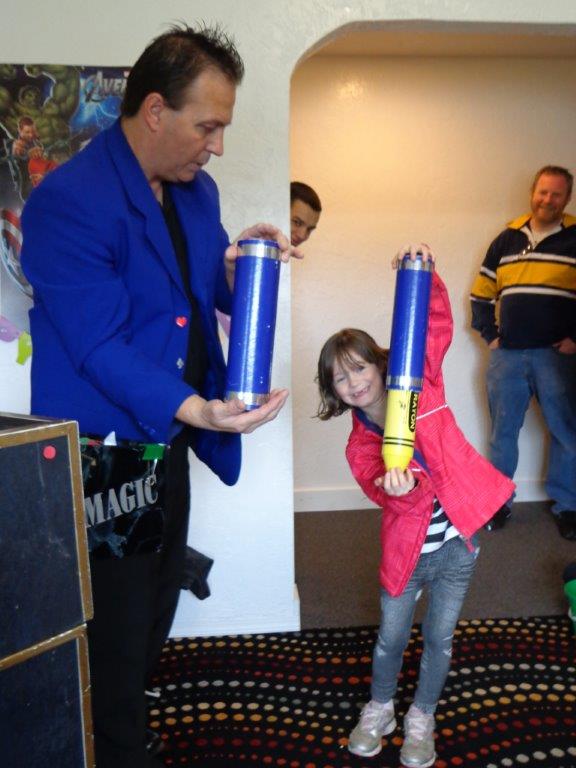 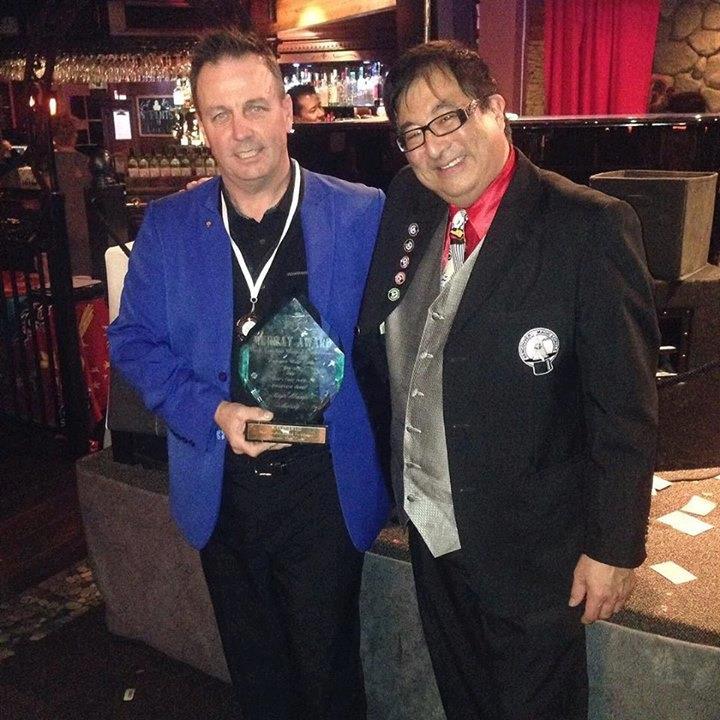 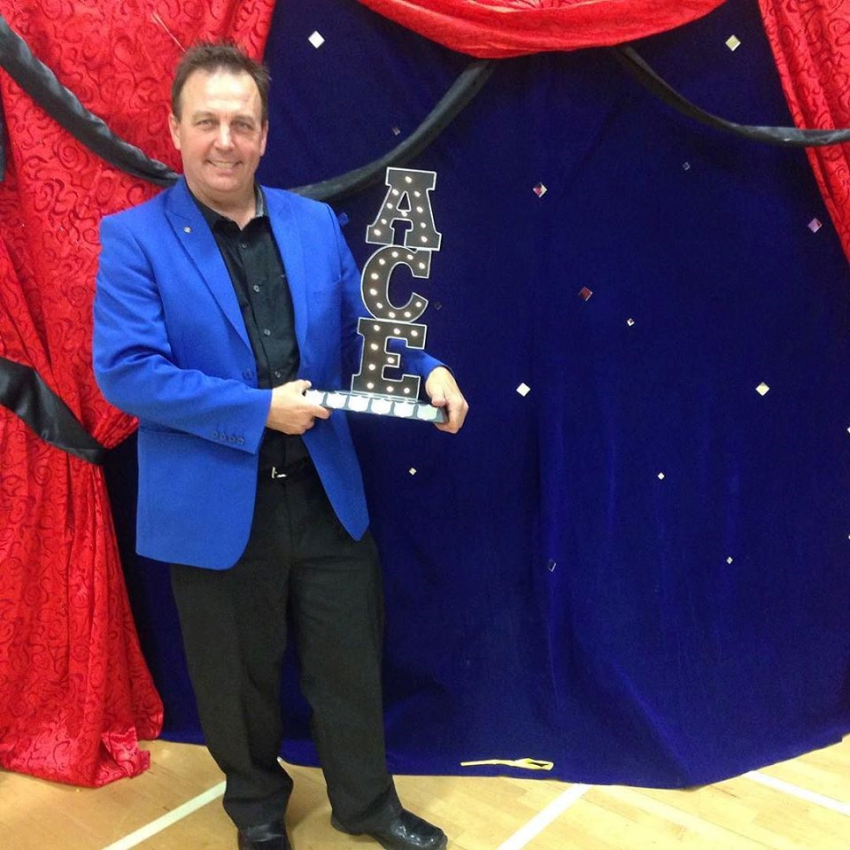 Childrens Magician of the Year 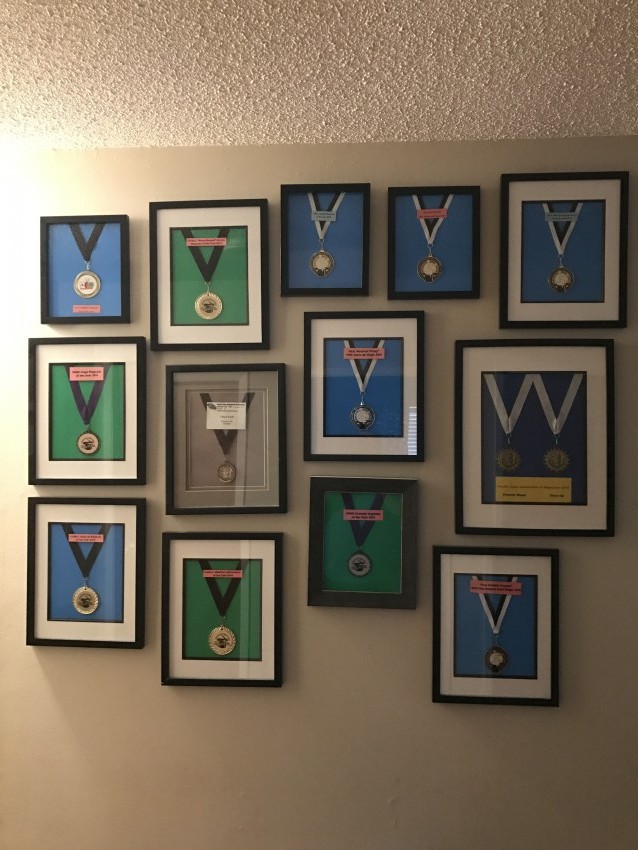 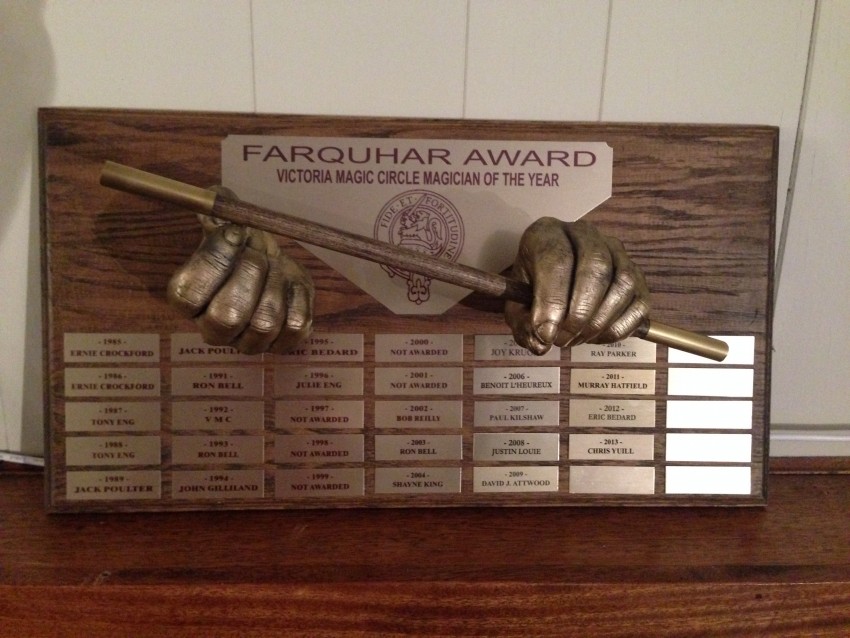 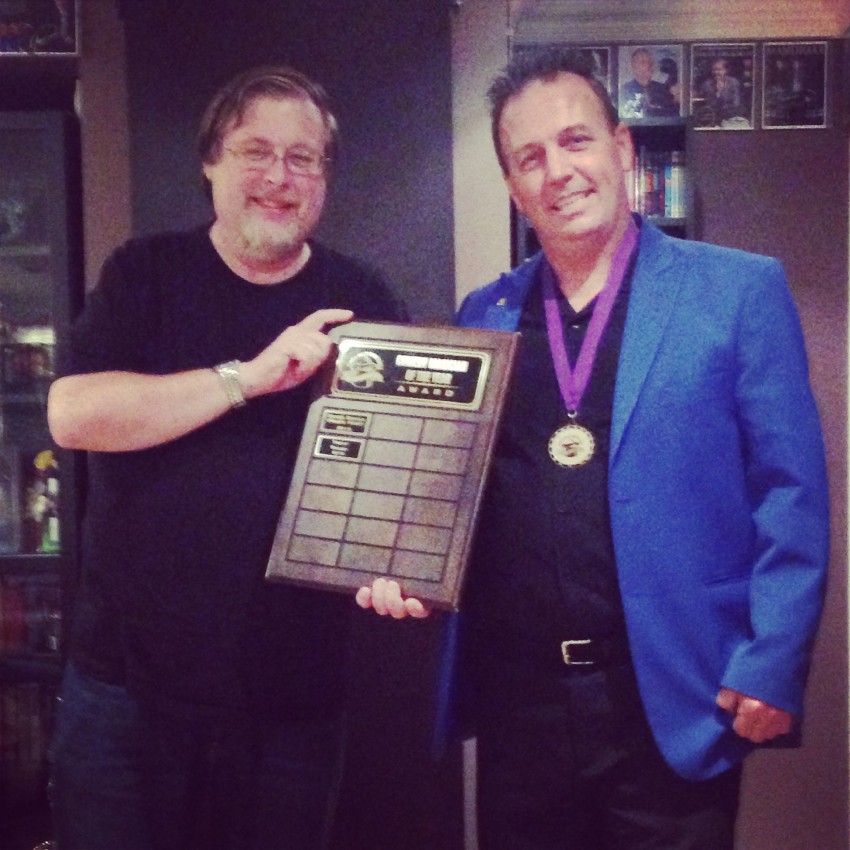 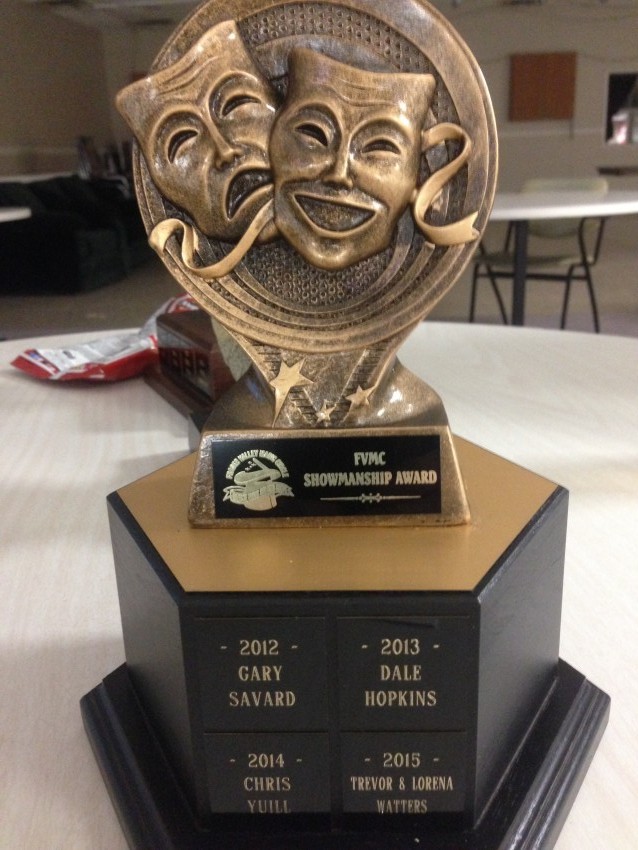 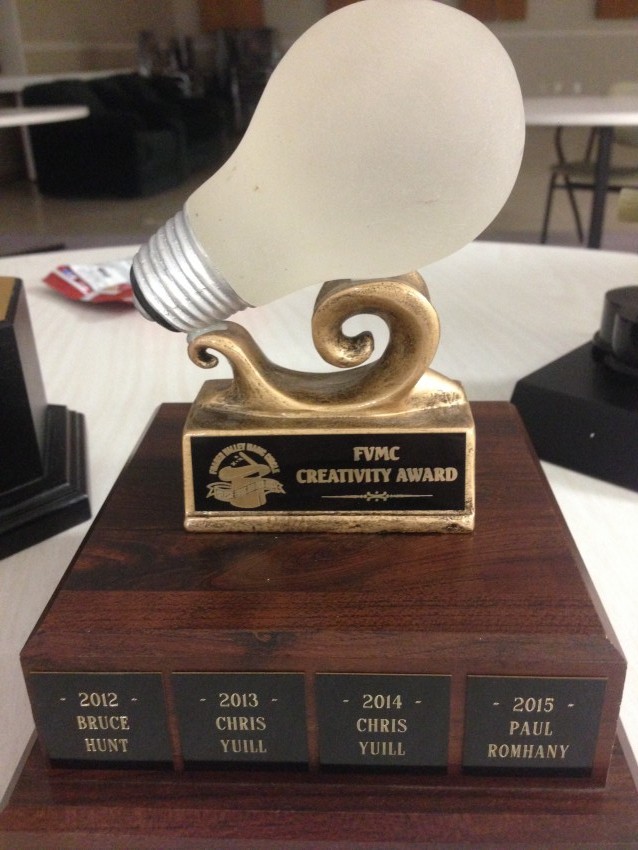 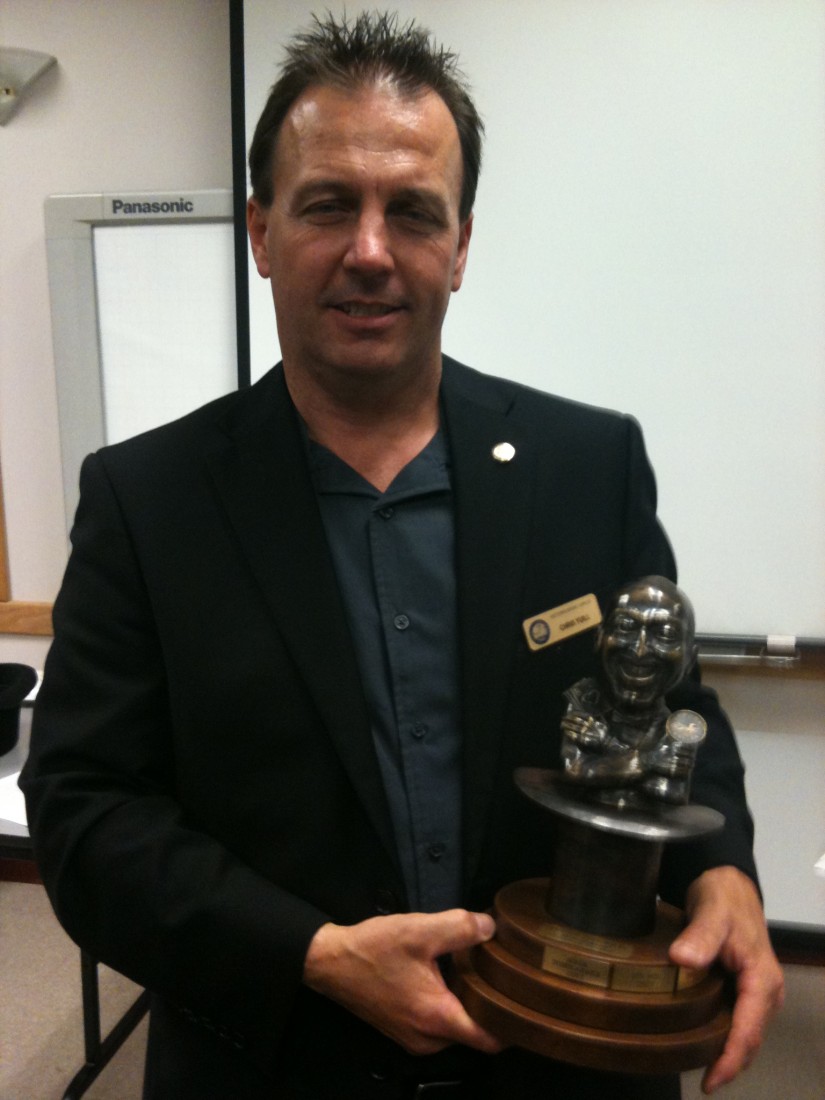 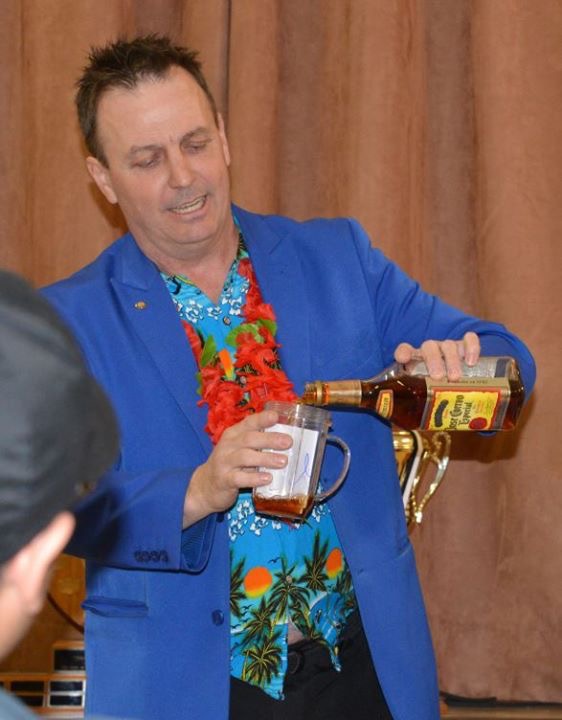 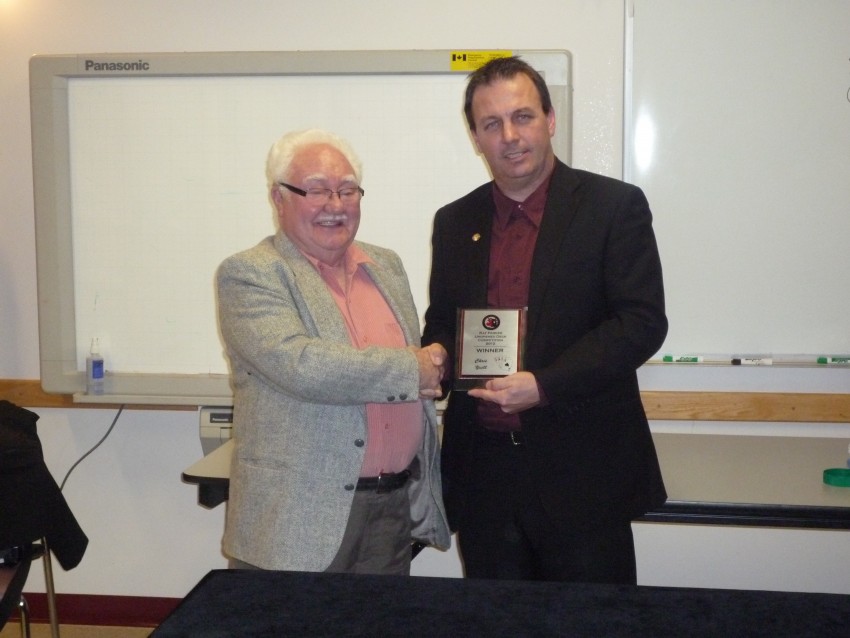 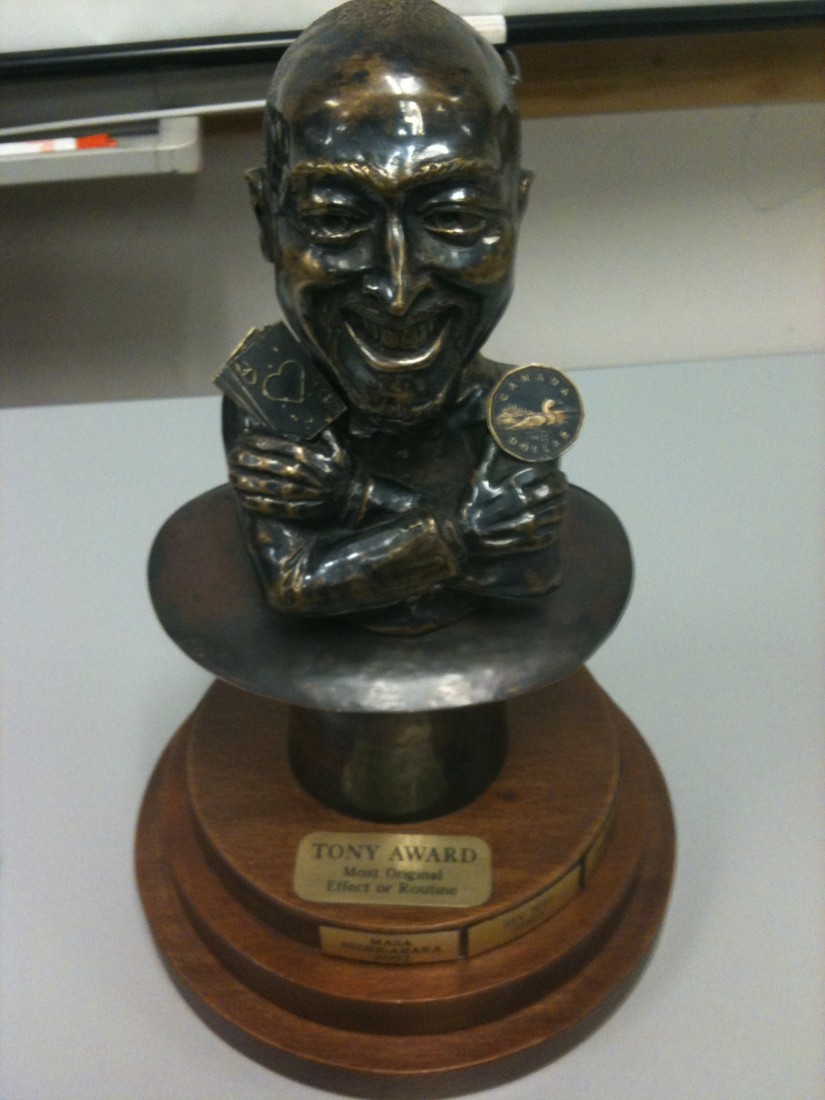 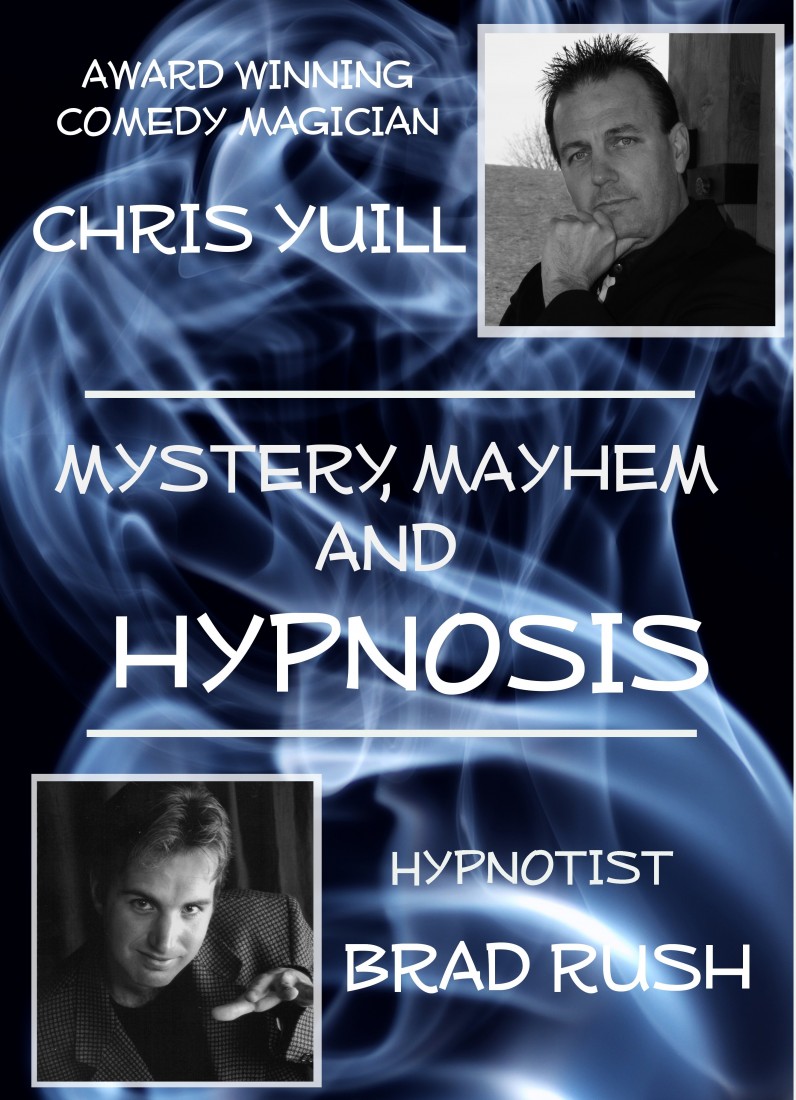 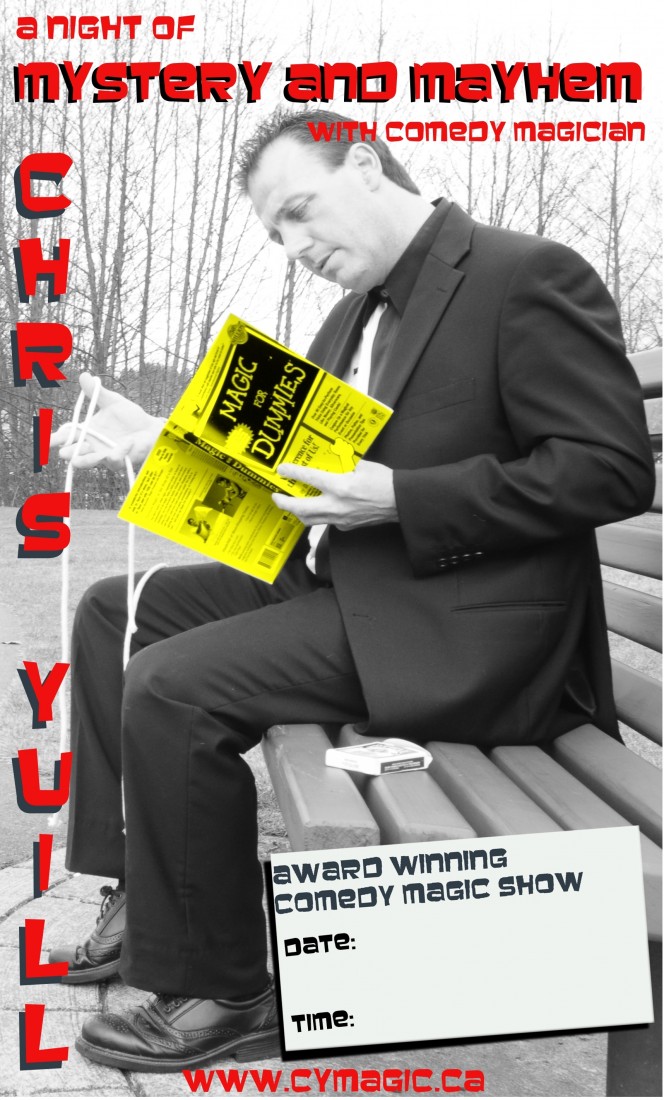 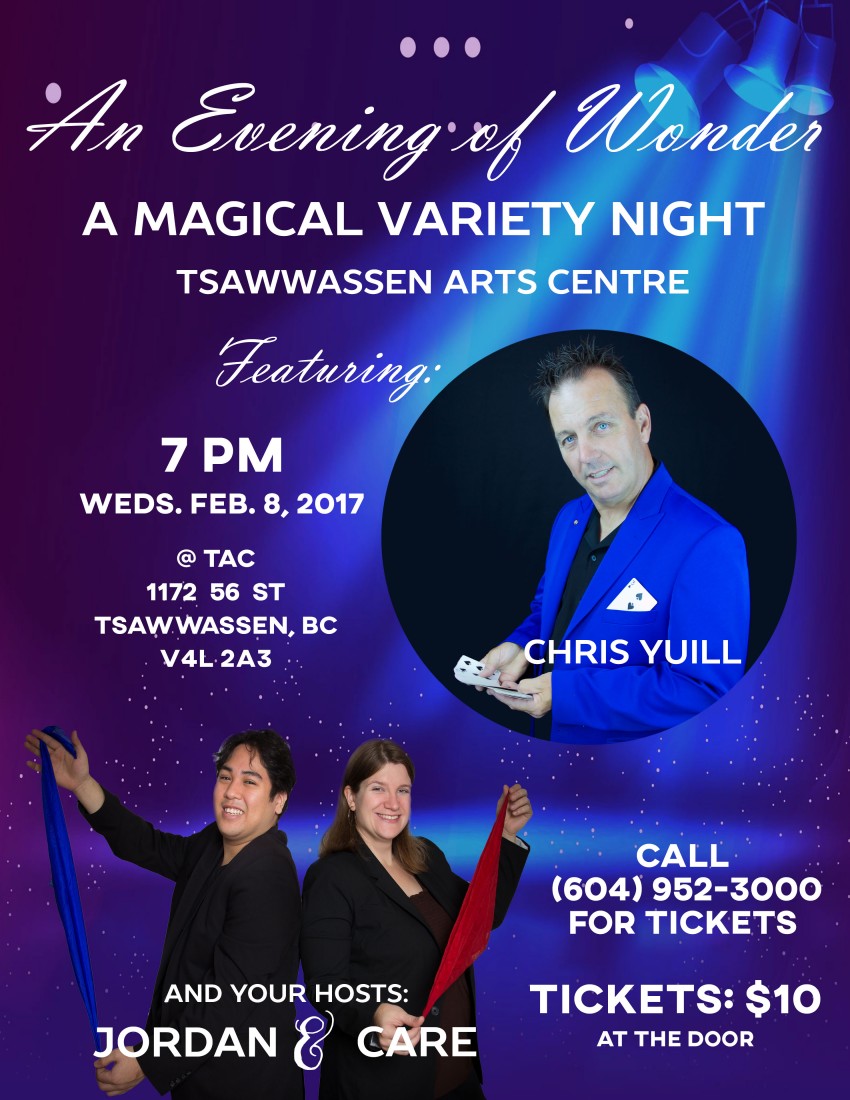 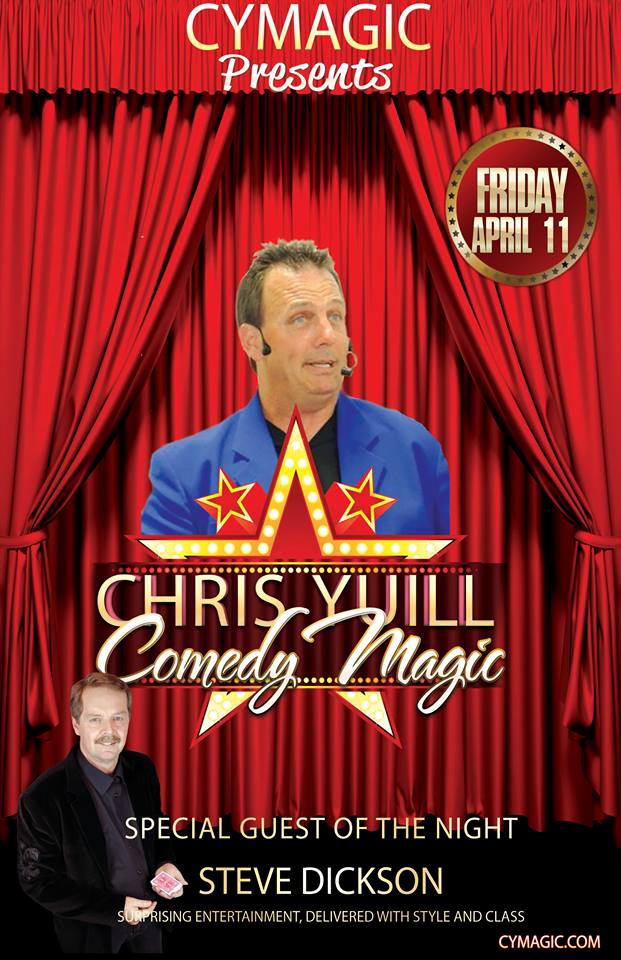 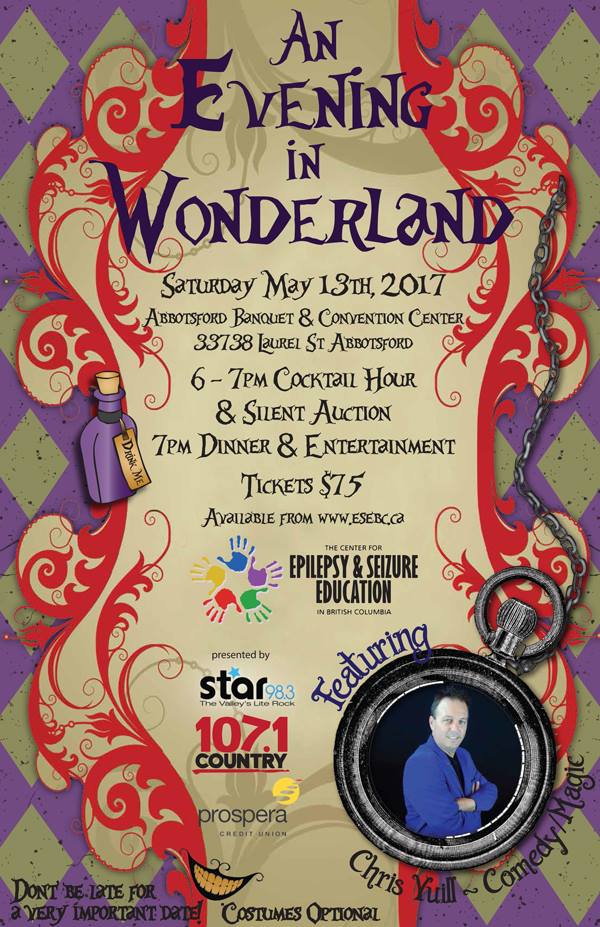 Comedy magician, CHRIS YUILL, has been amazing audiences of all ages for almost 30 years. His Magic and Comedy have earned him invitations to perform at YUK-YUKS COMEDY CLUB, at functions for members of the EDMONTON OILERS, at corporate events for Coca-Cola Corp., Fantasyland Hotel and on the TV Special, “OFF THE WALL”
He has won several awards for his Magic and Comedy including the 2006 P.C.A.M. Pro challenge, and again for close-up and stage magic during the 2010 P.C.A.M. aboard Royal Carribeans Mariner of the seas. He was awarded the “Celeste Evans” Magician of the year award. He just recently received the “Carl Hemeon” Award for Excellence, from the Society of American Magicians.

Chris was exceptional, far exceeded my expectations. He is a classy, hilarious magician with a great rapport with children. He is cheeky and inclusive. The venue staff approached me after his performance to obtain his card and tell me that as caterers, they had not enjoyed a wedding as much as ours, filled with laughter and magic. Our guests still remark on Chris’s performance. Thank you, Chris!

Hi Lacey,
Thanks for the amazing review. I am glad everyone enjoyed and I had fun as well with all the guests. Congrats again to you and Doug on your wedding!!!
Chris Yuill

More than we could of Dreamed Of!!! Best in the Business!!!

Chris was great with the kids and the adults. The kids were still talking about the show two weeks later at school. Will be looking for reasons to book Chris again for any adult or child party. Chris did everything that we asked for and more. We wanted to make sure it would be fun for early teen boys and Chris delivered and some. Would recommend everyone who wants to have a great event with someone who really listens to your needs and wants and goes the extra mile to make it a great event, book with Chris Yuill. Then you can sit back with no stress and enjoy the show knowing that once you book with Chris, your event will be handled and everyone will have a blast. Can;t say enough great things about the event or Chris!

Chris performed at my son's birthday party and it was amazing! All our guests children and adults alike were engrossed in the magic show. He was funny, engaging, and it was very interactive. The show was the perfect length of time and it truly appealed to all ages.My son turned three and at the end of his party he told us the magician was his favourite part as did all our guests. Well worth it!

Amazing, funny and so much fun to watch!!

Chris went above and beyond and really wowed the crowd at my cousins birthday! He is funny and so entertaining! We all loved the entire show!! Hope to have him at my next event again!

Chris was really funny and entertained my entire group the whole time and even before the show started.

I’m so lucky to have Chris performed at my son’s 10 year old birthday. We have 7 kids coming and all of them had a wonderful time with Chris! He is a talented magician that can make everything in control . He made the time passing by so quickly. We really enjoyed his show! The funny Pom-Pom trick made everybody laughing!

Thank you so much Joyce for the kind words. The kids were awesome and very well behaved. Thanx again for allowing my to perform for you!!
Chris

It was so much fun to have Chris entertain the children and adults at my son’s birthday celebration. The kids were older so they tried to figure out how Chris did his magic but he was ahead of them!!! Thoroughly entertaining for all guests to sit back and enjoy. We recommend Chris for your function. Our guests are still talking about the fun they had watching his show. Thanks Chris and we will see you again!!
F. Winter

Friendly for kids and enjoyable show.

It's a great Magic Show for the birthday party and all children love it!

Thanx for the great review
The kids were fun. Glad they all enjoyed it!!

Chris was very professional and organized to deal with before, during and after the event. The entertainment session was great! Funny, tasteful and engaging. Thanks so much for providing a wonderful comedy magic show. It was exactly what we needed:-)
Sonia

Thanks again for allowing me to be a part of your conference. I am glad every one enjoyed themselves while staying safe!!
Chris Yuill
Comedy Magician

Fantastic Show - Fun for all ages

Huge thank you to Chris for performing a zoom birthday for my 10-year-old daughter. He was very accommodating to my lack of technology and made me feel at ease for hosting my first ever zoom birthday party. His magic tricks were amazing, his personality was entertaining! All the kids totally enjoyed his jokes and his tricks. I will use him again - and hopefully when I do covid will be over and we can see him in person. But if not, I would gladly do it again over zoom. Which actually was a lot less stressful (didn't have to clean the house ;)

Chris was the perfect entertainer for our daughter's 8th birthday in the park. He kept the kids engaged and entertained the entire show. Would definitely consider him again!

Very professional and easy to work with.

Thank you so much for having me entertain at your event. The kids were very well behaved and lots of fun

Chris came early and set up without any help from us as we were busy greeting. He entertained the kids even before his show started and handed out booklets for the kids which they were obsessed with. After an amazing 45 minute show he was still walking around and mingling with the tables. His show was very entertaining. I would def recommend Chris. He did require any prompting.

Thanx for the awesome review
The kids were very well behaved
Thanx again for having me entertain at your event.
Chris

Chris arrived on time and was patient with a bunch of crazy 6 year old kids. All the kids had a great time!

I invited Chris to do a Magic performance at my daughter's 10th birthday party. Kids loved his magic tricks. It was a funny, dynamic and interactive performance. Every time kids thought they "caught" the magician being "sloppy" like hiding something up in his sleeve, covering something with his hand, etc. it was in fact a beginning of his next trick which was even more amazing than the one before that. Everyone said they enjoyed the Magic show the most.

Hi Elana,
thanx for the review and having me to your event. I am glad everyone enjoyed it.
Chris Yuill

Everyone at the party loved the show. The kids couldn't stop doing their own magic for days after. The show was very captivating for Everyone, adults and kids alike.
Thanks again Chris!

Thanx again for having me perform at your event. The kids were very well behaved and very attentive.
Chris

Chris did a fabulous show for my son's birthday party. All the kids were mesmerized and the adults were just as stumped on all the magic that was performed. Highly recommend Chris Yuill. His stage presence was great and his interaction with the audience was enjoyable.

Great entertainment for both kids and adults!!!

We invited Chris to do a magic show for our daughter's 6th birthday party in our backyard. Chris was wonderfull! Great performance, kids and adults loved it. Many parents asked us for his business card. Very funny & entertaining.

Thanks for the review!! The kids were very well behaved!!

My performance is completely self-contained; I have my own sound system, backdrop and lights, if you do not have already in your venue. My show is clean and tasteful, uses very visual magic, audience participation, and a live bird.

I have three types of show:

Some clients enjoy having a little pre (or post)-performance walk around/table magic included in their event. An hour of walk-around magic added to your event before or after the show is a nice addition.

If your event is on a tighter budget, I am able to offer a shorter performance of a 45-minute stage show.

As every client has unique needs, we can discuss the details and price to meet your requirements.

I also own and operate Excellence Entertainment and I book other acts as well such as comedians, magicians, and Hypnotists.

I look forward to speaking with you in the near future.
Thanx, Chris
Chris Yuill
Comedy Magician

From Private Parties, Corporate Events, Cruise Ships, and Night Clubs; Award-winning comedy magician, Chris Yuill, has been amazing and amusing audiences of all ages for over 30 years. His Magic and Comedy have earned him invitations to perform at Yuk-Yuks Comedy Club, at private functions for members of the Edmonton Oilers, at corporate events for Coca-Cola Corp., Fantasyland Hotel, and on the TV Special, “Off The Wall”

With a stage performance that combines unbelievable illusion with hilarious audience participation that is sure to please crowds of all shapes and sizes. Call Chris to put some Magic into your event!

Re: Chris Yuill – Comedian/Magician
I write this letter in support of Chris Yuill.
Our association hired Mr. Yuill to provide entertainment at our Annual Holiday Event. Mr. Yuill, drew a big crowd for our association, as he is quite well regarded in the comedy/magic field.
Mr. Yuill was there well ahead of time, in order to prepare his set up, and check out the room. At all times, Chris was professional and courteous, plus he is hilarious, the audience was in stitches. He performs some pretty amazing magic acts as well.
After the event we had many positive comments from our members. "loved him" "couldn’t stop laughing" "oh my goodness so hilarious" and "super nice guy."
We would be pleased to have Chris back to entertain us. I would highly recommend Chris Yuill for any event.
Yours very truly,
Victoria Legal Support Staff Association
Debbie J. Shaughnessy, Program Chair

"We have had Chris on our stage on several occasions. Time and time again he proves to be a wonderful entertainer. We can always count on an honest and professional Performance from our friend Chris."
Bill Medak General Manager Yuk-Yuk's

"Thank you once again for being part of the entertainment at our Edmonton employee incentive party. You helped set the tone for the night and made it a great evening of fun. I would recommend your show to anyone who's interested."
Kevin Dotringa, Sales Supervisor; Coca Cola Bottling Ltd.

"I can honestly say that Chris Yuill is a top performer both in a professional and personal sense. His performances are always top-notch, enjoyable to watch, and participate in. He obviously enjoys his job for it shows in the way he relates to the audience. "
Karen Gurba, Marketing Assistant; Kingsway Garden Mall

"On behalf of the management and staff of Illusions, we would like to express our sincerest thanks for the professional, yet hilarious performance that you provided our customers."
Traci Milterberger, Marketing and Sale Manager; Greenway Management

"We hired Chris Yuill to perform a magic show at our children's Christmas party and we found him to be delightful and entertaining. He kept the children's attention and had them participate in various tricks."
Brent McGillivray, Social Club President; Husky Oil Company

My act is fully self contained.
I have backdrops, sound, and lights if needed