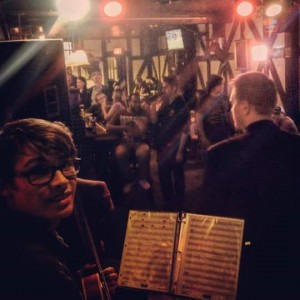 I am a versatile singer, musician, instructor, songwriter and actor who can perform solo, with a single accompanist or with a full band. I have performed and am well versed in many genres of music and can provide first class entertainment whether you are looking for a jazz crooner and piano due, a Motown soul band, opera singer, musical theatre revue or and folk, rock or pop group I can make it happen. I can also compose or arrange custom songs for whatever occasion you might have. So wether you want to book me as a solo singer or you need a 5 piece band with backup singers, I can put together something just right for you!

Looking forward to preforming for you!

Be the first to review Chris Harvey

Chris Harvey is a singer, actor, musician, songwriter and teacher based in Toronto. Hailing from Vancouver B.C. Chris attended Capilano university where here studied in the classical music and musical theatre programs. Having studied and performed music for almost 20 years Chris has sung and played in many bands, musicals, operas, choirs and productions in Vancouver and Toronto as well as abroad and has shared the stage with many talented artists such as Colin James, Dal Richards, The Nathaniel Dett Choral, and the Sojourners to name a few. Starting his musical journey as a classical percussionist and then vocalist and moving through jazz and latin genres Chris has a strong grasp of the fundamentals that make up a solid musical education. As his interests expanded he became well versed in rock, pop, musical theatre, soul, funk, blues and r&b as well and is capable of delivering a wide ranging and balanced musical experience. Aside from being a talented performer Chris is also and accomplished martial artist in several styles including Kung Fu, Hai Dong Gum Do and Ninjutsu.