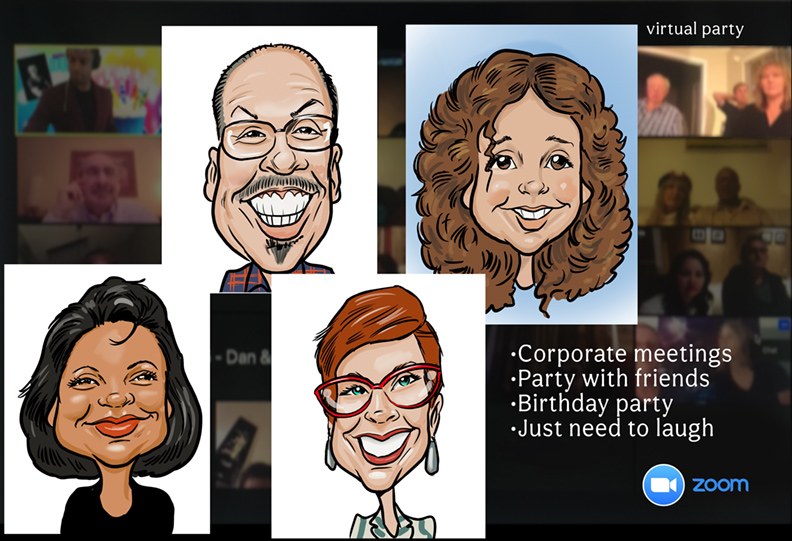 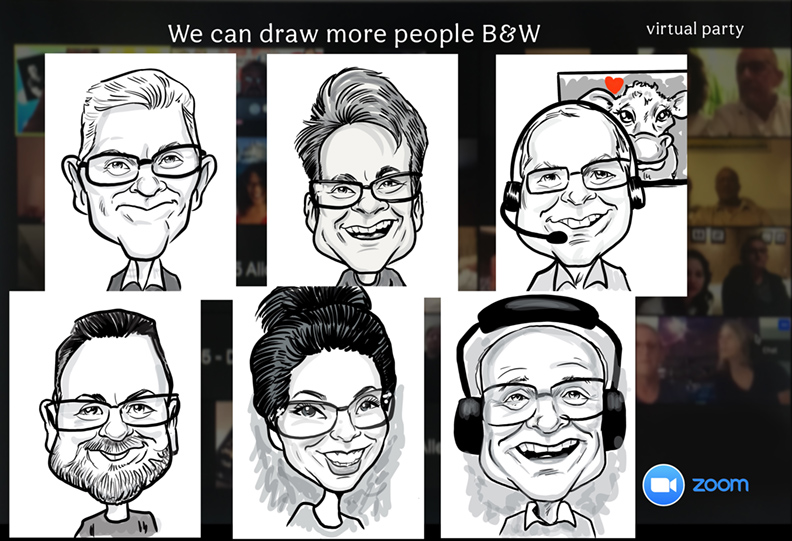 Zoom party B&W caricatures- More drawing if you have a large party. 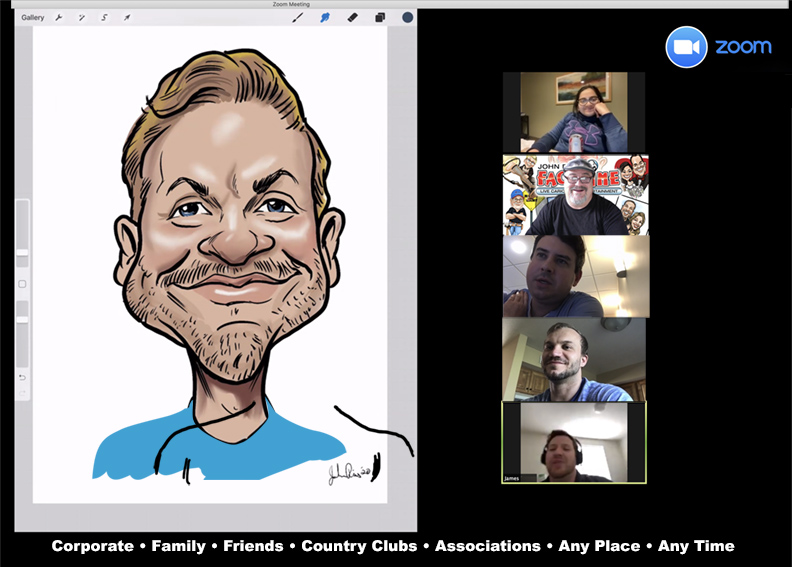 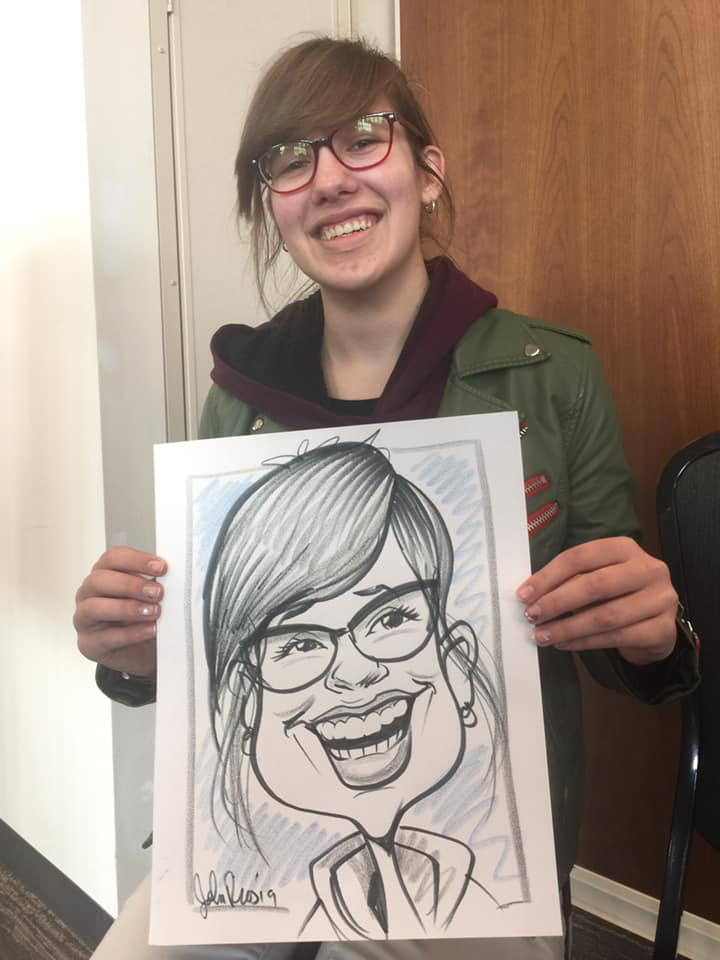 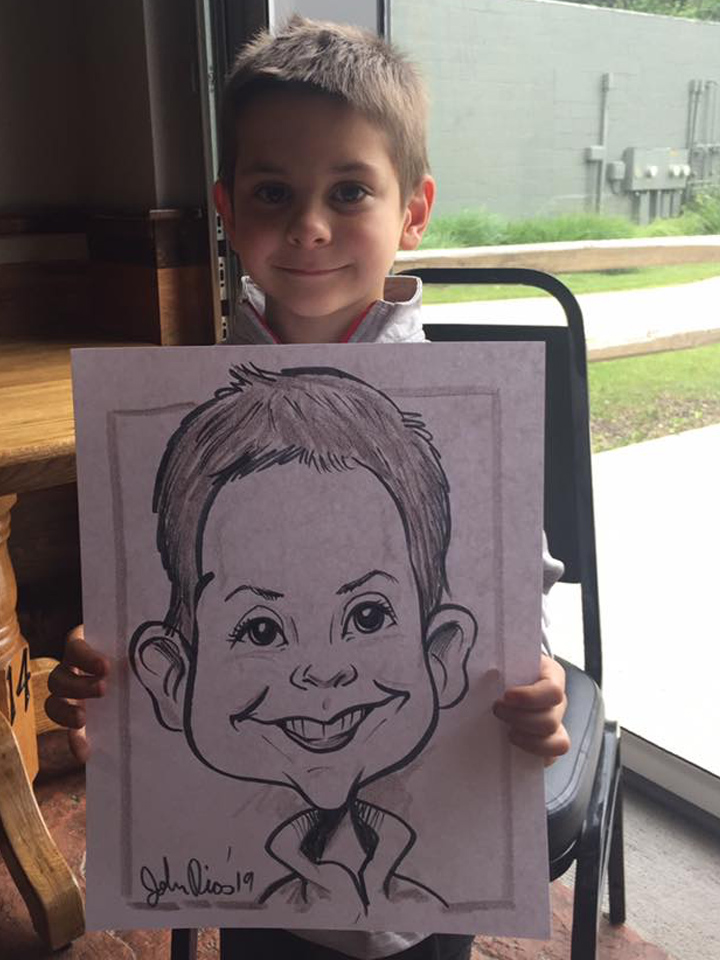 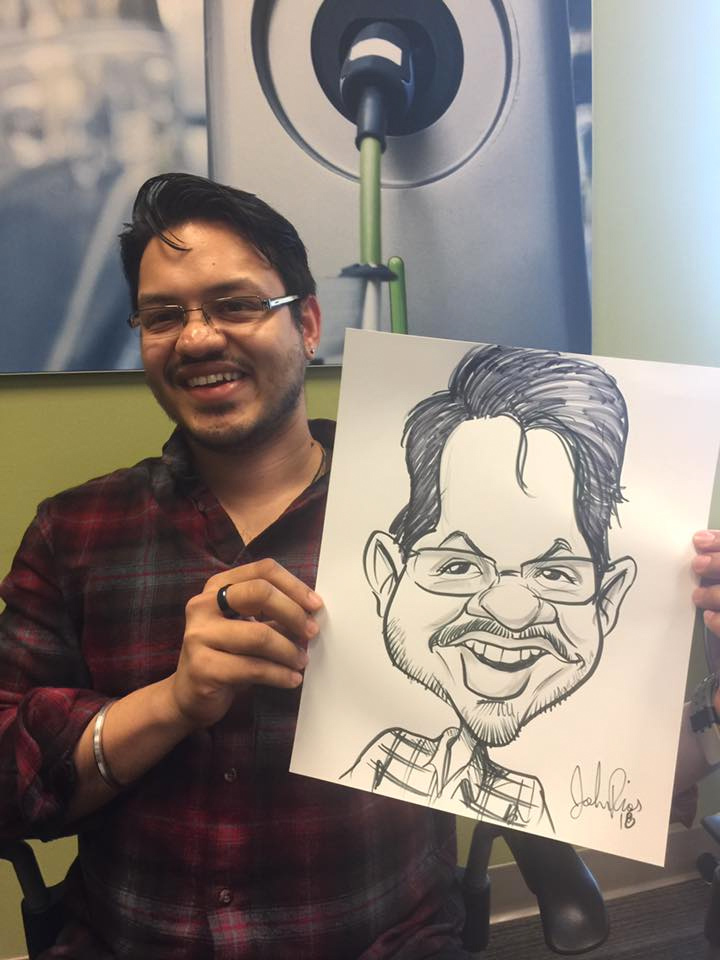 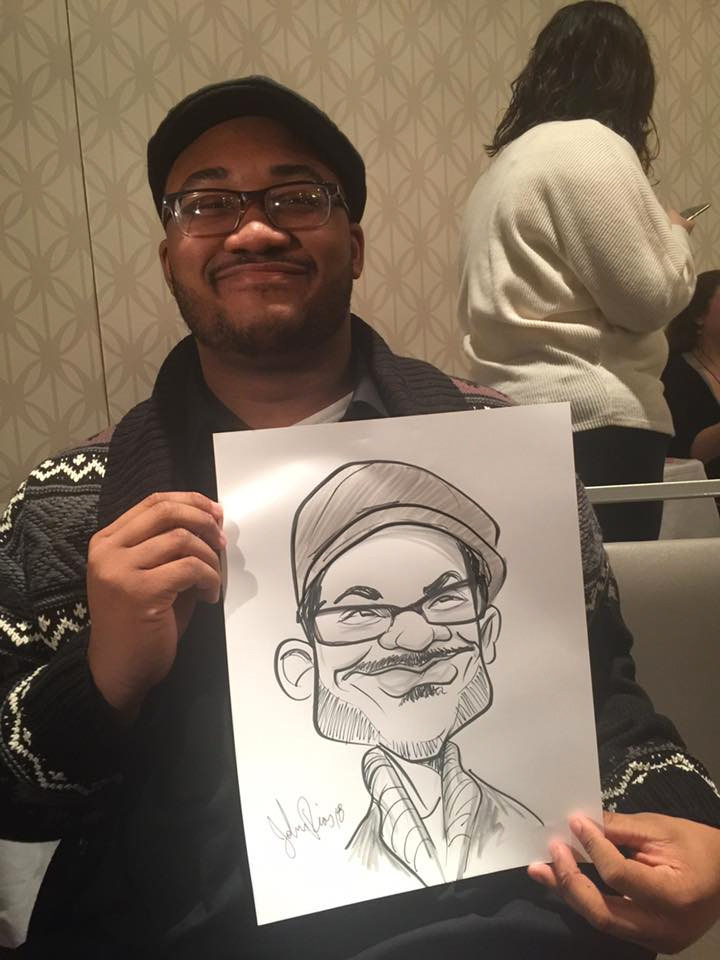 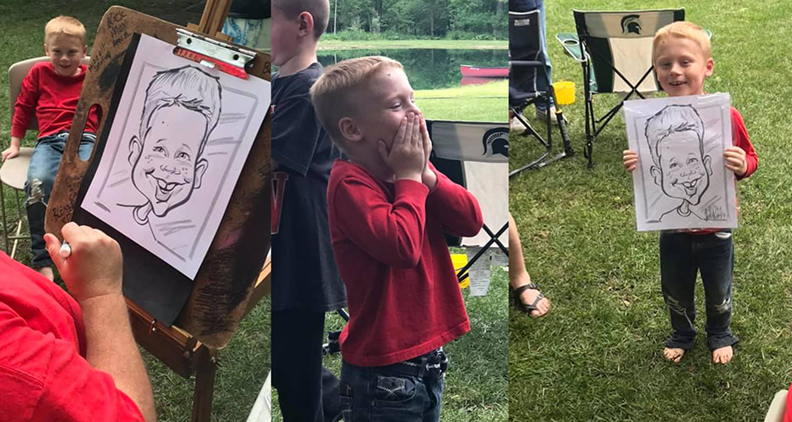 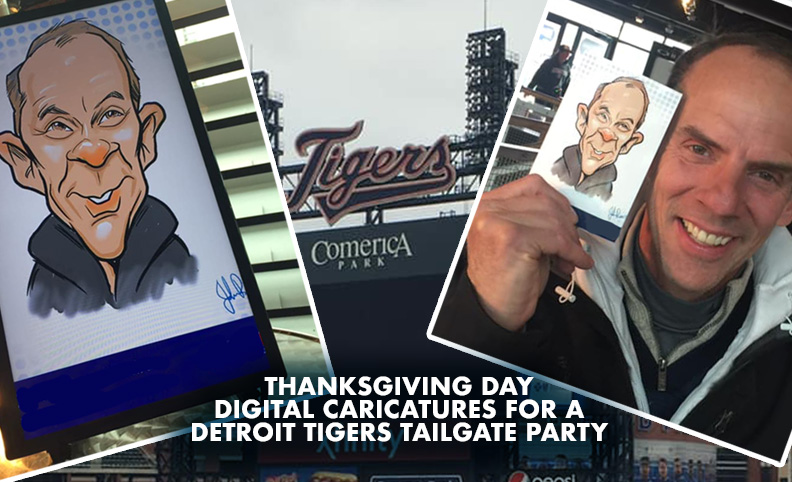 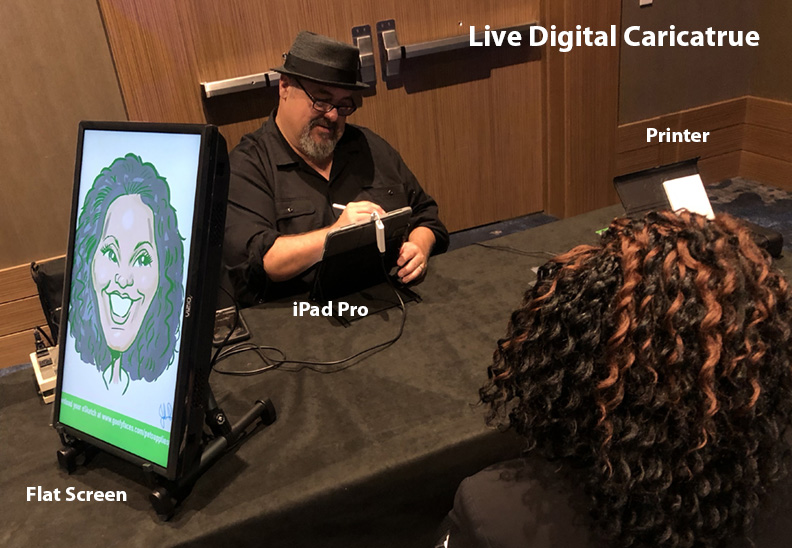 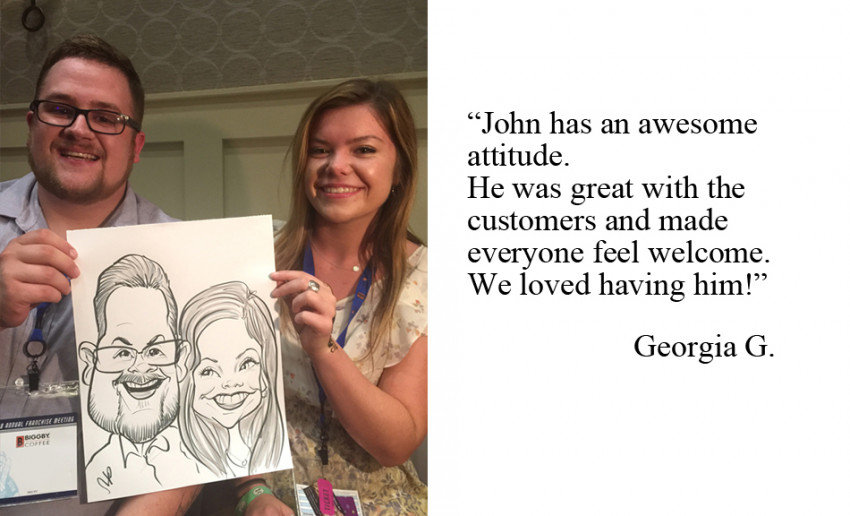 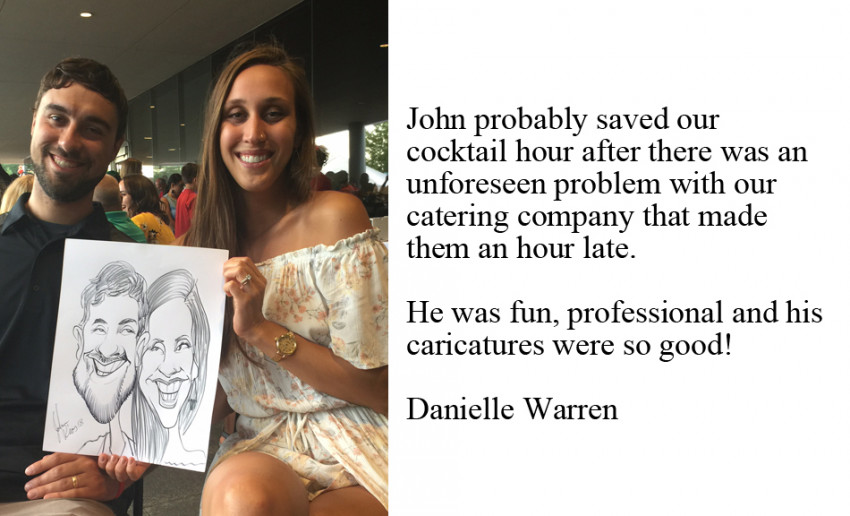 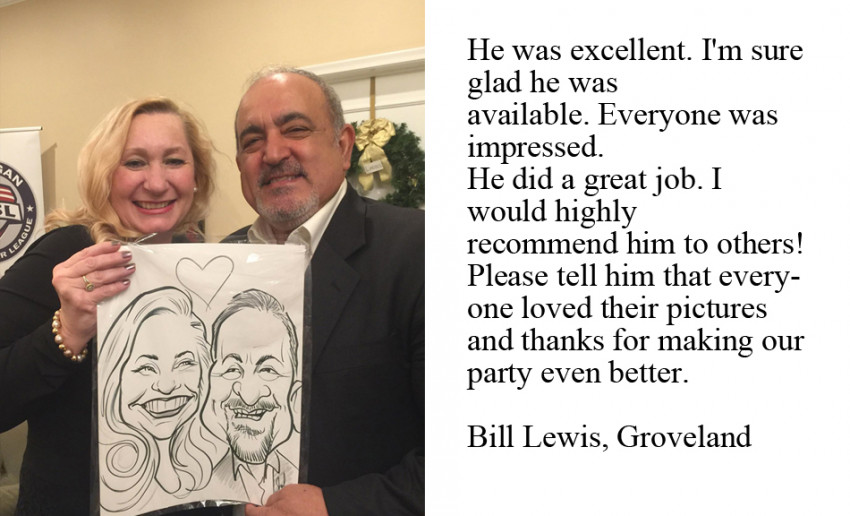 DUE TO COVID 19-
VIRTUAL events Using "Zoom" we can all be in the same virtual space. Zoom is FREE to use. ( go to zoom.us to get the app) HOW IT WORKS- * Log into the zoom meeting - link will be provided * Events for 1 -100 people * I share my drawing tablet screen so you can watch the art being created LIVE and log on as a participant so that we can interact * I'll draw each person invited to your virtual event * After the event I'll provide a dropbox link that can be distributed to all participants so that you can have the digital files *
Because this is "New Territory" for everyone time restraints on events will need to be more lax • Per caricature option available. Available WORLD WIDE

John was the best !!! My family and friends just loved him !!

John was the best !!!! He kept drawing and never complained. My guests loved him.
He even stayed extra for us .

Thank you so much! You and your family and guests where so kind and welcoming. Be in touch any time!

You will be amazed!

John is fantastic. He is thorough, proactive, great attention to detail...and then of course, a world-class artist! We invited him to a large internal company event, and he was a massive hit. I'd highly recommend John for any setting. Talented and fun. A+

Hit of the night!

Amazing from start to finish! This was a last minute booking for my (ever changing! Lol) wedding! I didn’t tell anyone he was coming, and when he arrived I thought my new husband and I would have to start things off, but people immediately were into getting drawn! Then, once they saw how amazing his first drawing was, the line never stopped all night! Thanks again so much John, and we will definitely save your information!! ☺️

John is a MUST HAVE for your party!! Totally awesome!!

John was simply amazing! He is talented beyond this world and his drawings were loved by all. John's presence added a special touch to my niece's dual birthday and graduation party. Everyone loved having a special take-a-way of their caricature drawing from the party. John worked diligently for 2 straight hours and put a smile on everyone's face. He was loved by all. Highly, highly recommended.

Thank you so much for having me and for the amazing review. It was a pleasure entertaining your guests. So much fun!
I welcome the opportunity to be at any event you have.
John

I hired John for my son’s first birthday party. He was fantastic and everyone loved their drawings.

Thank you so much Kristen. It was a pleasure being at your event. Such a nice group of family and friends!

John's customer service while drawing each employee and their family at our holiday party was just amazing! He went above and beyond for us! Would absolutely use him again in the future and highly recommend him to others!

The caricatures depicted each person in a very unique and funny way. John is a great artist and was very accommodating!

Thank you Donna! Such a great group of people to draw.

We hired John for our kids birthday party ages 6,6 and 9. He was a hit with both the kids and parents at the party. From a planning perspective he was prompt in responding to all my communications, early for the event and very polite to all the guests. I would hire him again.

Thank you so much! It was a pleasure!

John has an awesome attitude. He was great with the customers and made everyone feel welcome. We loved having him!

We loved having John at our party yesterday. He did an awesome job, was very personable and professional, and everyone loved his work. Great caricaturist! Thanks!

Thank you for having me at your son's bar mitzvah. Such a wonderful family.

The best caricature artist I have ever experienced!

John did an amazing job at our event. After doing hundreds of drawings, the last was just as amazing as the first!

I don't pencil in the face first. My technique makes the caricature seem to come to life right in front of your eyes. This also helps with the speed of which I work so you get more caricatures for your money.

Born and raised in a small town in west Michigan, John started drawing as soon as he could hold a crayon. His enthusiasm and ability to create humorous and exaggerated art was soon noticed by his high school art teacher who would pass on his humorous illustration projects for John to complete.

In 1982 John joined the United States Marine Corps where he found himself stationed in Hawaii and traveling across the Pacific to several ports of call. To this day the faces, cultures, architecture and experiences influences his art.

After leaving the Marine Corps, John moved back to Michigan and moonlighted as an illustrator for a few years until opening his own graphics studio in 1996. We produced everything from forms to business cards as well as illustrations for publications and more. As luck would have it, a chance meeting with Rock legend Ted Nugent back then would change the course of where his art would open doors and take him.

After over a decade of John’s art being a part of the Nugent brand, Ted decided to use one of John’s illustrations on a backdrop for his tour. This opened doors with the rest of the music industry once word spread of not only his creativity but his ability to create technically sound digital files for stages that need art to reproduce well as large a 100’ wide.

Through this, John has built relationships with backdrop production houses, bands and staging companies that have produced opportunities for his art to adorn the stages of such well know bands as Kid Rock, Eminem, Alice Cooper, KISS, Rod Stewart, Little Big Town, Eric Church, Jason Aldean, Nickleback, Motley Crue, Billy Idol, Flogging Molly, Miranda Lambert, Korn, System Of A Down and many, many more.

I'll need to be within 10 feet of an electrical outlet and need at least two chairs provided to perform.