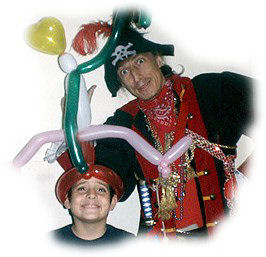 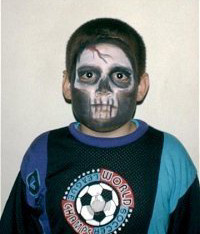 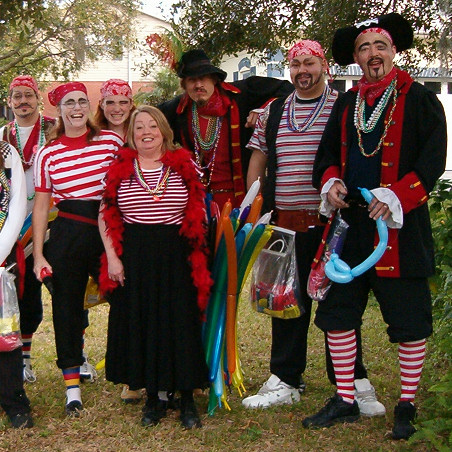 Captain Red (center) with part of his crew, ready to entertain at a Tampa Bay Buccaneers game

23 Years in the Children's Entertainment Business and having fun every minute of it! I have expanded my services from the Tampa Bay market to Orlando/East Coast market. I am ready to travel to your child's party!
My alter ego is Captain Red the Pirate. Please visit my website or Facebook page Captain Red. I am a well-noted face painter, magician, comedian, and motivational speaker. I will entertain at home and business at a reasonable price. Let's have a party!!

Captain Red gave an outstanding performance at my granddaughters’ tea party. He kept everyone entertained, even adults! He was funny and did an awesome job! I would definitely recommend Captain Red!! Thanks to Captain Red and his little bunnies!!

Thank you so much for the wonderful review. Captain Red was delighted to entertain everyone at your granddaughter's birthday party.

If I could give more than 5 stars! We all loved Captain red. He came from a long trip to our house for our daughter’s birthday. He was on time, very professional and funny! I was also amazed that we got a Pete the cat stuffed animal 😍. The good reviews he has and experience doing this for so long brought us a wonderful time. If you want to hire him, don’t doubt it !
Thank you Captain red for making my daughter’s party memorable.

Thank you for the wonderful review! We deeply appreciate it! We are so glad that everyone enjoyed Captain Red's entertainment from the kids to the adults. Since you were having Pete the Cat theme for your daughter's birthday event, we wanted to give a gift that tied to her party theme. Captain Red does his best to make the child feel extra special on his or her birthday and so glad your daughter enjoyed it! Captain Red brings smiles, laughter, and great memories to his events. Again, thank you so much for the heartfelt review!

All the kids loved Captain Red. He was so wonderful and we were very impressed of how well he did the kids. We had kids of different ages and he did amazing with different age groups and kept them so entertained. He took time with each one when making balloons and face painting. His Magic Show and Treasure Hunt were also a great success and all the kids loved it. I just have to say he did such an amazing job and provided such fun-filled entertainment to the kids at our party. The adorable rabbits were also a great success with everyone. They are just the cutest and the birthday girl and everyone just loved them.

Thank you again Captain Red for bringing such joy at our party! Everyone at our party from babies to adults loved the entertainment he provided! We are very happy that we found him on this website! He made our party so much more fun and brought tons of joy to everyone there!

He was so amazing with every age from 2 to 102, all of my visitors enjoyed him and he was a joy to have with us.

I booked Captain Red to entertain at my child’s school in honor of her 6th birthday. It is a small private school for autistic children. His warmth, humor, talent and giant heart is priceless! So many smiles, so much fun!! Absolutely love him, highly recommend!!

Captain Red was hired for my daughters baby shower , great

Captain Red was great with the kids, balloon twisting, face painting, treasure hunting, and live bunnies to pet.
delivered much more than ever expected. On top of all that! Gave my daughter a gift for her baby. A cute pirate outfit.
Captain red was fantastic. WEll worth the money.

Incredibly Fun and A Joyful Experience

Captain Red was AMAZING!!!!... He arrived on time and ready to entertain! He was a joy and kept the children interested even though some were late, he greeted guest on the way out and left presents! We were so blessed to have him, he is most definitely a one man show and I've never seen my family so envolved! They loved the bunnies!

I wanted to thank you for your understanding and your impeccable professionalism! You entertained my children and kept them happy when my little one was almost at tears due to her friends being late, you immediately lifted up her spirits and were the highlight of her special day! Thank you so much... Sorry this is long but we had to express our gratitude and appreciation!

Thank you so much! I love to hear that I helped bring happiness to your daughter and everyone else on her special! This is what keeps me entertaining!

He was awesome and kept 25+ kids happy even in the RAIN! Just loved his way with the kids and the adults thought he was entertaining too :) VERY impressed.

We had Captain Red at our son's "Gotcha Day" party to celebrate his adoption. Captain Red was great. He kept all the kids entertained the whole time he was there. That was not an easy task seeing as how we had kids from the ages of 18 months to 12 years old. We will be having him back to entertain again. He will be busy with our 6 grandkids. I highly recommend Captain Red.

Do yourself a favor: HIRE CAPTAIN RED!!

There are literally no words to describe the amazement of Captain Red . I hired him sight-unseen for my son's 4th birthday party and he was WITHOUT QUESTION the best part of the day. His enthusiasm is boundless, his talent is insurmountable, and his level of energy is evidently never-ending. The kids at the party ADORED him - but not more so than the grown-ups, who were gobsmacked. I literally spent 20 minutes talking to different parents who wanted to know the identity of this magical stranger and whether I had hired him from Disneyworld (no joke). When it was time for him to leave (he stayed longer than he was supposed to, btw, because he is awesome), I gave him every cent I had on me and would have given more if I'd had access to an ATM. There are no words. He is magical, he is delightful, and he goes far and beyond the standard of any child's birthday party. If you want your child's party to be the one everyone is freaking out about, do yourself a favor and hire Captain Red!!!

I hired Captain Red as a surprise for my daughter's 8th birthday party. She loves everything pirates. He was a total hit! A super nice guy who really knows how to engage the kids and make sure the birthday child feels special. He did balloon twisting, face painting, magic, and a treasure hunt! He made sure every child was attended to, no one felt left out. All the adults loved him too! I was very impressed with Captain Red!

Always Does An Excellent Job

We have hired Captain Red for years to entertain for our company. It's a sure bet the client will be happy. Captain Red entertains the children with his facepainting, balloon twisting and magic. Always in character, even with the pirate jargon and voice, the adults are entertained as well. He is very outgoing and comedic. People also love his treasure chest hunts. Recommended.

The children will have fun and be excited about the activities. The adults will be swept away back to being children and having fun with his or her children.

I will experience the pleasure of knowing that I provided the best performance for the adults and children when I see their happy smiles and joyous laughter!

I have lived in Tampa for 25 years and 23 years as a children's entertainer. I have 4 grown children that sometimes aide me in my performances. Recently, relocated to East Coast (New Smyrna Beach) to be with family. I have expanded my services to include this area. I have several costumes, however, my most noted is Captain Red. I'm also a magician, face painter, and balloon artist. I book at an hourly rate with a deposit. At your request, I can perform with additional crew members or solo. In addition, I do work on holidays and evenings.

I have performed as Santa for the past 10 years at a family's Christmas Eve Party and have seen the children grow up and turned into lovely adults. Now they are starting new lives and I am entertaining their children. This is what it's all about - family.