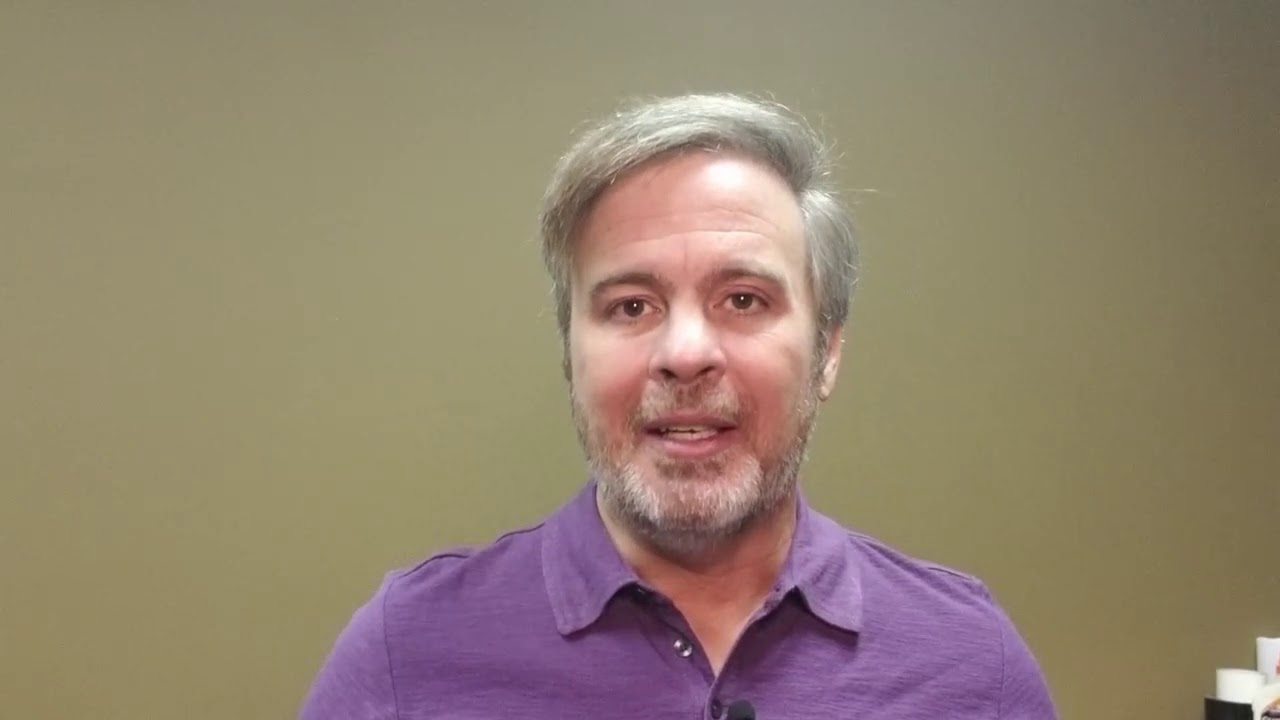 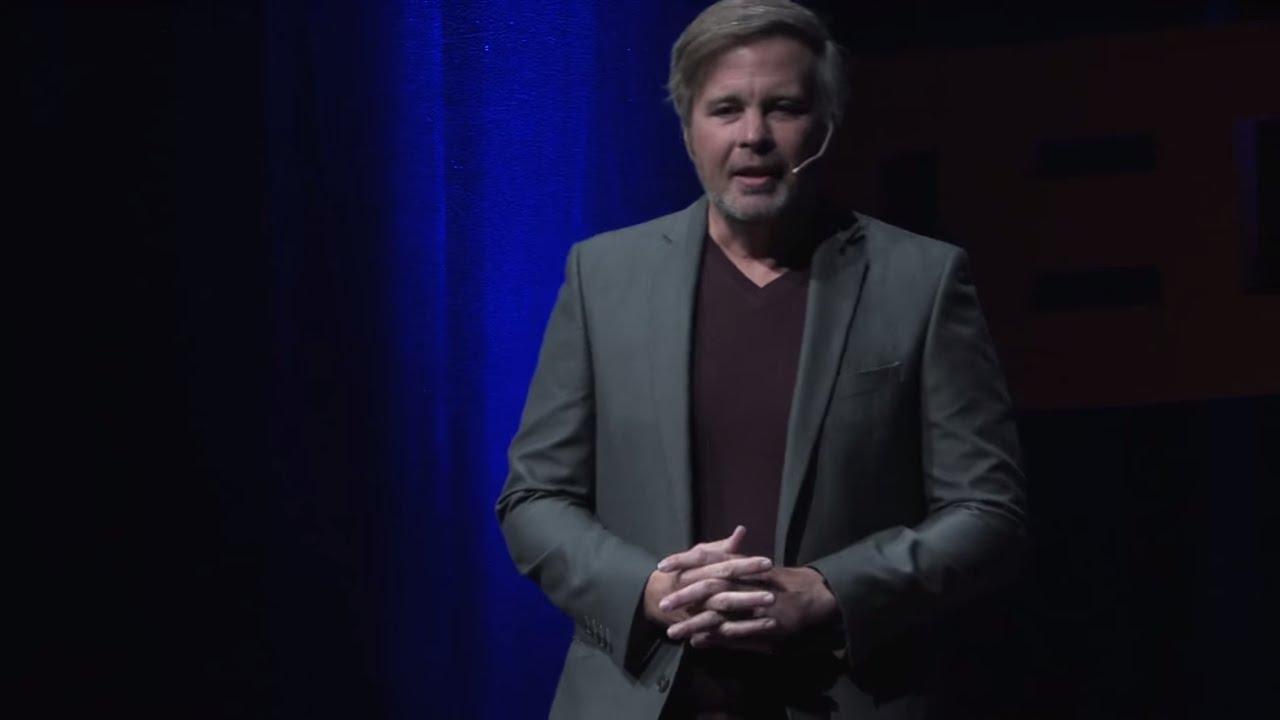 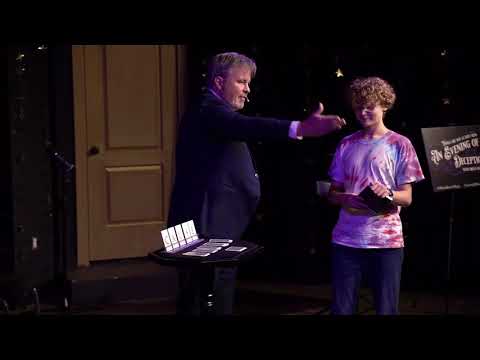 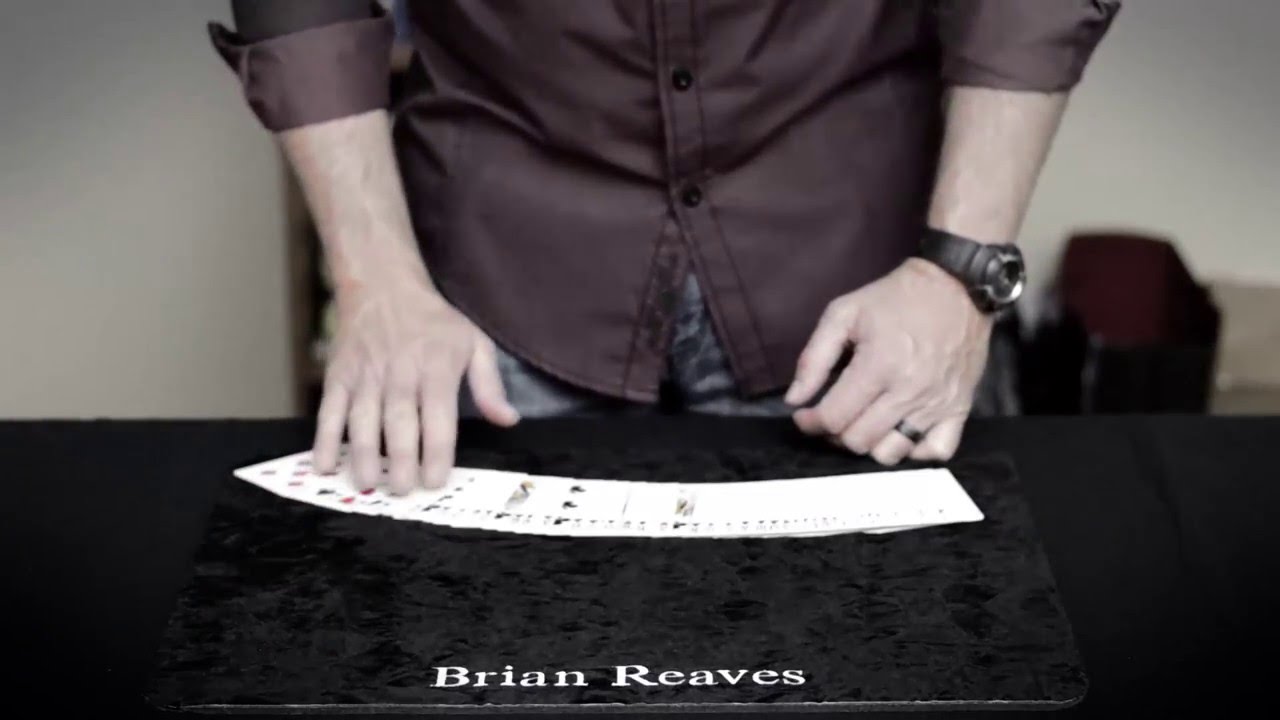 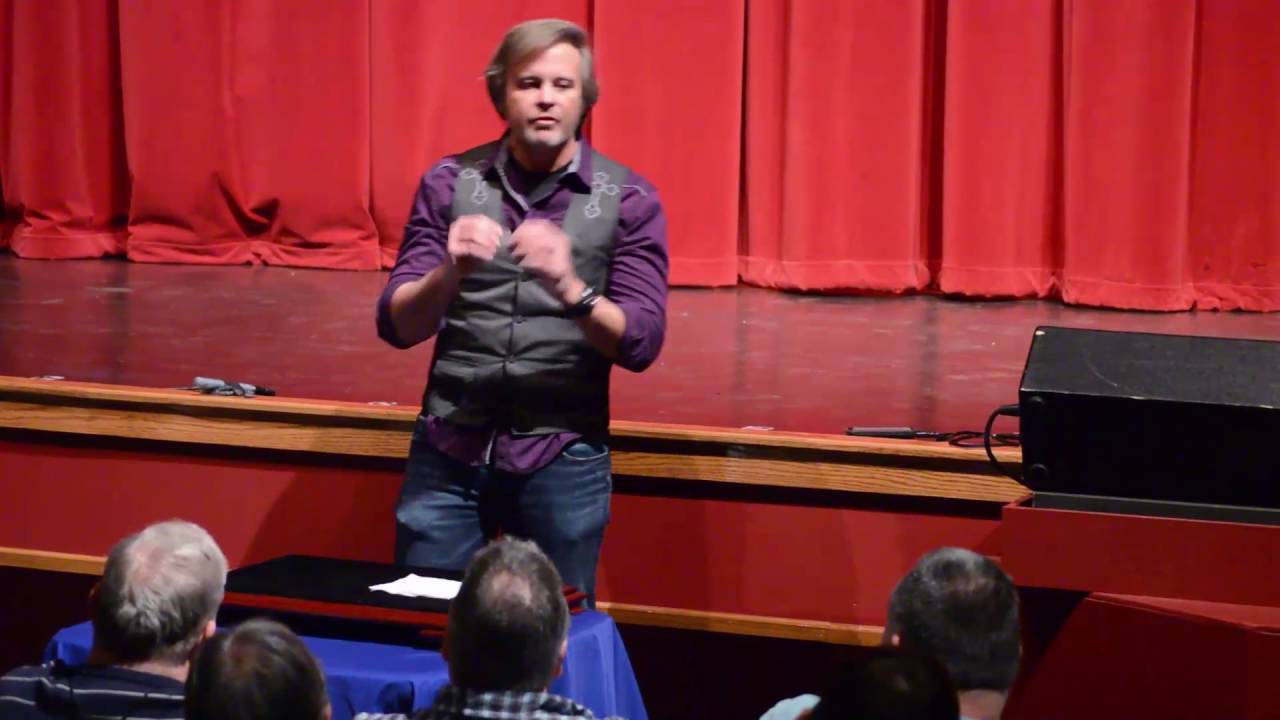 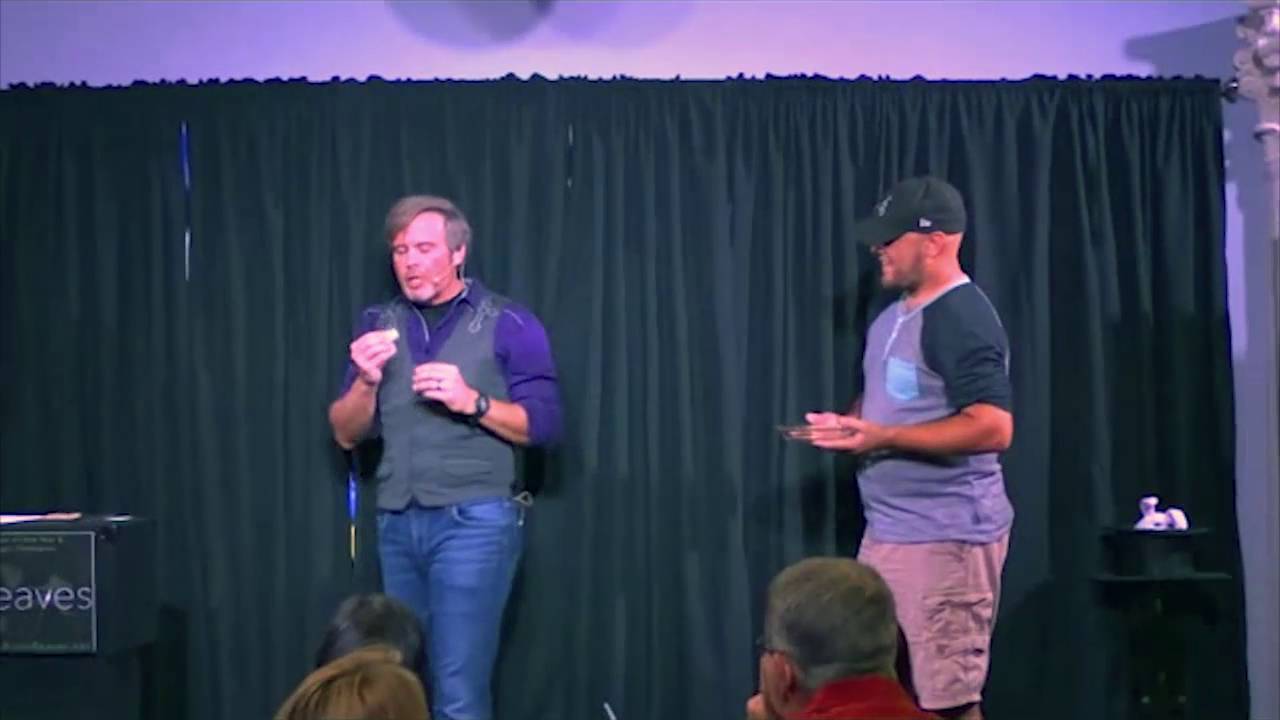 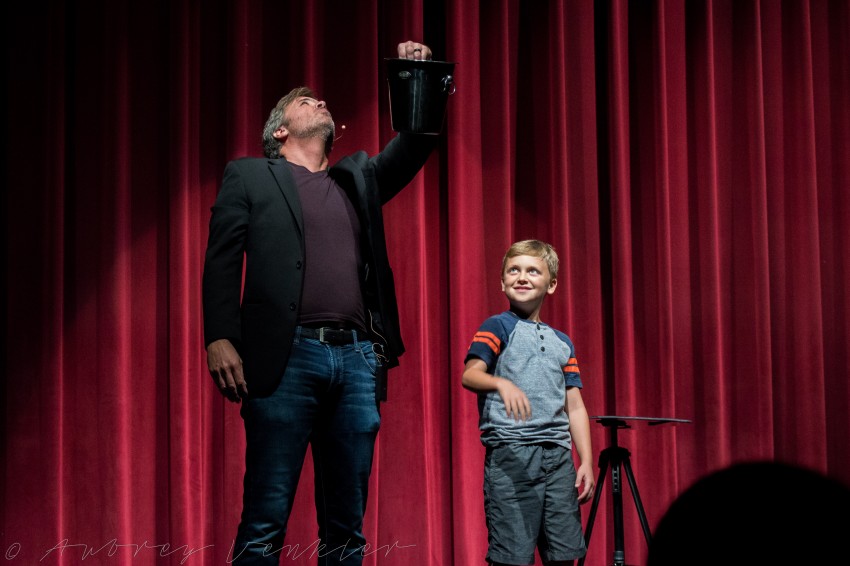 Magic for all ages 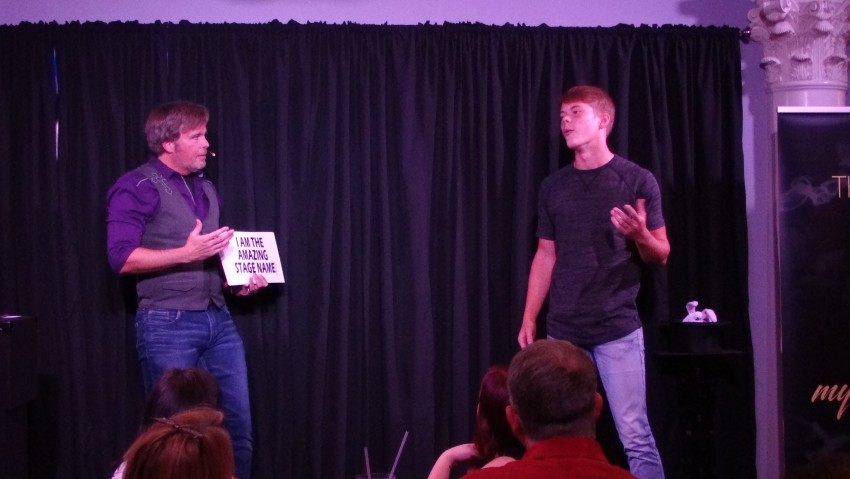 Audience involvement in every show

Magic for any size audience 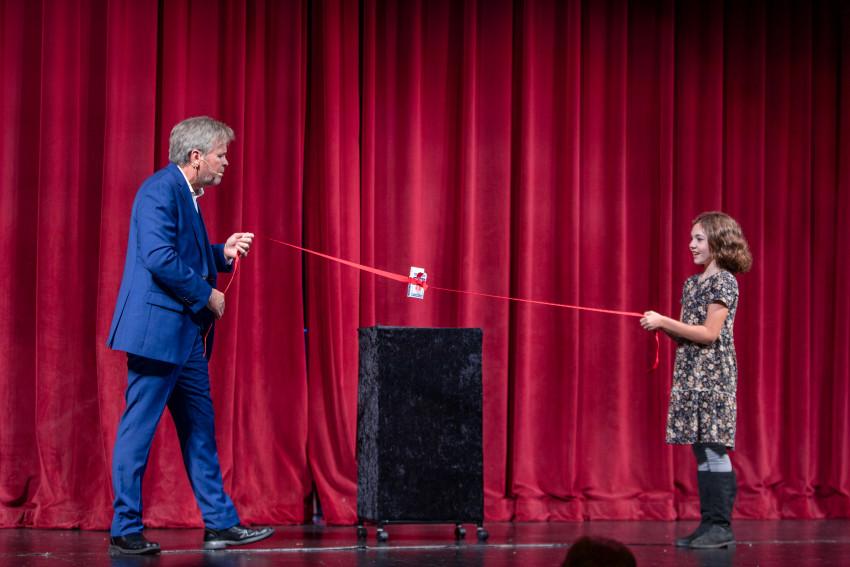 Professional magic for all ages 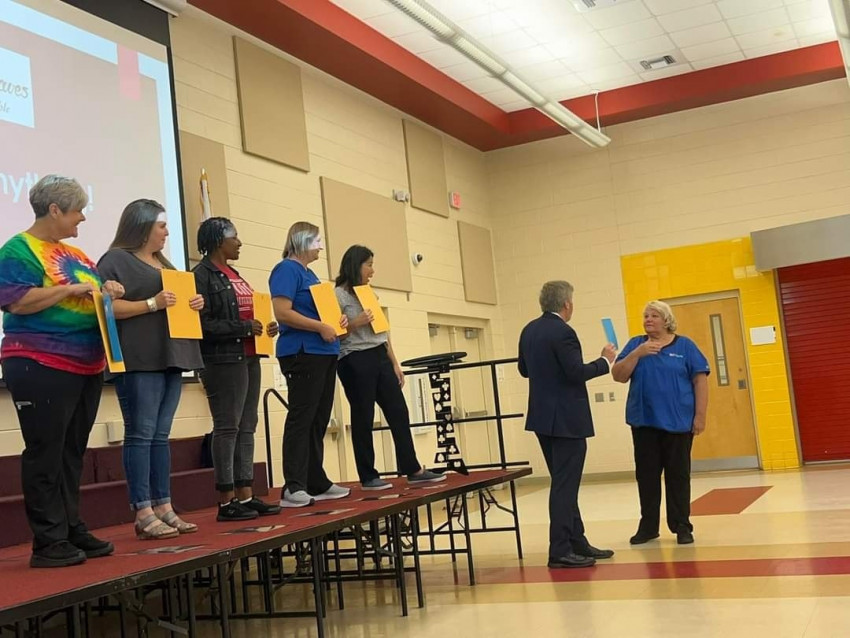 Make your next event unforgettable! 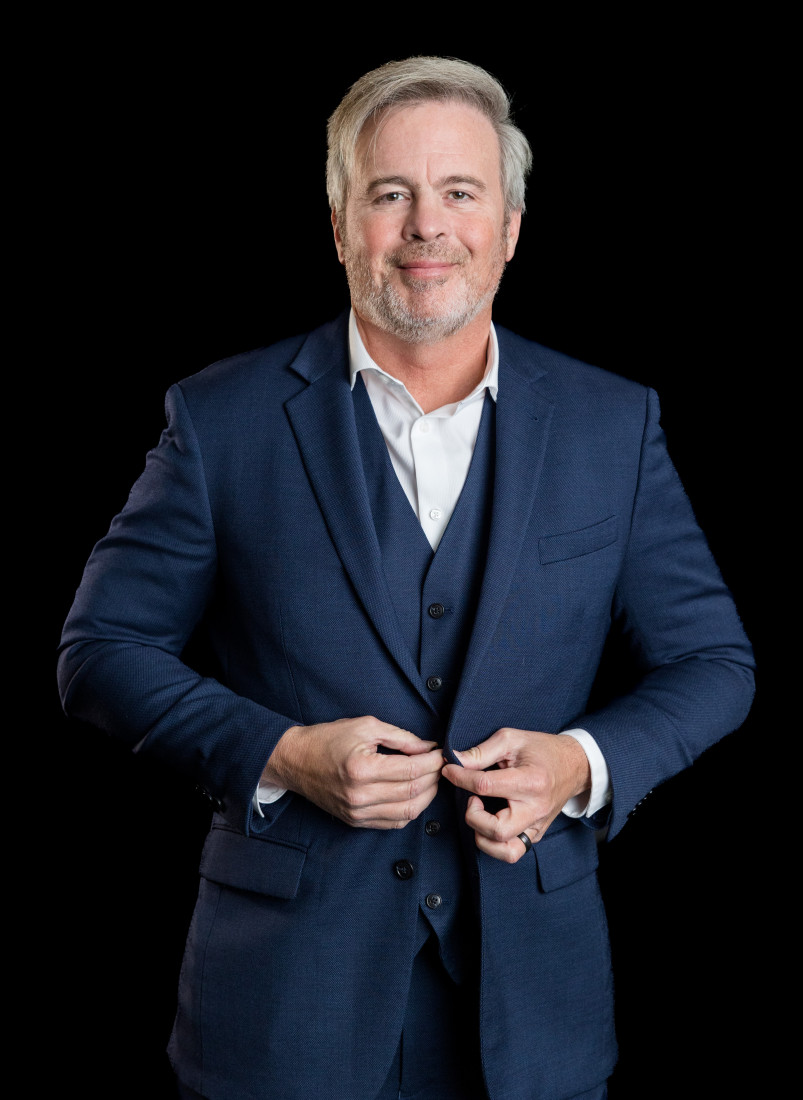 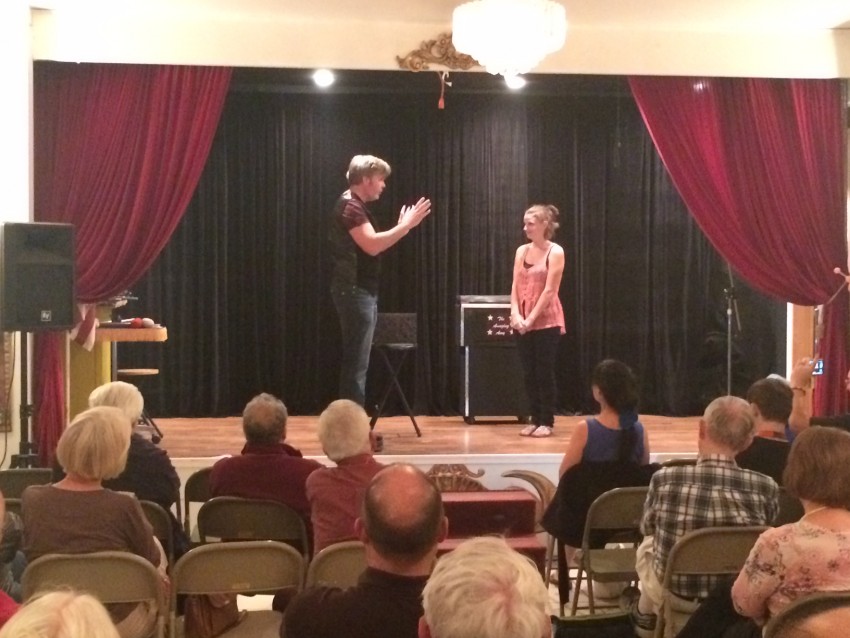 Magic for any event 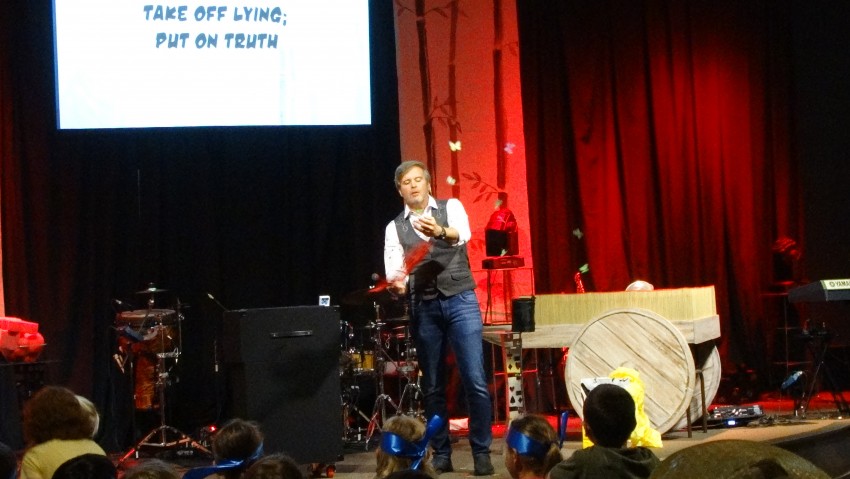 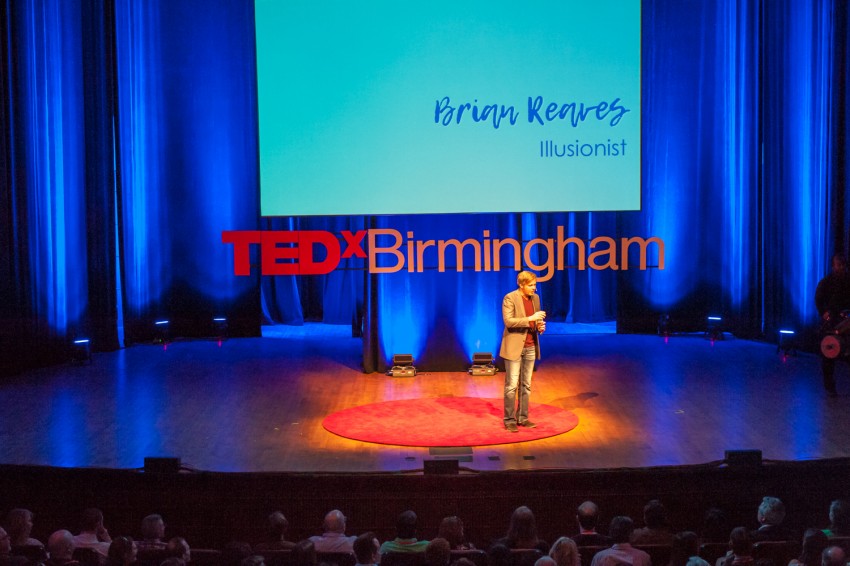 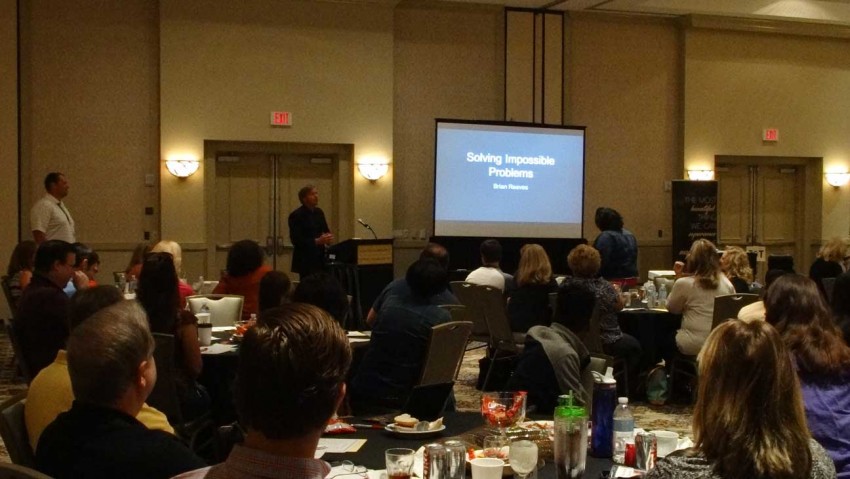 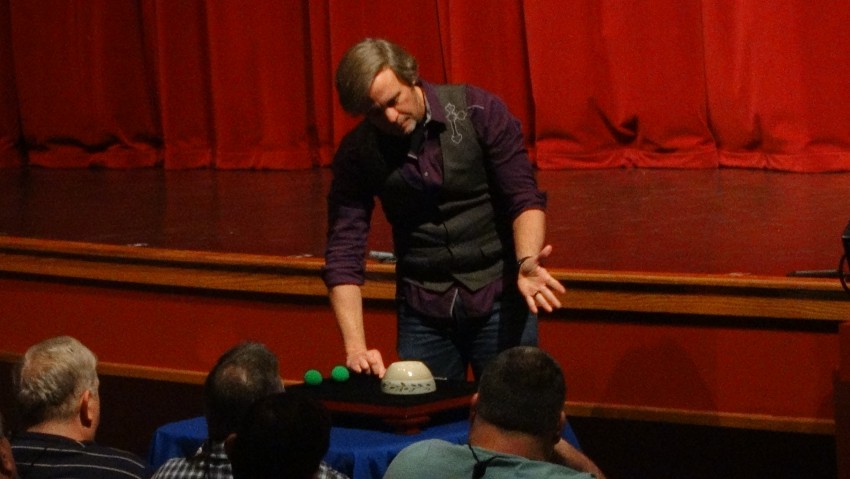 Beautiful magic for your event 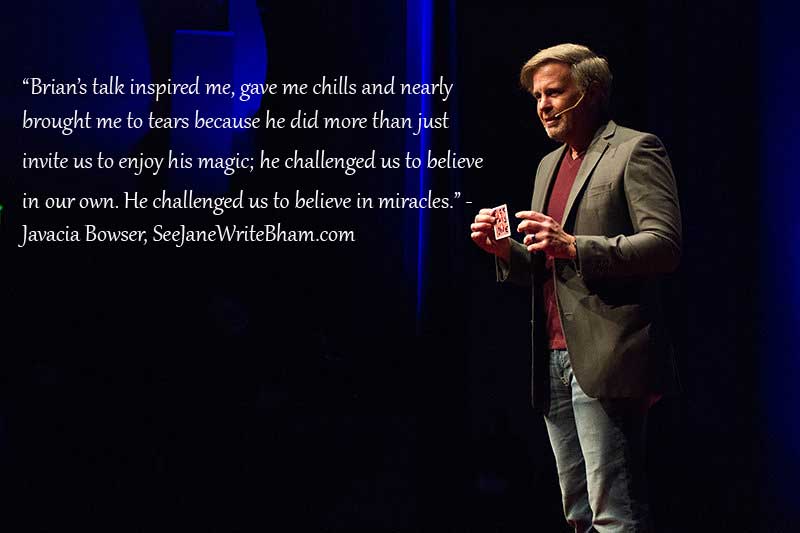 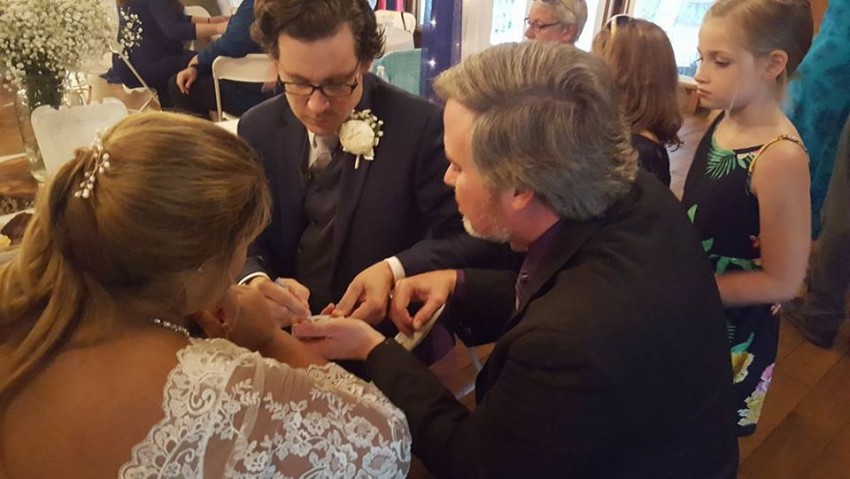 Keep your wedding guests entertained during the reception with magic 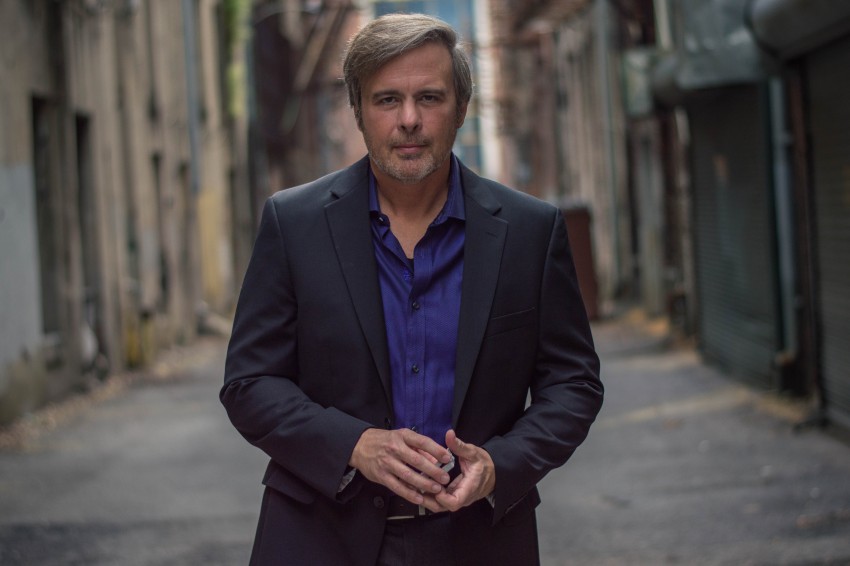 Five-time Birmingham Magician of the Year

Master Illusionist Brian Reaves provides professional illusions for your corporate, school, or church functions, private parties, or any other gatherings. Brian has been Birmingham "Magician of the Year" five times, is a Close-Up Champion, and the 2020 People's Choice Champion of the WCM. He was the opening speaker of TedxBirmingham 2017.

Brian is also an accomplished motivational speaker and trainer, using magic to help illustrate his presentation to make the message relevant and memorable. Brian can customize his presentation to include your company's logo or brand if possible and can work with you to create the exact message you are wanting to get across to your attendees.

He dazzled and amazed us with his talent.

He had a hard show because of the language barrier but did a fabulous job.

Thank you for having me there! I had a great time!

Very engaging with the audience. My residents loved to watch and even want to have him back for another show! Great Job Brian!

Thank you so much for having me out there! Your facility is absolutely beautiful and your residents were so kind and fun to perform for!

Our students were very please - he was very punctual.

Feedback from attendees was awesome! Said Brian was entertaining, professional and left them wondering how he was able to do what he did.

Thank you for the kind review and for the opportunity to entertain your group!

Brian’s performance was clean, funny, and kept everyone engaged for the entire show. Thank you for coming and performing at the event!

Thank you so much for the kind review and for having us there at your Christmas party, Jonathan! We had a great time and look forward to working with you again in the future!

Brian performed for our Corporate End of Year Celebration lunch for our employees. We had an audience of 300+ and ALL were entertained and had a wonderful time. Lots of laughter and enjoyment. A truly magical event!! Thank You Brian!!

Thank you so much for your hospitality during the event and your kind review! They were so much fun to perform for and loved to laugh. We had a great time and look forward to working with your team again in the future!

The group at my event were mostly college students, a tough crowd to entertain with all the technology around them. These students were mesmerized and loved the personal touch Mr. Reaves added to the show.

Thank you so much for having me there! It was just as much fun for me as it was for them!

Brian Reaves was absolutely amazing for our Volunteer Recognition Luncheon. Our crowd was full of senior adults 55 year of age and older. He kept everyone highly entertained with laughs, tricks, and even brought up a few our volunteers to get involved with his show. I would recommend him for anyone in need of entertainment for all ages. We have had several of our volunteers give feedback complimenting how much they enjoyed his show.

Thank you so much for your kind review, Samantha! I had a wonderful time with your volunteers, and they truly made the show with their willingness to be a part of it!

Very nice and professional. Love the way he was able to be flexible and move around and entertain the other associate.. Great performer

For a walk-around, close-up event, you can expect incredible, award-winning magic that fully involves the audience and draws a crowd. For a trade show booth, I will draw a crowd to your booth and direct them toward your products, including incorporating your logo and slogans wherever possible.

For a parlor show, comedy magic show, or mentalist show, the evening will include a variety of magic specifically chosen for that event and audience. There will be a lot of audience interaction throughout the show and we will do all we can to showcase your audience members with moments that make them the stars. We will not intentionally embarrass any member of your audience, so you can feel safe the comedy will be appropriate for your group.

For motivational speaking jobs, I have had over 20 years of experience as a corporate trainer and public speaking, and know how to keep your audience's attention and get your message across. This is not some long, boring speech, but an interactive experience using magic to illustrate points throughout the presentation.

For a school, library, or church function, I will keep your kids involved in the show while getting across any message you want to convey. I will work with you to incorporate any theme or message you'd like into the show and illusions as much as possible.

One lazy afternoon in a local restaurant, Brian watched with amazement as a co-worker did a few card tricks. It was his first introduction to close-up magic and became an obsession. A late-night trip to a bookstore put his first magic book in his hands, and the learning began.

Twenty-plus years later, the love for magic is still going strong. Along the way, Brian has won awards and accolades from fellow magicians and spectators alike while leaving people with the same sense of wonder he felt when he saw that first card trick.

Brian was awarded "Magician of the Year" five times from the International Brotherhood of Magicians Ring 35 in Birmingham, becoming the first five-time winner in the history of the IBM Ring 35. Brian is the past President of the IBM Ring 35 Magic City Magic Club. Brian is also an internationally-recognized close-up champion and the 2020 People's Choice Champion for the WCM in Tennessee. In 2021, he won awards for both his stage and close-up shows at the WCM.

In March 2017, Brian was the opening speaker for Tedx Birmingham, bringing his magic-infused speaking to a whole new audience. He was voted an audience favorite by those in attendance.

Brian performs for private parties, churches, libraries, business events, trade shows, and comedy clubs. His vast background in magic allows him the ability to create the perfect set for your particular event.

He is also a highly sought-after motivational speaker, bringing a magic touch to the topic at hand. He has over 20 years of experience in public speaking and is able to make even the most difficult topic memorable.

He has carefully crafted every show for the individual moment. His parlor show has received rave reviews from audiences. For one hour, they are taken through some of the most intense and entertaining magic performed today, with clean comedic moments involving as much of the audience as possible to make them the stars of the show.

Whether you are looking for someone to add a few moments of pleasant entertainment to your next dinner party or Christmas party, or would like to make your wedding reception or trade show booth even more magical, Brian has just the thing for quality family entertainment in those moments.

For walk-around magic for an event or trade show booth, I will work with the area.

For a parlor show or mentalism show for a medium-size crowd, I will need an area of about 8 feet by 8 feet minimum to set up and move around. The more space I have to work with, the better your show will be. The area needs to be well-lit. I can supply a sound system if one is needed as long I know ahead of time.

If the job is a motivational speaking event, I will need a projector for PowerPoint presentation. If the crowd is larger than 50 people, I would prefer a microphone and sound system (and will gladly supply one if needed at no additional cost) so that everyone can clearly hear what's being said. This helps everyone to stay on track together.

Projector (for motivational speaking jobs only)