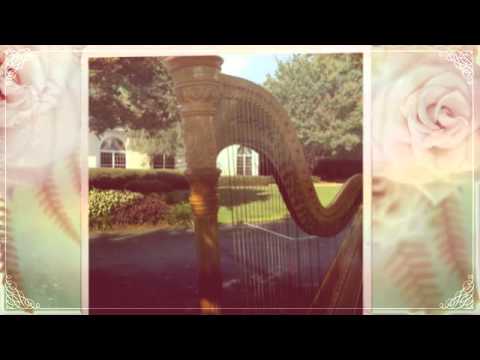 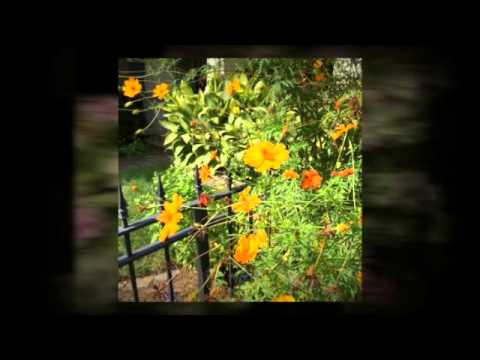 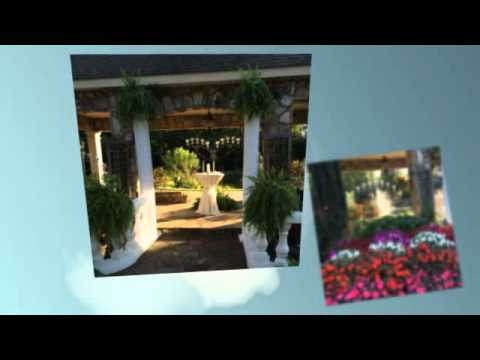 An Outdoor Wedding at Glendalough Manor 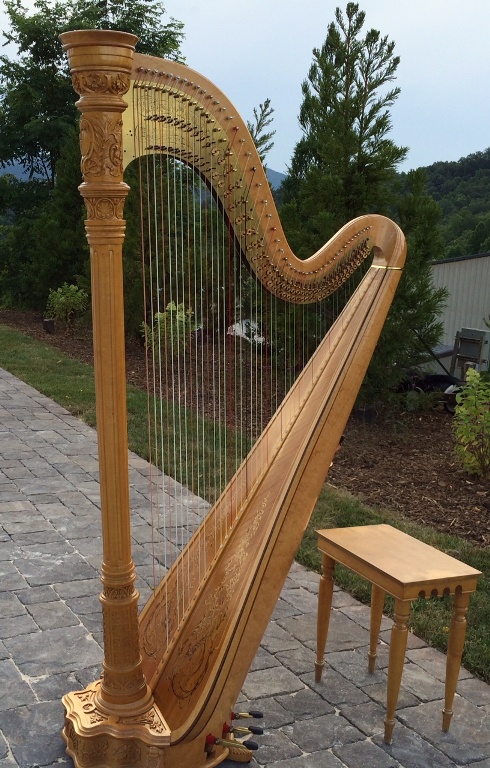 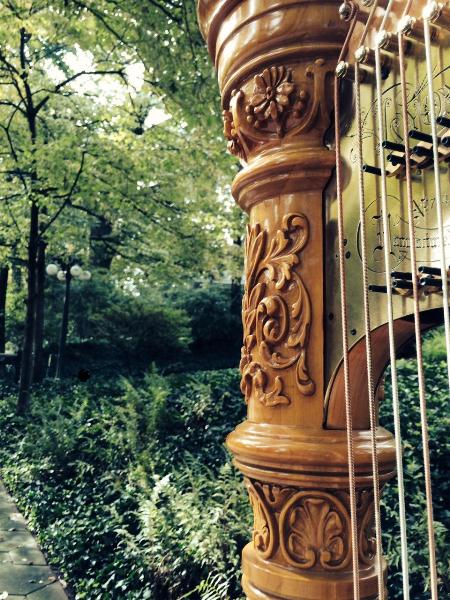 The harp has a hand-carved, Baroque-style column. 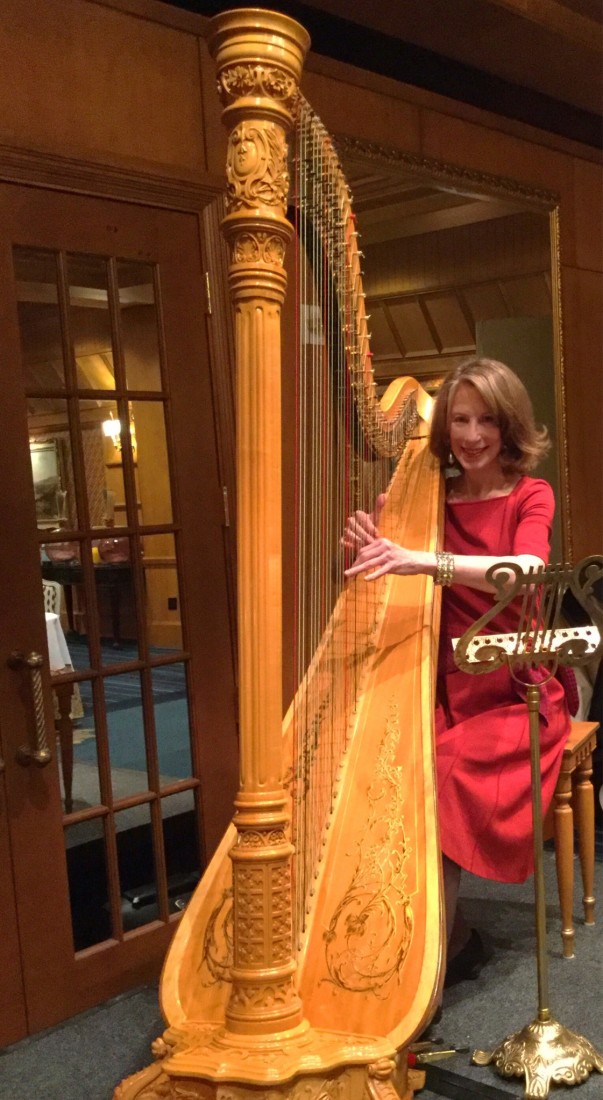 Afternoon Tea at The Ritz-Carlton Atlanta 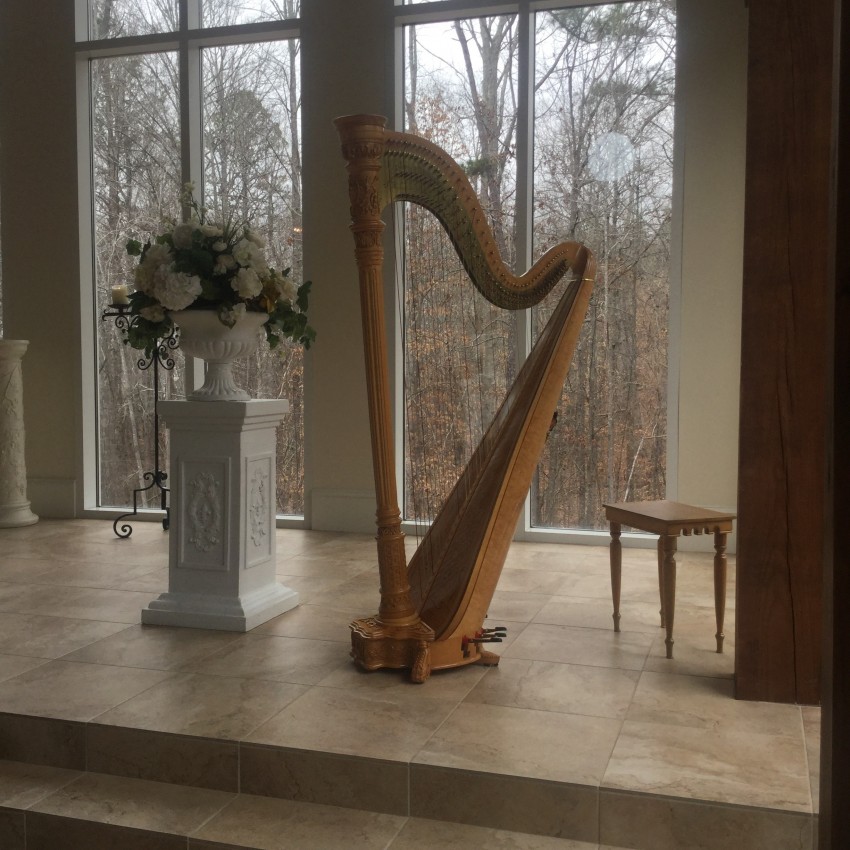 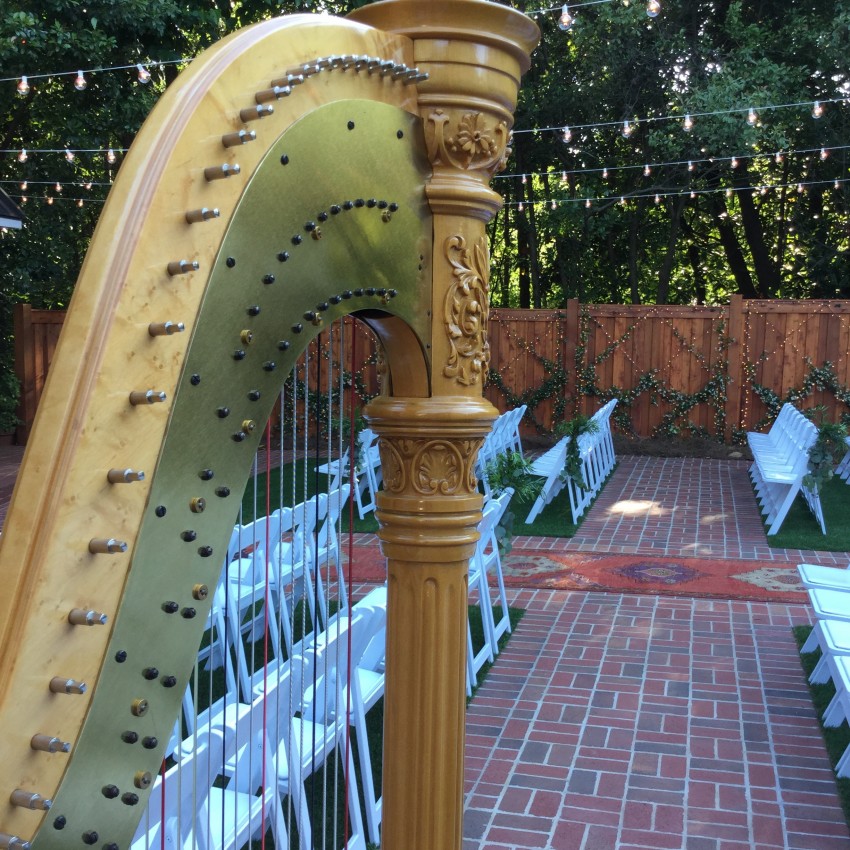 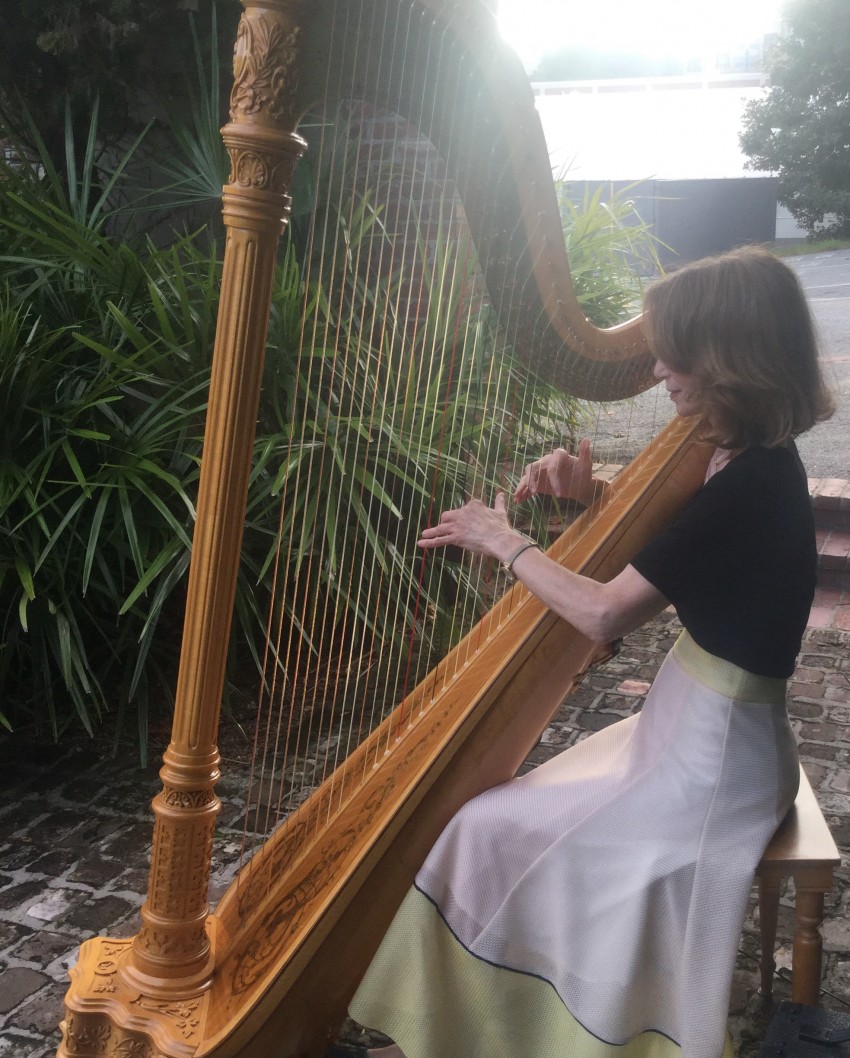 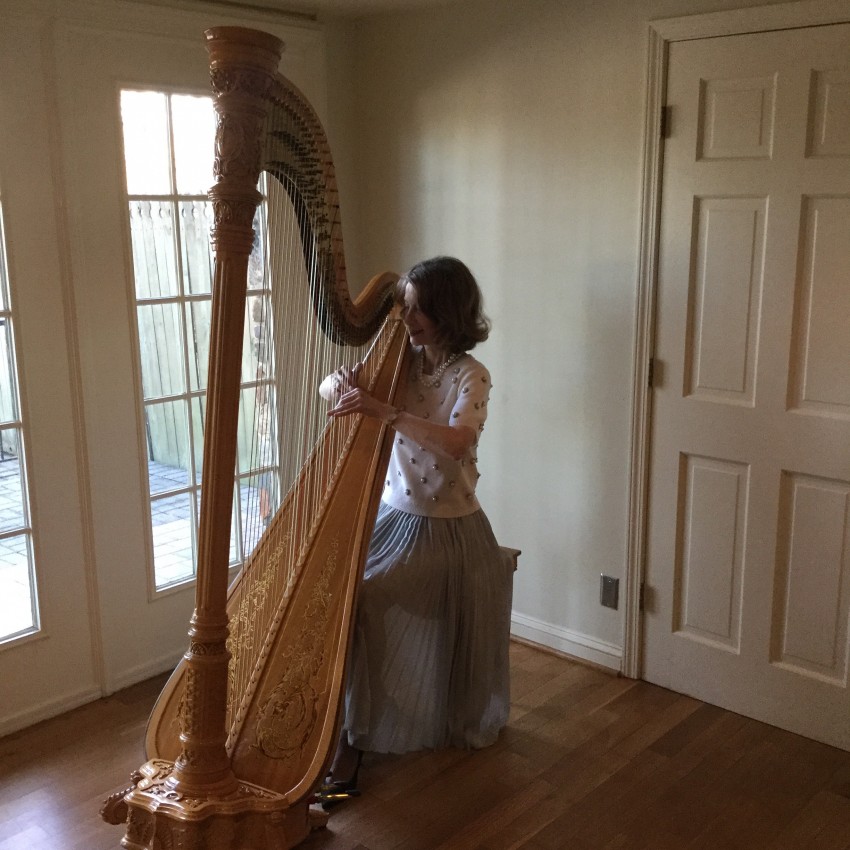 Wedding at The Houston Mill House

Brenda Street's harp music adds a special quality to weddings, receptions, dinners, parties, and other events. Her large repertoire is ever-expanding, and she is able to provide clients with just the ambiance and atmosphere they have envisioned for their special occasion. Whether you need elegant harp music for a wedding prelude and ceremony or a varied playlist of Broadway tunes and jazzy standards for a cocktail reception, Brenda is able to customize a program that will meet and even surpass your expectations. She is a client-oriented professional of the highest order.

Brenda performed at the reception following my partners Memorial Service. Her selection of songs made for an exquisite event.

Tim, thank you for these kind words. You planned an elegant, meaningful tribute, and I appreciate so much being asked to participate. Best, warmest wishes to you, and, again, thank you.
—Brenda

Brenda Street played her harp during our ceremony, and we could not be happier with her beautiful playing style. It fit SO perfectly with our garden, fairy-tale wedding, and the guests kept commenting through the night how great the music was! Not only this, but she is very professional, and organized with everything. She knows what she's doing, and we'd book her again if we ever need a harpist again!!! Thank you!!!!

Jessica, thank you so much! You had planned everything perfectly, and it was truly fairy-tale in all aspects. I loved being a part of your wedding, and I wish the two of you years and years of happiness together. Again, my thanks to you for having thought to use harp music.
—Brenda

Brittany, thank you so much for these kind words. Your wedding was beautiful, and I’m grateful for your having asked me to participate. Sending the two of you warmest wishes for years and years of continued happiness,
—Brenda

Her playing created an musical atmosphere of Perfect Love. If you find a harpist that can play as beautifully as Brenda Street, Kiss the feet of Jesus, because you are in Heaven.

Just what we needed - she was set up and playing before people arrived. Very sweet and kind

Ewa, thank you so much. I really appreciate having been asked to be a part of this lovely Celebration of Life. Best, warmest wishes to you, family, and friends.
—Brenda

Stunning music by a consummate professional

It was a delight to work with Brenda Street and I would highly recommend her. We easily communicated with her to select music prior to the event. She then sent a follow-up note just prior to our event. She arrived early, set up, and quickly started playing an exquisite harp. She provided seamless music for our event. Her beautiful live harp music was the perfect touch for our memorial service and life celebration.

Leeann, thank you so much. It was wonderful being with you all for the beautiful and quite touching life celebration, and I want you to know how much I appreciate your kindness and your generosity before, during, and after the event. Along with my thanks, I send warmest wishes to you and your entire family for a peaceful and meaningful holiday season.
Happiness and good health in the new year,
Brenda

It's been several days and we still don't have the words to adequately describe the element of beauty and elegance that Brenda added through the passion of her music and her personalized service for Sam and me. We literally met Brenda for the first time on the day of our engagement party and she played and gave us both big hugs as she had known us for years! Our only regret was that she didn't play longer!

Russell, your review means so much to me. Thank you! It was a true pleasure to play for you, Sam, and your guests, and I want you to know how much I appreciate being asked to be there. Wishing the two of you happiness always, and, again, thank you,
—Brenda

Brenda is always a joy to have and our residents absolutely love her!

Beverly, thank you so much! You have all been so welcoming and kind to me, and I really appreciate every opportunity to come and play for your residents. Warmest regards to all,
Brenda

Ms. Street was a phenomenal addition to our wedding. She was professional, on time and easy to work with. We had guest of varying ages from baby boomers to millennials and everyone enjoyed the beautiful harp music!

Ms. Irwin, thank you so much for this wonderful review! The beauty of your wedding—especially the people in it—was truly inspiring. Thank you for having chosen harp music for your special day. I will always remember the joy and the obvious love that filled the room.

We had such a wonderful and beautiful experience with Brenda. Her playing was absolutely magical for our spring garden party. She showed up on time and was completely professional throughout her performance, even stopping to talk to guests about her harp or herself. We would definitely recommend Brenda and plan to ask her to play at other events. We are so grateful to her!

Julianna, thank you so much for these kind words. It was a true pleasure for me to play for your family and guests, and I will never forget the beauty and elegance of that exquisite setting. Sending best, warmest wishes along with sincere thanks to you and your family,
—Brenda

Brenda is extremely talented and very professional! I can’t wait for an opportunity to have her at another event! Thank you!!

Maria, thank you so much! You all did a great job planning a function that everyone seemed to enjoy very much. I can’t thank you enough for having thought to add harp music, and I will certainly look forward to future events. Wishing you and everyone a safe and happy holiday season! Again, thank you.
—Brenda

Brenda's performance at my sister's 40th birthday party far exceeded my expectations on how it would enhance the intimate dinner experience. She is a true professional and her repertoire is so large we really never had to speak on the phone in detail before she arrived. I am so glad I found her on gig salad. This is my first time using this service and working with Brenda made it very smooth. I HIGHLY recommed her for your event. Enjoy!

Amber, it was a sheer pleasure for me to have been among your friends and family members at the birthday party. Thank you so much for having chosen harp music as a surprise for the event. The playlist you provided me with was just perfect--all selections that I love and enjoy playing--and I appreciate your having taken the time to choose just what you knew everyone would enjoy hearing. May you and your family enjoy many more happy times together! Thank you again for everything.
--Brenda

Brenda did a superbly wonderful job with her Harp for our daughters 16 year old birthday party.. her music was so suiting and beautiful to listen to.

This was a beautiful party, and I can't thank you enough for having asked me to participate! Sending you and your entire family warmest wishes and heartfelt thanks, and wishing your beautiful daughter many, many more happy birthday celebrations.
--Brenda

Brenda brought warmth, charm and serenity to my wedding. Her sound was relaxing to the ear and intimate to the heart. Her songs told a true story of how we feel as husband and wife, we thank you for sharing our special moment!

Brittany, I cannot thank you enough for your kind words. Your wedding was so special, and I just had the nicest feeling being there. It was a beautiful experience for me, and I am so grateful to you for having asked me to participate. Am wishing the two of you many, many years of happiness together. Best, warmest wishes always,
Brenda

Ms. Street was a joy to work with! I booked Ms. Street for my daughters wedding in December. She did a phenomenal job and played such beautiful music with a magical presentation. My daughter was extremely happy. I highly recommend Ms. Street.

Brenda Street prepares a written contract for every engagement. This notes in detail what she will provide, the time, the fee, etc. It is signed by both her and the client.
In general, she arrives one hour before she is to begin playing, which allows enough time to set up and to be ready to begin around 15 minutes before scheduled. She is always professionally attired, having verfied this with the client in advance. She plays any specific requests that the client has made. If some of the playlist is left to her judgment, she plays repertoire that is sure to please and is appropriate. Guests invariably have questions about the harp, and Brenda is happy to take a minute to interact and to play any special requests they might have. Clients are welcome to phone, email, and text Brenda as much as needed before an event. She responds to all within the same day.

Beginning at age eleven in her native Mississippi, Brenda Street studied classical piano for seven years with Curtis Institute graduate Sara E. McAllister. Having decided to learn the harp, she studied privately for 6 years with Atlanta Symphony harpist Judith Beattie, followed by one year of jazz theory with Atlanta musician Ted Howe, former instructor at the Berklee School of Music. She holds a Bachelor of Arts Degree from Millsaps College and a Master's Degree from Vanderbilt University's Peabody College of Education.

With years of experience as a professional freelance harpist, Brenda has played countless weddings, parties and other private events in the Atlanta area. She has also fulfilled longterm engagements playing dinner/background music in hotels and restaurants both in the United States and in Switzerland (e.g. "The Abbey Restaurant" in Atlanta, GA; "The Tobacco Company Restaurant" in Richmond, VA; "The Hotel Metropole" in Geneva, Switzerland; and the world-renowned "Palace Hotel" in Gstaad, Switzerland.)

With both classical and pop/jazz training, Brenda is a quite versatile solo performer, playing Bach and Mozart as well as rhythmic pop and Latin selections. Her acoustic concert grand harp produces enough volume on its own for groups of up to 75 guests. For larger functions, Brenda uses a small amplifier with a mic fitted inside the harp.

Brenda Street enjoys what she does very much, and it is her goal to provide her clients with a top-notch performance delivered in the most professional manner. She enjoys a busy career playing a large variety of engagements not only in Atlanta, but throughout the state of Georgia and central/eastern Alabama.

In general, harpists need a solid, firm, level and flat surface on which to set up. The harp cannot be subjected to extreme temperatures or to moisture. I play for outdoor functions during the months of March-October or mid-November. I do not require electricity, as the amplifier that I sometimes use is battery-powered.

The late Alice Chaifoux, former harpist with the Cleveland Orchestra. Studio harpist Stella Castellucci of Los Angeles, California, for her wonderful arrangement of popular and jazz pieces for the harp. Also the late professional harpist Eleanor Fell, who played at the Rainbow Room in New York for years. The piano music of the late George Shearing has had an influence on my style of playing.

No additional equipment is needed. I will need a flat, level surface, approximately 6'x4' on which to set up.