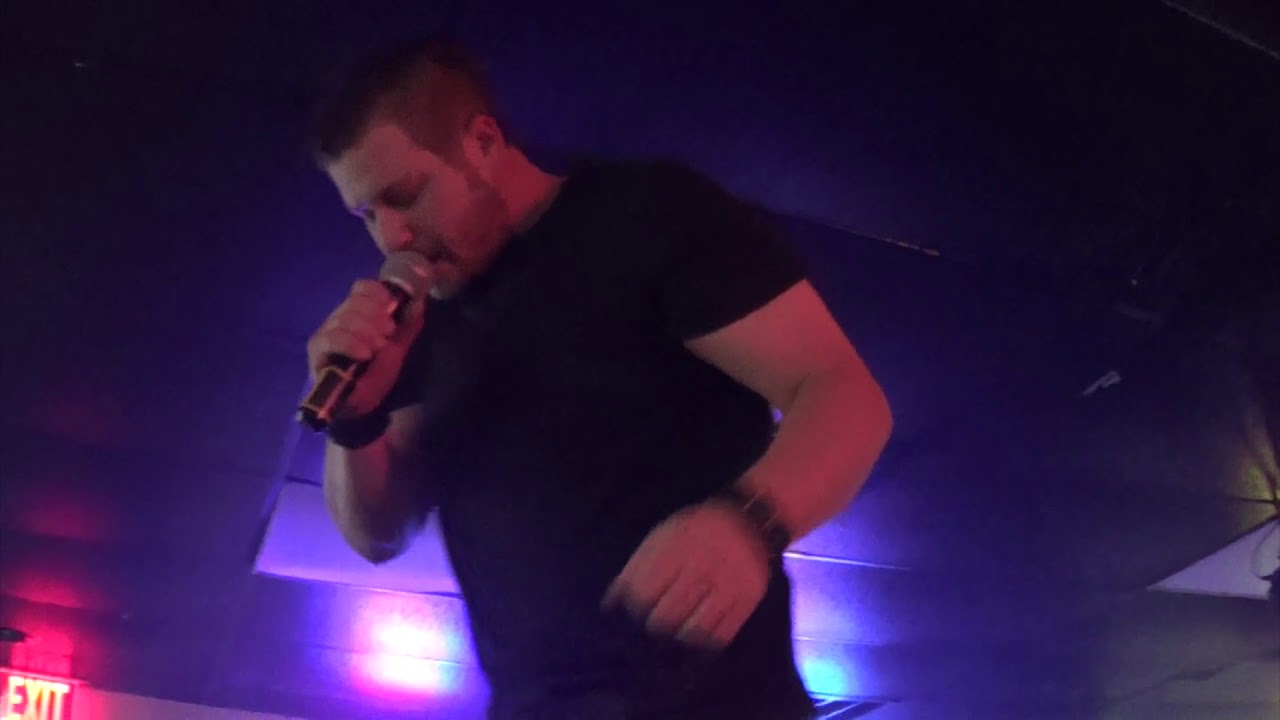 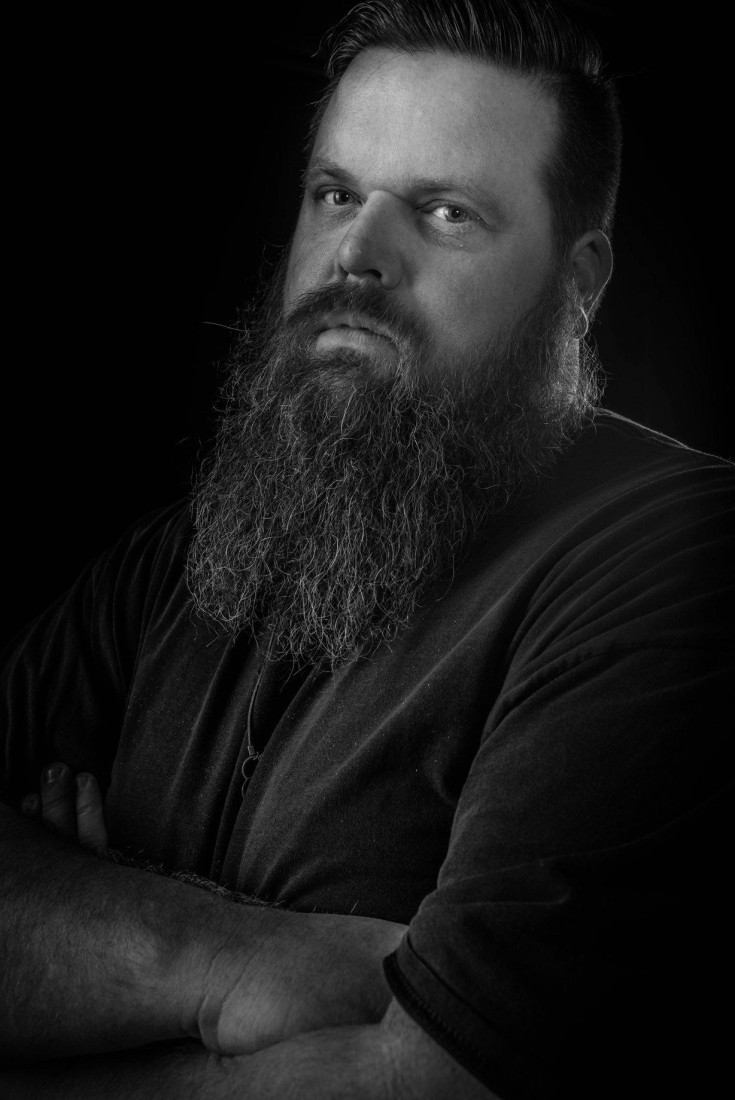 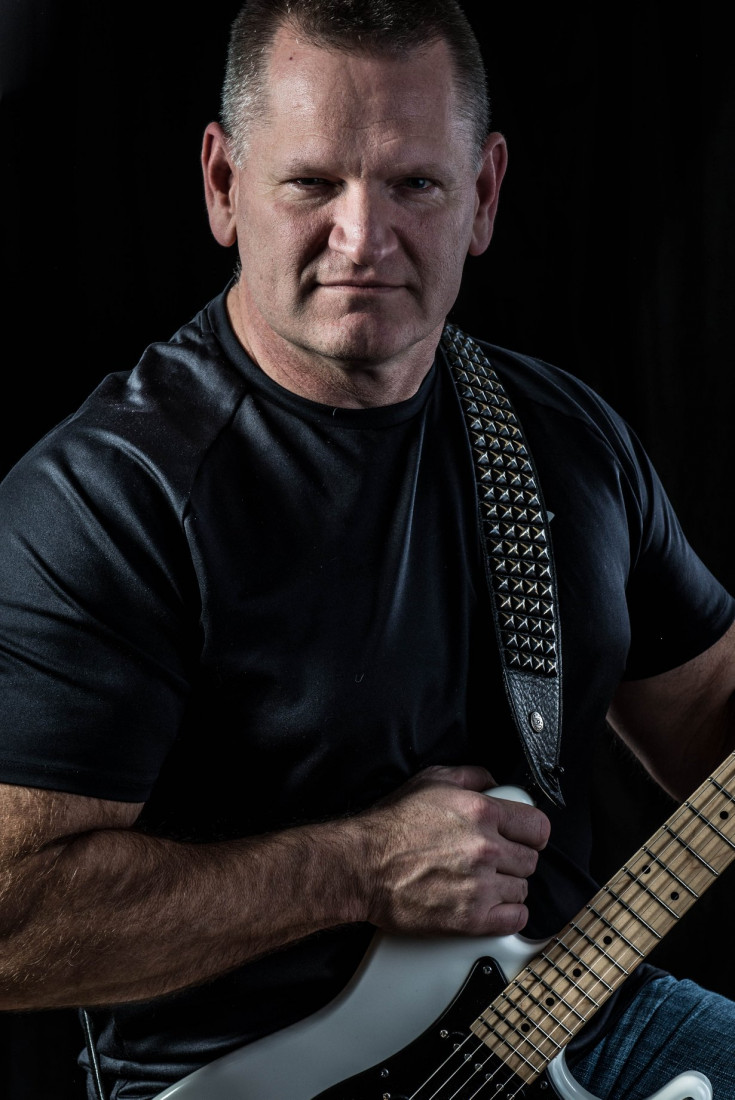 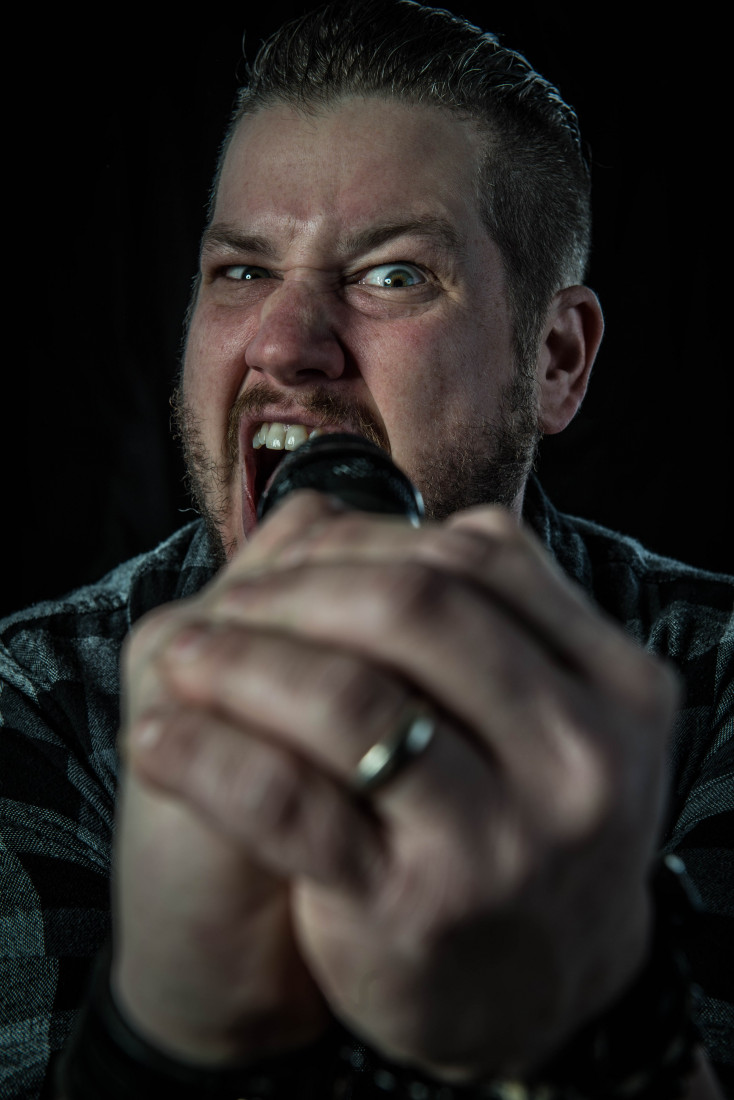 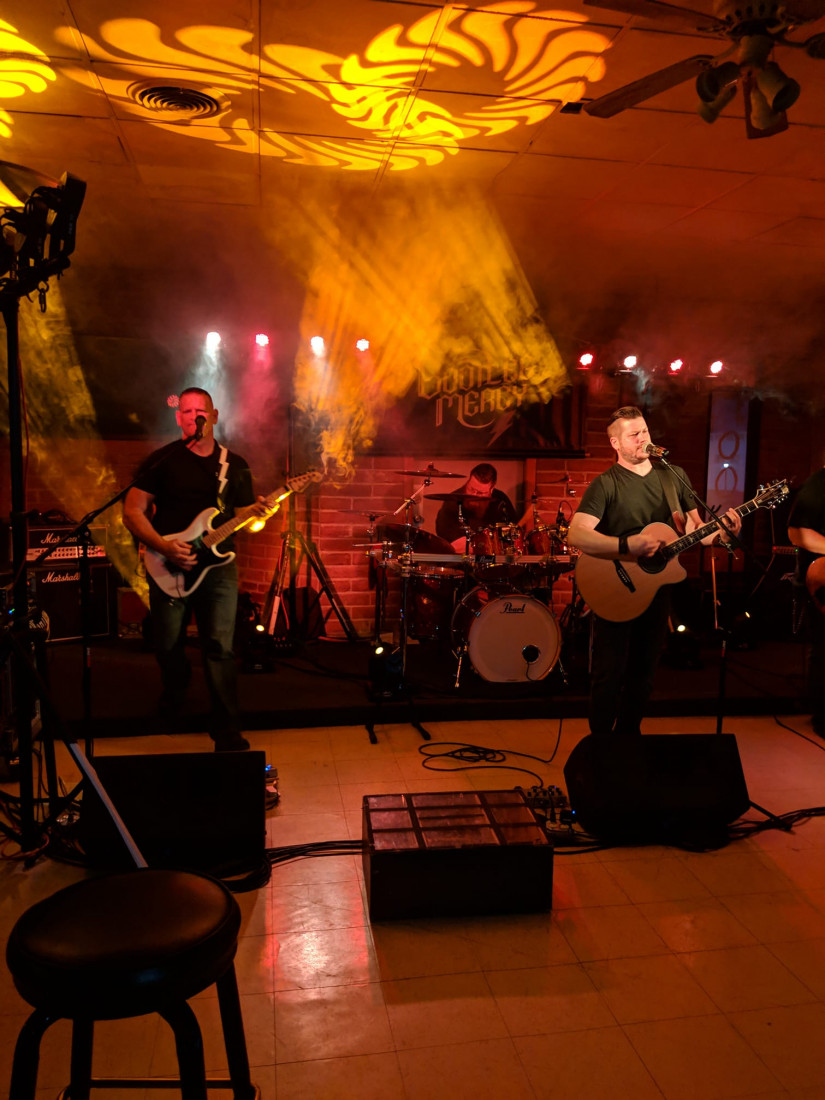 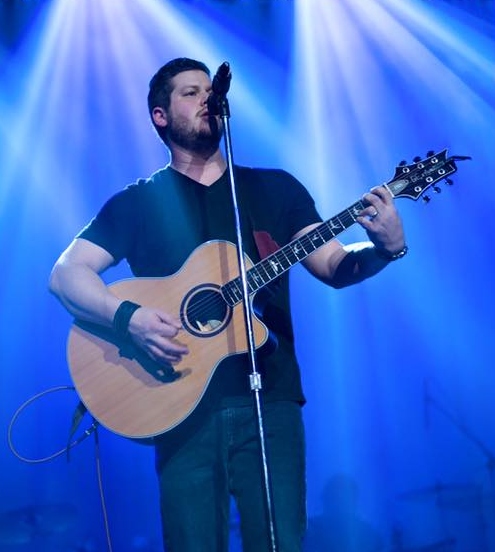 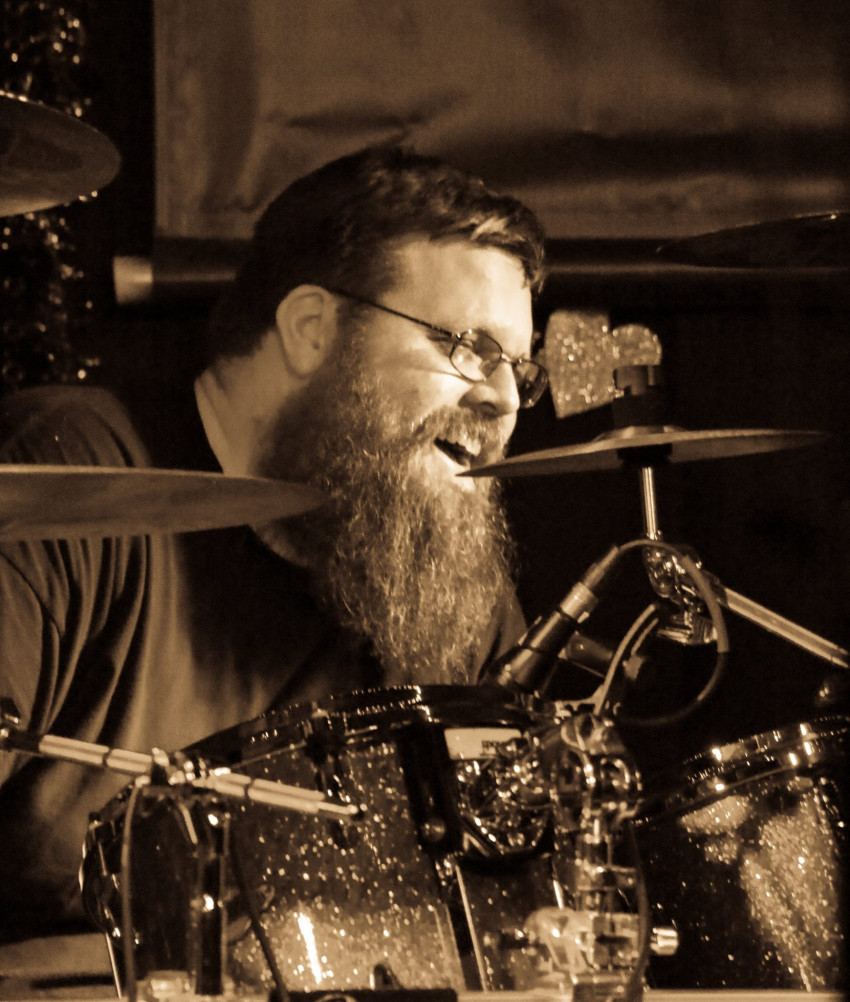 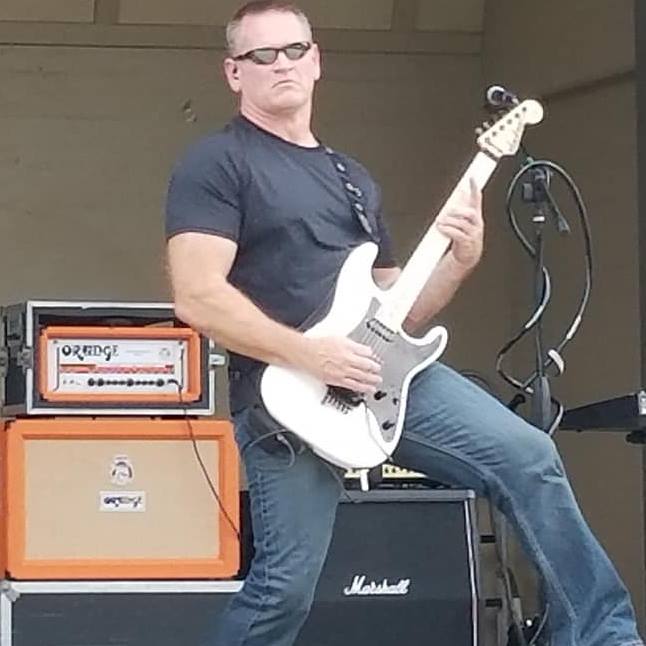 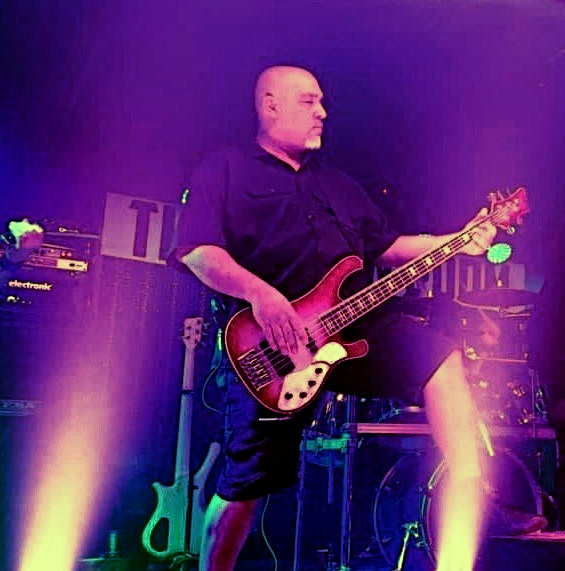 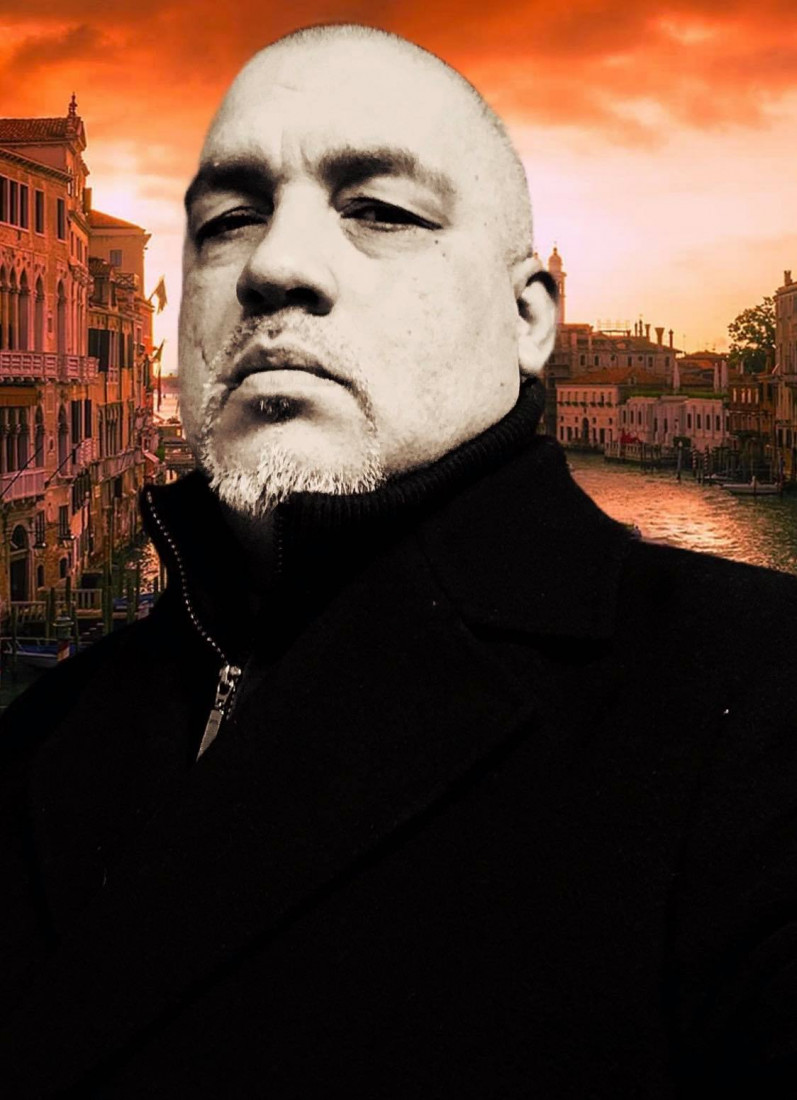 Bootleg Mercy is a four-piece Rock Band specializing in energetic live shows. If you're looking for the run-of-the-mill bar band...keep looking.

Be the first to review Bootleg Mercy

From the time we arrive until the time we leave, we provide a professional, business-like approach to our setup and performance presence. During our shows, we avoid the usual "schtick" and play the music you want to hear, the way it should be played, without the annoying stage banter and extended breaks between songs/sets.

You hired a band to play music and THAT is what we do.

BOOTLEG MERCY…IT’S LIKE MERCY, ONLY THE SECRET, STOLEN KIND!
Reminiscent of the backwoods moonshine bootleggers of the prohibition era, the guys in Bootleg Mercy are hauling a trunk-load of some of the best hard rock you’ve never heard. Roaming the backstreets of Kansas, the boys take no prisoners with their unique brand of music.
What began as a 90s cover band, Bootleg Mercy took a detour into the world of writing and arranging their own material which has been an amazing thing. Melding influences both old and new, Bootleg Mercy brings together the familiar sounds of the past with something fresh and interesting.

OUR SOUND
Are you looking to rock? Check. Are you looking for a band to party with? Check. Are you looking for a band that sounds like everybody else? We can’t help you there but if you want to see and hear something fresh and exciting, then look no further! The band’s sound fuses heavy-hitting hard rock with compelling arrangements, soaring, catchy melodies, and thought-provoking lyrics. When combined with their energetic live performances and individual musical ability, this band packs a solid punch.

OUR MEMBERS
The original band members met through a combination of Craig’s List and Facebook Messenger…romantic! They all shared a love for performing live and traveled the area surprising club owners and patrons alike with their musicality. The band consists of Rich Thompson (lead vocals/guitar), Curtis Nightingale (lead guitar/vocals), Jeff Butler (Bass), and Erick Winebrenner (drums).

OUR PARTY
Since 2012, Bootleg Mercy had been performing covers from artists like Alice in Chains, STP, Pearl Jam, and Tool. In 2020, the band decided to switch it up and begin writing their own material. What has developed is nothing short of amazing.

BUT ENOUGH ABOUT US, WHAT DO THE EXPERTS SAY…?
"Great sounding song with irresistible dynamics, great atmosphere, and super addictive vibes all along the way. I also see huge commercial potential in this song."
- Metalhead Community Magazine
__

“Calling something ‘American Radio Rock’ can often seem like an insult and, a lot of the time, it is due to the lack of creativity and ‘safety’ that can be found in the style. As with everything though, there are always parts that stand above the rest. For Bootleg Mercy it is their song structure that sets them apart on ‘The Trees Are Listening’. There are elements that are a bit standard rock, parts that sound a bit Shinedown-esque, thankfully though they aren’t the parts that stand out. The anthemic chorus is a major highlight but for me, it’s the transitions and variation on the song that sets it above its peers. This is not reinventing the rock wheel, it is merely honing it expertly.”
- Mind Noise Network
__

ACT NOW!
If you haven’t already, you need to head over and check out whatever back road, musical activity the boys in Bootleg Mercy are up to now on their various social media sites.

We provide everything we will need. However, if your setting provides sound reinforcement/lighting, this may reduce the cost to you.

Machine Head
Sex Type Thing
Alive
Creep
Interstate Love Song
Far Behind
What I got
Higher Ground
Man In The Box
Santa Monica
Hurricane
Zero
If You Could Only See
Heart-Shaped Box
Trees Are Listening*
Evenflow
Them Bones
Sober
Cold Shot
Pride and Joy
Mutha
My Own Prison
Own Worst Enemy
Cumbersome
Last Dance with Mary Jane
I Alone
Plush
Hands to Yourself
Dead And Bloated
Come As You Are
Fallen*
Hey Man, Nice Shot
Spoonman
Hard To Handle
Tomorrow
Crackerman
Better Man
Blue on Black
Caress Me Down
Mudshovel
The Veil*
Killing In The Name Of

We collectively draw from many bands and genres. To list just a few might look like this:
- Soundgarden
- Alice in Chains
- Pearl Jam
- STP
And into today's music.

We will make it work. Give us a call.