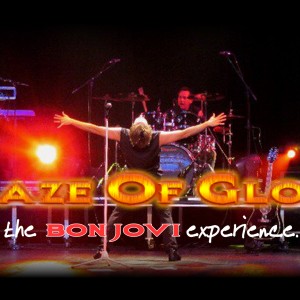 Providing the Bon Jovi experience nationally and internationally since 2006, this is as close to the real Bon Jovi as you'll get without a few hundered k!

Blaze of Glory kicks out all of your favorite Bon Jovi hits from the 80's, 90's and 00's! This group of ultra-talented musicians capture the overall look, sound and feel of a current Bon Jovi concert with all the energy and emotion you expect.

Many an audience member has been heard to say that they actually felt they were watching a true Bon Jovi performance!

Be the first to review Blaze of Glory THE Bon Jovi experience...

introducing Blaze Of Glory...
.
Blaze of Glory: the Bon Jovi Experience, is a band formed in January 2007 and based in Dallas, Texas. Made up of a talented group of experienced musicians, this band pays homage to one of the greatest rock bands to come out of the 20th century.
.
Blaze of Glory features the talents of Trae Doss, channeling the signature vocals and larger-than-life presence of Jon Bon Jovi.
.
At his right hand, guitarist Roy Lee Nelson delivers the soulful guitar and vocal stylings of Richie Sambora.
.
Bassist Dave Harvey flawlessly emulates the tasteful, driving low end tones made famous by Hugh McDonald.
.
On keyboards, Boris Korol fills the sonic landscape with the textural artistry of Dave Bryan.
.
Finally, Kenny “Da Crusha” Schiumo brings to life the hard-hitting, solid rhythm of drummer Tico Torres.
.
.
The grouping of all this talent in one place enables Blaze of Glory to create a live show that leaves you wondering if perhaps you aren't actually seeing the real Bon Jovi. From your favorite rockin' tunes with the classic hooks, to those oh-so-sweet Bon Jovi love songs, Blaze of Glory delivers them all. You won't want to miss a single minute of Blaze of Glory's show, because it's guaranteed to be a party!